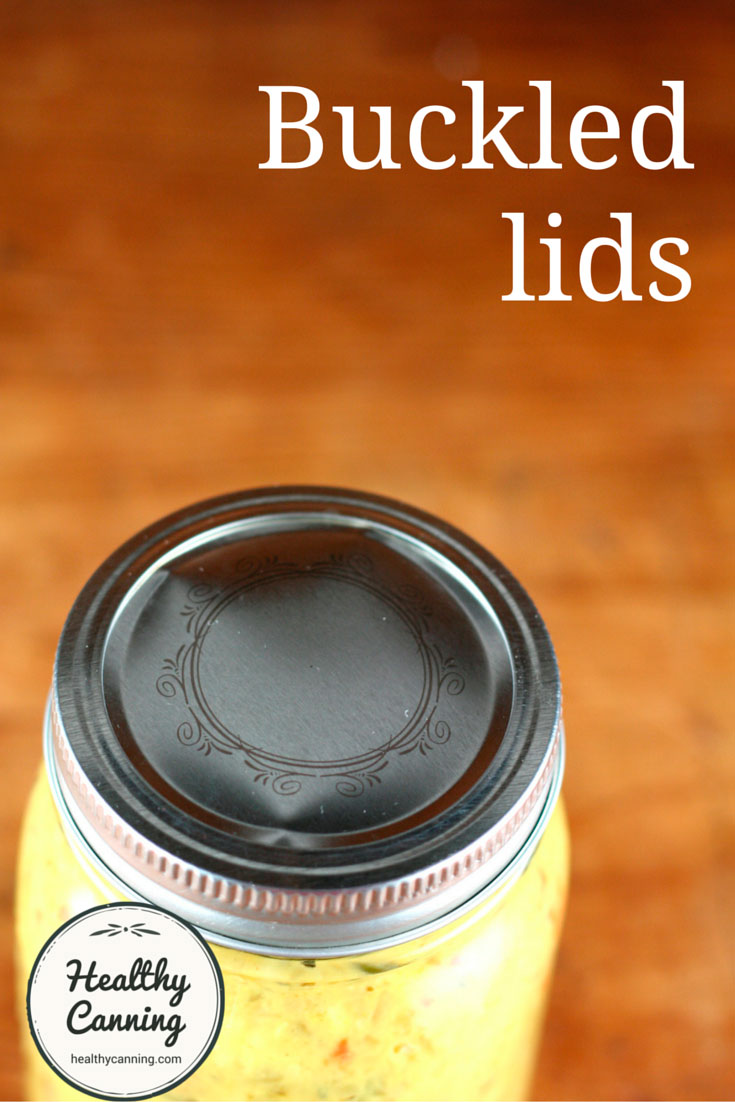 In modern home canning terms, a buckled lid is a permanently distorted metal lid on top a jar.

The jar should be treated as unsealed, even if it has sealed.

Note: this does not occur with closure systems such as Tattler or Weck, only metal lids.

There are a number of different factors that various experts have observed can cause this. Let’s hear what they have to say:

The All-American canner people give us a reasonable list to start with.

What causes the lids to buckle?
A. Buckling lids may be due to a number of things:
1) This problem may be caused by tightening the jar rings too tightly before processing the jars. During processing, the flexible metal lid permits the jar to exhaust air, and rings that are too tight will not allow the air to escape during processing.
2) Not following the correct preheating process for the brand of lids used. [Ed: note Ball clarified in 2015 that no lid heating at all is needed]
3) Filling the jars too full.
4) Using the raw-pack method for starchy vegetables.
5) A steam leak from the pressure canner lid.
6) Cooling the pressure canner with water or cool air.
7) Using a jar with a mouth that is too large for the lid (such as a mayonnaise jar). [1] Cooking and Canning with the All-American Pressure Cooker / Canner 2008. Page 41. 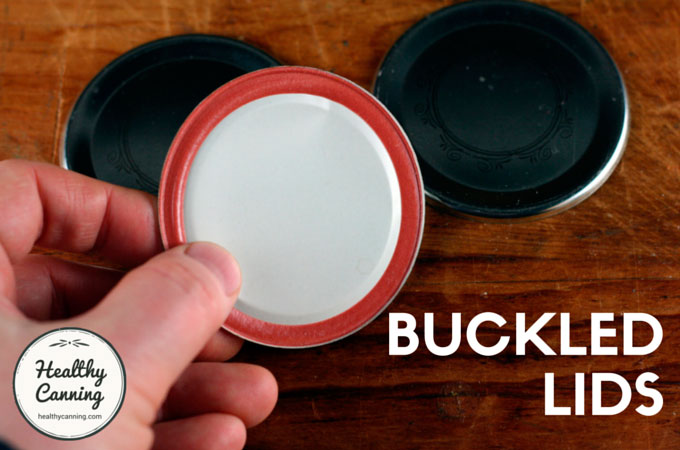 Over tightening [canning rings] also may cause lids to buckle and jars to break, especially with raw-packed, pressure-processed food. [2]USDA Guide 2015, Page 1-16

Early USDA researchers in the 1920s noted that raw-packed corn was especially prone to causing buckling:

…. During cooking, corn swells considerably, and unless heat is applied in some form before the corn is canned difficulties may be encountered. In tin, the cans may buckle; and when glass jars are used, breakage from internal pressure is often considerable. This swelling is due partly to gelatinizing of the starch, but mostly to the expansion of air held in the tissues or otherwise incorporated in the material.” [3] Magoon, C.A. and C.W. Culpepper. Scalding, Precooking, and Chilling as Preliminary Canning Operations. Washington, DC: USDA Bulletin No. 1265. 22 November 1924. Page 26. 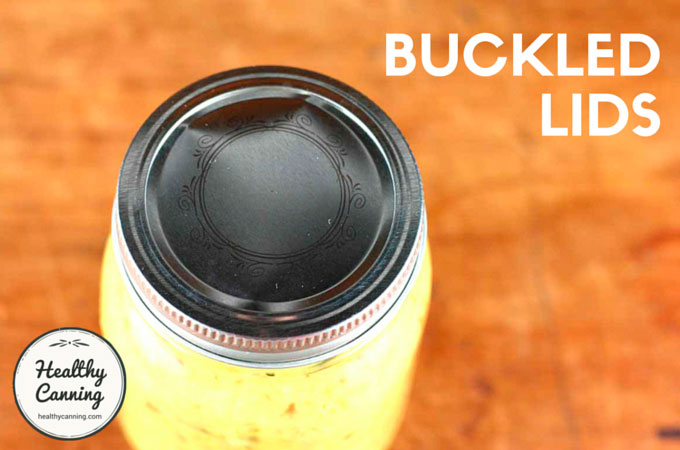 Buckling that is apparent immediately after heat processing is caused by application of the screw bands too tightly. Bernardin two-piece home canning lids are made in two pieces for a very important reason: to release pressure and vent air from the jar during heat processing. As the filled jar is heated, headspace pressure increases until excess air is vented from the jar. When the band is applied too tightly, there is no way for air to be exhausted from the jar. Consequently, the pressure build-up warps the lids and disrupts the seal formation. [4] Bernardin. FAQ. Accessed July 2016.

The University of Missouri Extension agrees that a common cause of buckled lids is too-tight canning rings:

During canning, air trapped in the headspace between the bottom of the lid and the top of the food is forced out of the jar. When lids are too tight, the air cannot easily escape so it forces its way out by deforming the lid. This leads to the buckling or crinkling effect.” [5] Hackert, Janet. Prevent buckling canning lids. University of Missouri Extension. August 2014. Accessed July 2016 at http://missourifamilies.org/features/foodsafetyarticles/fdsfty51.htm.

Boiling the metal lids before use

Boiling the lids before use softens the sealing compound too much which may prevent venting and result in a buckle or no seal.” [6]Ball. FAQ. Accessed July 2016 at https://www.freshpreserving.com/faqs.html.

Some metal canning lids now are being made in other countries.

These can be found sometimes at dollar and deep-discount stores, and may come supplied with brands of jars such as “Frutta del pratto.”

These lids may be silver, and, have patterns on them designed to imitate lids by other well-known canning lid providers such as Ball, Bernardin and Kerr.

The metal in the lids, however, is ultra thin, and buckles very easily. 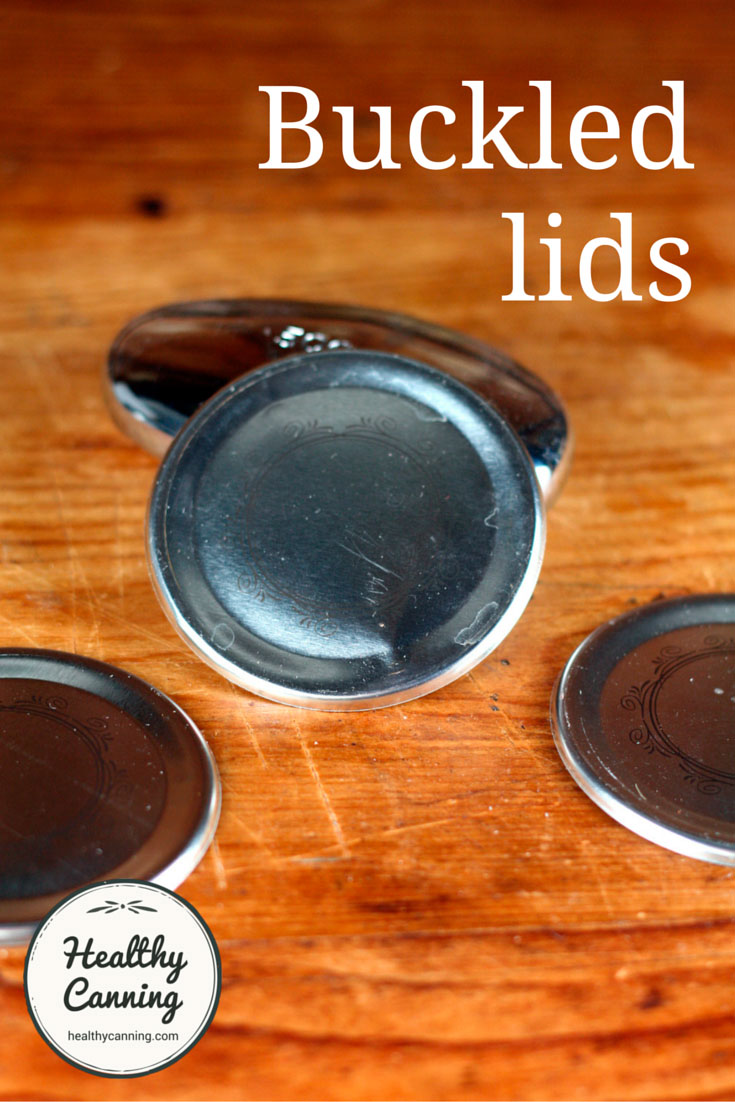 Metal lids can buckle on a filled jar in storage if the food in that jar was incorrectly processed.  If the canning ring was left on, the force of the gases inside the jar from the spoilage food may cause the lid to buckle.

Buckling that occurs during storage is caused by food spoilage. When heat processing is insufficient and does not destroy all spoilage microorganisms, food may spoil during storage. This spoilage produces gases inside the jar that forces the lid to bulge upward. This food should be discarded in a manner that neither humans nor animals will consume it. [7] Bernardin. FAQ. Accessed July 2016.

Food spoilage due to incorrect processing produces gases inside the jar that force the lid to buckle or unseal.”  [8]Ball. FAQ. Accessed July 2016 at https://www.freshpreserving.com/faqs.html.

If however the canning ring is removed, as is now recommended, the lid will simply come loose as a warning that something went wrong. 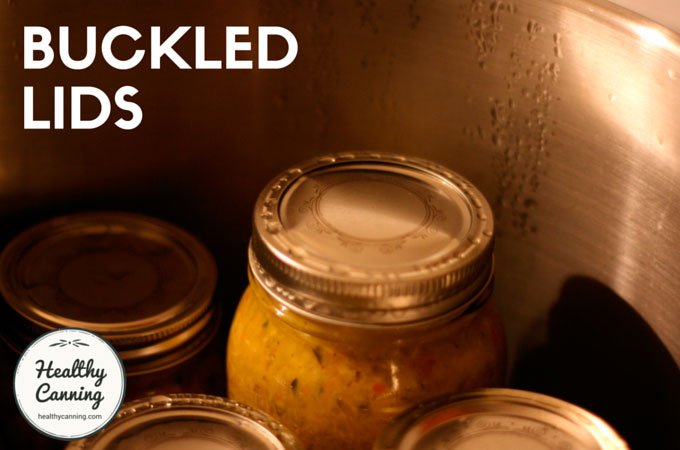 A buckled lid is one that is sealed but has a crease across a section or edge. Buckled lids do not occur with good canning practices, but are a sign that jars were not filled properly and/or lids were not properly tightened. These vacuum seals are likely to loosen during storage.” [9] Elizabeth L. Andress and Allison M. Oesterle. Judging Home Preserved Foods. Georgia: National Center for Home Food Preservation. 2003. Page 12.

University of Missouri Extension says not to even bother storing the jar:

The seal on a jar with a buckled lid has a very high failure rate so this food would not be safe to store.” [10] Hackert, Janet. Prevent buckling canning lids. University of Missouri Extension. August 2014. Accessed July 2016 at http://missourifamilies.org/features/foodsafetyarticles/fdsfty51.htm.

You may read some in forums some consumers saying that buckled-lid jars are fine, just store them at the front of the shelf, and them up first. But the experts say don’t even try that, as the failure rate is very high.

Healthy Canning tested storing one such jar, and can attest that such lids can just fail silently on you: the first notice you may have is a sudden swarm of breeding insects crawling all over a pantry shelf, requiring all jars to be hauled off and scrubbed.

Instead, treat the buckled-lid jars as “failed to seal.” If you have enough such jars from a canning run to justify a reprocessing run, then reprocess the jars within 12 to 24 hours, correcting the mistake you made the first time. Or if you just have one or two jars, refrigerate when the jar has cooled, and use up. (Or if it’s an ingredient item such as meat, veg, etc. you can freeze the contents in another container.)

Is food in jars with buckled lids safe to eat?

If you notice the buckled lid right after processing, and practice safe handling of the food contents afterward (refrigerate, freeze or reprocess  — or just plain eat! — within 12 to 24 hours), then yes the food is perfectly safe.

If, however, you only noticed the buckling when the jar was on the shelf, then you must presume that the food in the jar has gone bad (owing to improper processing methods likely), and dispose of it according to the procedures outlined in the USDA Complete Guide to Canning. See USDA Complete Guide 2015, Section 01, Page 1 – 26: ” Identifying and handling spoiled canned food.”

Buckling when canning with metal cans

Home canning used to also involve actual metal cans! And for some people, it still does!

So it’s important to note that in broader canning terms, buckling also refers to what happens to a metal can during the canning process, whether during home or commercial canning:

This term applies to cans in which one or both ends have been permanently distorted by excess pressure in the can. Slack filling, sealing at too low a temperature, or too sudden of a release of pressure after cooking can all cause buckling.” [11]Cooking and Canning with the All-American Pressure Cooker / Canner 2008. Page 18.

Here, out of historical interest, is what the USDA in 1936 said about cans buckling during processing: