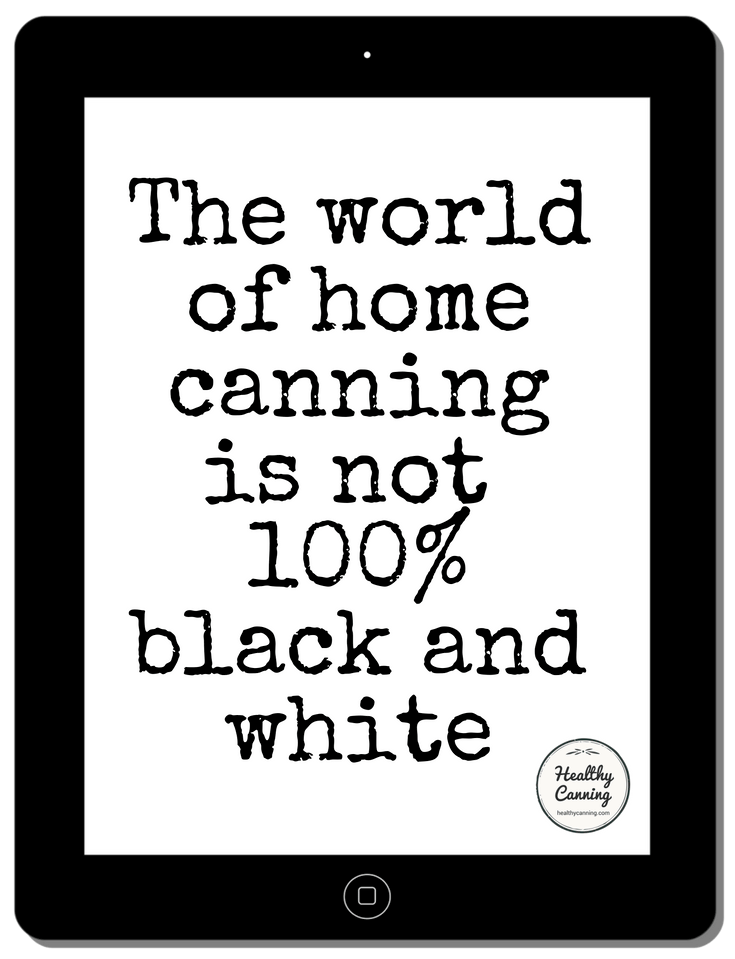 The world of modern home canning is absolutely based on solid recommendations that have been determined by evidence-based, scientific research.

Home canning practices that research in USDA labs has shown is unsafe will be unsafe around the world. That means, it’s also going to be unsafe in France, and Germany, and the UK, as well as in New Zealand and in Australia, however much they huff and puff and go, “oh, those Americans.” Botulism spores, listeria and salmonella do not care about what passport you carry.

That being said, nothing in life ever ends up being 100% black and white 100% of the time, not even science (or, more accurately, our evolving understanding of it.)

This page is a plea against the “hardcore extremists” who plague canning groups.

There are nuances and exceptions to everything in life. Zealous beginners can hate these, because they want to pigeon hole everything into neat, matching, black and white squares, but it isn’t like that.

Besides the 99% “approved” black and white recommendations, there’s also a 1% of “approved” “grey area” items that you can call either choices, or contradictions, or nuances.

Here are some of the nuances / seeming contradictions:

So yes, there are exceptions, and it can actually be useful, if not important, to add the exceptions to your knowledge.

Some of the exceptions — such as saying you can’t use anything but Clearjel, while others say these other brands work just as well — are clearly “political” or “comfort level.” Those two organizations are comfortable naming alternatives because they have tested them in-house and are confident with them; other organizations don’t have that first-hand experience and for their own “political” safety, are going to stick with a recommendation they feel safe with making. There’s no bonus in it for them in sticking their necks out unnecessarily!

Ditto for who will accept whose recipes.

As for other items, such as the contradiction of “follow our horribly imprecise measurements precisely”? Well that’s why all reputable sources factor such huge safety margins into their recipes. They know that when literally millions of people are canning using their recipes, variables are going to enter, whether deliberate or not, and cause a lot of “grey”, however much they would love to keep it “black and white.” That’s why they pad their safety margins so heavily!

The Safe Canning Police believe that the canning world is 110% black and white, with the additional 10% being the weight of the sword of righteousness they carry to bonk the rest of us over the heads with; the Cowboy Canners believe the canning world is 99% grey and 1 % black and white, with the 1% being certain things they think they remember their grandmother doing, which are now therefore sagely advised for the rest of the world as well.

You don’t want to be in either of those camps.

All this being said, there are still a lot of black and white areas in home canning. Don’t can the stuff that is recommended against canning. Don’t try to water bath low-acid food products. Do follow modern tested recipes and recommendations from reputable sources. Don’t try to play silly buggers, or fast and loose with facts that have been established based on evidence-based research. And don’t take this article and try to use it to paint as grey things that absolutely are black and white.

But to be intellectually honest, and to grow in home canning knowledge, you also have to acknowledge that a few “grey” topic areas, such as those listed above, also exist.