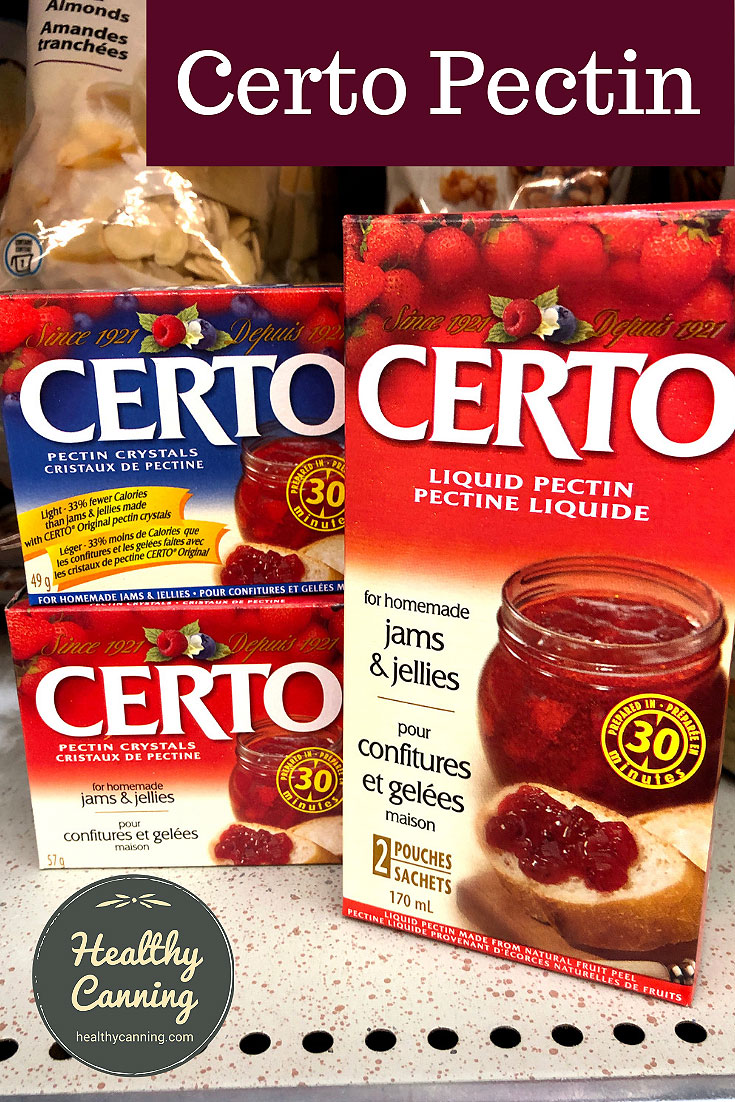 Certo is a brand of pectin sold in the US and Canada, as well as in England. Depending on where you are purchasing, it can be available in liquid form, in powder form, or both. Jelly recipes are often likely to call for the liquid version.

This article begins with a caution about home canning advice from Certo, and then moves on to discuss the products and the history.

On its dedicated Certo web page for Canada, which is often the one that often comes up most prominently in web searches regardless of which country you are in, Certo advises people to sterilize canning jars in an oven, and that home preserves do not need heat processing.

“How do you sterilize the jars? Wash jars and lids in hot soapy water and rinse well. Sterilize jars, lids and rings by placing in a large baking pan and placing in oven at 225ºF for 10 minutes. Keep warm until filling time.
Don’t you need to process/boil the jars in a hot water bath once the jam is finished? By properly pre-sterilizing jars and lids and having everything hot when filling – you don’t need the boiling water bath process.”

The no-processing advice is what home-canning safety experts call “open kettle canning” (aka the “overflow method” in New Zealand and Australia.) And all home-canning safety experts have agreed since the 1980s – that’s as in nearly 4 decades ago — that “open-kettle is held to be inadequate for making a safe product.” [1] Hertzberg, Ruth; Greene, Janet; Vaughan, Beatrice (2010-05-25). Putting Food By: Fifth Edition (p. 44). Penguin Publishing Group. Kindle Edition.

This advice is also contained in the accompanying leaflets that come with the pectin. This dated advice on both sterilizing and processing has been discredited as far back as the 1980s: all jars of preserves do need processing, and both Ball and Bernardin explicitly and repeatedly warn against heating their canning jars in the dry heat of an oven. What’s worse, their “no need to process” advice applies even to their low-sugar product. Any certified person working in the field of home canning today knows that low-sugar jams and jellies need heat processing most of all.

Here is a photo of a jar of raspberry jam made with Certo and following Certo’s advice waving away any need for heat-processing the jars. Notice the mould growing around the top of the jam – and remember that mould actually has tendrils seen and unseen that can go down deep into food. While a handful of moulds can be helpful (think penicillin and blue cheese), tens of thousands more moulds produce toxins that may not do your body any good. 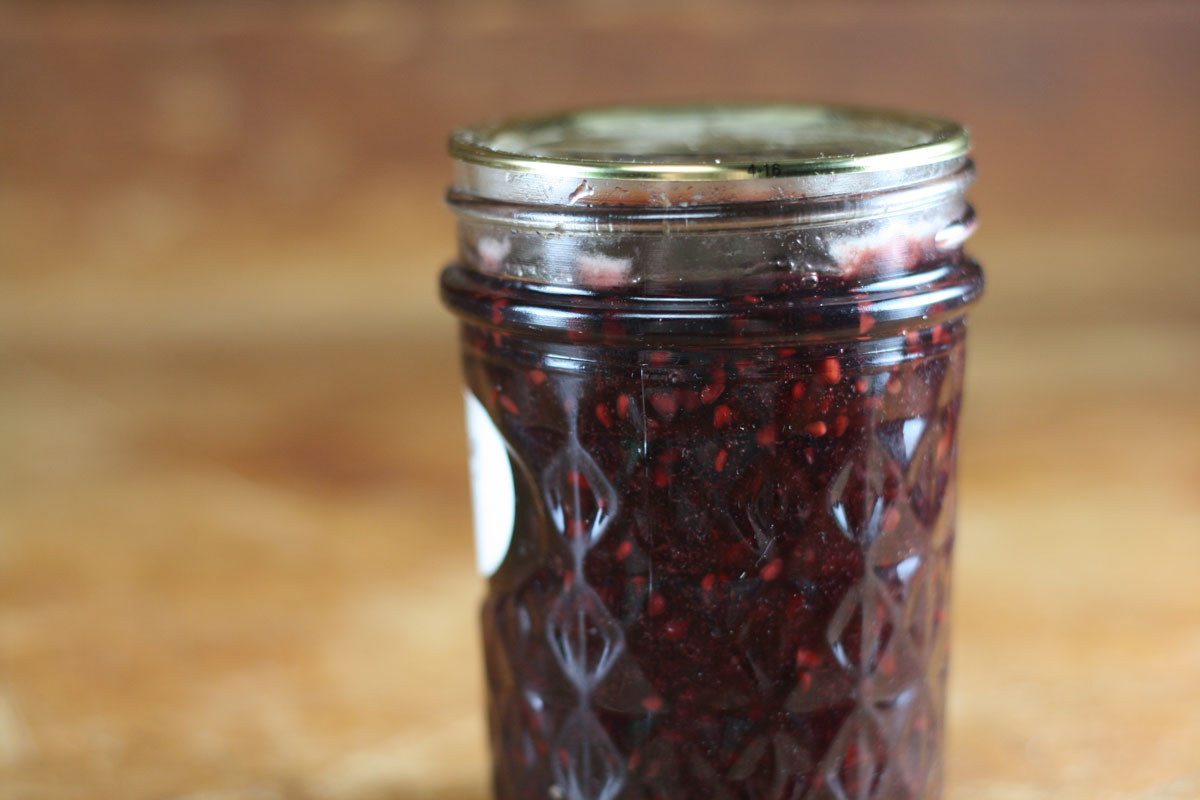 Our feeling therefore is that any home canning advice from Certo should be disregarded. With such basic recommendations so dangerously out of touch with modern food safety recommendations for home canning (and their being concerned instead with your sterilizing the canning ring, which has nothing to do with the price of tea in China), it’s difficult not to wonder what else of their advice or directions is as well. It is probably just easier to buy another pectin, such as that from Ball or Bernardin, which will give out safer advice to consumers.

[There are a small handful of Certo recipes on the US Kraft site. They all appear to call for heat processing of the filled jars. We have no issues with these recipes. The recipes and the recommendations Certo is giving out on its Canadian side need to catch up to the US side.]

Our message to Certo is: Certo, the 1930s called — they want their home canning advice person back.

The North American Certo is owned by Kraft.

In the US, Certo sells pouches of liquid pectin in boxes. There is no dedicated Certo website or web pages, just a few recipes in amongst the general Kraft recipe site. These recipes appear to follow USDA standards and we don’t have any reservations about them. Kraft sells powdered pectin under the names of Sure-Jell and MCP.

In Canada, in addition to the pouches of liquid pectin in boxes, Kraft also sells Certo as a powder, in single-batch boxes. The powdered Certo also comes in a light (low-sugar) version. Kraft has given Certo its own dedicated space on the Kraft Canada site — it is this Certo site which, as of 2019, is still giving out the dangerously dated home-canning advice to both American and Canadian web-searchers alike. 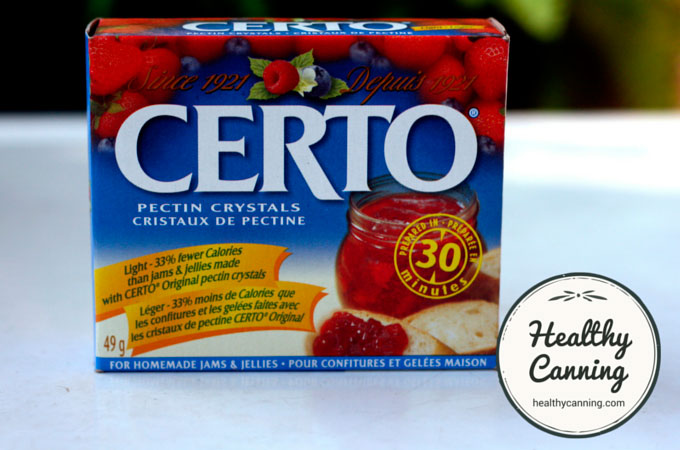 The Canadian Living Test Kitchens say, “Certo Light Fruit Pectin Crystals and Bernardin No-Sugar-Needed Fruit Pectin Crystals can be used interchangeably…” [3] Canadian Living Test Kitchen. The Complete Book of Preserving. Montreal, Canada: Transcontinental Books. 2012. Page 38. This would also mean it could be used interchangeably with Ball no-sugar needed pectin. So, instead of using it in Certo recipes, you can use it in Ball or Bernardin recipes which we know give out safe canning directions.

In the States, for a low-sugar pectin from Kraft, look for their Sure-Jell Light brand (follow link if you want to see a detailed discussion of it.) 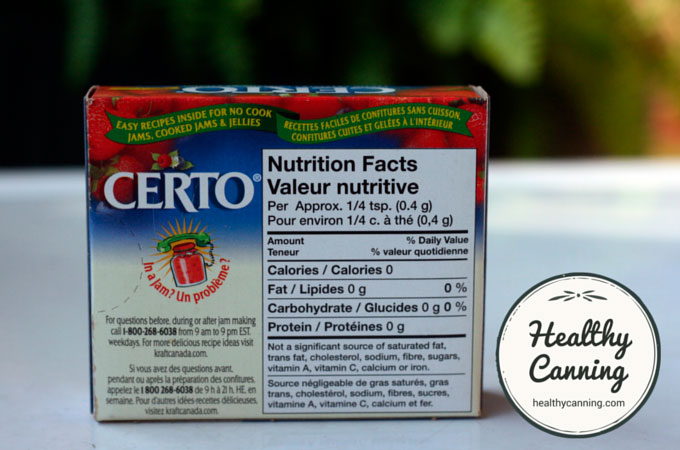 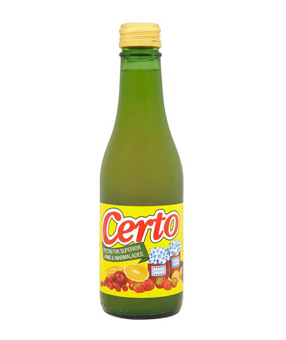 A bottle of Certo as sold in England. From the certo.co.uk site.

The English Certo company has for many decades now been separate from the North American Certo. In England, Certo is only available in liquid form. There is no low- or no-sugar version that we are aware of (as of 2019.)

The English Certo product may by now be slightly differently formulated from the North American Certo, so using their recipes with North American liquid certo may not necessarily work.

In the US, there is no dedicated Certo hotline. According to the University of Nebraska extension, customers should use the general Kraft product helpline at 1-800-431-1001. [4]Albrecht, Julie A. Let’s Preserve: Jams, Jellies and Preserves. EC448. August 2010. Page 2.

We cannot recommend contacting Certo Canada because of the unsafe home canning advice they are promoting, as mentioned above. We’d recommend considering using another pectin instead that gives directions for properly processing jars of home preserves made with it.

Certo was invented in the United States by a Robert Douglas from Scotland. He formed a company to sell it named the Certo Company. The Certo Company was bought by the Postum Corporation in February 1929:

“[Robert Douglas] worked with his father in [his father’s] jam factory, and at the age of 19 invented and patented a thermometer for showing when the jam was ready — this thermometer is still the accepted one for the purpose. He left Scone for the United States when he was about thirty, and immediately began to ascend the ladder of success by leaps and bounds. He perfected a fruit syrup used as a preservative in jams and jellies which was given the name of Douglas Pectin. The invention was a phenomenal success, and a company was launched for its manufacture — the Certo Company. The commodity caught on in the States, a great number of workers were employed, and the shares soared on the New York Market. In 1923 the company was incorporated with Mr Robert Douglas as president, his brother Mr Charles D. Douglas as vice-president, and Mr Earl J. Neville as secretary. It was only in February of this year [Ed: 1929] that the famous Postum Corporation bought up the whole 400,000 shares of the Certo Company, thereby absorbing it. Mr Douglas was a director of the Postum Corporation up until the time of his death… ” [5]Huge Windfall for Scone. Perthshire Advertiser. 3 July 1929. Page 9. Col 1.

Certo was being advertised as early as 1921. Originally, it came only in bottles.  Notice that the name Certo was associated with “Surejell” right from the start. 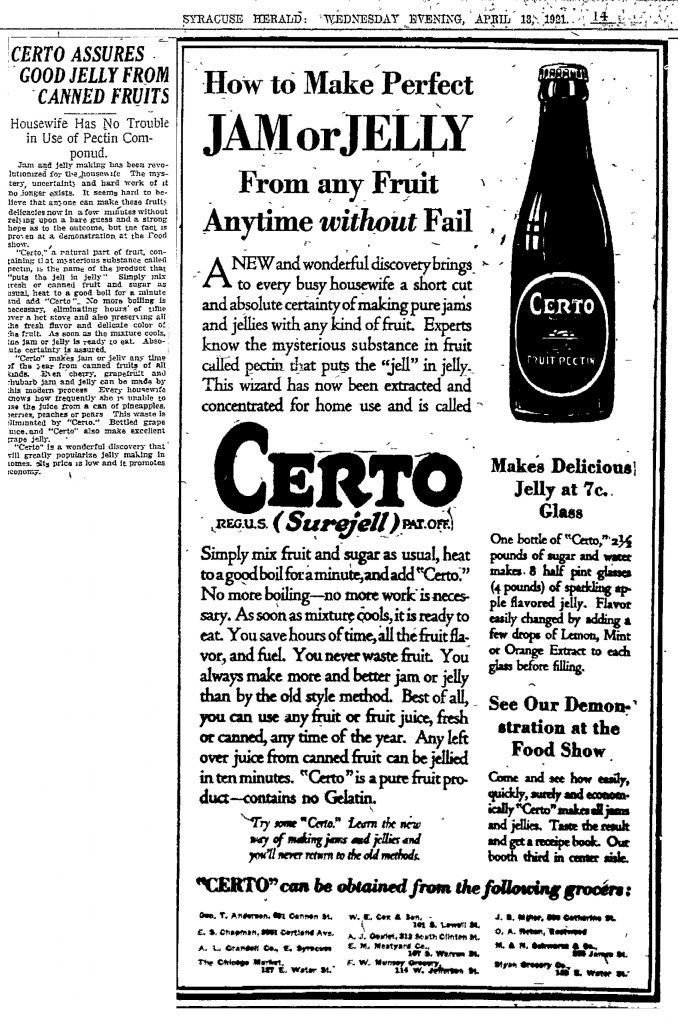 This ad shows the original company name, “Douglas Pectin.” They were in Rochester, New York State. 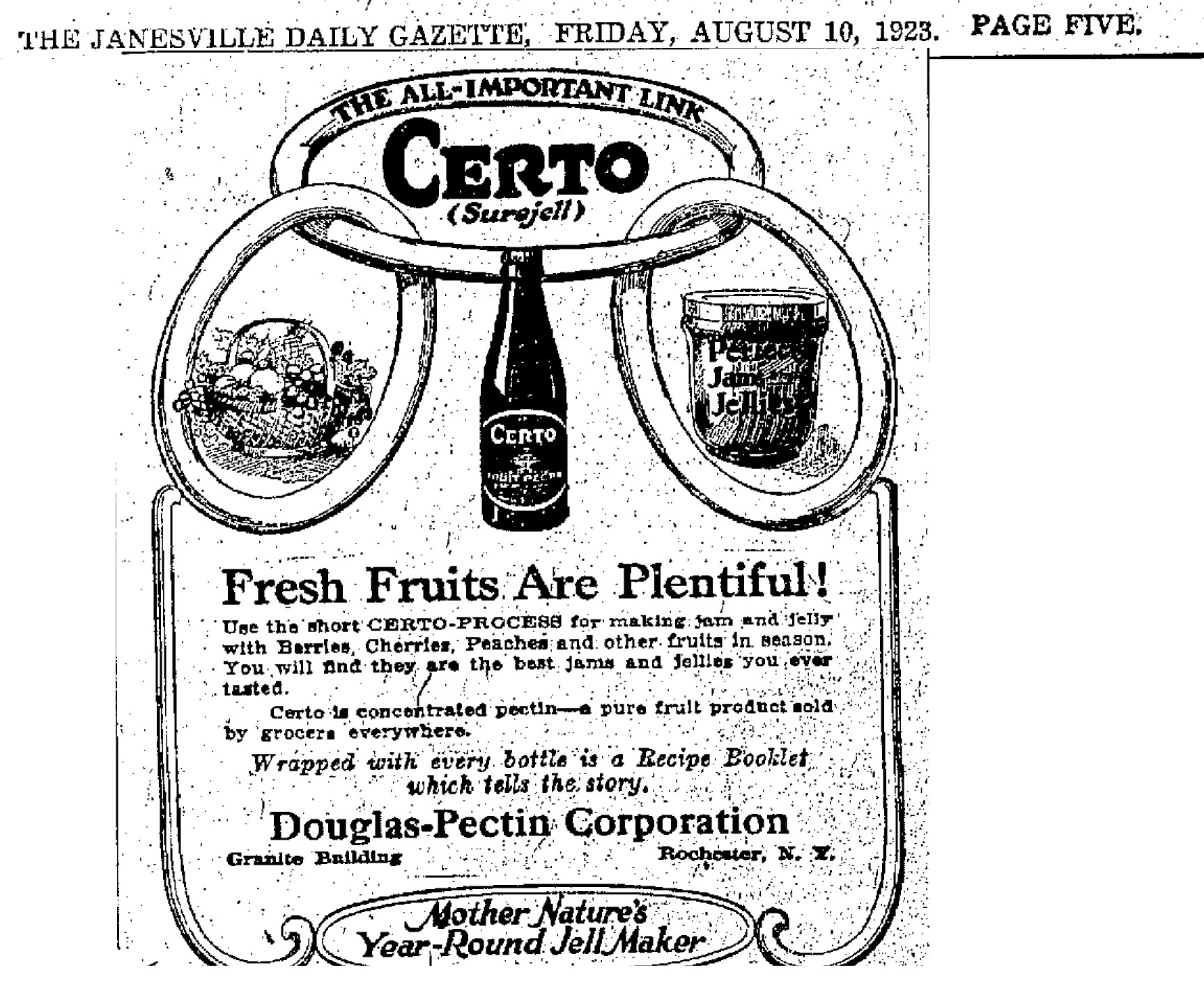 The first United Kingdom advertisement we are aware of is in a Belfast newspaper, 1928. It was on page one, in the newspaper’s masthead. 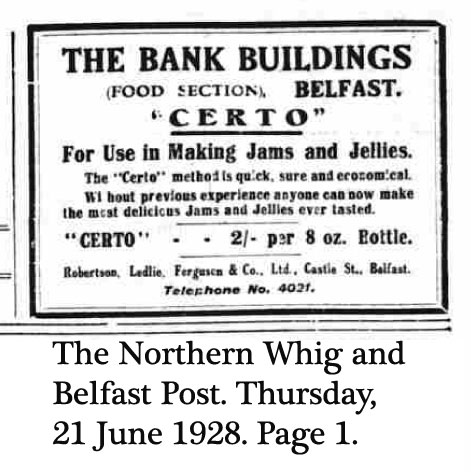 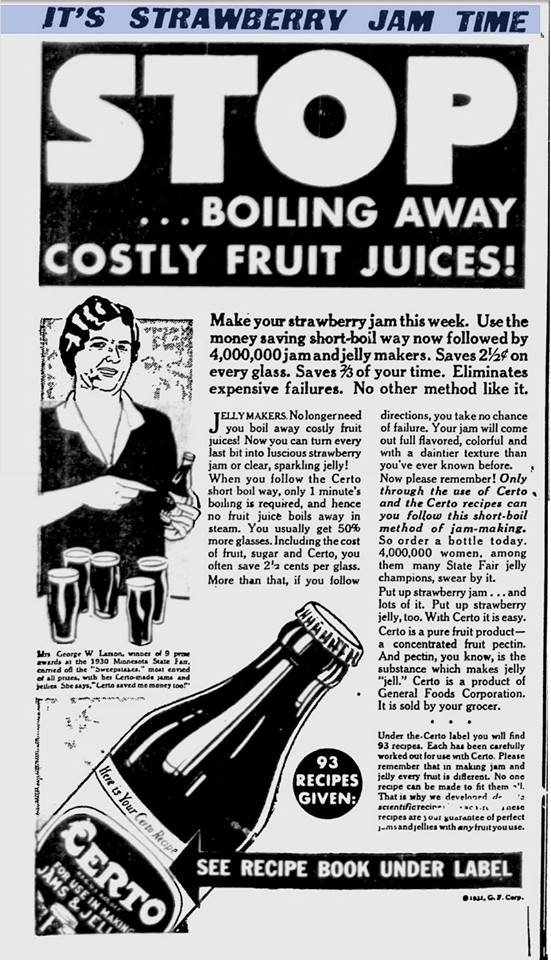 A 1935 ad in Hull, England, includes a sample recipe, and recommends that the finished jam be covered with mineral wax. 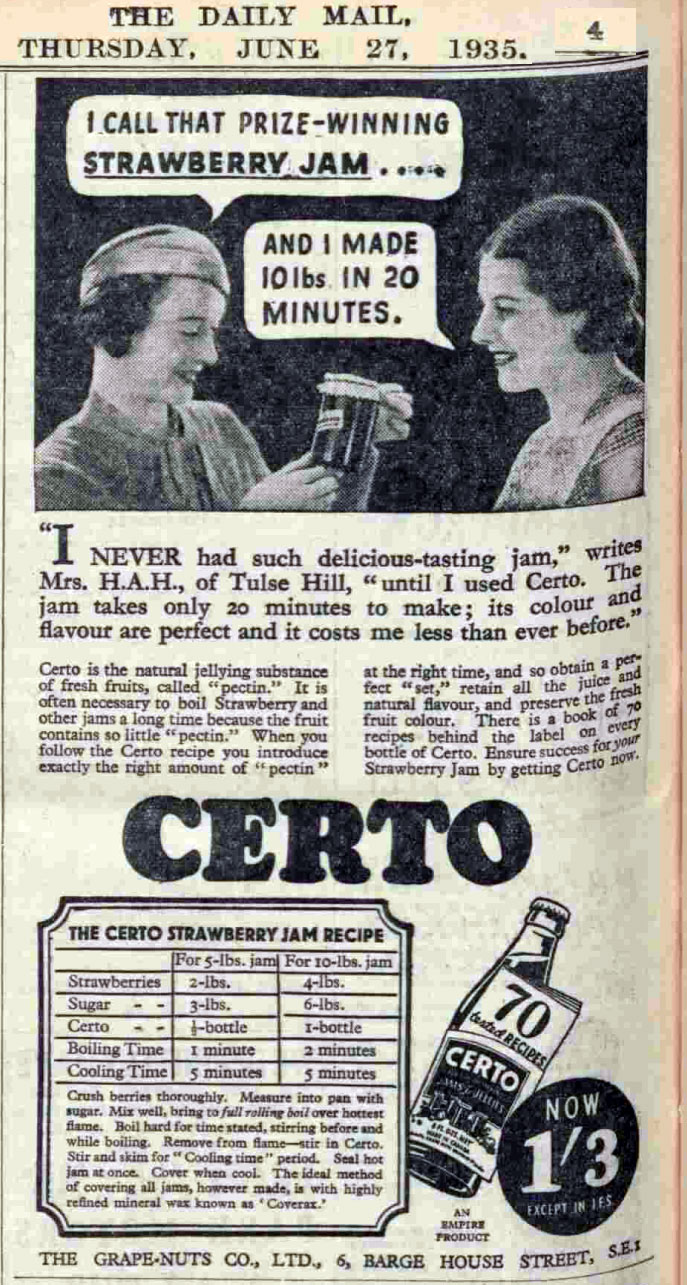 There may have been shortages of Certo in the post-war rationing that continued after the war in the UK, as this shop in Fraserburgh, Aberdeenshire, Scotland advertised that it had managed to obtain a small quantity of it. 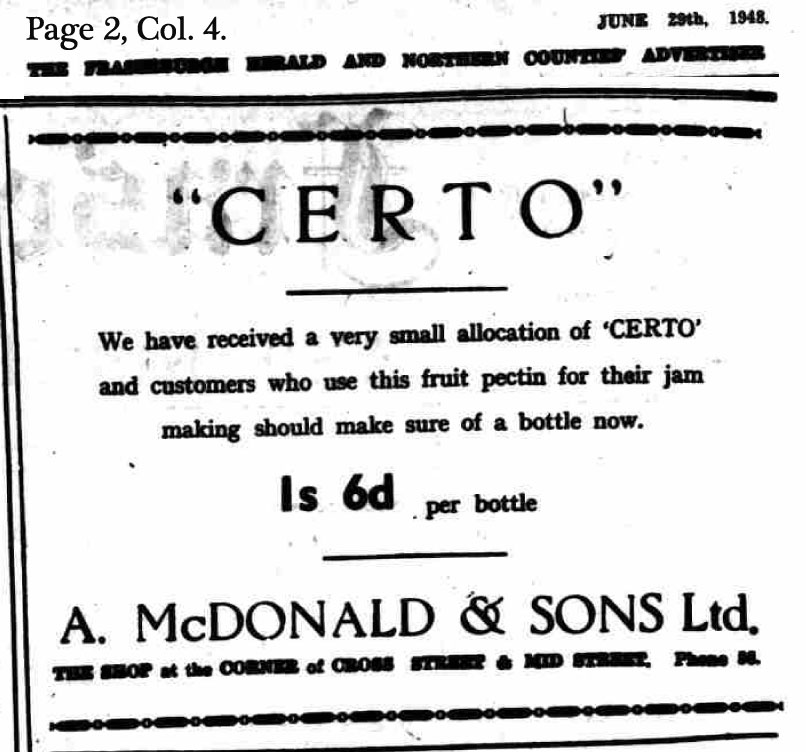