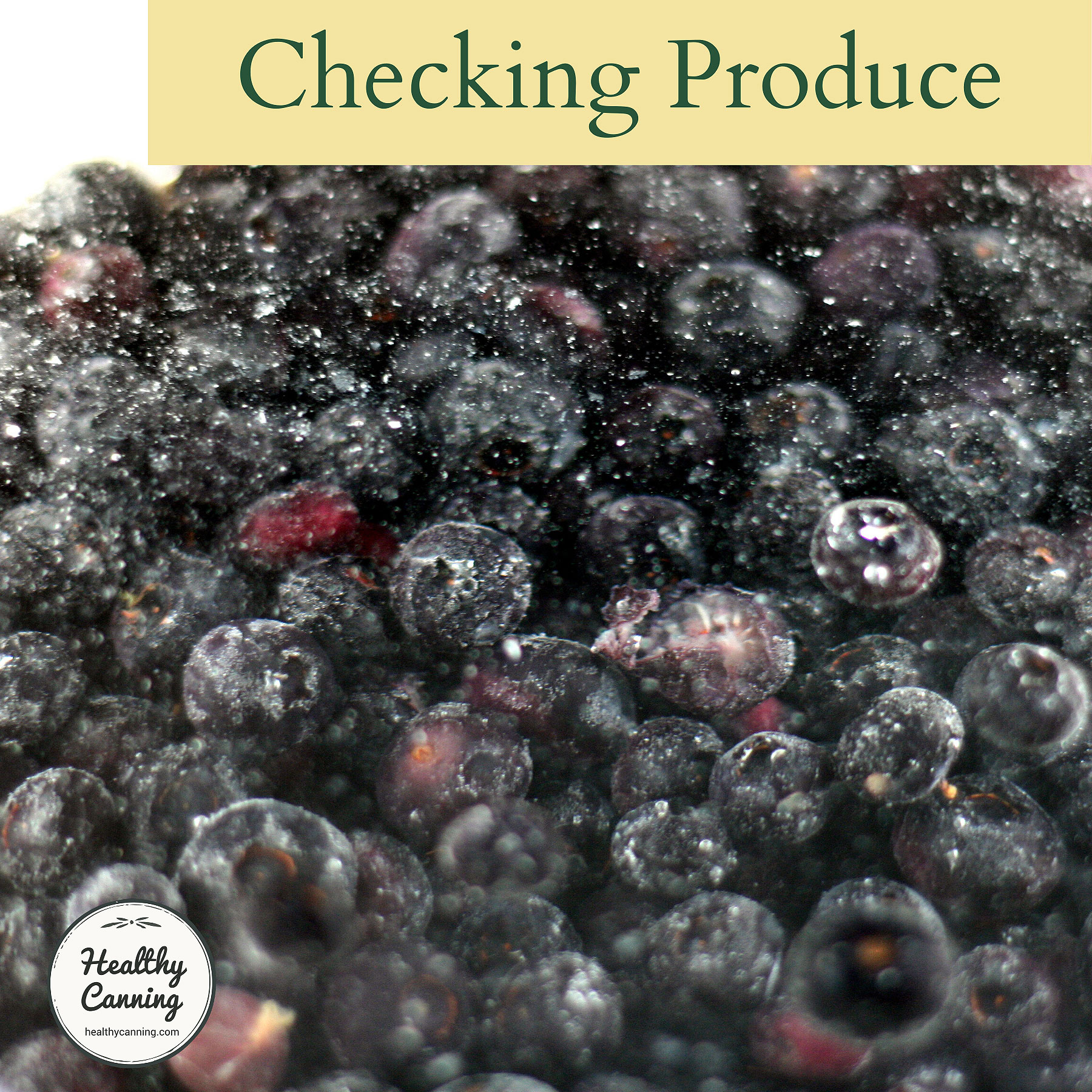 Blueberries plunged in cold water after checking. You can see the loosened wax rising to the surface of the chilling water. © Healthy Canning / 2020

Checking is a technique used to prepare certain produce for dehydration. It makes the process more efficient and improves outcomes.

The process is sometimes also referred to as “cracking skins” or “crazing.”

The purpose of checking in dehydration

The goal of checking is to create cracks in the skin to allow hot air in to allow more even heat penetration. This stops fruit from rupturing, and promotes faster and more even drying, resulting in a better quality product taste-wise and possibly nutrition-wise as well.

The technique is used particularly with produce that has a protective wax coating on its skins: fruits such as blueberries, cherries, currants, cranberries, figs, grapes, huckleberries, plums, prunes, etc.

Checking is typically done by briefly plunging the fruit in boiling water. The resultant cracks create a crazed or “checkered” appearance on the skin, thus the name “checking.” The boiling water plunge also “melts” off the layer of protective wax.

After the heat plunge, immerse the fruit entirely in icy cold water for a few seconds, then drain, and lay out on towelling so more moisture comes off the fruit.

It’s important that the plunge in boiling water be a very brief one, 15-60 seconds plunge, depending on the toughness of the fruit skin (cranberries are at the high end of that time range.) You don’t want the fruit juices to seep out or to cook the fruit into a purée, and at this stage, you don’t want the heat penetrating to the centre of the fruit — this is not blanching.

Not many dehydration guides give an exact time for each type of fruit – just a range. Putting Food By suggests:

Instead of checking a bunch at once in boiling water, you can prick each fruit manually one by one with something like a pin, but this is clearly far more time-consuming. The University of Missouri, as you’ll see in the quote below, also suggest that the microwave could be considered as an alternative. We’ve not seen this alternative suggested elsewhere, and it raises the question as to whether that would be as effective as a boiling water process which also removes the wax at the same time as producing the cracks.

The University of Missouri Extension says:

“Cherries, grapes, and small, dark plums that are dried whole may require a short heat treatment, called checking, to remove a naturally occurring waxy coating and to crack the skins. Checking speeds up drying by allowing interior moisture to evaporate. If checking is not done, there is a greater chance of case hardening, which is the formation of a hard shell on the outside with moisture trapped within the fruit. This may occur more readily when fruit is dried in an oven than a dehydrator. Fruit to be checked should be immersed in briskly boiling water for 30 to 60 seconds, then dunked in cold water and drained on paper towels. Treatment time depends on the thickness of skins. Checking can be done in a microwave oven by heating on high about 20 to 30 seconds, then chilling. Some flavour loss may result from the checking process.” [6]How to Dry Foods at Home. University of Missouri Extension. GH1563. March 2010. Page 1.

“Nature provides a wax-like coating on the skins of cherries, figs, grapes, prunes, small dark plums, and certain firm berries like blueberries and huckleberries; however, they all dry better if this waterproofing substance is removed beforehand. The chances of case hardening and rupturing are also reduced if the relatively tough skins of such fruits and berries are cracked minutely in many places; this is called “checking”, and it allows internal moisture to be drawn through to the surface and to be evaporated, thus reducing the nutritional loss. These check lines are too fine to be visible.

Because the 30 to 60 seconds required for the dewaxing and checking operate is often too short to let live steam be effective for the contents of the blanching basket, the answer is a very quick dip in briskly boiling water, followed by a dunk in very cold water, and thorough draining.

Length of the dip depends on the relative toughness of the fruits’ skins (cranberries are rougher skinned than currants, for instance.) Lay absorbent toweling on the fruit to remove excess moisture from its surface, and continue with the next step in handling the specific fruits.” [7]Excalibur. Preserve it naturally. Sacramento, California. 4th edition, 2012. Page 21.

Putting Food By gives guidance on how to make sure the checking water stays boiling:

“Nature provides a wax-like coating on the skins of cherries, figs, grapes, prunes, and small dark plums, and certain firm berries like blueberries and huckleberries, and they all dry better if this waterproofing substance is removed beforehand. If the skins are cracked minutely (called “checking”), the fruit is unlikely to case-harden. Gather not more than 1 pound of berries loosely in cheesecloth or a wire basket and hold them in 1 gallon of briskly boiling water for 30 seconds; lift out, dunk in plenty of fresh cold water to stop any further cooking action; shake off water, and carry on with the drying. If the amount of food—small in size or cut small—is kept to a maximum of 1 pound [500 g], and the water is at least 1 gallon [4 litres] and boiling its head off, there is virtually no lag between immersing the food and the return to a full rolling boil; so 30 seconds is feasible. At altitudes higher than 3500 ft/305 m, add boiling time to total 30 seconds for each additional 1000 ft/305 m. Some people use food-grade pickling lime—calcium hydroxide—in boiling water to check the skins. Use 1 gallon [4 litres] of water, have only 1 pound [500 g] of food; make up the solution according to the instructions on the package for firming pickles.” [8]Putting Food By: Fifth Edition (p. 376).