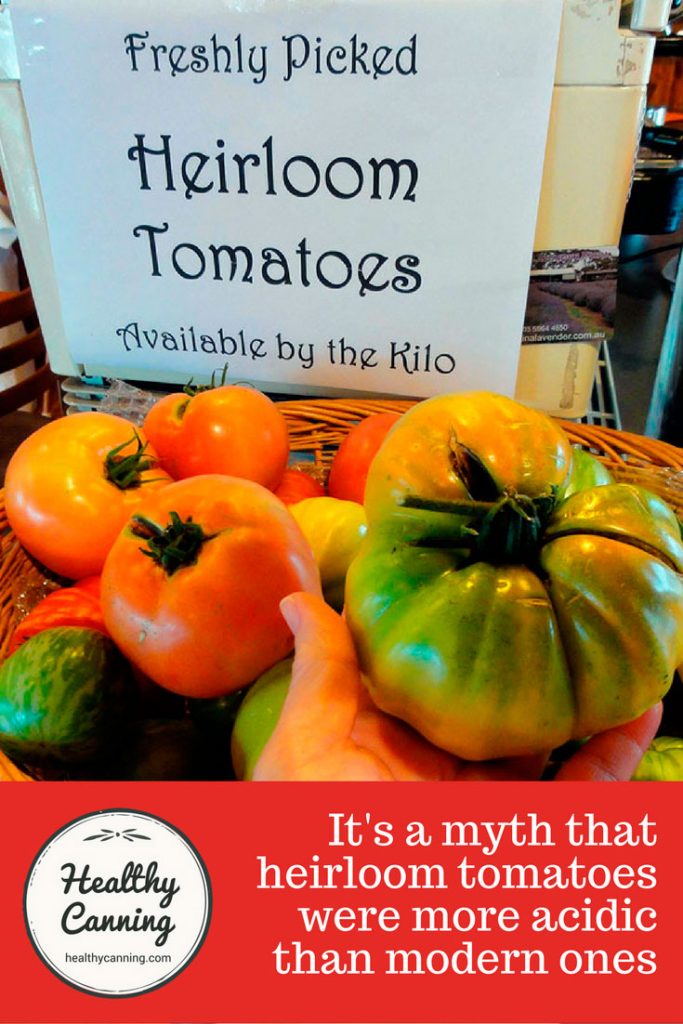 You may see the need for acidification of water-bathed (or steam canned) tomato products being credited to “new varieties” of tomatoes. These new varieties, the explanation continues, don’t have the same acidity level as the old, “heirloom” (aka vintage or heritage) tomatoes of days gone by.

On a good day, today’s dirt even gets blamed as not being as good as yesterday’s dirt:

Back in my grandmother’s and mother’s day, you could can tomatoes without lemon juice because it was acidic enough. Today all the recipes say you’ve got to add lemon juice to be sure it’s acidic enough to be safe. Why? Today’s soils have changed…..” [1] Gibbons, Kathy. Yes, you can! Traverse City, MI: Record-Eagle. 16 November 2015.

This has created some confusion, given that this is being said at a time when “heirloom variety” tomatoes are flooding back on the market. Some people are understandably, though mistakenly, concluding that therefore the older, heirloom varieties must be safe without acidification.

For various reasons, rumors or opinions are spread around as though they are truth, such as the notion that ‘older tomato varieties are more acidic than newer hybrids

Research disproves the myth of older tomatoes being more acidic

For various reasons, rumors or opinions are spread around as though they are truth, such as the notion that ‘older tomato varieties are more acidic than newer hybrids’. In fact, though, it turns out that actual research into the question has shown the opposite: that many heirloom varieties are lower acid than modern ones.

Three separate studies were done, at the University of Wisconsin, at North Dakota State, and at Utah State. [2]University of Minnesota Extension. New and Old Tomatoes Need Acid and Heirloom Tomatoes. In: Home Food Preservation Newsletter, August 2012. Accessed March 2015 at https://www.extension.umn.edu/food/food-safety/home-food-preservation-newsletter/docs/home-preservation-august-2012.pdf. All three universities showed the same results: many heirloom tomatoes were in fact less acidic than modern varieties.

The University of Wisconsin Extension tested the pH of 55 heirloom tomato cultivars. When they grew the plants for testing, the growing season that year was warm early, then cool and wet.

The pH of the mature tomatoes ranged from 4.18-4.92. (Remember, the safe cut-off upper maximum is 4.6. Anything above that is considered low-acid.)

27% of the heirloom tomatoes had a mature pH of 4.6 or higher including Brandywine, Ace, Big Early Hybrid, and Big Girl.

The Extension also reported other factors they found that lowered the acidity:

In addition to the raw tomato fruit, several other factors influence the safety and acidity of canned tomato products:

Small-fruited cultivars and white, yellow and pink tomatoes are in the same acidity range as most standard red tomatoes. The difference in taste of these ‘low acid’ tomatoes is due to higher sugar content which masks acid flavor. Paste tomatoes are, however, consistently LOWER IN ACID (higher in pH) than standard tomatoes. So add acid, regardless of color.” [3] Canning Tomatoes & Tomato Products. Powerpoint Presentation. Lunch & Learn, 23 July 2012. Slide 4 notes. University of Wisconsin Extension. Accessed March 2015.

The variety of tomato you are canning doesn’t matter. Just use the recommended processes; they will give you a safe product regardless of the variety (or the growing conditions that particular season).

Gerald Kuhn, team leader of the first modern USDA Complete Guide, and Elizabeth Andress, head of the National Center for Home Food Preservation, reviewed some of the early findings from the 1970s and 1980s, and looked at how early researchers dealt with the issue of the lower acidity in older tomato varieties:

Ripeness, decay and bruising result in elevated pH values above a safe level, but cultivar alone was found to offer a minimal risk (Sapers et al, 1978). Therefore, home canners were advised not to be too concerned by tomato varieties, but rather to select only top quality tomatoes and to use recommended processes.” [4] Andress, Elizabeth L and Gerald Kuhn. Chapter III, G. Tomatoes. In: Critical Review of Home Preservation Literature and Current Research. Athens, GA: University of Georgia, Cooperative Extension Service. 1998.

Here’s a chart from North Dakota state showing that the pH of mixed modern and heirloom tomatoes is all over the map, and often way above the safety cut-off of 4.6: 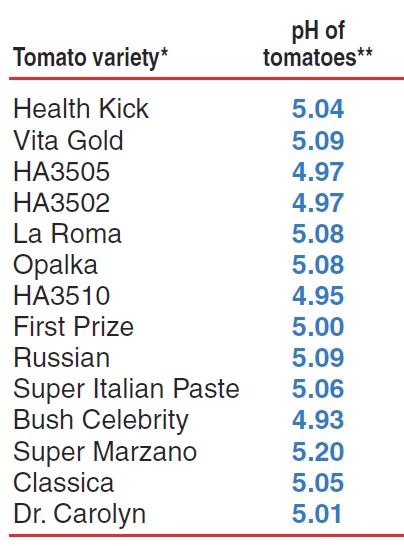 Diane Wright-Hirst from the University of Connecticut writes,

The pH of tomato varieties can range from an acidic low of 3.8 to a much less acidic pH of 4.7. The story goes that as the consumer has demanded a less acidic tomato, hybrids have been developed that taste less acidic—but some argue that this is due to more sugar in the tomato, not less acid. Would that mean that older heirloom varieties are likely to be more acidic? Not necessarily.

A study by Heflebower and Washburn at Utah State in 2010 looked at hybrid varieties, open pollinated and heirloom varieties. The results indicated that the average pH was 3.92 for the hybrids they tested, 4.03 for open pollinated and 4.16 for the heirloom. Of course all of these are below the 4.6 borderline. The authors still recommend the addition of acid to ensure that the final product remains below 4.6.

In a bulletin from the North Dakota Extension Service regarding the use of lemon juice in canned tomatoes and salsa (Garden-Robinson, Houge, & Smith, 2004), the pH of 15 different tomato varieties were tested. The pH readings were taken from the pure tomato pulp prior to canning and again after lemon juice was added and the tomatoes were made into salsa. In this particular study, all of the raw tomatoes tested had a pH from 4.8 to 5.2 prior to canning.

In your home garden, a number of factors can influence the pH of even the more acidic tomatoes: these include soil, vine health, ripeness.”  [5] Wright Hirsch, Diane. Canning Tomatoes: There is a Right Way. University of Connecticut Extension. 1 September 2014. Accessed March 2015.

So, in summary, it was just that the understanding of the science had been wrong: tomatoes, old or new varieties, are just not reliably always on the low side of the 4.6 safety divide.

Utah State conducted a similar study in 2007 and 2008 and also found that many heirloom varieties were likely to be less acidic than modern varieties.

For various reasons, rumors or opinions are spread around as though they are truth, such as the notion that ‘older tomato varieties are more acidic than newer hybrids’ and therefore safe to can without acidifying agents. In our study, the tendency was for the older varieties to be less acidic than the hybrid we compared them to.”   [6] Heflebower, Rick and Carolyn Washburn. The Influence of Different Tomato Varieties on Acidity as It Relates to Home Canning. Utah State University Extension. Volume 48, # 6. December 2010

Consequently, whether jars of tomatoes are being water bathed or pressured canned, whether they are a prized heirloom variety or this year’s latest hybrid, they must have acidity added to them by the person doing the canning. (See here for more information on why some pressure canned tomato products have to be acidified.) 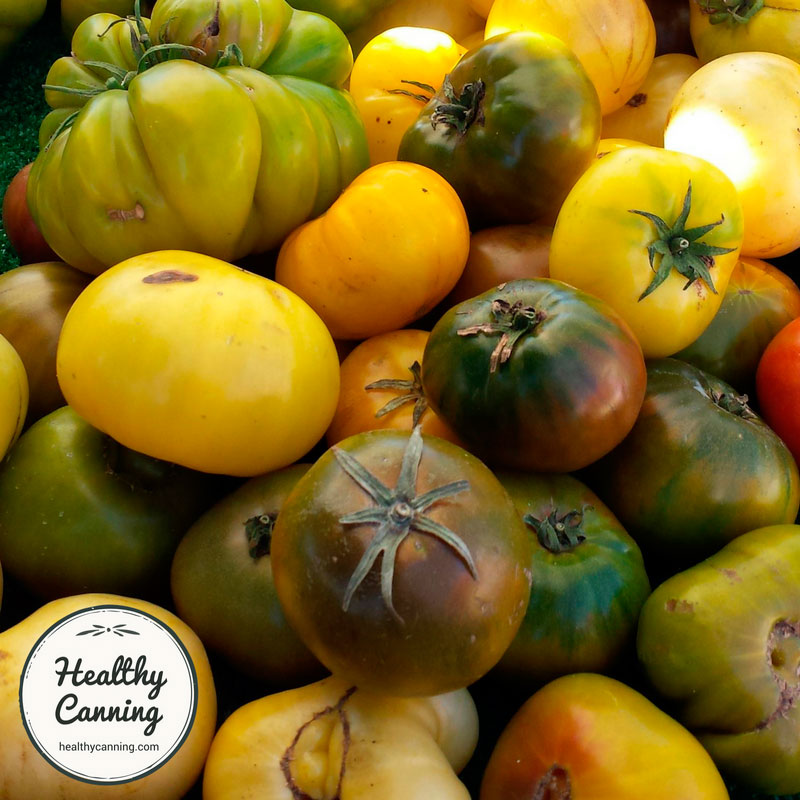 Why does the myth still persist despite all the research?

Why do some home canning teachers still promulgate the myth, then?

Scientists suggest it is because many are educators, not scientists, and they haven’t been made aware yet of current research:

Extension agents are educators by profession. Their mission is to teach “research based” methods to the public. For various reasons, rumors or opinions are spread around as though they are truth, such as the notion that “older tomato varieties are more acidic than newer hybrids” and therefore safe to can without acidifying agents…..

We feel that it is important for Extension agents to promote the current USDA recommendations and to understand them well enough to advise others.” [7]Heflebower, Rick and Carylyn Washburn. The Influence of Different Tomato Varieties on Acidity as It Relates to Home Canning. Journal of Extension. December 2010. Volume 48 Number 6. Article Number 6RIB6 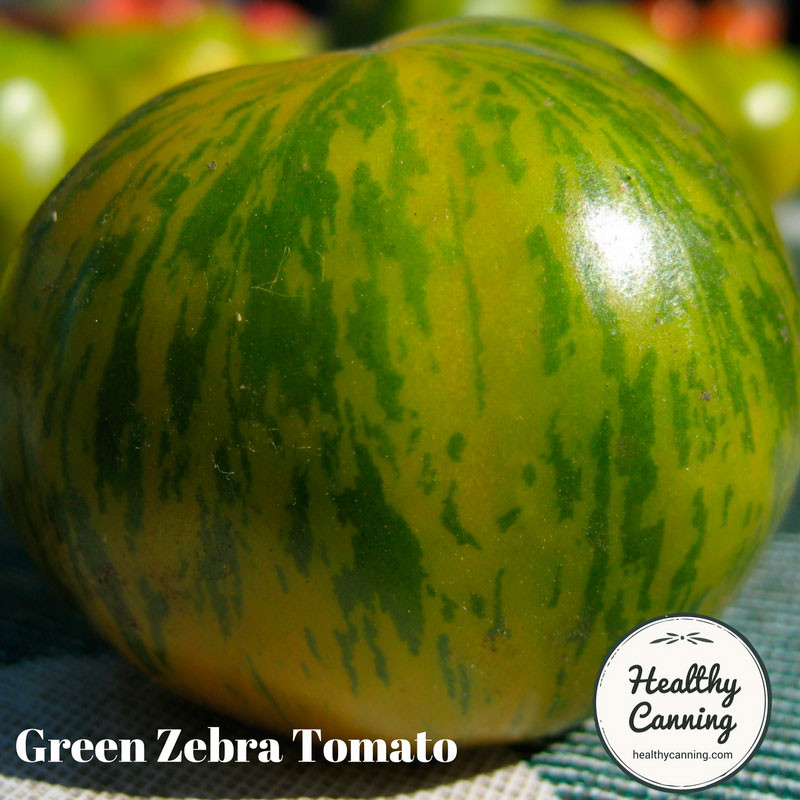 When a home canning recipe calls for green tomatoes, it means unripe tomatoes.

It does not mean a heritage variety of tomato such as German Green or Green Zebra which ripen to green.

The recipe creators are after a tomato that is still green because it is unripe, and thus has a higher acidity range than ripe tomatoes.

A recipe calling for green tomatoes will be looking for that acidity range for safety which a “naturally green when fully ripe” tomato may not have.

(Tomatillos can always be substituted safety-wise for green tomatoes, as they are more acidic even yet, though tomatillos must still be acidified if canned on their own. Whether you would want their extra sour taste in your chow chow is another issue.)

An unsettling conclusion about tomato-canning history

To recap the story so far:

To make it worse, a woefully inadequate recommended processing time of just 10 minutes per quart (see table below) for crushed tomato floated around in old, cherished canning guides until the USDA Complete came out in 1988 and corrected it to the 45 minutes that is is today.

Bureau of Human Nutrition and Home Economics. Home Canning of Fruits and Vegetables – AWI 93. Washington: USDA. May 1944. Page 13. DO NOT USE.

So even if the “heirloom tomatoes” had by chance been acidic enough to start with in the jar, moulds seen and unseen could have survived the short 10 minute processing, causing that acidity to be lowered, and thus allowing any botulism spores present to spring to life, germinate and produce their deadly toxin in doing so.

The chances of illness would have been far higher than today. How many families got “gippy tummies” or worse? The capacity or desire for data collection on population health just wasn’t there in the first half of the 1900s, so incidents weren’t tracked and analysed the way they are now.

Still, in the 1950s, questions about the acidity of tomatoes for home canning were already being raised.

Resources for studies weren’t available until the 1970s, but they confirmed the worries from the 1950s: that many of the tomato varieties were low-acid, and that the acidity of “higher acid” ones could see-saw back and forth across the safe line. (See: Evolution of the understanding of tomatoes as borderline acidic.)

To confirm, the study looked at what we now call “heirloom” tomatoes. Today’s modern tomato varieties were still under development at that time in seed growers’ green houses: they weren’t even released yet.

In saying that in the “old days” people had it easier because of the acidity of heirloom tomatoes is actually masking the horrible truth. They had it harder because the varieties if anything would have often been less acidic, there was no acidification procedure for them to draw on, and, the processing times would have resulted in home canned tomato products that were woefully underprocessed.

To be clear, this is not to say the opposite — that because many of today’s varieties are more acidic you don’t have to acidify.

The takeaway instead is: the acidity of tomatoes will always be all over the map, even with the same variety, just based on growing conditions and year alone. Heirloom varieties were and are no magic bullet, nor are modern for that matter. A tart or sweet taste is no indication of the right or wrong pH.

You want a pH of 4.6 or less in that jar. The only way to ensure that kind of safe product for your friends and family is to properly acidify that jar of tomatoes.

Tagged With: Tomatoes
If you need FAST or relatively immediate canning help or answers, please try one of these Master Food Preserver groups; they are more qualified than we are and have many hands to help you. Many of them even operate telephone hotlines in season.