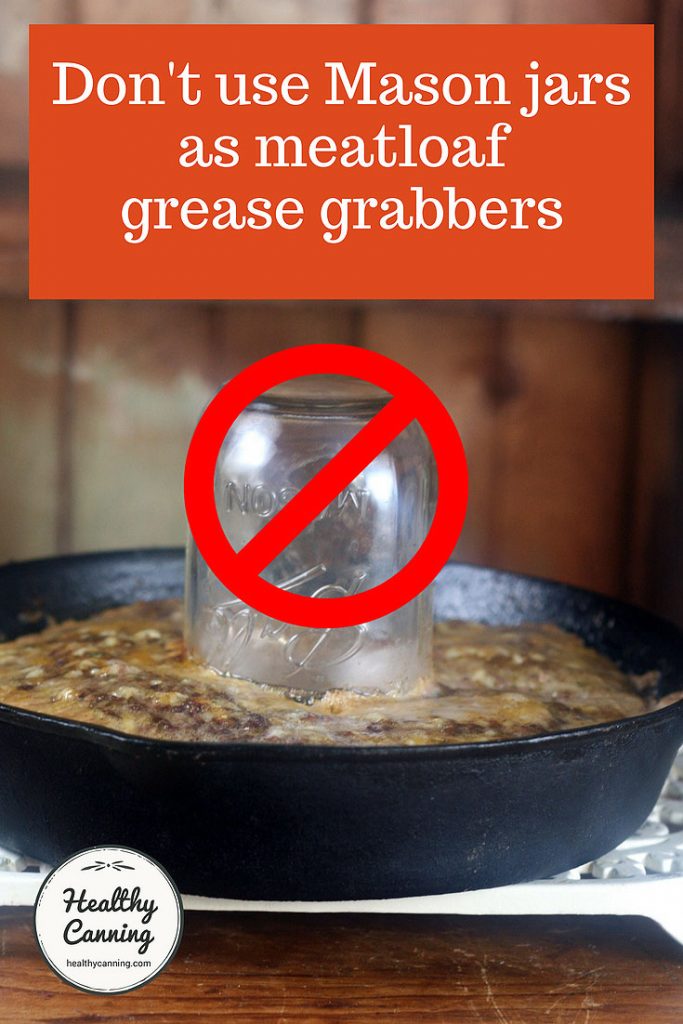 A “tip” has emerged in some groups on Facebook to use a Mason jar as a “grease grabber” to suck up grease out of meatloaves.

The “tip” goes like this. Take a cast iron skillet, or other round oven-safe vessel, and in the centre put an empty, upside-down Mason jar with no lid. Pack your meatloaf in around that jar. Bake the meatloaf uncovered till done. Remove meatloaf from oven, let cool a bit, serve. Take all meat loaf out of the pan before removing the jar, which will have sucked up all the grease into it. (Only touch the jar with an oven mitt after baking.)

Some people say that the “juice” inside the jar can then be used as “gravy” to pour on your potatoes, but given that that “juice” is actually pure grease, it may not be the healthiest option.

This is not a canning question, clearly, but we’ll cover it as it involves canning jars.

How does this work 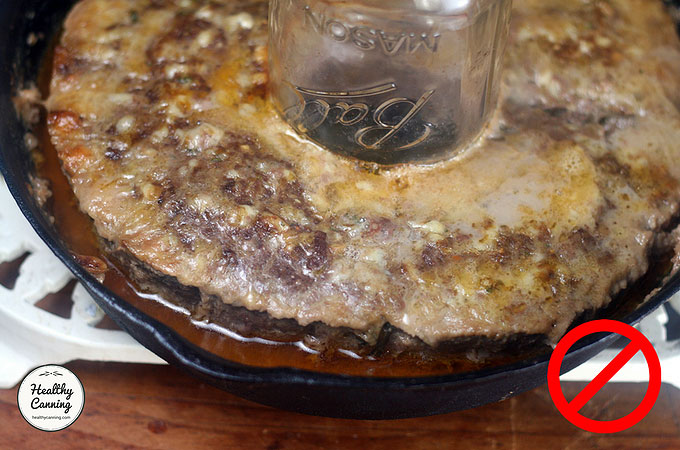 Straight out of the oven. All the grease pooled on the sides, from where we would normally just have siphoned it out with a turkey baster, but we needed to see if the jar would do its stuff and suck up the grease.

First, to be clear, this is absolutely not a safe practice owing to the risk of the glass breaking from the form of heat the glass is receiving. Glass is tempered in different ways for very different uses.

Canning jars are not tempered for use in hot, dry air; rather, their glass is tempered to withstand heat in moist environments (namely, the water inside canners, and no that does not include “moist grease.”)

The risk is that the glass jar could crack or worse, shatter. If it does, it could explode inside the oven or as you remove it from the oven exposing it to a sudden air temperature change, exploding hot grease all over you.

If the jar even cracks, the meatloaf should still be garbaged (and not given to animals), as it could contain minute glass shards.

Several people have already reported the jars cracking on them while attempting this.

What do Mason jar makers Ball and Bernardin say

Both Ball and Bernardin recommend against doing this with Mason jars.

Our jars are not meant for the oven so any heat of that type could potentially cause harm. We would not encourage anybody to do this.” [2]Emerie Brine to Randal Oulton. Email on file. 18 January 2018.

What this boils down to is that should anything happen while you are using one of their jars in this way, you are on your own; you can’t come to them for replacement of the jar, or worse, any medical expenses. 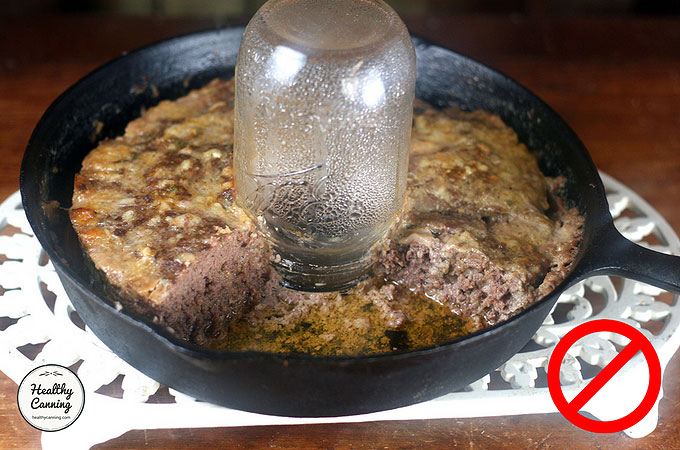 There are other issues from a culinary perspective.

This really only starts to work if you let the meatloaf cool enough for the vacuum to do its job. But, that means you have to wait around, instead of just serving up, and, not everyone is going to thank you for cold meatloaf for their dinner.

This really only works with roundish pans, and not so well with loaf pans (as many people use for meatloaf) because apparently, it can’t reach the grease at the far ends of a long loaf pan.

The dramatic amounts of grease you see being sucked up into the jars in Pinterest images are only true if you have used the world’s fattiest ground meat to start with, giving it that much grease to be sucked up.

This really doesn’t work well with lean or extra-lean ground meat, as there won’t be enough grease to be sucked up.

We had to try this in order to get the photos, of course. Thankfully the jar did not break. But, it really didn’t go a great job, either. The meatloaf was far greasier than it would have been had we dealt with the grease in a normal, traditional way, such as one of the ways below. 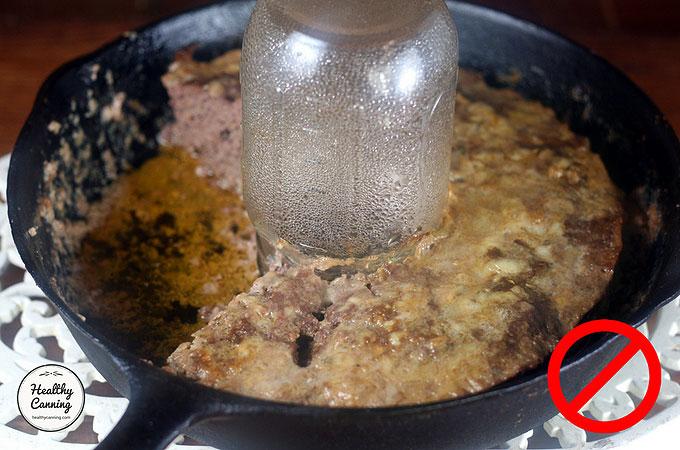 The jar is cooling, as evidenced by the condensation inside, but it really isn’t drawing up much of the grease visible in the pan.

The Mason jar “grease grabber” method is actually less effective than other tried and true ways such as baking the loaf in a special meatloaf pan with a draining tray at the bottom, or baking it as a “mound” with the sides free for the grease to run off into and periodically sucking the grease out with a turkey baster.

You can also make an improvised meatloaf rack. Spray a metal cooling rack with cooking spray, cover it with tin foil, spray that with cooking spray as well, and poke holes in it every ½ inch (2 cm) with a skewer. Place on a rimmed baking sheet and place your moulded meatloaf on top to bake. (The downside to this is that the rack can be a chore to clean afterward even after spraying it first.)

If you really want to try this

If you really want to try this, for kitchen safety, we’d recommend instead just using a tin can that you’ve removed the top of and washed and removed the label. (Only touch with an oven mitt after baking.)

To be clear, we did this only because photos were needed to illustrate the article. A heavy duty kitchen apron and mitts were worn, as well as workshop goggles, when handling the heated pan and jar in case the jar shattered spraying hot grease around. 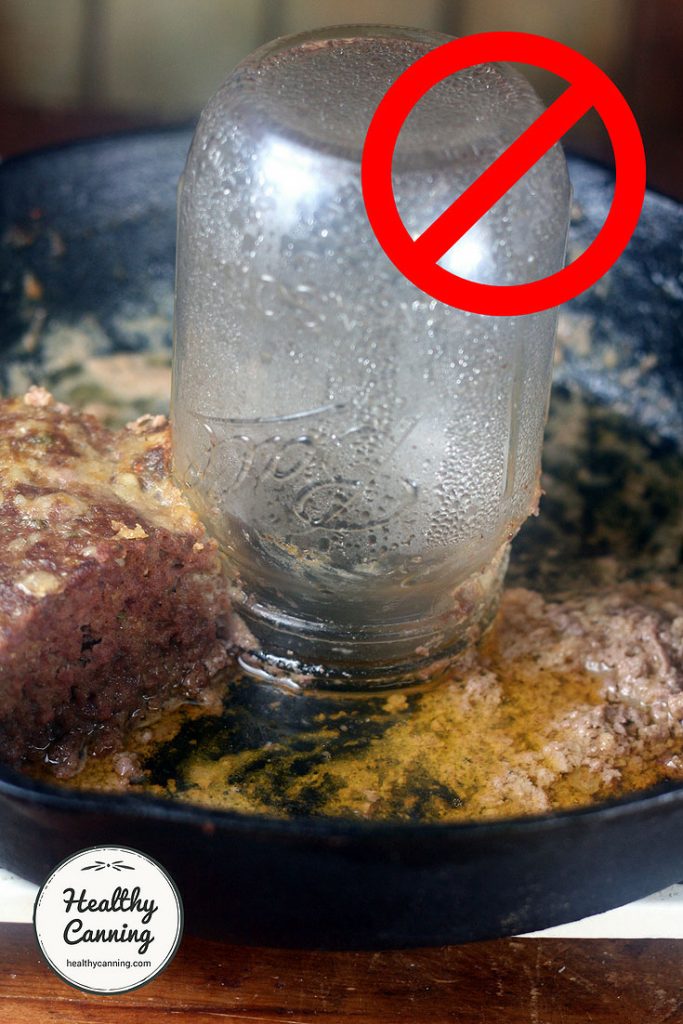 This method produced a far greasier meatloaf than we are used to.