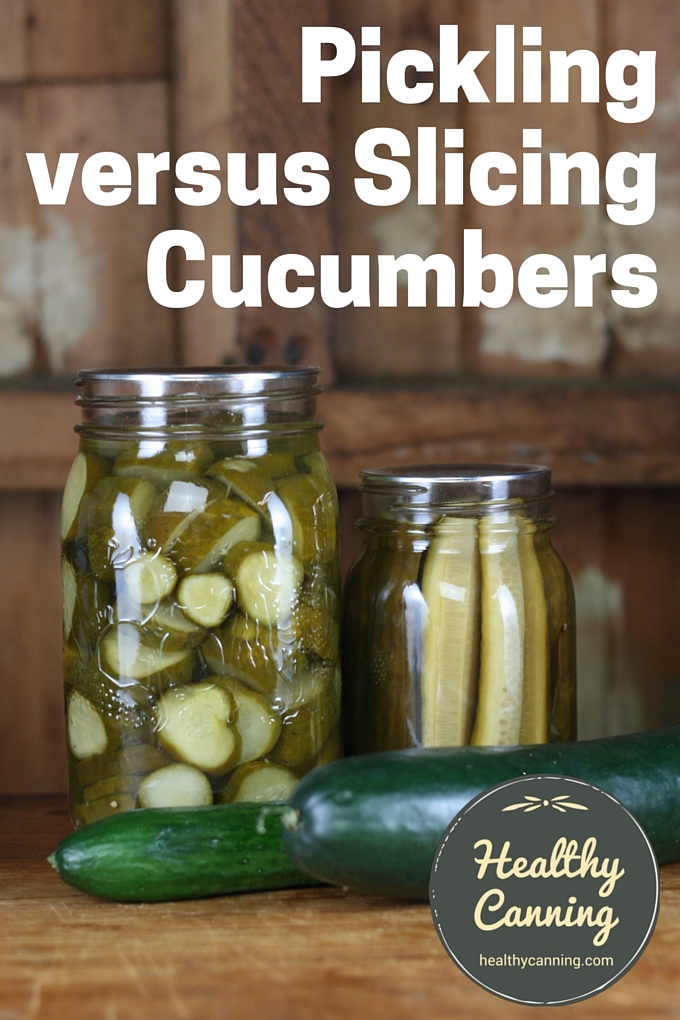 “Pickling” refers to cucumbers that are primarily used for processing or pickling. Pickling cucumbers have thin skins, are short and blocky, and usually have a color gradient from dark green at the stem end to light green at the blossom end.

To help, you can make sure to chill cucumbers well before starting.

For gherkins, look for pickling cukes about 4 cm (1 ½ inches) long.

Larger or older pickling cukes are ideal for sliced pickle products such as bread and butter, dill pickle slices, and relishes. 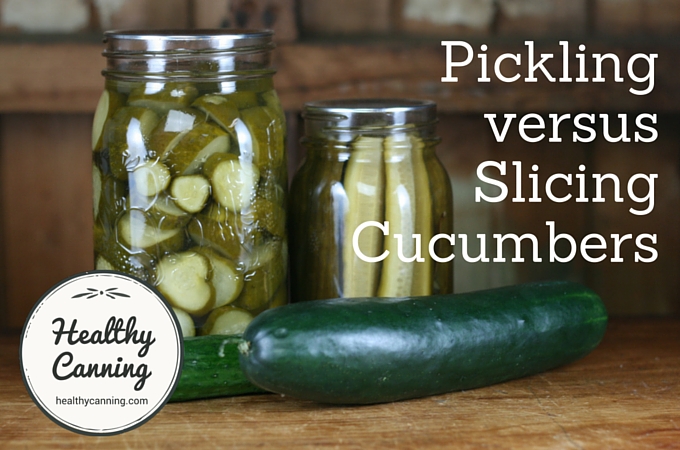 Trim the ends off cucumbers

Leaving the blossom end on your cucumbers can give you undesirably soft pickles.

Enzymes that can cause spoilage are particularly tough to control in cucumbers: “… the natural enzymes in some foods, notably cucumbers, are especially tough. Thus, in making pickles, the heat resistance of enzymes is as much of a concern as the heat resistance of bacteria, molds, and yeasts, all of which are controlled not only by the heat of the processing bath but also by the acid of the vinegar-loaded pickling solution.” [3] Hertzberg, Ruth; Greene, Janet; Vaughan, Beatrice (2010-05-25). Putting Food By: Fifth Edition (p. 4). Penguin Publishing Group. Kindle Edition.

The blossom end is easy to tell if the cucumbers you have using still have a bit of stem on them: it’s the opposite end from that! However, because otherwise it might be confusing to try to distinguish, many canning recipes just say trim a bit off each end of the cucumber.

If you do trim the end off, the experts at the USDA and its university extensions say that you really shouldn’t need any of the old tricks such as adding a grape leaf, etc., beyond chilling the cucumbers first.  Some though suggest you might also want to considering adding Pickle Crisp®  (aka Calcium Chloride) to the jars.

Generally, it is advised to avoid cucumbers with waxed skin when doing pickles  — the wax on the skin can interfere with the brine penetrating your cucumber to make it safe.

They are fine to use, though, in recipes that are calling for the cucumbers to be peeled anyway: then, it doesn’t matter what’s on or not on the skin:

Large field cucumbers (as opposed to small, pickling cucumbers) often are sold with wax on the skin to extend their shelf life, whereas the long cucumbers called “English” are sold shrink-wrapped in plastic. For this reason, sometimes more conservative recipe writers will specify English cucumbers. “We don’t peel the cucumber for use in this recipe because the skin brightens up the colour of the relish, making it more visually appealing. Since the peel is left on, we specify the use of English cucumbers. Field cucumbers are often sold waxed to extend shelf life, and the pickling liquid cannot penetrate the wax.” [4] Kingry, Judi and Lauren Devine. Side note to Chow-Chow Relish Recipe. In: Bernardin Complete Book of Home Preserving. Toronto, Canada: Robert Rose Inc. 2015. Page 221.

Tagged With: Pickles
If you need FAST or relatively immediate canning help or answers, please try one of these Master Food Preserver groups; they are more qualified than we are and have many hands to help you. Many of them even operate telephone hotlines in season.