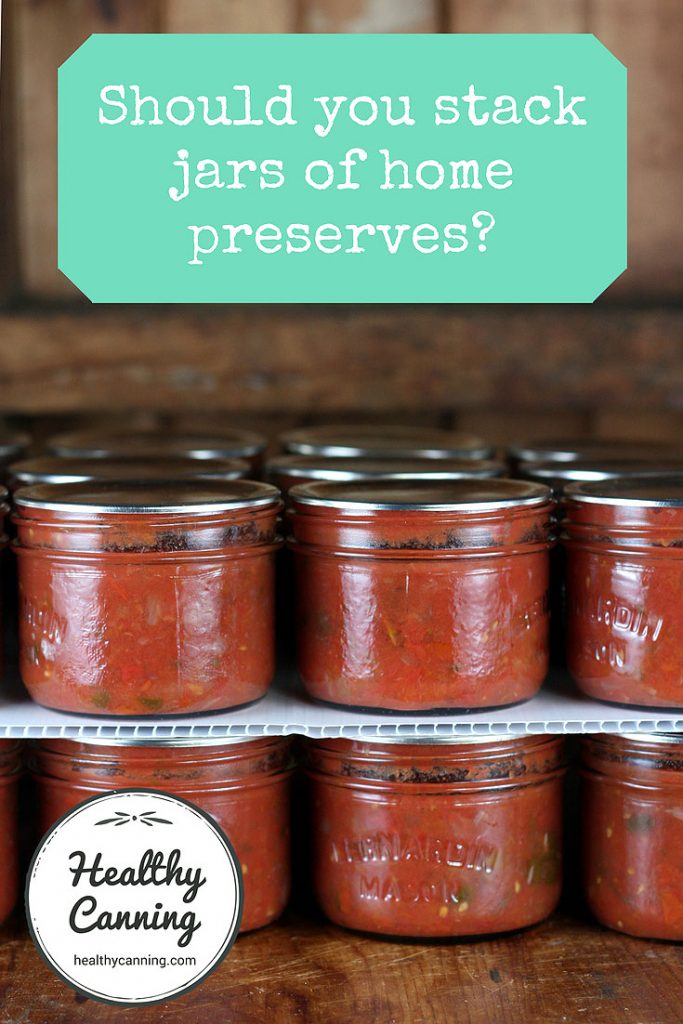 It’s a much-quoted truism in canning groups that you shouldn’t stack your filled jars of home-canned goods when storing them on the shelves.

We haven’t managed to track down where this idea comes from, but in fact the experts say otherwise.

There is a difference in opinion, however, as to the fine points in how to stack.

It would be a good idea to not stack jars too high directly on top of each other; one manufacturer recommends no more than two layers high. It would be best to provide support between the layers as a preventive measure against disturbing the seals on the lower jars. Jars could be placed in boxes to be stacked, or use some type of a firm solid material across the jars as a supportive layer in between them.” [1]National Center for Home Food Preservation. Storing Home Canned Foods. Accessed Jan. 2018 at https://nchfp.uga.edu/how/store/store_home_canned.html

The idea with the cardboard, some say, is that it distributes weight, and, helps prevent an avalanche of jars from happening.

Some people say they just simply put the filled, sealed jars back in the boxes that the jars came in from the store, and stack those boxes, and the boxes cardboard bottoms provide the layer.

We’re not sure which manufacturer they are referring to.

In December 2017, a Ball customer service rep on Facebook said,

We followed up with Ball and asked them if they recommended a layer limit. This was their reply, via Facebook:

Nevertheless, many people continue to choose not to stack jars.

Some feel that the weight will weaken the seal. Others make the counterpoint that with atmospheric pressure at sea level being 14.7 lbs, worrying about the 1 lb weight of a pint jar on a seal doesn’t make sense.

Others feel that the weight of an upper jar could hold in place the lid on a jar whose seal has failed, and after some chemical reaction inside the jar with the failed seal has taken place, that the lid, already being kept in place by an upper jar, could reseal itself. They point out that with the current standard advice trending to be removing canning rings on the shelf for just that reason, the stacking advice doesn’t make much sense.

For the record, the Weck company says that stacking Weck jars filled and sealed with home preserves is not an issue with Weck jars; that you can go ahead and stack them with confidence on your pantry shelves, because the rubber tab will be your safety indicator.

In the seal on the WECK jars, the pull tab of the rubber ring on the sealed jars quite clearly faces downwards. If you arrange the jars correctly on your shelves, you can simply check them by visual inspection to ensure that they still face down. This facet of the seals will prove the stackability of the WECK jars and arrange them on top of each other.” [4]The Key to Success. Weck International Online.

(To be clear, Weck jars as of winter 2017/18 do not have a “use” recommendation, though a usage study on Weck jars and their seals is underway: we mention the Weck stacking question in the interest of thoroughness for those in other parts of the world who might be using Weck jars.) 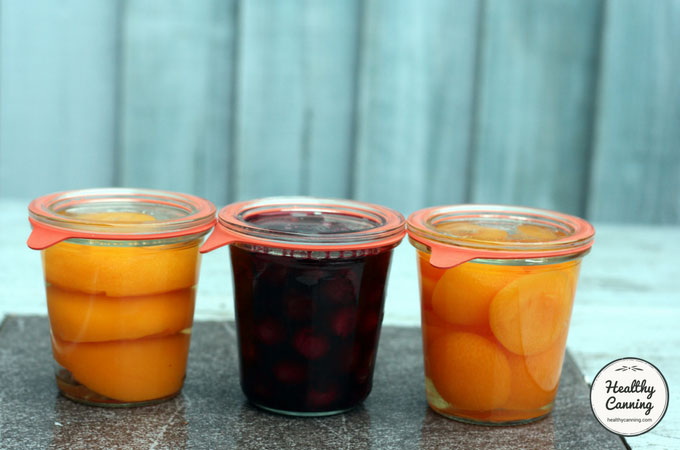 A Weck jar tab points down indicating a hermetic seal. The strength of vacuum required to achieve a strong enough seal to get the tab to point down can only be achieved through the heat of processing.

The Ball Blue Book, the Ball / Bernardin Complete, the Ball All New, and So Easy to Preserve are silent on the topic of stacking jars.