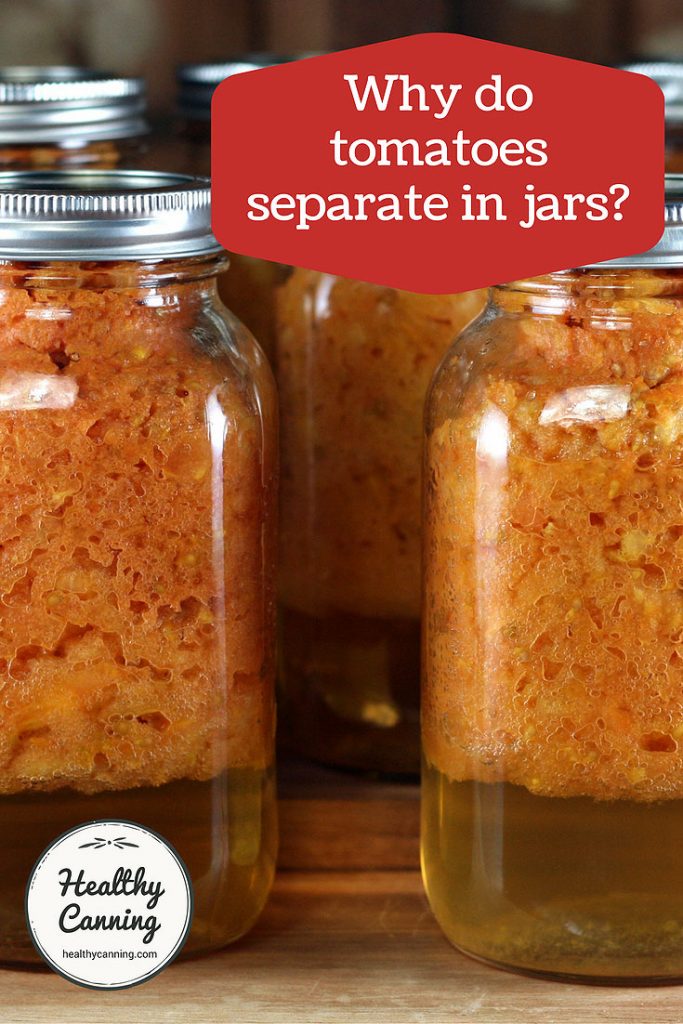 Occasionally, some people may can a batch of tomatoes — either as crushed or juice — that separate in the jar into tomato solids and liquid, as in the photo above.

It’s not overly-photogenic and looks like a canning fail. And you certainly won’t win any county fair ribbons.

Still, nobody wants it to happen, and nobody’s going to proudly display those jars at the front of the shelf.

Many people, thinking from a cook’s background, think it’s to do with the variety of tomato — that a slicing tomato was used instead of a paste-type (such as Roma) tomato.

Actually, however, it’s far more to do with technique.

Here’s what we are told to do by the USDA Complete Guide (as well as other authoritative sources such as Ball, Bernardin and So Easy to Preserve.)

Heat one-sixth of the quarters quickly in a large pot, crushing them with a wooden mallet or spoon as they are added to the pot. This will exude juice. Continue heating the tomatoes, stirring to prevent burning. Once the tomatoes are boiling, gradually add remaining quartered tomatoes, stirring constantly. These remaining tomatoes do not need to be crushed. They will soften with heating and stirring. ” [1]United States Department of Agriculture (USDA). Complete guide to home canning. Agriculture information bulletin No. 539. 2015. Page 307.

They don’t say why though. That’s one of the complaints about many canning directions — that they leave off the “why.” So, to a modern eye, the directions can look futsy and outdated. Many modern cooks will go, oh, well those directions were written pre-food processor. So I’ll just be clever and whiz them all in a food processor instead.

But you really, really don’t want to do that. Here’s why.

Bernardin explains why separation can happen and how to reduce the chance of its occurring:

During storage, pulp and juice in home canned tomatoes may separate, especially in sauce or juice made with crushed or puréed tomatoes. Separation is caused by an enzyme, Pectose (Pectinesterarse), found in high concentrations in tomatoes. The enzyme is activated when tomatoes are cut. To reduce separation, heat tomatoes quickly over high heat to 82 C (180 F) to destroy the enzyme.” [2] Bernardin Guide to Home Preserving. Toronto, Canada: Bernardin Ltd. 2013. Page 48.

That enzyme is the reason behind the otherwise-mysterious way of doing crushed tomatoes (not actually crushing them but rather heating tomato quarters a bit at a time.) The gradual preparation method allows heating to occur relatively rapidly to kill the enzyme off before it gets a chance to act.

It really does come down to the principle of not giving that enzyme time to do its dirty work.

Think of sliced tomatoes on a plate, ready to serve. The plate will be bone dry when you first put the tomato slices on it. Five minutes later when you pick the plate up to put it on the table, there is often a small pool of water forming on the plate. That’s the enzyme, starting to work already.  Along that line of thought, the worst you could do would be to crush all your tomatoes in the food processor, then put that in tubs in the fridge to sit over night, and then proceed to cook and can them. You would get massive liquid and solids separation in the jars because you’ve freed up tons of the enzyme and given it loads of time to work.

When it does happen, you could maybe turn it into an advantage. If you are going to be using the crushed tomato in a recipe that would have you boil it down, if you are careful when you go to remove the tomato from the jar, you can leave that water behind and save yourself a lot of boiling-down time. (If it’s a recipe that might be counting on that added liquid, such as, say, a chili or a soup, then you probably want to tip the whole jar in.)

This does not seem to apply to thick tomato pasta sauces, presumably because the long, extended boiling times evaporate the water away. 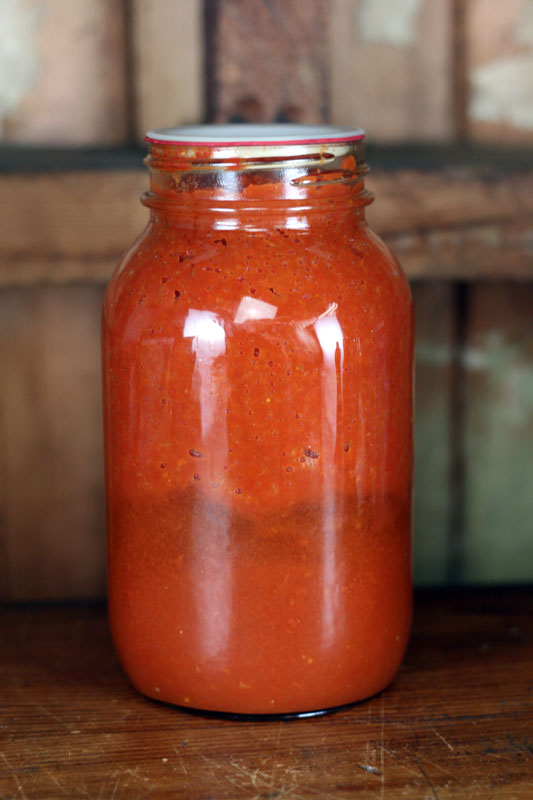