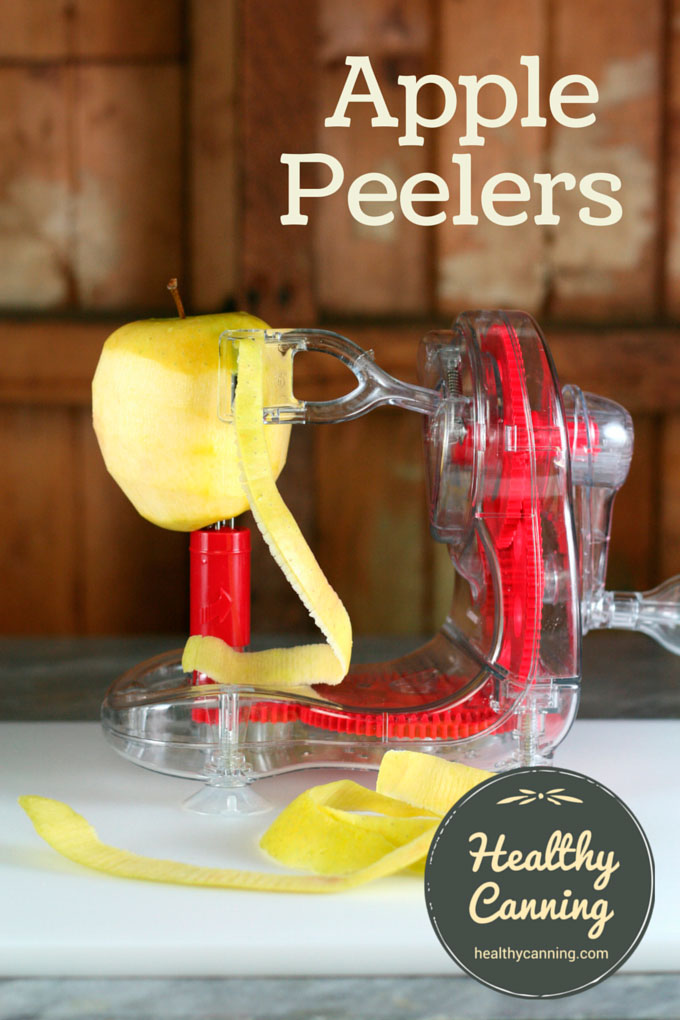 There’s a lot of variety to choose from. In fact, they are often referred to in the trade as “apple processors” because many models can do more than just peel — they’ll core and slice as well.

What are the options to consider?

Is any apple peeler machine really better than a competent person with a swift hand and a sharp paring knife?

Design of the machines

Apple peeling machines can be made out of plastic or metal or a combination of both, though the blade will always be metal.

A great many of the metal ones are essentially the same design / machine, at least in regards to their frame and basic parts.

The machines are usually operated by hand crank, though electric and battery-operated ones are now available.

Most operate horizontally, though a few operate more vertically.

All have a pronged-spike (usually three prongs, sometimes called the “fork”) that you impale the fruit or veg on, to hold it firmly in place while the blade does the peeling.

We’re not aware of any, not even the plastic ones, that are listed as safe for the entire unit to go into the dishwasher.

This video of Victorio’s apple peeler does a very good job of explaining the nitty gritty of a common metal design.

Note that most of the metal ones are of very similar design, though sold under different brand names at various price points. We haven’t had the occasion to research yet whether there was a patent that expired, making the design available to everyone.

One small complaint people have about the metal ones is that because they ship with the turning handle unattached (you have to use a screw driver to attach them), the machines won’t fit back into the boxes for storage with the handle on. (Some people say they just angle them into the boxes with the handle peeping out.)

This plastic one works more vertically, and comes with a separate wedger for thicker slices.

First wash the apples (or any produce being used), so that bacteria on the outside of the apple isn’t getting pressed into the flesh of the apple during the peeling process.

Centre your apple on the prongs and press it firmly in place.

As you turn the handle, most peelers move the apple towards the blade, though some instead move the blade to the apple. Some models allow you to push the apple manually more closely into position with the blade and then start turning the handle to save a few seconds.

Some machines core and slice at the same time as they peel.

Some machines come with a separate device that does the coring, and chops the apple into wedges.

The slices automatically produced (by the models that do) are usually quite thin spiral slices. Some reviewers feel that these slices can be too thin for pie fillings.

The ones that core and slice at the same time also generally let you “turn that feature off” —  some people may prefer to have the machine do just the peeling so that they can make their own, thicker slices for something like a pie filling.

Turning the core and slice feature off is probably a good idea if you are using the machine to help peel potatoes, as you would get some very cross looks if you presented the potatoes to the cook all cored and spiral sliced.

A wedger does the coring, while producing nice chunks of apple such as you would expect in a homemade apple pie filling. 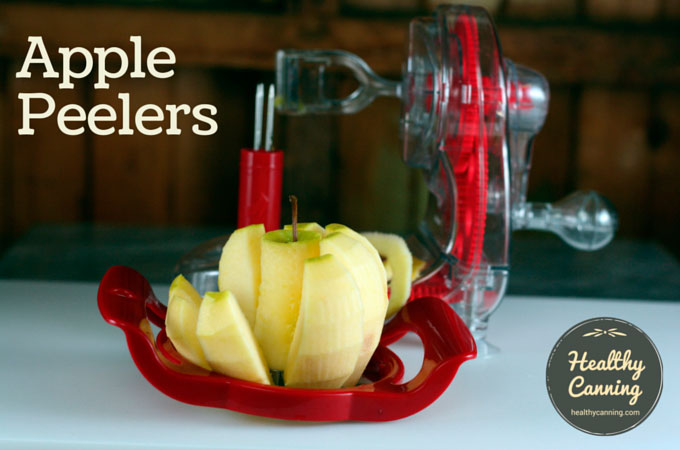 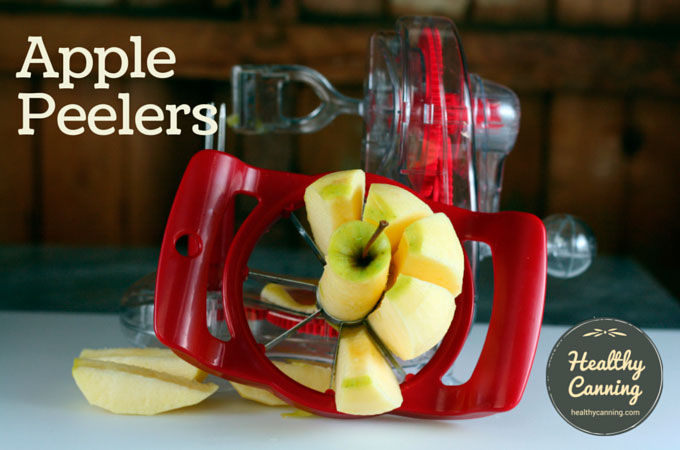 Not apple peeler will never work for every single apple

It can be a challenge to deal with differently shaped apples — most manufacturers have introduced spring-loaded arms that try to adjust to different curvatures. The spring-loaded arms, though, can get bogged down in the flesh of some softer apples.

Sometimes the produce can be a bit hard to dislodge from the machine afterward. It can take just a bit of a tug — though some machines now come with “ejector buttons” meant to assist. Apples are generally easy; a potato can be wedged on a fair bit more firmly.

Don’t throw away the paring knife: you will always need to do some clean-up, especially at the ends of produce where the machines can’t really get at the peel to remove it.

Here’s a video showing a peeler with an apple that is both soft and irregularly-shaped.

Though some commenters felt that it was indeed operator error in the above video, many other people can attest that sometimes you just get handed the “wrong kind of apple” for a peeling machine and it’s just best to do them by hand.

There are Pie Apples and Salad Apples which will be firm, as they are meant for slicing (and chopping). Other types of apples such as Cider Apples, Juice Apples, and Sauce Apples weren’t necessarily bred to be firm and hold their shapes, because for use they are mashed or crushed.

Many models can be used for peeling other things too such as potatoes, pears, etc.

One of the most fundamental choices to make in selecting an apple peeler model is how it affixes to the counter-top and which way might work better for you.

The two choices are suction cup, or clamp. The suction cup ones can go anywhere on your counter; the clamp ones, like the old-style meat grinders, need to be attached right at the very edge of a work surface that has some overhang to it.

Sharon Peterson, author of the Simply Canning blog, said in a video review from August 2012 that for her kitchen a clamp model is better for the simple reason that she has butcher block counter tops which the suction cups, given that they work best with very smooth surfaces, might have hard time getting a grip on.

Cooks’ Illustrated prefers the suction models. They didn’t like being forced by clamp models to work with a growing pile of messy peel right at the edge of a counter. They say,

The clamp-style models—too narrow for all but one of our countertops—lost out to those with a suction base, which also had the benefit of keeping the mess at the center (rather than the edge) of the work area.” [1] Apple Peelers. Cook’s Illustrated. September 2005. Accessed August 2016.

What does Cooks’ Illustrated say?

Cooks’ Illustrated gives some of the most respected reviews of kitchen equipment.

They reviewed apple peelers in 2005. They started out cynical about the idea in general, and many models confirmed their cynicism.

In the end, though, they said they found one model that justified the hype.

The task of peeling 5 pounds of apples—let alone coring and cutting them into ¼-inch slices—is daunting. And if there was ever a place for an apple-processing gadget (most of which are designed to handle all three tasks), our Deep-Dish Apple Pie was it. So we rounded up six models—and a bushel of apples—and headed into the test kitchen.

One by one, the peelers faltered, as testers found most to be more trouble than they were worth. The clamp-style models—too narrow for all but one of our countertops—lost out to those with a suction base, which also had the benefit of keeping the mess at the center (rather than the edge) of the work area. Once we’d managed to stabilize the models, performance of core tasks was hit-or-miss. When peeling, the gadgets either skimmed the apple’s surface or removed the peel along with a deep gouge of flesh. Slicing and coring proved even rougher—literally: Crisp apples had a tendency to crack or break, while mushy apples were processed to, well, mush.

One model, however, surprised testers by peeling, coring, and slicing every apple we could throw at it. Sleek and efficient, this model seemed like it would rival even the handiest test cook. But there was only one way to find out. We pitted the test kitchen’s best peeler (armed with a peeler, knife, and cutting board) against a test cook wielding our favorite peeling machine. The knife-brandishing test cook finished five pounds of apples in just 12 minutes. Not too shabby. The mechanized gadget? Just under four minutes.

Naysayers suspected wastefulness, but the two finished piles of apples weighed in within a few ounces of each other. We’re sold.” [2]Apple Peelers. Cook’s Illustrated. Ibid.

Again, bear in mind that their review dates from 2005.

The model they really like and consequently highly recommend is the “Back to Basics Apple Peeler.” 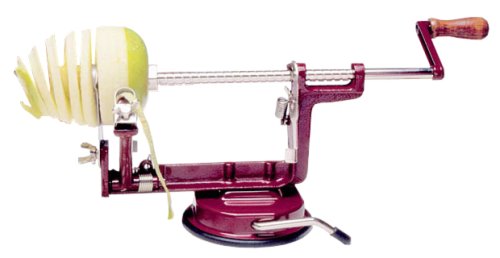 Tagged With: Apples
If you need FAST or relatively immediate canning help or answers, please try one of these Master Food Preserver groups; they are more qualified than we are and have many hands to help you. Many of them even operate telephone hotlines in season.