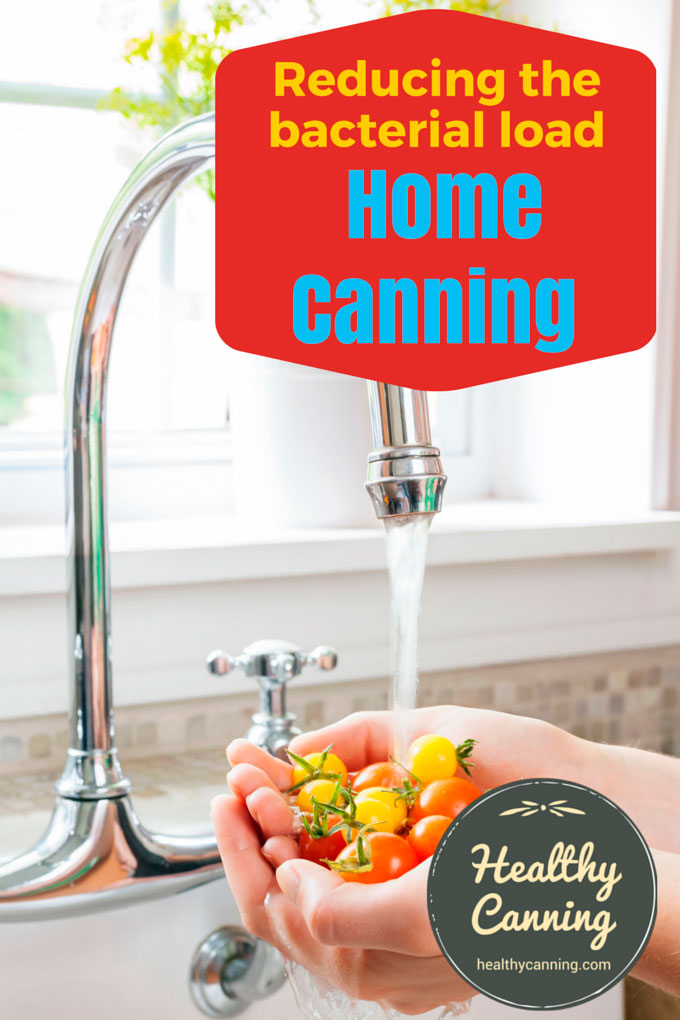 An important part of canning prep is reducing the bacterial load — getting rid of as much bacteria as you can easily by good preparation practices before you seal food in jars.

The fewer bacteria going into your canner, the fewer to be killed off.

For example, proper handling of fruits and vegetables prior to use, such as washing and culling may also help to reduce spore loads…”   [1] Arritt, Fletcher. Introduction to Acid, Acidified and Fermented Foods. North Carolina State University. Presentation. February 2013. Accessed July 2015.

It’s not just a matter of numbers, either. Research has shown that the more bacteria present, the more resistant each of those bacteria actually is in its own right for some reason:

Resistance of spores to heat destruction was demonstrated to be related to the number of organisms present. The greater the number of spores per unit of volume, the higher the resistance of those spores. Bigelow and Esty (1920) studied the thermal death point of different cultures of thermophiles, not well identified in their research report, by varying the initial concentration of spores. They found that the larger the number of spores present in corn juice, the longer the time necessary to destroy them at three process temperatures. ”  [2] Andress, Elizabeth L and Gerald Kuhn. Critical Review of Home Preservation Literature and Current Research. Athens, GA: University of Georgia, Cooperative Extension Service. 1998.

Factors in reducing the bacterial load include:

[To be clear: reducing the bacterial load does not obviate the need for subsequent proper processing, be the product being canned blackberry jelly or meat.]

The Wisconsin Department of Agriculture says,

Use clean equipment that has been effectively sanitized prior to use; clean work surfaces and then sanitize with bleach water before and after use.”  [4]Wisconsin Department of Agriculture. Home Canned Foods Accessed March 2015 at https://datcp.wi.gov/Food/Home_Canned_Foods.

It’s just basic, but the Putting Food By authors felt that some people needed a reminder to use clean, safe water in prepping your food for canning:

The water must be fresh and at least of drinking quality. A staggering number of spoilage micro-organisms are added to food by impure water. Therefore: Don’t assume that “it’s-going-to-be-cooked-anyway” will counteract all the extra contamination. Remember that an excessive bacterial load can tax your preserving method beyond the point where it is effective… In any step of preserving food, don’t use any water that you cannot vouch for as safe to drink.

In the late 1970s an outbreak of botulism from home-canned food was traced to the soil-borne bacteria in a family’s water supply; the canning procedures were not able to deal with them. And change wash-water often, or wash under running tap water you would drink.”  [5] Hertzberg, Ruth; Greene, Janet; Vaughan, Beatrice (2010-05-25). Putting Food By: Fifth Edition (p. 28). Penguin Publishing Group. Kindle Edition.

Soil contains microorganisms. Some are difficult to kill. To remove soil and decrease the number of microorganisms present, wash fruits and tomatoes — even foods that will be peeled. Do not soak the produce, but instead, lift it out of the water. Use several changes of water.”  [6] National Center for Home Food Preservation Self Study Course. Module 3. Canning Acid Foods:  Preparation. Accessed March 2015.

Ball is changing some of its washing recommendations. They are switching from several washes in a sink of water, to one wash under running water. The switch to running water might be jarring news to people on well-water, or to the increasing number of people being switched to water meters by their local municipality. It’s possible Ball views the running water as being better at carrying away germs, but we can only speculate as no reason for the seemingly un-environmental change is given.

On page 70 of the 36th edition (2013) of their Blue Book, Ball called for green beans to be washed a few times: “Wash beans in several changes of water.” (Though on page 66 of the same book, they were less specific saying only: “Wash beans, drain.”)  In the 37th edition (2014) of their Blue Book, on page 111, Ball changed the green bean washing procedure by calling for running water: “Wash beans under cold running water, drain.”

4. Peeling vegetables when told to

When canning directions say peel, you have to peel, regardless of what your modern foodie instinct says.

Vegetables such as beets, carrots, potatoes, parsnips, rutabaga, squash, turnips, etc must be peeled before home canning. Peeling them reduces the microbial load on the food, and pressure canning times for such vegetables were developed based on their peeled state with reduced microbial loads. Leaving the skins on for canning, with the subsequent increase in bacteria left on them, would require testing to see if different processing times are required.

At this point, no one has asked offered funding for an answer to be researched. The National Center for Home Food Preservation (NCFHP) says,

Although we do not know all of the exact reasoning from USDA when the canning process was developed for carrots to be peeled, it is true that we only recommend canning procedures as they were developed during laboratory testing. One important difference to canning between peeled and unpeeled carrots is the potential difference between bacterial loads going into the canner. In other words, removing the peel from carrots substantially reduces the amount of bacteria on the carrots. Carrots with peel left on, even if washed well, would likely contain more microorganisms when compared to peeled carrots. Before recommending canning carrots with peels left on, we would need to see product development testing that accounted for the increased microbial load and any other possible changes with peel included in the jars. Although you don’t see much reduction in fiber after canning, you will still lose some of the nutritional value in the peel that comes with heating and sitting in water, just as you do with the flesh of the peeled carrot. There is no nutritional analysis or comparison available for carrots canned with or without peels, especially since carrots canned commercially do not contain the peel, and those are the source of most of our nutritional values for canned foods. As for all those carrot peels, well, at least at home the peels could be turned into excellent compost!” [7] National Center for Home Food Preservation. Preserving Potatoes. Blog entry 6 October 2014. Accessed March 2015.

All the old-time canning advisers, such as Ball and the USDA, could have done better in the past about giving reasons for why they advise you to do things. Especially in things such as “why peel”, which now goes against the grain of what all the other government health departments are telling us (leave the peel on for nutrients and fiber.) At least now we have the NCFHP to try to help us understand, thankfully.

To be clear, reducing the bacterial load (even if you boil jam for an hour first) does not negate the need for proper processing: following research-based times of the food and jar as a whole sealed and sterilized together as one unit during the processing.

And, the safety margins built into tested home canning recipes to account for slip ups, deliberate or intentional, are admittedly huge.

But still you are expected to do your part in the process by reducing the bacterial load through proper measures.

In any event, there you have the why. It’s a critical safety step.