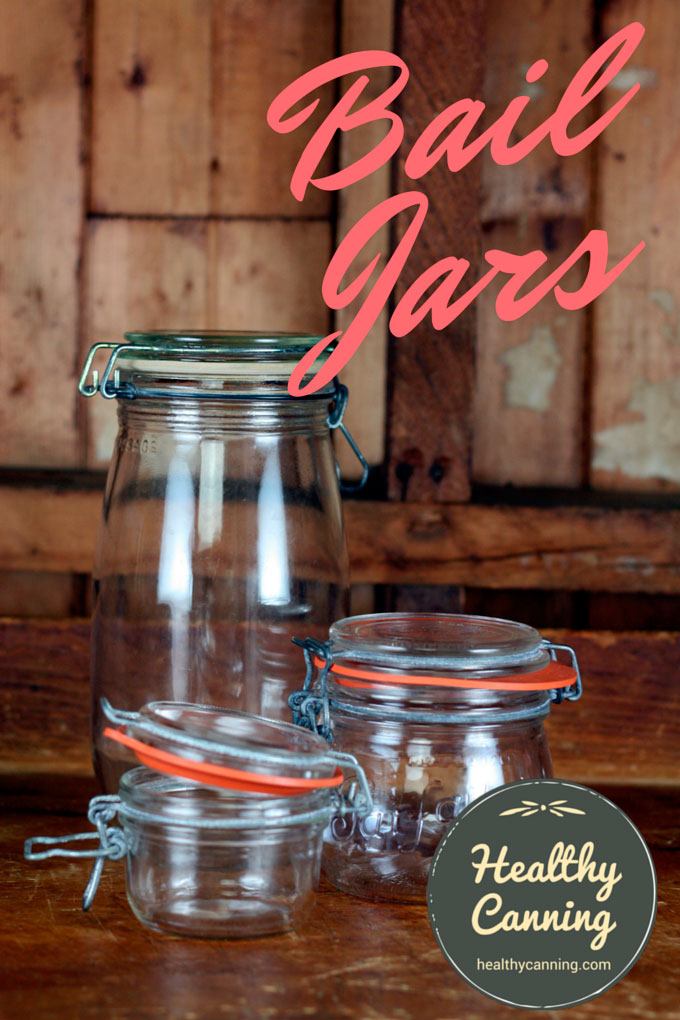 Bail lid jars have a two-part wire clasp attached to the top of them. Newer-style French Le Parfait, English Kilner and Italian Fido jars operate on this principle. Older-style bail jars, made in the first half of the 1900s, were known as “lightning” jars or “toggle closure.”

The use of bail-type closure jars for shelf-stable home canning and preserving has been recommended against for more than 25 years now.  They are recommended only for dry or refrigerated storage.

For the record, we are going to cover the theory of how they work, but this is not an endorsement of them for home canning. Healthycanning.com often uses them for refrigerator pickles and dry storage, but never for actual canning.

The directions that were commonly issued were to clamp the lid half-way shut. This would hold the lid in place, but in a way that the lid was still just loose enough to allow air to vent out of the jar.

After processing, you removed the jars from the pot, and pressed the front clip hinge down the final step. It would lock into place. This held down the glass lid very firmly on top of the hot and supple rubber seal. As the jar cooled, a seal was supposed to take effect.

Note that research done in 1935 contradicted the standard advice that had been given out. (Maclinn, Walter Arnold. Some internal physical conditions in glass containers of food during thermal treatment. Master thesis. University of Massachusetts. 1935.)

“Preliminary data indicate the possibility that glass jars equipped with wire clamps may be processed (sterilized) while closed (clamps down). This is contrary to present custom, but if possible will effect a considerable saving of time, greater convenience and possible superior quality in the resulting food. A review of the literature shows a minimum of research on glass containers and especially on the method of processing metal clamped, glass covered jars.

From extension specialists in home preservation has come word of various instances of processing glass jars with covers sealed tightly (clamps down) with good success. The object of this research project is to ascertain the pressure conditions within a jar of food during processing with a view of determining the safety and practicability of subjecting the fully sealed jar to the final process or heat treatment. Of course, the usual procedure followed at present is to only partially seal the jar, the seal being completed after processing.” (Page 2)

The results of the subsequent research suggested that processing was best done with the lid fully clamped. The researcher presented the following findings (Page 26):

[To be clear: this is all just of historical interest only, and does not reflect current home canning advice.]

Today, both Kilner and Le Parfait, which continue to sell bail-type jars, call for the jar clamp to be fully locked during processing of the jar. When the jar has cooled after canning and the seal formed, the bail is simply unlocked and left unlocked. 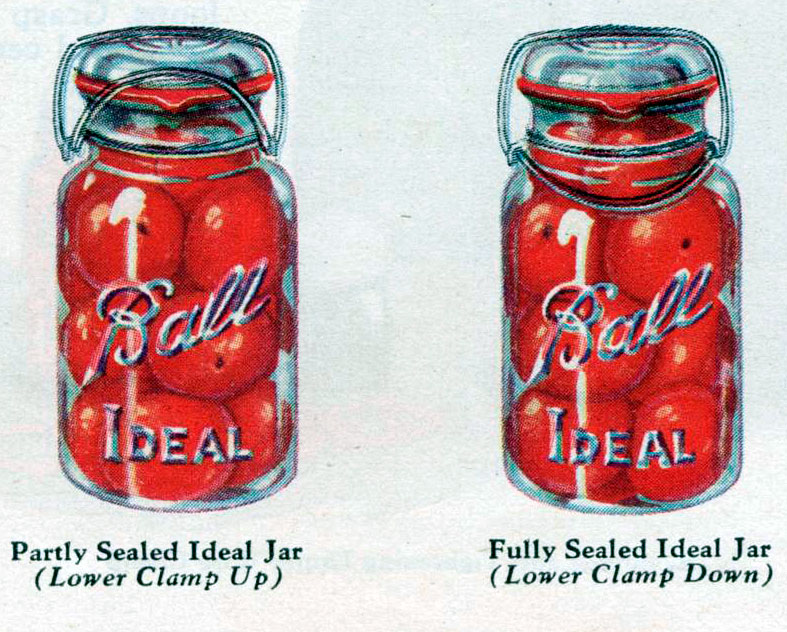 A popular clip-type bail jar brand made in England is Kilner. The manufacturer advises on how they think you should check that you have a seal after processing, and how you should store the jars afterward:

A popular French brand is Le Parfait. Le Parfait advises to check the processed jars in a similar fashion, but, they advise instead to leave the bail unclipped:

Let the jars or terrines sit for a few hours until they are completely cooled, then check that each one is perfectly airtight by unfastening the clamp. The lid must stay sealed to the jar and resist to pressure…. In order to keep your preserves several months, … do not re-clamp the closing system.” [2]How to make your own preserves? Step 7: Check and store the jars. https://www.leparfait.com/how-to-make-your-own-preserves [Ed: Caution: do not use any of the canning procedures or techniques described on the Le Parfait web site]

To open a sealed bail-type jar, you pull on a rubber tab that is on the rubber ring. 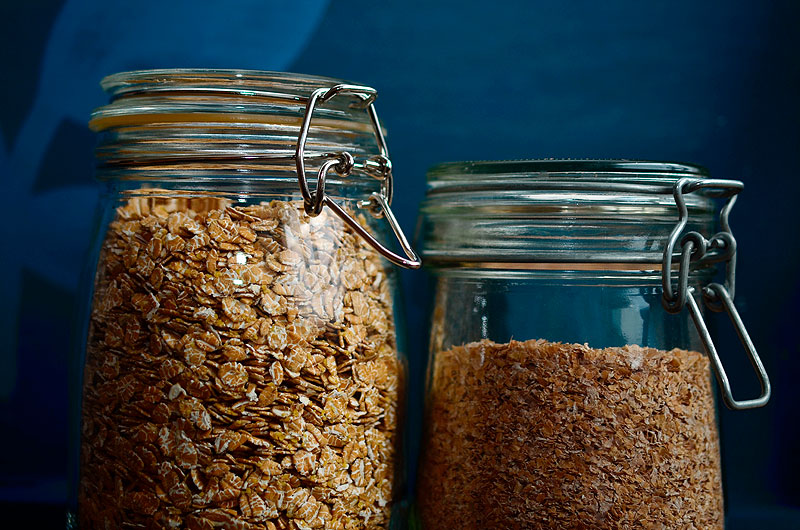 Why bail-type jars are currently recommended against

Jars requiring a zinc cap and jar rubber or jars requiring a glass lid, wire bail, and jar rubber have not been recommended since 1989 because there is no definitive way to determine if a vacuum seal is formed.”  [3] Griffith, Patti. The time is ripe for summer melons. University of Wyoming Cooperative Extension Service. From series “Canner’s Corner: Enjoying Summer’s Bounty.” Issue Two. MP-119-2. Accessed March 2015

Old jars and closures have a nostalgic appeal many people like; however, they are not considered the best type of jars and closures for home canning. Jars requiring a zinc cap and jar rubber or jars requiring a glass lid, wire bail, and jar rubber have not been recommended since 1989. There is no definitive way to determine if a vacuum seal has formed. This is one reason why the two-piece vacuum cap is superior to older style closures.” [4] https://www.freshpreserving.com/tools/faqs

Is there any other reason why WECK does not produce home-canning jars with mechanical sealing devices? Yes, and it’s a reason of utmost importance: Your personal safety. In case the contents of a jar should spoil for any reason the gases formed by spoilage inside the jar must be free to push up the lid so that it lies loosely on top of the jar. This warning signal is so clear and strikingly plain that it is best suited to protect you and your family from the dangers of consuming spoiled canned food unknowingly. For this extremely important reason of personal safety, a reason which is still more important than the practical ones mentioned above, WECK has consistently refused to produce jars with mechanical wire bail seals for home-canning purposes. In case of spoilage, these mechanical seals cannot produce the strikingly clear warning signal of the loose lid. [5] Weck canning notes. Accessed March 2015.

The US taxman doesn’t even officially recognize these jars any more, for import purposes, as “preserving jars”:

Glass articles with wire bails and glass or porcelain caps or lids were considered not classifiable as ‘preserving jars of glass” as their physical characteristics do not allow them to be recommended for home canning use.”  [6] Department of the Treasury Customs Service. Tariff Classification of Imported Glassware. Federal Register Volume 61, Number 2 (Wednesday, January 3, 1996). FR Doc No: 95-31593. Pages 223-229. https://www.gpo.gov/fdsys/pkg/FR-1996-01-03/html/95-31593.htm

For the record, there actually are at least a few ways that glass lids could be tested for vacuum. (Pointing that out is not a usage recommendation; it’s just to be intellectually thorough, as Healthy Canning strives to be.) 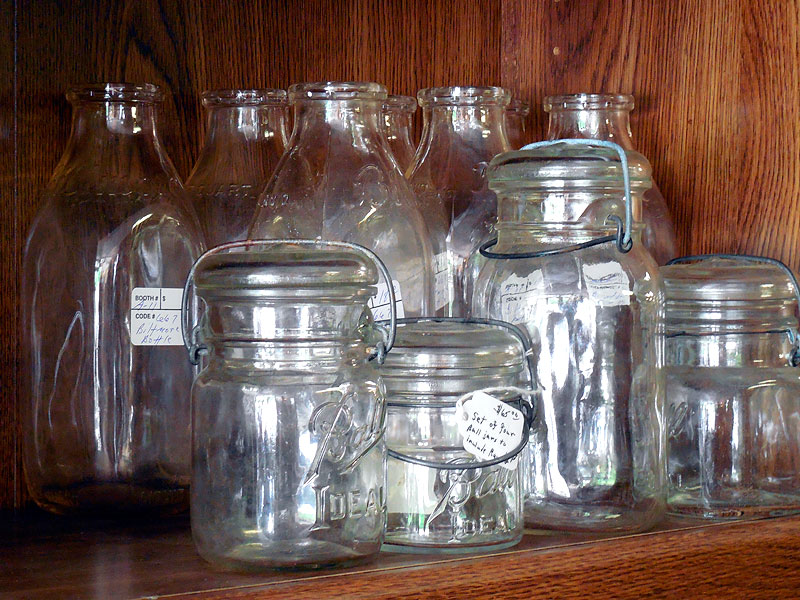 For antique North American bail jars known as “lightning”, you leave the other wire clasp standing up loosely at the side; it will usually go to about a 45 degree angle, and be somewhat loose but still attached of course.

Montana Extension Service gave these directions in 1947 for the lightning-type bail jars:

Here is a diagram of how the North American ‘lightning’ bail jar worked. 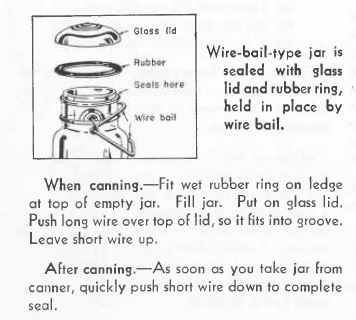 Here’s what the authors of Putting Food By say about these lightning jars,

Old-style Bailed Jars with Glass Lids: Not recommended for Pressure Canners because they’re likely to be battle-weary, these haven’t been manufactured since the early 1960s—but there are still thousands around. Sometimes called ‘lightning’ or ‘ideal’ type, they have a domed glass lid cushioned on a separate rubber ring that seats on a glass ledge a scant ¼ inch (½ cm) down on the neck of the jar. The lid is held in place during processing by the longer hoop of the two-part wire clamp. As you remove the jars from the canner after processing, snap down the shorter spring-section of the clamp so it rests on the shoulder of the jar. This is what we mean by ‘complete the seals if using bailed jars’ in the individual instructions. FITTINGS FOR BAILED JARS Discard any lids that have rough or chipped rims, or whose top-notch (which holds the longer hoop in place) is worn away. Sometimes the wire bails are so rusted or old or tired that they have lost their gimp and can’t hold the lid down tightly. Please don’t go in for makeshift tightening by bending the wires or padding the lids. Retire the jars…. [They] can still be found (used) but have not been made for years, thus their fittings (and safety) are suspect. Rubbers are still sold in boxes of twelve, and come in standard and wide-mouth sizes. Look for the rubbers in online canning-supply stores. One source is Kitchen Krafts, which markets them as “regular rubber jar rings.” Call 1-800-776-0576 or go to www.kitchenkrafts.com. Never re-use rubbers, or use old, stale rubbers that have been hanging around for years. Stretch rubbers gently and only enough so they’ll go over the neck of the jar. To sterilize: boil jars and lids for 15 minutes, and let them wait, covered by the hot water, until used. But don’t boil rubbers: wash well, then put them in a shallow pan, cover with boiling water, and let stand till used.”  [8] Hertzberg, Ruth; Greene, Janet; Vaughan, Beatrice (2010-05-25). Putting Food By: Fifth Edition (pp. 66-67). Penguin Publishing Group. Kindle Edition.