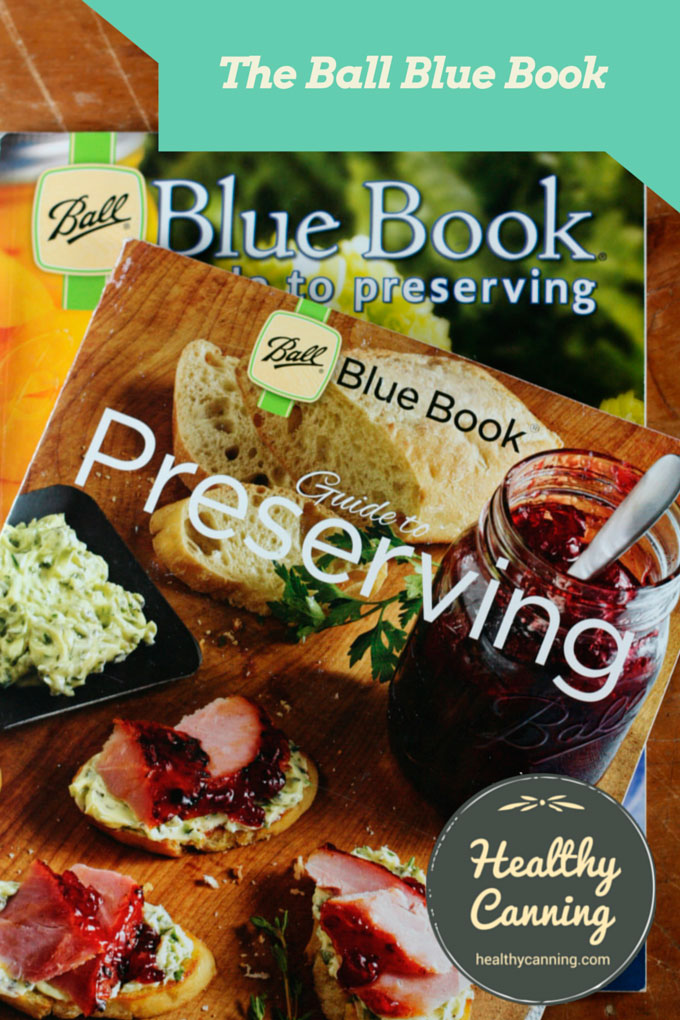 The Ball Blue Book is one of the main books in the accepted American canon of home canning.

About the Ball Blue Book

The Ball Blue Book provides recipes and procedures for water bathed home preserves, as well as basic procedures and some recipes for pressure canning.

All of their recipes are lab-tested for safety. Although a given recipe (say, Mustard Pickle) might appear to violate the general rule of thumb of “no flour in canning recipes”, such a recipe passes muster with flying colours owing to a higher rule: lab-tested by Ball.

The goal of the Ball Blue Book likely isn’t for the Blue Book to become a huge profit centre in itself; the goal likely is for it to promote home canning and via that, the Ball products. It’s a sampling of recipes designed to appeal to the broadest possible audience. There’s a lot of emphasis on plain foods — which you can then use as “plain ingredients” when you open the jars to make something from combining them all in a recipe.

Often, when a new Blue Book is released, Ball will say that it supersedes previous Blue Books and you should cease using them, but with the release of the 37th edition in 2015, Ball said that the previous Blue Book, the 36th edition in 2013, was still valid.  [1] Ball Canning: “Hi Randal, the new version is updated with new recipes and additional tips and tricks and can be used in conjunction [with the 2013]” Ball Canning Rep on Facebook to Randal Oulton 9 February 2015. Correspondence on file.”

Just because a recipe isn’t in the current Blue Book doesn’t necessarily mean it’s not safe anymore; it could mean that it hasn’t been judged by the Blue Book editors as appealing to enough people at the present time to be fit into their limited space for each production run. Old-timers say that over the years Ball will prune recipes — not necessarily because the recipes are no longer safe, but sometimes just because tastes have changed. If you are wondering about a recipe in an old Blue Book that isn’t in a current one, ask Ball customer service before using the recipe, and they will tell you if it’s still considered safe or not.

Compared to other publications by the mother ship known as the “Newell Corporation” (previously Jarden) the Ball Blue Book focusses more on ‘standard’ recipes. Other Newell publications such as the Bernardin Guide, the Ball Complete, etc, are considered to offer more “gourmet” approaches to home canning. The Ball Complete Book (labelled the Bernardin Complete Book in Canada) is written in Canada and is a compilation of recipes from Ball, Bernardin and Kerr. It has more recipes than the Blue Book but note: not more pressure canning recipes. The pressure canning recipes are essentially the same as those in the Blue Book.

Criticisms of the Ball Blue Book

One criticism that a new generation of canners has of the Blue Book is that it continues to give imprecise measures such as “1 quart chopped onion”, and then tell people not to deviate one iota in measurements or they will poison everybody. Ball has attempted to address this somewhat in the 37th edition by being more wordy and attempting in some places to precise exactly what they mean by “coarsely chopped cabbage” in a particular recipe.

Many of the new wave of canners also wish that Ball simply just gave weight equivalents for such ingredients as “1 quart medium-coarse chopped cabbage.”

Another criticism is that the recipes shock new canners with the huge amounts of salt and refined sugar called for; many people simply choose not to use the book for this reason, and turn to (often untested) Internet sources instead. 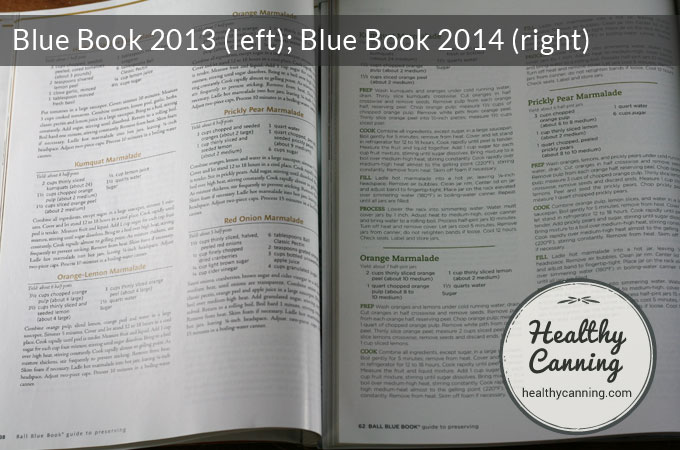 The recipes are more wordy in the 2014 37th edition, in an attempt to help people understand the measurements more.

Mistakes in the Ball Blue Book

The Blue Book compilers do make some editorial mistakes.

In the 2013 36th edition, Ball withdrew the Squash Pickles recipe that had been in 2010 Blue Book, without saying why, though leaving a ghost index entry pointing to it on page 57.

In the 2014 37th edition, the Hot Rhubarb Grilling Sauce recipe on page 128 was missing the processing time (should be ½ US pints for 10 minutes), and the processing directions for mushrooms (on page 114) was omitted from the index.

In 2015, Ball accelerated its push into overseas English-speaking countries. It was already in Australia, and expanded into South Africa and the United Kingdom. It opened in the UK in June 2015. [2] Jarden Corporation Press Release. Preserving the British Summertime. Accessed February 2016 at http://www.jarden.com/latest-news-media/press-releases/preserving-british-summertime.

These countries now have close to two generations of people who grew up not knowing the old English-based measurements that Americans still use; they have grown up knowing only metric. (For Australians, Ball had previously attempted to bridge the gap with a measurements conversion chart.)

To support this expansion, in 2015 Ball released a metric edition of the Ball Blue Book. 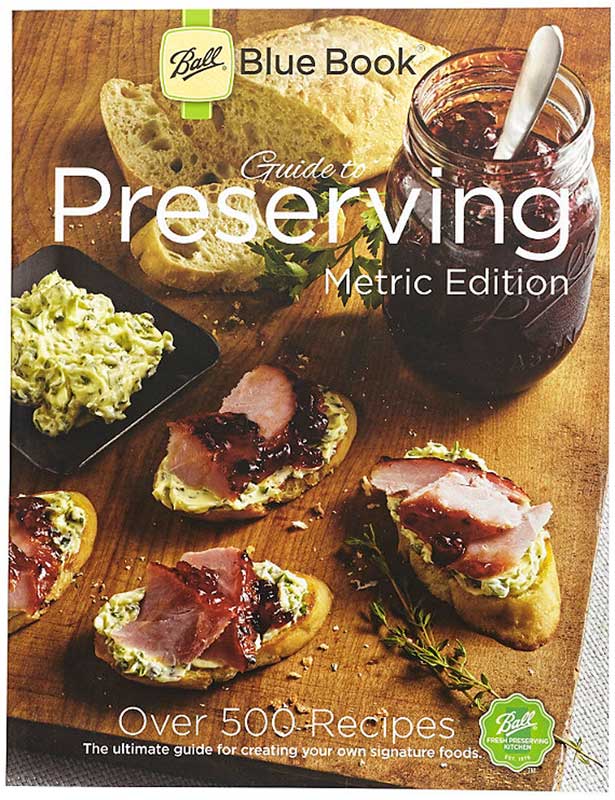 As of February 2016, the Ball Blue Book Metric Edition appears to only be sold in the UK, particularly through Lakeland stores. We will provide updates on other locales as we learn of them. Update: As of 2021, Lakeland is listing it as discontinued.

History of the Ball Blue Book

“The idea for today’s Ball Blue Book Home Canning Guide was originally developed in 1909 by George A. Ball and his wife, Frances Woodworth Ball. The earliest-known version was called “The Correct Method for Preserving Fruit.”  [3] Jarden Home Brands. Special Jars of the Past. 2007. Accessed March 2015.

Here are the subsequent editions we know of (to be clear, the list may not be exhaustive: it’s the editions we are aware of.)

The first ever metric edition was released in 2015 for the UK market.

Many things have been added and taken out of the Blue Book over the decades. One item was, for instance, advice on how to can frog legs, which appeared from 1930 to 1947, and was then withdrawn. 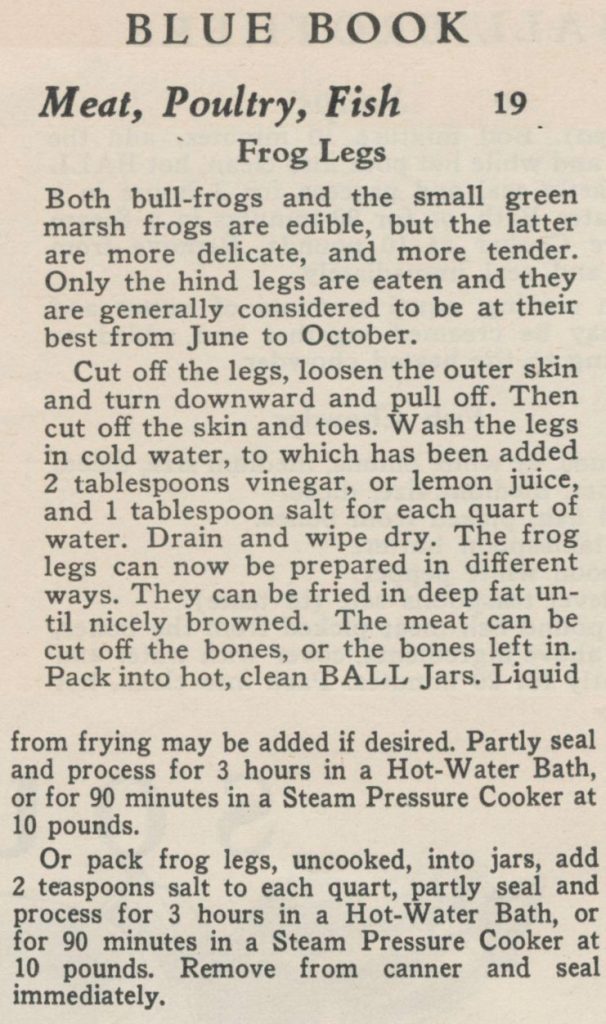