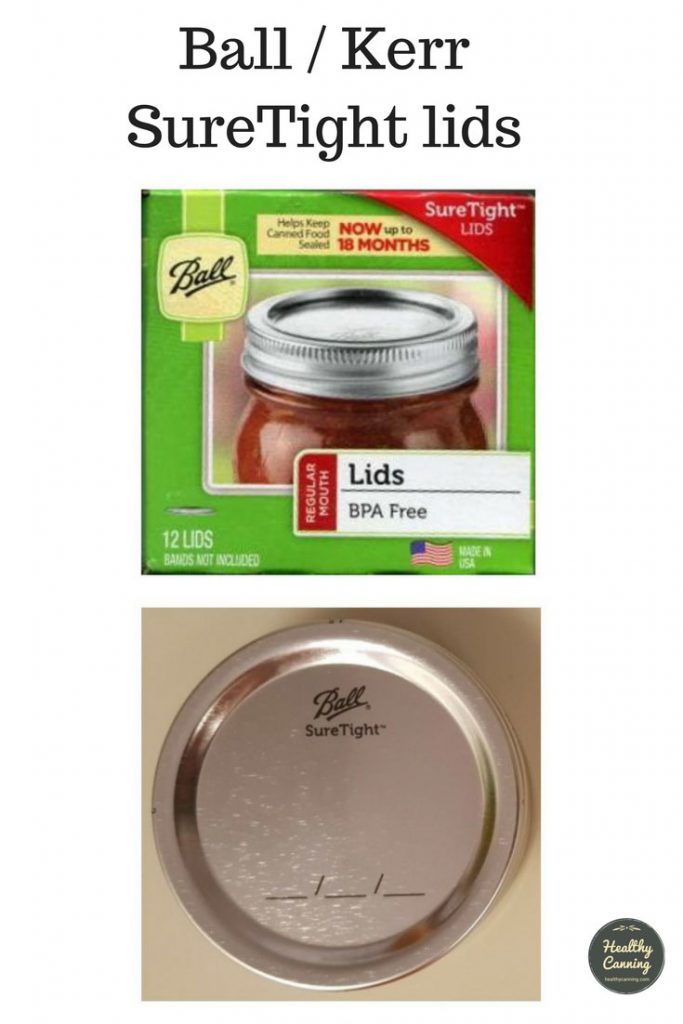 In the spring of 2017, new SureTight™ lids were released for home canning by the Jarden (Newell) company. A press release at the time said they would be sold under the Ball® and Kerr® names.

The SureTight name corresponds with the ‘Sure Tight™ Band Tool that Ball released in 2012.

To be clear: “Current lid supplies are safe to use and will be sold until they are gone.”  [1]Blakeslee, Karen. New Ball® Sure Tight™ Lids – 2017. Kansas State Extension Service. 28 March 2017. Accessed 5 April 2017 at https://www.rrc.k-state.edu/preservation/doc/suretightlids2017.pdf So if you’ve got stockpiled lids from end of season sales, go ahead and use them up with confidence.

What is changed about the new Ball lids

Ball said that the changed lids represented the most significant improvement in home canning lids in the past 30 years. [2]Ed: This being 2017, we’re not quite sure what changed 30 years ago around 1987. The change from rubber to plastisol gaskets was made in 1969.

“…the most significant improvement in canning closures in over 30 years, Ball® and Kerr® Sure Tight™ Lids will now feature twice the tinplate coating providing additional rust resistance, ensuring the life of the seal for up to 18 months. With over 130 years of research and testing, Ball® and Kerr® home canning brands offer the most trusted lid on the market, always BPA-free and made in the USA.” [3]Rokose, Wendy. Beloved Ball® Canning Jars Get New Look For 2017. Press release. 5 April 2017. https://ir.newellbrands.com/investor-relations/press-releases/press-release-details/2017/Beloved-Ball-Canning-Jars-Get-New-Look-For-2017/default.aspx 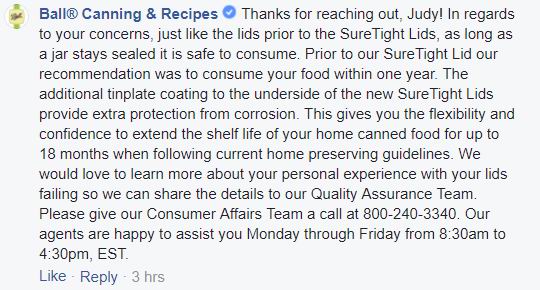 Despite the doubling on the tinplate coating, Ball emphasized that consumers will not see a visual difference or feel a weight difference.

In December 2017, a Ball representative posted this information to their Facebook page:

We’d like to share some information about the modification to our lids to help dispel any misconceptions you may have. Let’s begin with the construction of home canning lids. Ball and Kerr lids are made up of five different materials. We start with a core base of steel sheeting, applying an ultra-fine tinplate coating to the top and twice the tinplate coating on the underside. A BPA-Free base coating is then applied to the underside and a BPA-Free top coating is applied to both the top and underside of the lid. The sheets of tin-plated steel are stamped out to create regular and wide mouth lids. Lastly the plastisol is poured into the channel on the underside of each lid.” [5]https://www.facebook.com/BallCanning/videos/1489624831085501/?comment_id=1490402501007734&reply_comment_id=1512934088754575&notif_id=1513284241738928&notif_t=video_reply&ref=notif

The new “good for 18 months” seal seemed to imply that Ball was also extending the shelf life of home canned goods to 18 months. So we asked Ball outright, and got this answer:

When using the new SureTight lids & following a tested/approved recipe for safe home food preservation, the new shelf life will be up to 18 months.” [6] Ball Canning to Randal Oulton via Facebook. 5 April 2017. Correspondence on record.

This is absolutely a change for Ball. Ball had always hewed to the USDA guideline of 12 months being the “best before” date.

As recently as 2014, Jessica Piper from Ball said,

The shelf life of your canned food is one year. So again, if you decide to hold onto that food longer, you are losing possible colour, quality, and most importantly the nutrient value. We always adhere to USDA guidelines and that is, once you’ve preserved that food, you have one year to eat that to get the best nutritional value out of that.” [7] Jessica Piper. Video: Canning Lids 101. 08:30. Accessed March 2015 at https://ball.yourbrandlive.com/c/lids/

So it would appear that Ball is now diverging from the USDA guideline on shelf life.

Kansas State was the first cooperative extension to weigh in publicly on the new lids. Their response to the shelf life change is as follows:

The USDA recommends that for best food quality, store home canned foods in a clean, cool, dark, dry location at a temperature between 50 and 70°F [10 to 21 C.] It is also recommended for food quality purposes that you can no more food than you will use within a year; however, there is no specific shelf life for home canned foods.” [8]Blakeslee, Karen. New Ball® Sure Tight™ Lids – 2017.

Healthy Canning has communicated with a few other USDA / extension sources on this, and though they have yet to release their responses as of time of writing, it appears that the USDA and the extension services will not be changing their shelf-life recommendations.

To be clear, those recommendations are and remain: for optimum quality, try to use up your home-canned goods within a year. After that, just rotate them to the front of the shelves to make sure they get used up first and not buried behind newer stuff. They are perfectly good as long as the seal remains intact (and were processed using a tested recipe, of course.) By no means throw them out (unless your audience has decided they hated that particular item and will eat no more of it for love nor money.) You might just start to experience lessening of colour, nutrition and maybe texture as time passes — in short, the same as for store-bought canned and bottled goods!

For an in-depth discussion, see: What is the shelf life of home canned goods?

This is the first time that we are seeing an official firm statement in writing that unused lids are “good for up to 5 years.” Previously, the recommended “stock ahead” period for unused lids was a year ahead, or occasionally someone from Ball would admit to the possibility of 3 to 5 years shelf life before using.

Some industry insiders have expressed surprise to us that rusting lids were a major consumer complaint needing addressing. They said that what canners did complain about was impacted gaskets from lids that shipped on top of jars. And when people did mention rusting, it wasn’t the lids, it was the screw band canning rings, which tend to start rusting after just two or three uses.

There was also confusion amongst industry insiders about “ensuring the life of the seal for up to 18 months.” Ball had never before said that there was a limit to how long the seal would hold. The assumption for decades was always that the seal would hold (for decades) until the jar was deliberately opened unless the jar was damaged, or, gases from improperly processed food items destroyed the vacuum inside the jar.

Previously, any seal guarantee restriction from Ball centred around “one-time use”: they’d only guarantee a seal on unused lids. From a 2014 video:

If you want to guarantee the best food safety, for everything you are putting into your jars and you are putting away for the winter that you plan to share with your family and friends and loved ones, one-time use, that’s all we can guarantee with this.” [11] Jessica Piper. Video: Canning Lids 101. 15: 45.

Where are SureTight lids made

In a press release announcing the availability of the lids, Newell (the owner of Ball) said, “Ball® and Kerr® SureTight™ Lids will now feature twice the tinplate coating providing additional rust resistance, ensuring the life of the seal for up to 18 months …. always BPA-free and made in the USA.” [12]Newell Brands. Beloved Ball® Canning Jars Get New Look For 2017. 5 April 2017. Press release. Accessed November 2017 at https://ir.newellbrands.com/investor-relations/press-releases/press-release-details/2017/Beloved-Ball-Canning-Jars-Get-New-Look-For-2017/default.aspx

What Ball said previously about why jar seals may fail

Previously, Ball had said that jars would not come unsealed if food was processed according to USDA guidelines

We always recommend following current USDA guidelines. So, all of our recipes follow those guidelines, they’ve been thoroughly tested here in our quality labs. We know that if you follow those recipes they’re going to be safe. And because they’re safe and processed correctly, you don’t have to worry about lids coming unsealed.” [13]Jessica Piper. Video: Canning Lids 101. 04:40.

Ball had said the causes for lid seal failures were (1) using untested recipes, (2) not following recommended processing methods, (3) adjusting the screw-bands after processing, and (4) not leaving correct headspace.

Can you talk about the major reasons lids may come unsealed after processing? Sure! The number one reason why lids come unsealed, based on the calls and everything that we get into our consumer affairs department, is when someone is using a personalized recipe, something that is your own, it’s not been tested…. [Not] following a tested recipe including the proper processing is the number one reason why lids come unsealed. Lids can also come unsealed if after you remove them from your canner… and notice your band is a little loose and you go, oh I’ll just tighten it a little bit…. Also too head space can cause things to unseal.” [14]Jessica Piper. Video: Canning Lids 101. 25:34.

Presumably, all these causes of seal-failures are still valid concerns, despite the double tin-plating.

In December 2017, a Ball representative said, on their Facebook page, that the new lids have not resulted in any increase in seal-failure complaints:

There was confusion at first in various press releases as to whether the spelling was Sure Tight (with a space) or SureTight (no space) but it’s the no-space version of SureTight that has been printed on boxes and on the lids themselves.

Note that Ball’s jar lid tightening tool named “Sure Tight” does have a space in the name: Sure Tight Band Tool.

What does this mean for Bernardin lids?

The biggest non-secret in the room over the years has been that Ball, Bernardin and Kerr lids are the same; they are just stamped with different branding on them. They are presumably made in the same factory. 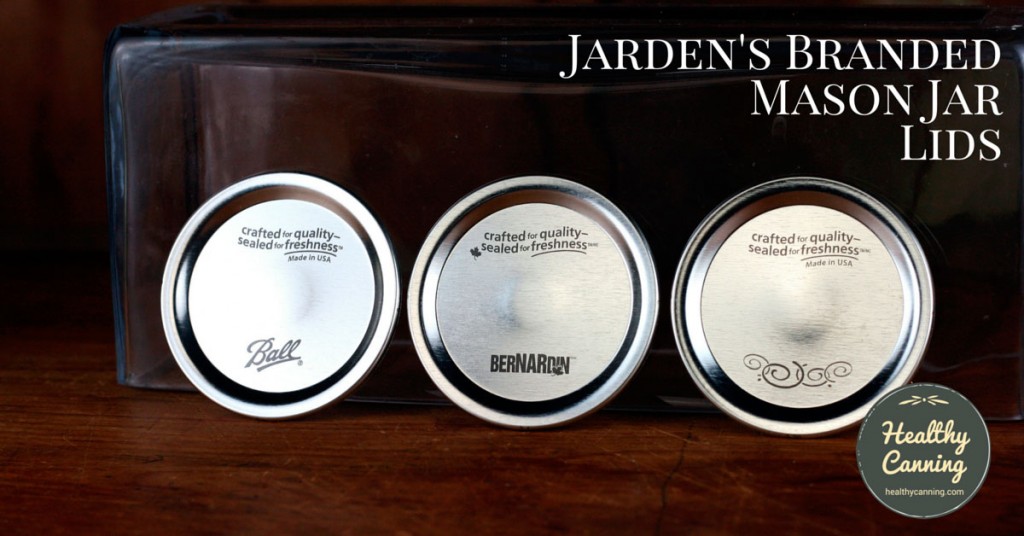 Presumably, then, Bernardin lids would get the same “upgrade” as for the Ball and Kerr lids.

That raises some questions though, that we’ll have to dig for the answers on and get back to you. 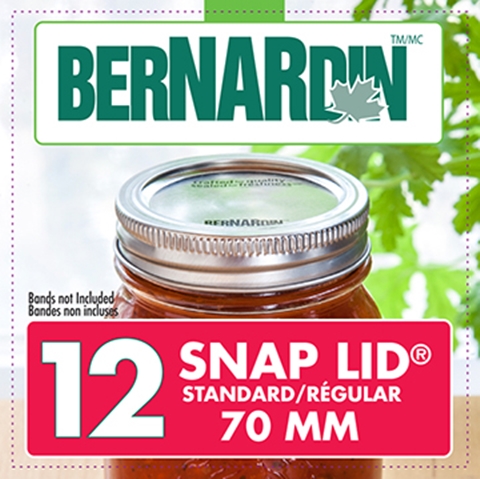 What would cause a canning jar to lose its seal?