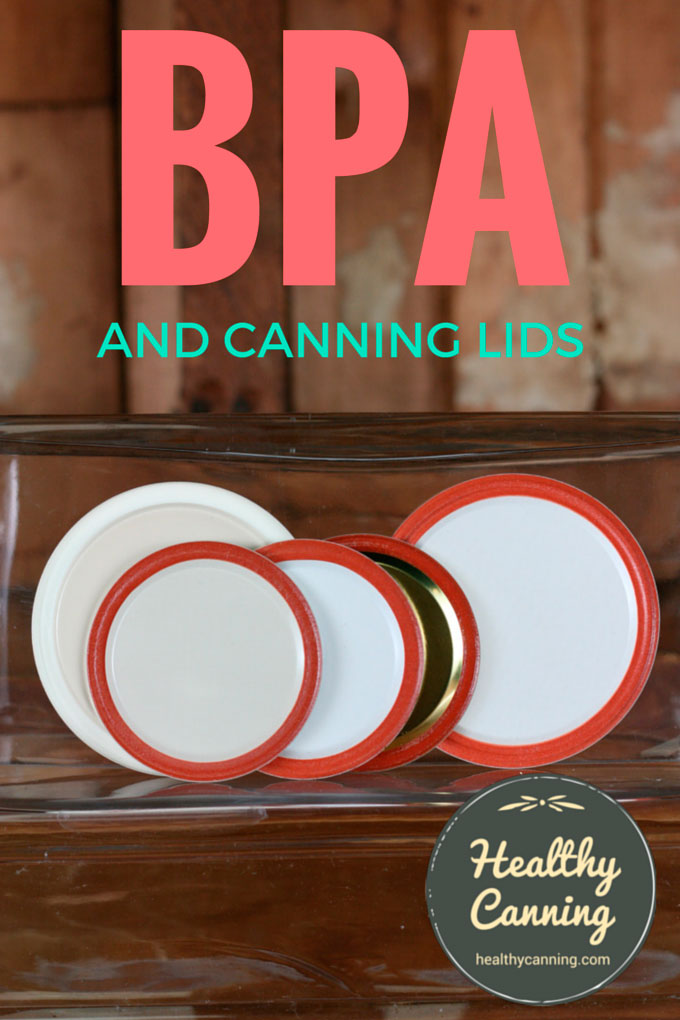 Bisphenol A (BPA) is a compound often used in plastics. For several years, home canners were concerned, rightly or wrongly, about the presence of the compound in the lining on the underside of their canning lids.

To be clear, all Ball and Bernardin branded lids being made as of 2015 and onwards will be BPA free.

Comments from Ball about their BPA free lids

Jarden lids (that’s Ball, Bernardin and Kerr brand lids) have been BPA free since the start of 2013, possibly even at the very end of 2012 when they began rolling out the new BPA-free lids. [Ed: Jarden’s “Golden Harvest” lids don’t have any underside coating.]

Here are some general comments from Jessica Piper, a Jarden rep at the Ball company, in October 2014 about the lid coating change:

That BPA free coating is that cream-coloured coating on your lid, so that was the only thing that changed, the red plastisol ring that goes around, that has been the same since 1969 …. So that was the only change that was made with the BPA free coating.”  [1] Jessica Piper. Video: Canning Lids 101. 30:49. 2 October 2014. Accessed March 2015 at https://ball.yourbrandlive.com/c/lids/.

Just keep in mind that the change was never made to the plastisol, it was simply made to the coating on your lid, so that cream-colour coating is what we updated a few years ago so that has nothing to do with the ability of the lid to seal.”  [3] Jessica Piper. Video: Canning Lids 101. 4:25. Accessed March 2015 at https://ball.yourbrandlive.com/c/lids/.

Another misconception is that because we switched to a BPA free lid, that you only have a shelf life of one year when you process your food. This isn’t anything new, this has actually been a guideline for many, many years, decades actually, that when you preserve your food following a USDA tested recipe that the shelf life is one year for the best quality, flavour and most importantly nutrient value.”  [4] Jessica Piper. Video: Canning Lids 101. 5:07. 2 October 2014. Accessed March 2015 at https://ball.yourbrandlive.com/c/lids/.

How do you tell if your Jarden lids are BPA free?

According to Jarden, if you find any of the following markings on Ball or Kerr lid boxes, your lid is BPA free:  [5] New Changes in Canning Lid Procedures? Accessed March 2015 at https://www.livinghomegrown.com/changes-in-canning-lid-procedures/

According to a blogger who spoke with Bernardin, your Bernardin lids are BPA-free if:  [6] New BPA-free canning lids from Bernardin Canada. 23 May 2013. Accessed May 2015 at https://locaphile.wordpress.com/2013/05/23/new-bpa-free-canning-lids-from-bernardin-canada/

BPA in other brands of canning lids

We received this answer in May 2015 from Killner as to whether the Killner Mason-type preserving jar lids are BPA free or not:

Most of our products do not migrate BPA, but we are still testing the product you mentioned. However, our lids meet the BPA regulation and we hope that the presence of BPA in our products is extremely minimal if there is any at all, but we’d like to conduct more testing on this matter.”  [7] Correspondence on file. Rayware Group on behalf of Kilner. Facebook PM. 6 May 2015.

We received this answer in March 2015 from the owner of Perfit as to whether the Perfit brand of mason jar lids are BPA free or not:

You are only the second person to ask this question me this question in thirty five years. …..  I can’t answer your question as I don’t know however I would guess that there is not. If BPA is a major issue for you to be safe I would suggest that you don’t use them.”  [8] “Don” to Healthycanning.com 28 March 2015. Correspondence on file.

If you would like to know, you will need to ask Perfit directly and press for an answer.

We received this answer in April 2015 from Leifheit customer service as to whether the Leifheit brand of mason jar lids are BPA free or not:

We contacted our supplier and he told us that the inner lacquering is with BPA-NI-lacquers, but it is safe and under the allowed limits. The usage of this lacquers complies with the EU-regulations. During extracting-researches at this lacquers there was no free BPA detected, i.e. the concentration is under the detection limit.”  [9] Correspondence on File. From: Anna-Christina Wahl, Leifheit AG Customer Service. Nassau, Germany. 1 April 2015.

Despite extensive studies by First World health authorities all over the world, there is still no solid evidence or science that BPA poses a danger. And, with respect, there is also no evidence that any amount of evidence would sway the thinking of anyone who has decided that BPA is a danger.

However, we realize and respect that BPA is a concern to some readers, and we take that concern seriously because they are our readers.

Linda Ziedrich is a respected name in the home canning field; she appears to be keeping a wary but open mind on the matter:

Canada identifies BPA as a toxin [Ed: this is not correct] ; the European Food Safety Authority (EFSA) believes BPA safe to use in can and lid linings; and the U.S. Food and Drug Administration hopes that industry will find alternatives to BPA without governmental intervention…. in November 2010 the United Nations Food and Agriculture Organization (FAO) and the World Health Organization (WHO) held a joint meeting of international experts to review the data on the health risks of BPA. In 2011 the background papers presented at that meeting were edited and posted to the WHO website along with a summary report. The conclusions were that BPA probably doesn’t cause cancer, induce genetic mutations, or, generally, accumulate in the body, but that it may possibly have harmful effects on metabolism, children’s (especially girls’) behavior, and sexual development and reproduction. More studies are needed, the scientists said.”  [10] Ziedrich, Linda. Home Canning, BPA-Free. Blog entry 20 January 2012. Accessed March 2015 at https://agardenerstable.com/2012/01/20/home-canning-bpa-free/

FDA’s current perspective, based on its most recent safety assessment, is that BPA is safe at the current levels occurring in foods…..FDA continues to review the available information and studies on BPA. FDA will update its assessment of BPA and will take additional action if warranted. Based on FDA’s ongoing safety review of scientific evidence, the available information continues to support the safety of BPA for the currently approved uses in food containers and packaging…..FDA has participated with Health Canada in encouraging industry efforts to refine their manufacturing methods for the production of infant formula can linings to minimize migration of BPA into the formula.”  [11] USDA. Bisphenol A (BPA): Use in Food Contact Application. November 2014. Accessed March 2015 at https://www.fda.gov/NewsEvents/PublicHealthFocus/ucm064437.htm

In January 2015, [the] European Food Safety Authority (EFSA) published its latest comprehensive re-evaluation of BPA exposure and toxicity. EFSA’s experts concluded that BPA poses no health risk to consumers of any age group (including unborn children, infants and adolescents) at current exposure levels. Although new data and refined methodologies led EFSA’s experts to considerably reduce the safe level of BPA from 50 micrograms per kilogram of body weight per day (µg/kg of bw/day) to 4 µg/kg of bw/day, the highest estimates for dietary exposure and for exposure from a combination of sources (diet, dust, cosmetics and thermal paper) are three to five times lower than the new TDI. Uncertainties surrounding potential health effects of BPA on the mammary gland, reproductive, metabolic, neurobehavioural and immune systems have been quantified and factored in to the calculation of the TDI. In addition, the TDI is temporary pending the outcome of a long-term study in rats, which will help to reduce these uncertainties.”  [12] European Food Safety Authority. Topic: Bisphenol A. 21 January 2015. Accessed March 2015 at https://www.efsa.europa.eu/en/topics/topic/bisphenol.htm

It appears that Jarden felt, and probably still feels, for the record, that BPA poses no danger, but they decided to respond to customer demand and concern and change the channel on the whole issue by making their lids BPA-free before it came to dominate consumers’ conversations with Jarden.  Here’s what they had said back in June 2011:

Jarden Home Brands manufacturer of home canning lids: Ball, Kerr, Golden Harvest, and Bernardin brands follow the same rigorous FDA standards used by the commercial food packaging industry. Like the majority of commercial food packagers using glass jars with metal closures and metal sanitary cans, the coating on our home canning lids is designed to protect the metal from reacting with the food it contains. A small amount of Bisphenol A is present in the coating. The FDA does not limit Bisphenol A in commercially packaged foods, and is aligned with the international scientific community’s position that a small amount of Bisphenol A in contact with ‘canned foods’ is not a health concern for the general public.” [13] Jarden Home Canning FAQ. Accessed June 2011 at https://www.freshpreserving.com/pages/home_canning_faq/42.php

In any event, the whole topic in North America of BPA and home canning may be a dated one now, because if you are buying canning lids made by Jarden, or by Tattler, you are now buying BPA-free lids.

MYTH: Not used in Canada because it’s banned in Canada
FACT: In Canada, BPA is only banned for storage of food for infants.  [14] “Health Canada’s Food Directorate maintains its opinion that the current dietary exposure to BPA through food packaging uses is not expected to pose a health risk to the general population, including newborns and infants … However, due to the uncertainty raised in some animal studies relating to the potential effects of low levels of BPA, the Government of Canada is taking action to enhance the protection of infants and young children. It is therefore recommended that the general principle of ALARA (as low as reasonably achievable) be applied to continue efforts on limiting BPA exposure from food packaging applications to infants and newborns, specifically from pre-packaged infant formula products as a sole source food, for this sensitive segment of the population.” — Health Canada. Bisphenol A. 15 December 2014. https://www.hc-sc.gc.ca/fn-an/securit/packag-emball/bpa/index-eng.php