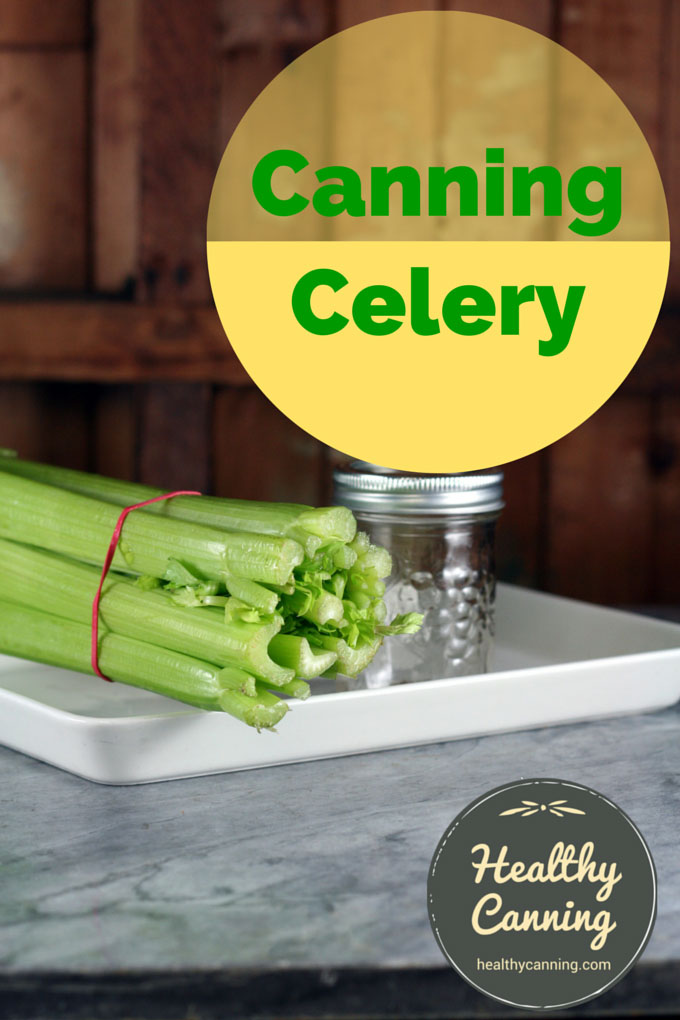 There are no current, approved guidelines for canning plain celery by itself. Consequently, it should not be done. It is not safe to guess at processing times.

To preserve celery, you can freeze it, or dehydrate it.

Canning celery plain by itself

Some people do home pressure-can plain celery. You end up with celery that is of course very soft, but that very fact of course would presumably make it ideal for instant addition to soups, stews, casseroles, risottos, blending for sauces, etc, so it’s easy to understand the appeal of having small jars of it on hand.

However, to reiterate, because no reputable source that does lab-based testing is currently offering safe processing times for jars of plain celery by itself, it should not be done.

Celery as an ingredient in pressure canning

Note that because there is no separate canning time for celery, on paper at least it is not supported as one of the ingredients in the National Center for Home Food Preservation’s soup recipe.

Celery in preserves and condiments

Celery appears as an ingredient in many high-acid food products such as relish, chutney and antipasto recipes. It adds crunch, freshness and depth of flavour.

Though some other vegetable always ends up with naming rights for the recipe (such as “Cucumber Relish”), celery often plays a co-starring (if uncredited) role.

Ball, Bernardin, Canadian Living and the USDA Guide (2015) provide many tested canning recipes calling for celery as an ingredient in such high-acid food products.

If you dry celery, you can afterward turn it into celery powder. You use the powder as you would a spice to add a celery flavour to recipes. 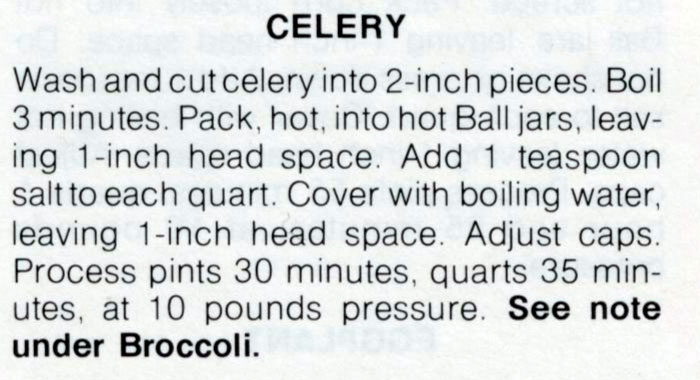 In 1977, the next edition — the 30th — of the Blue Book appeared. The year before, 1976, Ball had established its first ever ‘Fresh Preserving Test Kitchen’ [1]”We’re certainly canning experts — the first official Fresh Preserving Test Kitchen was started in 1976….” Harrold, Judly. Forward. Ball Blue Book, 37th edition, 2014., and, the foreword of that 30th edition notes, “Currently, a major ongoing research project concerning heat penetration is being conducted by a leading university. [ED: possibly  Zottola et al at the  University of Minnesota]” In this 30th edition, canning advice for plain celery was dropped completely.

[ED: To be clear, the above canning information is for historical information purposes only and should not be used for home canning under any circumstances.]

The USDA never backed canning plain celery or had developed directions for it. It was Ball who did. As a private company, Ball couldn’t of course be expected to release any of the research behind its changes in thinking, as the USDA does. But the dropping of celery did coincide with its new test kitchens, and, with the new heat penetration studies conducted, the results of which Ball would have had access to.

So if you see processing times for canning plain celery floating around the Internet, this is where they originated, and they were withdrawn by Ball in 1977.

If you want to know why Ball dropped the celery canning recommendations, you will need to contact them directly and ask.