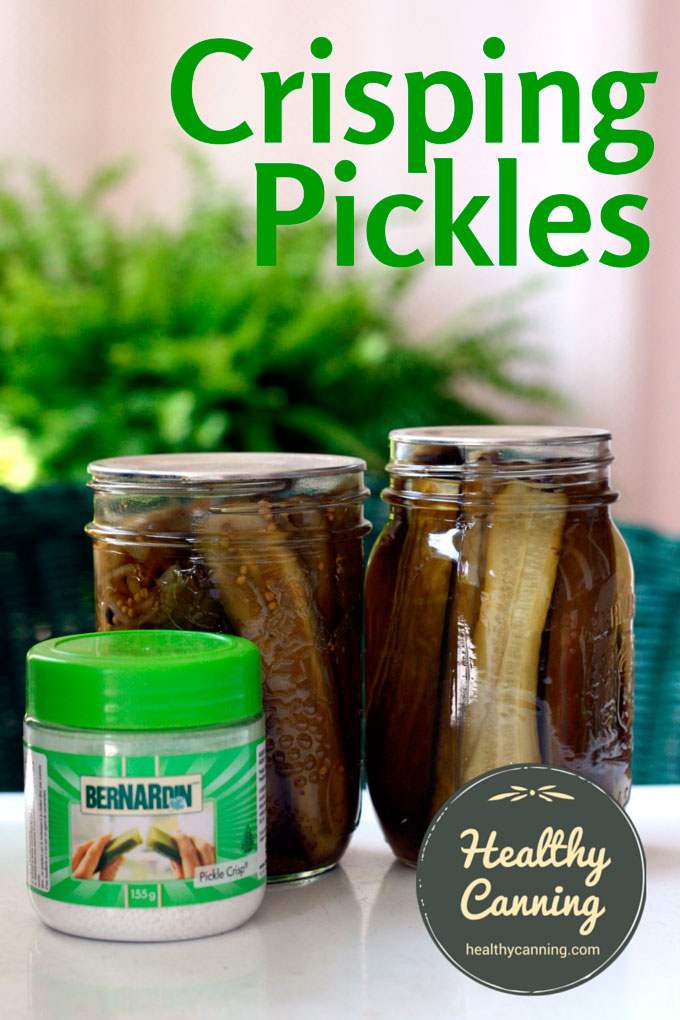 If the vegetable you are thinking of pickling has already gone soft, then there is nothing you can do to recrisp it through any means after which you’d want to still eat it. Nothing short of taxidermy will perk a limp cucumber back up.

The shorter the time between picking and pickling, the crisper your pickle will be. Don’t buy a tray of cucumbers in a supermarket that could be three weeks old since picking and expect to be happy with any pickles you make from it. If you are handed cucumbers of a dubious age, make relish instead with them, or dehydrate them to make cucumber chips.

Don’t attempt to use frozen veg such as cauliflower or beets and expect to be happy with the results you get from pickling them.

That being said, there are many age-old techniques for ensuring that crisp vegetables stay crisp during the pickling process.

It appears though that modern techniques are proving easier, and really are just as good or better.

1. Take a thin slice off the end of cucumbers and zucchinis (aka courgettes)

Barb Ingham at the University of Wisconsin Extension says,

Remove a thin slice (1/16″) from the blossom end of each cucumber prior to pickling. Enzymes which cause softening are concentrated in the blossom end.”  [2] Ingham, Barb. Safe Preserving: Grape Leaves, Alum and Old Wive’s Tales. University of Wisconsin Extension. Blog posting 18 September 2013. Accessed March 2015 at https://fyi.uwex.edu/safepreserving/2013/09/18/safe-preserving-grape-leaves-alum-and-old-wives-tales/.

Most people advise to do this end trimming step, regardless of whatever else you do or don’t do. If you don’t know which end is the blossom end, just do both ends. In fact, many recipes presume people won’t know one end from the other and tell them to crop both ends for that reason.

Most experts now agree that the best way to ensure crisp pickles is simply to make sure they are very cold before starting:

Instead of icing the cucumbers, you could also chill the cucumbers overnight in a refrigerator if there’s room (which there often is with today’s modern large refrigerators), or, in a camping cooler with some ice in it. Leave in until you are ready to use them for the pickles, then wash in very cold water.

Pickle Crisp® is Ball / Bernardin’s brand name for their bottles of pure calcium chloride. Unlike their other pickle mixes, this ingredient is pure and does not contain any added salt, sugar or preservatives. See entry on calcium chloride for more information.

One thing for someone to ponder about the calcium: while some authorities say a completely mineral free water aids in getting a crisp pickle, it’s also possible that water that is high at least in one mineral — calcium — may help. Washington State says, “Water that contains calcium will help produce a firm pickle.”  [5] Crisp Pickles. WSU/Whatcom County Cooperative Extension. Whatcom County Master Food Preserver Program. Accessed March 2015 .   And they may be right, given that calcium is now sold for the express purpose of adding to liquid to crisp pickles. 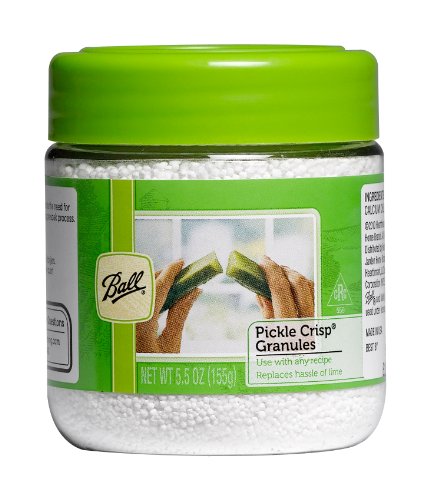 A low temperature processing method for jars of pickles has been developed to help ensure that crisp cucumbers stay crisp. However, they only want you to use it with certain designated recipes. See Low-temperature pasteurization.

Steam canning is newly approved for home canning by the USDA (as of 2015). Some people are reporting that they feel their pickles are crisper when the jars are steam canned instead of water-bathed. They suggest that the reason for this is that the jars are not stewing for half an hour in increasingly-hotter water as the water slowly comes up to boiling so actual processing timing can then start.

However, steam canning is so new that such reports are still few, and in any event, actual testing would be needed to move this beyond anecdotal (other factors could have been at play in their batches of pickles.)

If you use any or all of the modern methods above, you probably don’t need any of the older ways of helping pickles to stay crisp. Today’s home canning authorities all advise that we use the newer methods listed above from a practical point of view: they feel it gives very good results with the least amount of futzing.

Nevertheless, they don’t recommend against the old ways, and still deem the old ways to be safe and acceptable if practised properly.

Here are some old methods in the interest of completeness. 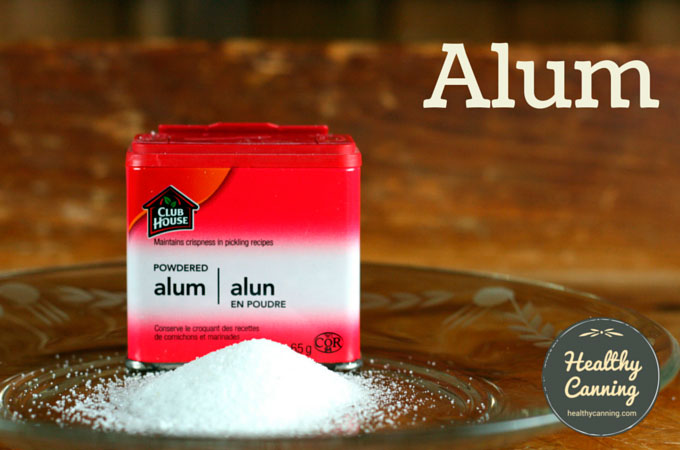 Note that alum is only useful with fermented pickles, which must be made with salt to be safe.

Alum may be safely used to firm fermented pickles. However, it is unnecessary and is not included in the recipes in this publication. Alum does not improve the firmness of quick-process pickles.”  [7] United States Department of Agriculture (USDA). Complete guide to home canning. Agriculture information bulletin No. 539. 2015. Page 1-28.

Alum (aluminum potassium sulfate) has been shown to cause a slight increase in pH and a significant increase in firmness when used at levels up to ¼ teaspoon per pint. Addition of greater than ¼ teaspoon alum per pint decreased the firmness…  Alum is sold in the spice section of grocery stores. Too much alum will give pickles a bitter flavor and may cause digestive upset.  [8] Crisp Pickles. WSU/Whatcom County Cooperative Extension. Whatcom County Master Food Preserver Program.

Barb Ingham at the University of Wisconsin says,

Alum, found in aluminum, also combines with natural pectin to firm texture. While alum has long been used in home pickle making, it can give pickles an objectionable bitter or astringent flavor. While there is no proven link to food, persons with Alzheimer’s disease have higher amounts of aluminum in brain tissue.  For these reasons, alum is  no longer recommended for pickling. If you do choose to use alum, it can be used with fermented cucumbers (genuine or crock dills) only, it does not work with fresh-pack or quick-process pickles.”   [9] Ingham, Barb. Ingham, Barb. Safe Preserving: Grape Leaves, Alum and Old Wive’s Tales. 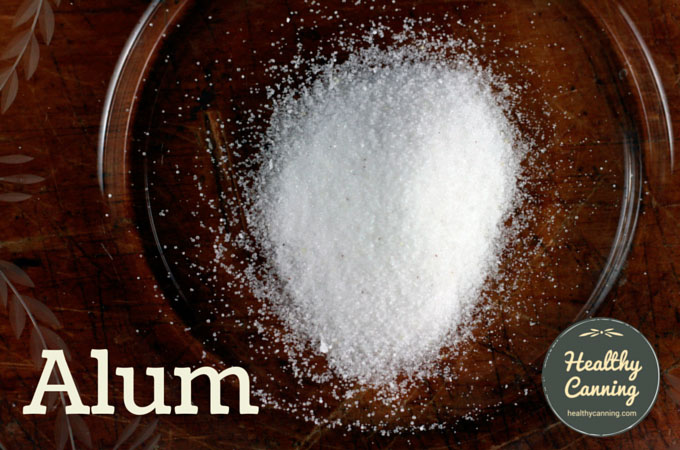 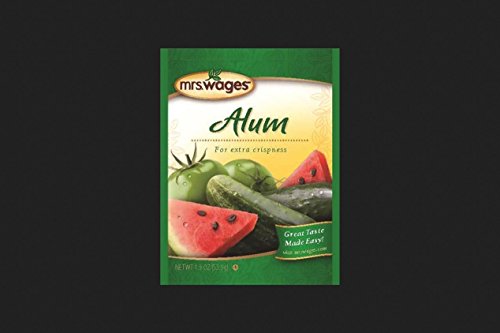 The National Center for Home Food Preservation says that they feel grape leaves have no purpose if you have trimmed the blossom ends off of your cukes and zukes:

Barb Ingham at the University of Wisconsin Extension agrees that if the blossom end of the cuke is trimmed away, grape leaves may serve no purpose:

At some point, people noticed that if they placed grape leaves in the crock or brine during fermentation, cucumbers were less likely to soften. Researchers later discovered that grape leaves contain varying amounts of a natural inhibitor that reduces the effect of a softening enzyme found on moldy cucumber blossoms. If you use fresh cucumbers and remove the blossom, there is no reason to add a grape leaf to your fermentation vessel.”  [12]Ingham, Barb. Safe Preserving: Grape Leaves, Alum and Old Wive’s Tales.

You may still wish to try grape leaves; it’s unnecessary if the above methods are followed and certainly unnecessary if the ends of the cucumbers are cropped off. Grape leaves pose no safety risk, but note that some people say that they detect and don’t like a bitter taste in their pickles that they feel has come from the grape leaves. Other people like the decorative effect of a grape leaf in a jar of pickles.

The Putting Food By authors say,

A happier crisper-upper also mentioned in heirloom recipes is a natural one that, so far as we can discover, is safe to use without restriction. One bygone rule we’ve seen says to cover the bottom of the crock with washed grape leaves and put a layer of them on top of the pickles; and a Southern homemaker says scuppernong leaves are best. Another uses cherry leaves.”  [13] Hertzberg, Ruth; Greene, Janet; Vaughan, Beatrice (2010-05-25). Putting Food By: Fifth Edition (p. 319). Penguin Publishing Group. Kindle Edition.

One of the problems with grape leaves, though, is how do you get grape leaves if you don’t have a grape vine in your back garden. (The best time to harvest fresh grape leaves, apparently, is early to mid-summer.) People seem to head to Greek or Eastern European stores to get bottled or canned leaves packed in brine.

The mineral lime (food-grade quality) aka pickling lime has been used as a pickle crisper, too. It works by providing calcium.

The calcium in lime definitely improves pickle firmness. Food-grade lime may be used as a lime-water solution for soaking fresh cucumbers 12 to 24 hours before pickling them. Excess lime absorbed by the cucumbers must be removed to make safe pickles. To remove excess lime, drain the lime-water solution, rinse, and then resoak the cucumbers in fresh water for 1 hour. Repeat the rinsing and soaking steps two more times.”  [14] United States Department of Agriculture (USDA). Complete guide to home canning. Agriculture information bulletin No. 539. 2015. Page 1-28.

The USDA 2015 guide only draws on pickling lime for three recipes: Bread and Butter Pickles (page 6-9), Quick Sweet Pickles (page 6-12), and Pickled Jalapeno Pepper Rings (page 6-23). For the first two, it’s an option, used for a semi-fermented version of them.

Pickling lime (calcium hydroxide) may be used in a lime-water solution for soaking fresh cucumbers 12-24 hours before pickling with vinegar, sugar, and spices. The lime-water solution must be drained after the soak and the cucumbers then washed at least three times in fresh water to ensure safe pickles. This washing is very important because lime is very alkaline and it is essential to remove the lime to be sure the pickle is safely acidified. Several recipes, which use a lime soak, are included in the USDA food preservation guide…. Lime used in pickling must be food-grade. Several food preservation companies now offer food-grade-pickling lime. Lime sold in lumberyards is industrial grade and may contain contaminants.”  [15] Crisp Pickles. WSU/Whatcom County Cooperative Extension. Whatcom County Master Food Preserver Program. Accessed March 2015.

Pickling lime, or calcium hydroxide, is available in some supermarkets and canning supply stores. Lime provides calcium, which combines with natural pectin in cucumbers to form calcium pectate, giving the pickles a firmer texture. Lime is a highly-basic (non-acidic ingredient). The pH of a saturated solution of calcium hydroxide is 12.4. Soaking cucumbers in a lime solution makes it less likely that added acid (vinegar) is sufficient to ensure a product with a safe pH (4.6 or less). Food grade lime may be safely used only if you follow three rules:

There are 2 approved recipes which offer an option for using lime, Quick Sweet Pickles and Bread-and-Butter Pickles. There are no approved recipes for other pickles which use lime as an ingredient.”  [16] Ingham, Barb. Safe Preserving: Grape Leaves, Alum and Old Wive’s Tales. [Ed: there is actually a third, the pickled jalapenos mentioned above.]

Some old recipes call for leaves high in tannin to be placed at the bottom of a vat of fermenting pickles: leaves such as cherry, horseradish, grape or white oak. The leaves go on the bottom of the vat or are layered amongst the cucumbers. Many people report though they they find the tannic taste of some of the leaves, such as white oak, so strong as to render the pickles unpalatable.

Side note reminder: do not attempt to leave the salt out of any fermented food recipes that call for it. In fermentation, if salt is called for, it’s absolutely required for safety.

Here’s some advice from the Kerr company in 1948 on how to get your pickle crisp: