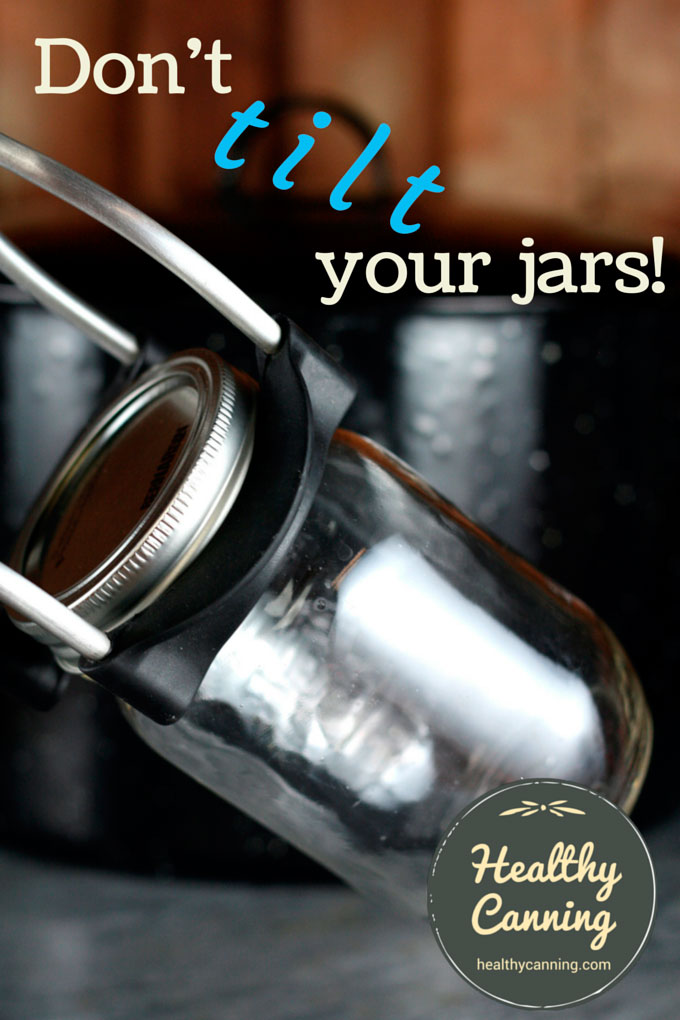 As you are lifting your jars out of the canner after processing, there is often water trapped on top of the lids of the jars, and it is very tempting, even natural, to want to tilt the jars above the canner to drain that water off.

The reason is that you don’t yet necessarily have a permanent seal at this point. Tilting the jar could cause liquid with particles in it to go between the lid and the rim of the jar, preventing a seal from ever happening.

Lift them straight out of the water (if you tilt the jars so the water on top runs off, sloshing liquid might break the vacuum seal or keep it from forming).  [1] Ziedrich, Linda. The Joy of Pickling. Boston, Massachusetts: The Harvard Common Press. 2009. Page 25.

When processing is complete and the canner has cooled as specified, remove jars without tilting. Lift jars straight up and place upright on a padded surface.”  [2]Bernardin Guide to Home Preserving. Toronto, Canada: Bernardin Ltd. 2013, page 11.

So, you’ve got the jars out, on a towel on the counter. What about the water still on the lids?

Don’t worry about water on the tops of the jar lids; it will evaporate during the cooling period. Don’t dry lids or jars at this point. You don’t want to disturb the lids while the seal is being formed.”  [3] Kingry, Judi and Lauren Devine. Bernardin Complete Book of Home Preserving. Toronto, Canada: Robert Rose Inc. 2015. Page 418.

And to be clear, just in case you’re thinking of tilting your jars to lay them on their sides in the canner, or after, on the towel to cool, don’t do that either.

The jars should remain perfectly upright from the time you place them into the canner for processing, to the time 12 to 24 hours later when you are removing the canning rings to check the seal.

This video from the University of Georgia demonstrates the process.