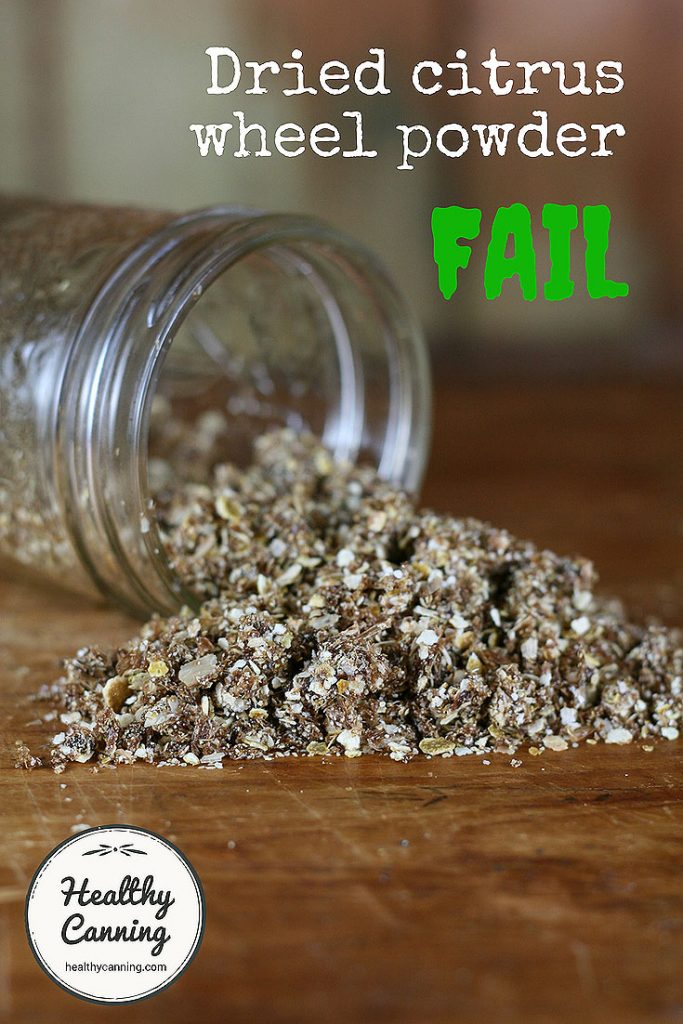 Making it appears to be popular with many bloggers just starting out in dehydrating, as it seems to be a clever shortcut that bypasses more labour intensive standard methods that involve preserving the juice and the peel of the fruits separately (by freezing and drying respectively.)

Despite our misgivings for reasons which have no doubt already struck you, we thought we would try it to see if it actually did work.

We pronounce this a failure, and highly recommend against doing this.

To be clear: the concern is not a safety issue, but rather a quality issue. It is indeed as unpalatable as you probably imagined with us right from the outset.

The first issue is that the pulp never actually truly dries to a state that it could be ground into a powder. The pulp instead dries to a gel-like state, and can just gum up on the blades in your grinder.

The second is that the mixture is going to incorporate all the white pith. As bitter as the white pith is when fresh, it only gets worse because drying concentrates its flavour: “The white pith will become even more bitter when dried and ruins the flavor of the peel.”  [1] Venema, Christine. Drying citrus peel to use later. Michigan State University Extension. 13 January 2017. Accessed January 2018 at https://msue.anr.msu.edu/news/drying_citrus_peel_to_use_later

While many people enjoy a touch of selective bitterness in a drink such as Campari, not everyone would have the tolerance for the concentrated bitterness of dried pith.

Healthy Canning does not usually post blog-style entries, but this attempt seemed to merit one.

We dried the wheels per the directions for drying citrus slices.

These chunks were then batch processed through an electric coffee bean grinder for fine-grinding into the anticipated “powder.” While doing so, we heard the blades constantly hitting hard bits, as you would if you were grinding uncooked dried beans, with a clink-clink sound that should fade away as chunks are pulverised but in fact never quite does fade because they actually aren’t breaking down, and you know that’s not a good sign. After about 30 to 40 seconds, each batch reached a point that it was not going to get more finely “ground.” At the end of all the “grinding”, the tips of these blades were heavily coated with a green gooey molasses that had to be gently pried off with the tip of a knife.

The end result was absolutely not something we would call a powder. It was more like a sticky, clumped rough spongey meal that, when you pressed it down with a finger, would slowly rise back up. It had soft, spongey components mixed with rock-hard pieces of pith, looking like chips of white flint. In your fingers, it felt very much like damp sawdust, with varying degrees of fineness mixed with shards and splinters.

We tasted a teaspoon of the mixture.

At first you do taste lime, though with something odd in the background. Next mostly you notice the bizarre texture, a mix of the soft, spongey component, along with the white pith flint chips, so you’re not quite sure how assertively to chew it — no one wants a chipped filling and a rush trip to the dentist over something like this. Then as your teeth do start cautiously to break up the crunchy white pith bits, their bitterness gets released and starts to really assert itself in taste alongside the lime flavour, making it taste somewhat like what you’ve always imagined that men’s budget drug store lime after-shave cologne would taste like.

After a few more seconds, the bitterness has truly become the dominant taste element, coating your tongue and the top of your mouth, and starting to mask the lime flavour. And it is not a pleasant interesting bitter, either, like the nuanced balanced bitters in Campari, Pimms or Angostura. Just a mealy, bland but invasive bitter — with that hint of cheap aftershave, of course.

While it may be that the bitterness would be less assertive when the “powder” is used as an ingredient in a dish, the unpleasant taste combined with the unpalatable texture, to our thinking, makes it something that would ruin a whole dish.

FAIL. The bloggers who suggest this either have a different set of tastebuds, or, suggested it without actually trying it. The “powder” went into the compost.

On the other hand…..

Some people feel that if the dried slices were a sweeter-tasting citrus fruit, such as oranges, the mixture might taste better.  There could still be, however, a texture issue. Again, though, this is not a safety issue, but rather one of personal preference. You may like the results.