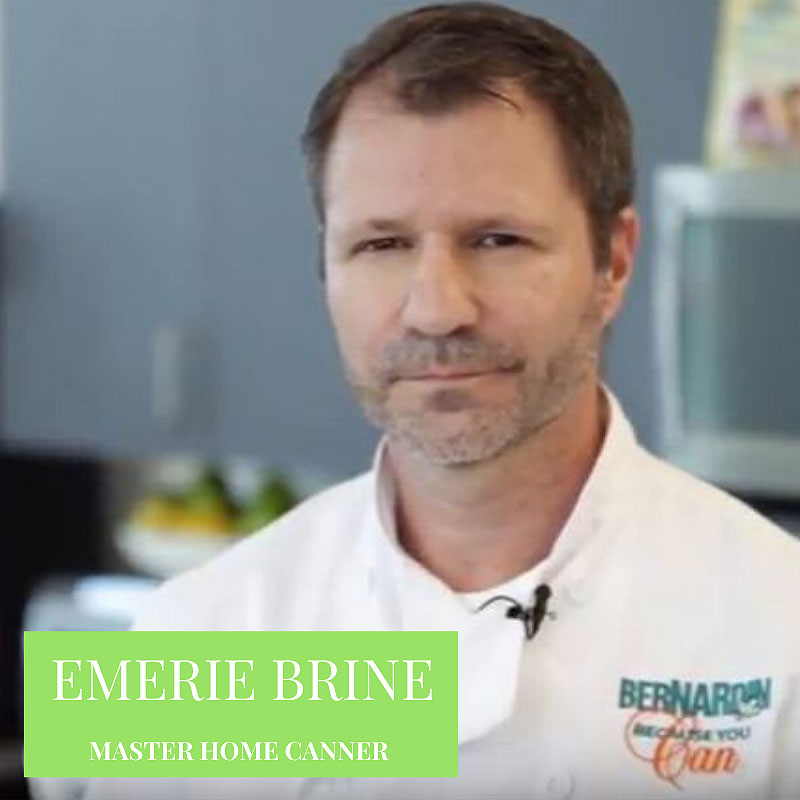 Emerie Brine is a Red Seal Certificate Chef and a Master Food Preserver, and the former Executive Chef and lead home food preserving instructor at Bernardin.

He was the public face of  Bernardin for about 10 years, from 2008 to 2018, being immersed in promoting safe home canning using up-t0-date techniques based on research constantly being done by the Ball / Bernardin companies.

His website, https://www.emeriebrine.com/, explores safe, lab-tested recipes. He is available for teaching and demonstrations of canning.

He hails from a large Acadian, French-speaking family in New Brunswick, Canada, with traditional Acadian specialties such as poutines râpées regularly appearing on the family table.

Brine was a chef in the Royal Canadian Air Force for 3 years, worked for Kraft Foods as a Food Technician and Consumer Relations Associate, and earned his rank as a certified Red Seal Certificate Chef through 3,000 hours of kitchen training and experience.   [1] Foodshare Recipe for Change 2010. Accessed May 2015 at foodshare.net. In 2015, he also completed a Master Food Preserver course at Cornell University.

Brine says canning was in his family and that he has canned since a child:

As a child, my family picked, pickled and canned every possible fruit and vegetable that we grew.”  [2] Foodshare recipe for change 2010. Accessed May 2015 at foodshare.net.

My mother, who’s 75, has been canning ever since she got married at the age of 18 like her mother and grandmother did before her,” says Emerie Brine, consumer relations spokesperson for Bernardin Ltd., a home canning supply company. “We had a large family and lived on a farm, so anything you can imagine was canned. To this day, she cans everything because that’s just what she does.” [3] Wagner, Fiona. Enjoy the fruits of your labour through canning. Bankrate.com. September 2008. Accessed March 2015.

In a May 2011 interview with Fanny Kiefer in Vancouver, he mentions his mother’s pressure canner and that he overcame his fear of pressure canning when he was 20.

Brine says one of his goals is to adjust classic home canning recipes for contemporary tastes: “Now, with the abundance of herbs, spices and vinegars available, we can add some zip to traditional recipes, and create new taste combinations that will become family favourites.”  [4] Foodshare recipe for change 2010. Accessed May 2015 at foodshare.net.