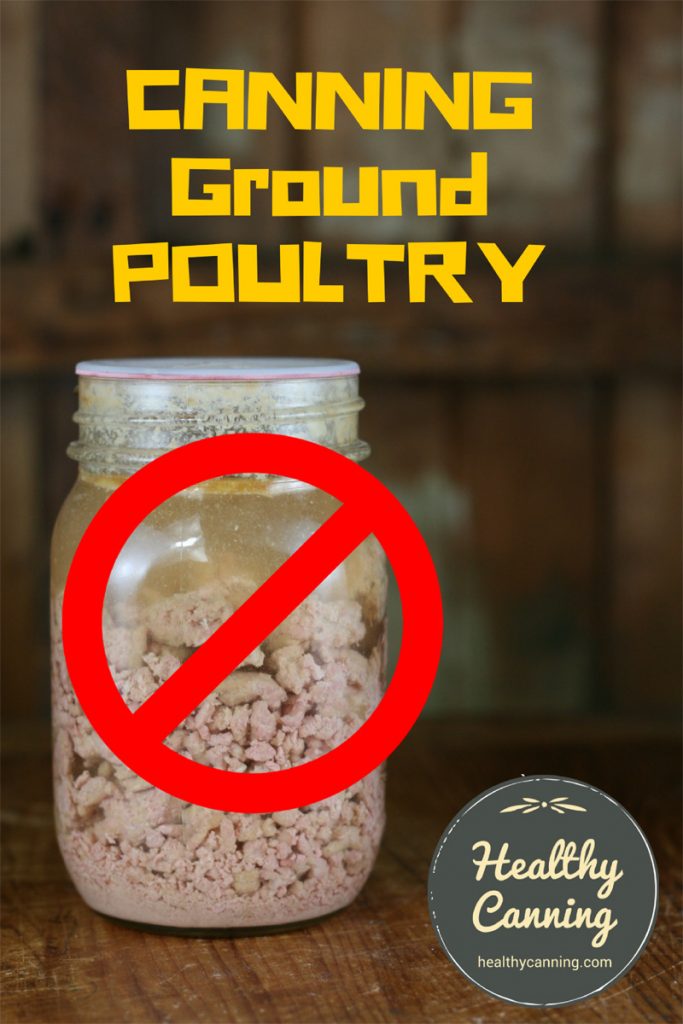 There are no tested recommendations from reputable sources for the home canning of ground poultry (be it chicken, or turkey, or other.)

We also checked with the National Center for Home Food Preservation in January 2017, and, like Penn State, they don’t know either of any USDA home canning research that would support the home canning of ground poultry on its own as a meat pack.

Note that that doesn’t preclude ground poultry’s use as an ingredient in some tested home canning recipes in which its use is specifically supported.

One such example is the USDA spaghetti sauce recipe carried on page 69 of the 2014 edition of “So Easy To Preserve“. There, the authors allow ground turkey as a substitute for the ground beef. [3]Andress, Elizabeth L. and Judy A. Harrison. So Easy to Preserve. University of Georgia Cooperative Extension. Bulletin 989. Sixth Edition. 2014. P. 69.

It will seem odd in this day and age that directions exist for bear and deer meat, which are very difficult to find in supermarkets to say the least, but non-existant for ground chicken and poultry, which are all the rage these days as lean, healthy meats.

But, that’s how it is. The USDA won’t support anything that they haven’t explicitly tested, and while data does exist showing that it is safe to home can ground bear and venison, no research was done on ground poultry because it just wasn’t a thing back when the research was done. It may well be that one day the processing times for ground poultry end up being the same as for other ground meat, or they may end up being more, or less, but the USDA’s Home Canning Division is not in the guessing business. Their business instead is to be able to give home canners “190%” safety and quality guarantees based on research-tested procedures.

If you think they should do a project to develop safe guidelines for home canning ground poultry, many people might agree with you. Write to the National Center to add your vote to such a project, and, write to your political reps to tell them to make sure the National Center gets the funding it needs to undertake such projects for the USDA.

In any event, until such a day as we have tested times for processing ground poultry, freeze it.