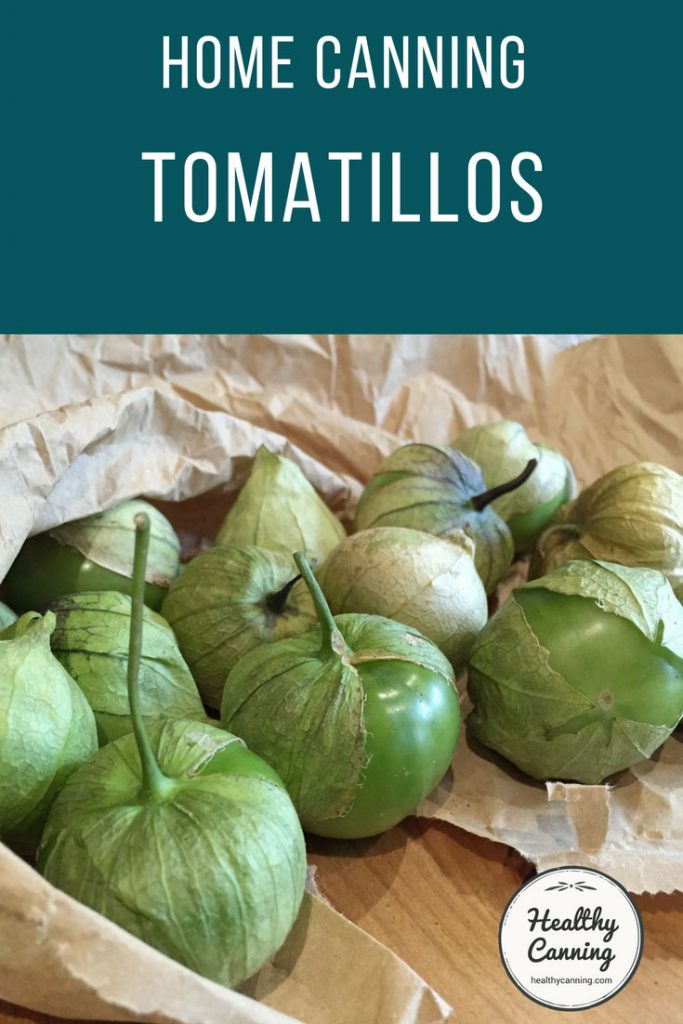 There are several different ways in which you can home can tomatillos.

You may wish to can them as whole plain tomatillos for future use in cooked sauces, etc. Note that there is no raw-pack option: “Because of the firmness of the fruit, it is recommended that the hot pack method be used.” [1]Tomatillos. Oregon State University Extension Service. SP 50-768. March 2003.

You may also wish to use them in condiments such as home-canned salsas or relishes.

The National Home Center for Food Preservation has dedicated a full page to tomatillos, entitled “Preserving a Harvest of Tomatillos.”  (link valid as of July 2016). It’s a must read page if you are interested in the general procedure for canning plain tomatillos on their own, or, to get some ideas for using them in condiments.

The Joy of Cooking teams adds one interesting preparation suggestion for plain canned tomatillos. After peeling off the husk and washing, they suggest that you then “run a clean needle through the fruit to prevent bursting.” [2]Rombauer, Irma S. et al. Joy of Cooking: All about Canning and Preserving. New York: Scribner. 2002. Page 34.

What can you do with the plain canned whole tomatillos?

If you can find only canned tomatillos, an 11-ounce can be substituted for 1 pound of fresh tomatillos in this week’s recipes. The canned variety has already been simmered until softened, and all you have to do is drain them. Cooking by simmering or, preferably, broiling is the first step in all of my tomatillo recipes; skip this step if you’re working with canned.” [3]Shulman, Martha Rose. Cooking With a Mexican Favorite, the Tomatillo. New York: The New York Times. 13 September 2010. Accessed July 2017 at https://www.nytimes.com/2010/09/13/health/nutrition/13recipehealth.html

The Joy of Cooking says,

Canned tomatillos can be served as a condiment with grilled meats and poultry, and are especially good with grilled fish and shellfish.” [4]Rombauer, Irma S. et al. Joy of Cooking: All about Canning and Preserving. Page 33.

Generally, tomatillos should be used before they turn yellow. When they turn yellow, they are over-ripe, and lose their flavour. The exception is the one or two cultivars which are meant to be yellow.

If you are planting tomatillos, you need to plant more than one plant. They are not self-pollinating as tomatoes are.

When canning regular tomatoes, most approved recipes call for tomatoes to be peeled first, and that’s partly for safety reasons, to reduce the bacterial count.

Note though that when canning tomatillos, you do not peel the skin on the tomatillos proper. You do, however, peel off and discard the outer protective husk. (Note: do this only when you go to use them. Leave the husk on when you are storing them before use; it extends their storage life.)

The pH of tomatillos

Tomatillos are even more acidic generally than green tomatoes, but it’s important to note that the USDA still calls for their acidification the same as tomatoes.

The USDA’s table of “Approximate pH of Foods and Food Products” assigns a pH value of 3.83 to tomatillos.  [5] USDA. Center for Food Safety and Applied Nutrition. Acidified and Low-Acid Canned Foods. April 2007. Accessed March 2015 at https://www.foodscience.caes.uga.edu/extension/documents/fdaapproximatephoffoodslacf-phs.pdf.

All jars of plain tomatillos had pH values below 4.1. All combinations of tomatillos/onions and tomatillos/green chile containing more than 50% tomatillo had pH values below the 4.2 cut-off value. Results of the three studies indicate (1) acidification of plain tomatillos is probably unnecessary for canning by the water-bath processing method and (2) combinations of acidic tomatillos and low-acid onions or green chile must contain more than 50% tomatillos to have a pH low enough for safe water-bath processing.”  [6] McKee LH, Remmenga MD, Bock MA. Safety of tomatillos and products containing tomatillos canned by the water-bath canning method. Plant Foods Hum Nutr. 1998;52(2):109-18. Accessed March 2015.

That being noted, the National Center for Home Food Preservation would have been aware of this 1998 research when, in 2009, they issued their recommendations in the USDA Complete Guide about tomatillos, which advice was carried into the 2015 Complete Guide, which is still to acidify them in the same manner and ratio as tomatoes.  [7] Andress, Elizabeth L. and Elaine M. D’Sa. Preserving a Harvest of Tomatillos. National Center for Home Food Preservation. August 2006. Accessed March 2015.

So the official safety recommendation remains to treat them like tomatoes, and acidify them.

We would just add one note, which is that for the acidification of the whole, plain canned tomatillos, you could use bottled lime juice (pH of 2.00 – 2.80) in place of the bottled lemon juice (pH of 2.00 – 2.60) the NCHFP suggests, if you felt that would be better taste-wise in whatever future applications of the canned tomatillos (such as cooked green salsas) you might have in mind. Or, you can use citric acid powder, which should have no effect at all on the taste.

Can you swap tomatillos and green tomato

In terms of general cooking (not canning), a New York Times food writer says, “Tomatillos have a rounder, fruitier and more acidic flavor and a richer texture than regular green tomatoes. I wouldn’t try to substitute one for the other.” [9]Shulman, Martha Rose. Cooking With a Mexican Favorite, the Tomatillo.

What about in terms of home canning recipes? As a general rule, can you use tomatillos instead of green tomatoes? We asked the National Center for Home Food Preservation. They said no.

Whereas the pH of tomatillos might be a substitution for the pH of green tomatoes, that does not mean they make an acceptable substitution for green tomatoes in all recipes for canning from the standpoint of flavor and consistency. The amount of green tomatoes in a certain recipe, for example, may be important to the amount of overall liquid, fibers, pectins and/or sugar in a recipe that interact with other ingredients in different ways. We just are not able to go through all recipes using green tomatoes and figure out what the corresponding transfer to using tomatillos might be. Canning processes do not get determined just by pH; the composition of the ingredients and their interactions also influence processes.” [10]Totally Tomatillos comments section. NCHFP. 26 August 2015. Accessed July 2017 at https://preservingfoodathome.com/2015/07/13/totally-tomatillos/

Note though that some of the Extensions seem to disagree. 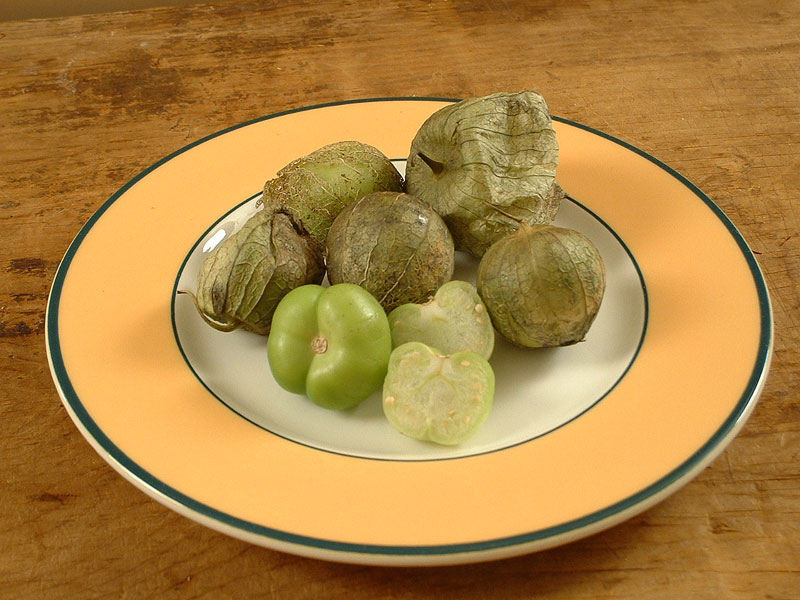 Tomatillos. Showing unhusked, husked, and husked and cut in half