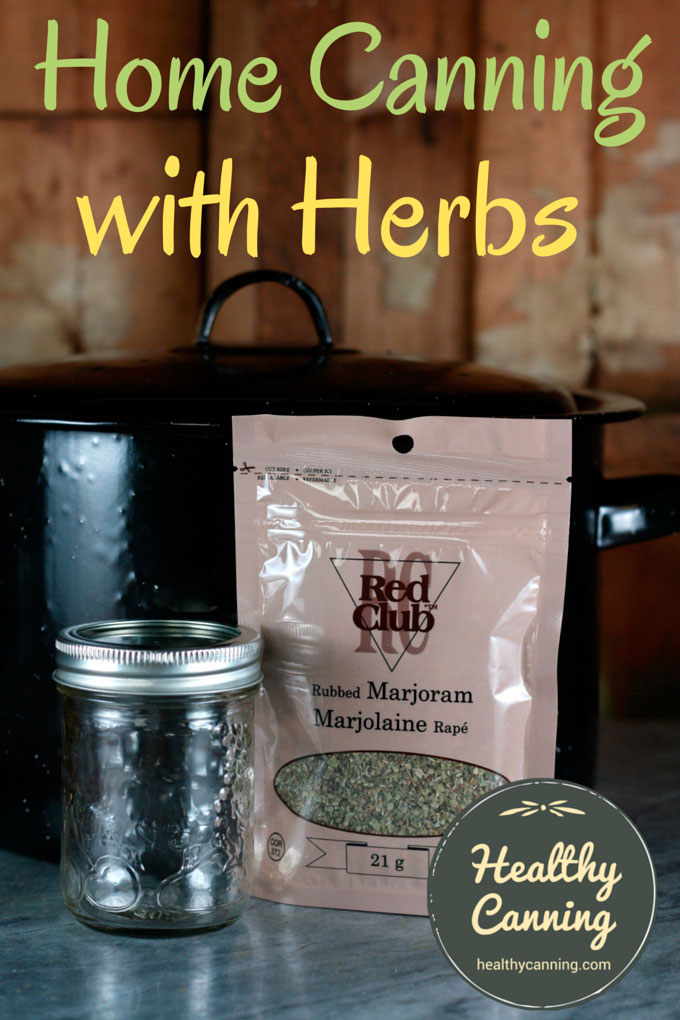 You have some discretion about changing the flavouring of your preserves and canned goods with dried herbs.

While the general rule of thumb is not to change tested canning recipes one bit, changing the flavouring is actually the one thing we can do safely, provided we do so properly.

It’s in those last words that the hesitation occurs — “do so properly.” It’s why most USDA Extension Agents won’t go out of their way to let you know that it’s okay to be creative with dried herbs, and some actually deny that you can. Some say that they have to take that hard line because “if you give people an inch, they will take a mile.” The worry likely is that instead of using a few pinches of dried oregano, someone will use four fistfuls.

As of 2014, Ball started being more open about guiding people how to be creative with herbs in their canning. On 2 October 2014, Ball posted a video about their lids. But in the video, the spokesperson, Jessica Piper, also touched on customizing the flavour of water-bathed, high-acid preserves. She said, “you can always add dry ingredients, like dry red pepper flakes, or maybe cinnamon to apple sauce, or maybe something else to add some flavour, but always use dry, using fresh changes the pH…”  [1] Jessica Piper. Video: Canning Lids 101. 25:34 . Accessed March 2015 at https://ball.yourbrandlive.com/c/lids/.

As of the 37th edition of their Blue Book (dated 2014), Ball started highlighting with balloon tips recipes where you might want to get creative with some dried herbs, such as adding basil to pressure canned corn.

One place where the USDA and Extensions have gotten explicit about adding dried herbs is salsa recipes. The USDA writes about their salsa recipes,

Spices and herbs add unique flavoring to salsas. The amounts of dried spices and herbs in the following recipes (black pepper, salt, dried oregano leaves, and ground cumin) may be altered or left out.  [3] United States Department of Agriculture (USDA). Complete guide to home canning. Agriculture information bulletin No. 539. 2015. Page 3-20.

The amounts of spices and herbs may be altered in these recipes. Cilantro and cumin are often used in spicy salsas. You may leave them out if you prefer a salsa with a milder taste. For a stronger cilantro flavor, add fresh cilantro just before serving the salsa.”  [4] Hillers, Val and Richard Dougherty. Salsa Recipes for Canning. Washington State University Cooperative Extension. Accessed January 2015 at https://extension.usu.edu/utah/files/uploads/Recipes-Cooking-Canning/Salsa%20Recipes%20for%20Canning.pdf. Page 2.

Note that the authorities are saying to avoid playing with fresh herbs in their recipes.

The pH change worry from Ball appears to be that fresh herbs contains water, which can move them from a “flavouring” category to an “ingredient” category — and a low-acid / high pH ingredient at that, which if used in sufficient quantities, could adversely affect the pH balance of your preserve by diluting the acidity and raising it close to or above 4.6.

Leaving aside one’s natural incredulity about how much water could be in 4 tablespoons of chopped fresh parsley to affect the pH of a relish or salsa, it raises the question of why more fresh herbs aren’t used in food products being pressure canned at home, where acidity levels are not a concern. There could be other concerns, such as the microbial load on fresh herbs which varies wildly, making it hard to develop a rule of thumb that would apply in all cases.  [5] Andress, Elizabeth et al. Microbiota of fresh herbs and whole spices used in home food preservation and effectiveness of microbial intervention methods. PowerPoint Presentation. 2001. Accessed June 2015 at https://nchfp.uga.edu/papers/2001/Microbiota-poster.ppt [Ed: Note though that even dried herbs can contain nasties, and even something like garlic powder can contain salmonella  [6] Health Canada. Various products containing garlic powder recalled due to Salmonella. 17 March 2015. Accessed March 2015 at http://www.inspection.gc.ca/about-the-cfia/newsroom/food-recall-warnings/complete-listing/2015-03-17/eng/1426644706393/1426644710345. so proper in-jar processing procedures of the food product being canned are assumed.]

There are, however, exceptions to the “no fresh herbs” rule. That exception is the usual one: when you are using a tested recipe from a reputable source which actually calls for them.

In her recipes in The Joy of Pickling, Linda Ziedrich is a big believer in using fresh herbs, even suggesting that it’s worth trying to grow some dill yourself, staggering the planting every few weeks until midsummer so that you have a constant supply as it matures. She says that dill seeds “taste fresh and mild” before they dry out. If a recipe calls for a fresh dill umbel and you don’t have one, use one teaspoon of dried dill seed instead  [7]Ziedrich, Linda. The Joy of Pickling. Boston, Massachusetts: The Harvard Common Press. 2009. Page 14. . She’s also a big believer in the taste that fresh ginger slices can add.

If you’re a foodie or a gourmet reading about herbs in home canning for the first time, this revelation about dried being preferred over fresh will surely shock you, but, regardless, this is how it is: you are supposed to use dried herbs instead of fresh herbs. You can only use fresh herbs if a tested recipe calls for them.

It’s hard to fathom intellectually what harm a small sprig of fresh oregano could do in a jar of lima beans that is being pressure canned… but until there are precedents for it, or it’s approved with guidelines, it would appear we can’t do it with fresh, only with dried, unless a tested recipe gives us the go-ahead.

Flavour your canned goods with dried herbs instead of salt

Experimenting with dried herbs in your home canned goods can be a good way to make them more appealing, while weaning yourself off the too-often-seen home canning suggestion of “back the dump truck up and slide the salt in.” The University of Alaska says, “For those who wish to reduce their salt intake or add variety to their home-canned fish, try one of the [herb] suggestions …”  [12] van Delden, Kari. Add Variety to Home-Canned Fish . University of Alaska Fairbanks Cooperative Extension Service. FNH-00224 . Revised April 2012.

To start though, use dried herbs sparingly per jar. ¼ teaspoon might seem like so little that it’s a waste of time, but as the University of Alaska goes on to caution, “Herbs and spices may intensify in flavor with long canning times.” So, use sparingly at first. In subsequent canning runs, you can crank up the amounts if desired after you see what a moderate amount comes out tasting like. ¼ teaspoon per ½ litre (1 US pint) jar is in fact a good rule of thumb, until you know otherwise.

Use rubbed as opposed to powdered

And, finally, you usually want rubbed dried herbs as opposed to powdered dried herbs, if only because powdered can make your jar murkier than would be appealing.