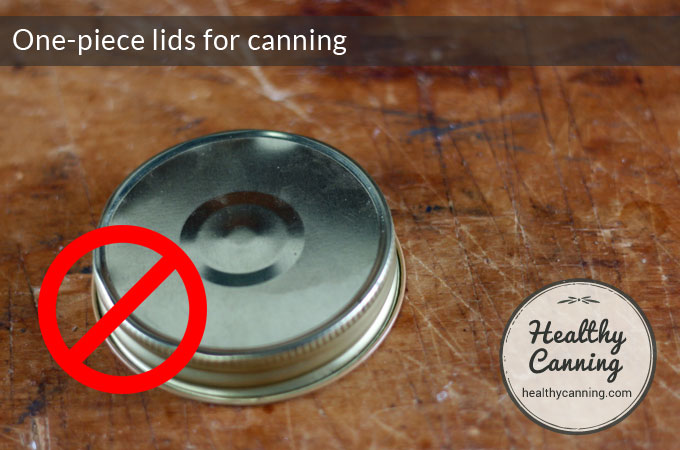 There are one-piece canning lids (aka “Twist-top lids”), such as you see on commercially-purchased bottled goods, that are sold for home canning use.

You put them on jars and process the jars. According to the manufacturers, if a dimple (sometimes called a “safety” button) in the middle gets sucked downwards afterwards, that is how you know they sealed.  [1] McClellan, Marisa. Canning 101: How to Use One Piece Lids. Blog post. 9 October 2012. Accessed March 2015.

You will see these types of lids sold with many European and British preserving jars. Some people say that in the parts of the world they live in, they can only buy one-piece lids and have no other option.

But in North America, they are specifically recommended against for home canning.

The University of Minnesota says,

(Q:) Can I use one piece canning lids for home canning? (A:) No. One piece screw type canning lids are not designed or approved for home canning use. This type of lid is used in food processing as a hot-fill-hold process under very strict time and temperature controls. In home-canning a two-piece lid is needed to let the air escape during the boiling water or pressure canning process. A one-piece lid doesn’t allow the air to escape resulting in blowing out the bottom of the jar or the lid to buckle.  [2]Driessen, Suzanne. Food Preservation FAQs. University of Minnesota Extension. 2014. Accessed June 2015 at https://www.extension.umn.edu/food/food-safety/preserving/general/food-preservation-faqs/.

In the interest of balance, and deeper understanding, it’s important also to take notice of this explicatory note in So Easy to Preserve (whose authors assist with the USDA Complete Guide):

Some of these jars have one-piece or other types of lid systems that may or may not offer the same type of air venting and sealing success as the two-piece metal lid system….. As long as the proper jar type, size and shape is used with properly researched canning procedures, the lid choice itself (e.g. two-piece metal, plastic or one-piece metal lids) does not affect the microbiological safety of the canning process. The issues become ease of use, success in sealing and maintenance of vacuum and food quality during storage.” [3]Andress, Elizabeth L. and Judy A. Harrison. So Easy to Preserve. University of Georgia Cooperative Extension. Bulletin 989. Sixth Edition. 2014. Page 24.

Popular one-piece lids include those made by Quattro Stagioni.

Many people re-use the one-piece lids and in fact they are often sold as re-usable.

Some one-piece lids are made with “buttons” embossed in the centre, which are meant to be visually “depressed” when there is a vacuum present. Healthy Canning has found though that just how “depressed” counts as “depressed” appears to be open to interpretation by various people, especially if a vacuum is weak.

Healthy Canning does note that in Australia and New Zealand, many people who otherwise try to follow modern canning recommendations from reputable sources do none-the-less often find themselves compelled for economic reasons to consider using one-piece lids, simply owing to the often prohibitive prices of two-piece lid systems in those countries.

In any event, the recommendation against is not based on a microbiological safety issue per se, but rather on operational issues:

In any event, as we noted, the recommendation at the present time (2017) in North America is against using one-piece lids for the operational reasons listed above. The National Center for Home Food Preservation (which coordinates home canning research on behalf of the USDA) has simply not had the funding yet to study the issue enough to be able to recommend it positively at the present time. They aren’t allowed to “guess”, and when they make a recommendation, it has to be good for hundreds of millions of not-always careful users, not just one careful household, and the last thing they would want is a flood of complaints from people who had seals fail on the shelf and food spoil.

NOTE: Healthy Canning also notes that even commercially-purchased jars of food with one-piece lids sometimes are not actually sealed. We would advise consumers not to take a safe seal for granted on any jars, even store-bought ones, and to take a second to examine the jar lid first before opening.

One piece canning lids used to be made under the Kerr name a long time ago. In 1976, a firm called Klik-It Corp. in Chicago began selling one piece Mason caps called “Klik-It” lids, but they don’t seem to have survived in business.  [4] Brookshire, Paula. New Lids Here to Stay? Milwaukee, Wisconsin: The Milwaukee Journal. Wednesday, 12 May 1976. Page 5.