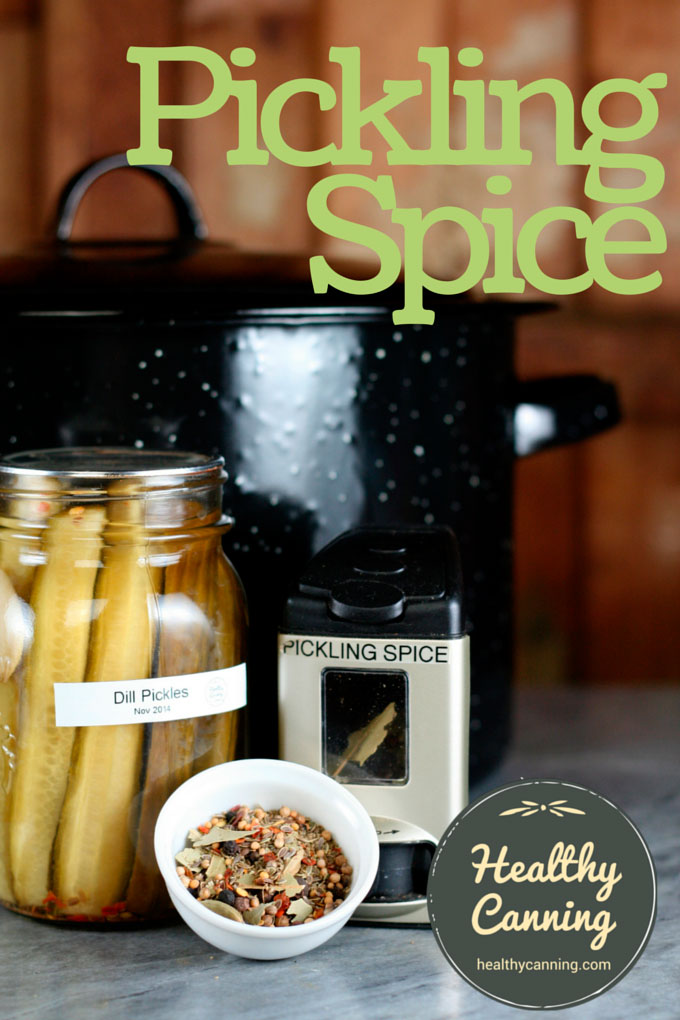 Pickling spice is a spice mixture that can be used to add flavouring and aromatics to savoury preserves, pickles and relishes.

You can buy pickling spice mix pre-mixed in jars or packages, or, make up your own.

Pickling spice has no impact whatsoever upon the safety or quality of the food product you are using it in; it is purely a taste element. Often, you use it only during the preparation phase to flavour the pickling liquid and discard it before you begin the canning process. Sometimes, though, a recipe may call for it to the added to the jars.

Pickling spice is used in small amounts at a time, with each amount being single-use only (as all the flavour will have come out) and being disposed of afterwards in compost, etc.

When measuring pickling spice, give the mixture a shake first, because otherwise the smaller items in it such as seeds will have fallen to the bottom and you won’t get an even distribution of flavour elements in what you have measured out.

When using it, you usually need to put it in some sort of mesh device which allows the flavour to flow out, while keeping all the little pieces together for easy discarding later. Typically, the “device” is a small bundle of cheesecloth held together with string or a rubber band. Tea genies that won’t react with vinegar, or plastic mesh devices such as a baby feeder, can also be pressed into service to hold the pickling spice mix if experimentation proves them useful in your eyes in this regard.

The spices used in a pickling mix will be in a “whole” form (such as mustard seed) or broken into pieces (such as cinnamon sticks and bay leaves), but not ground, because ground versions of these spices would cloud pickle recipes.

The tastes of some pickling mixes can be more American / British; others can be more Scandinavian with a heavier emphasis on cardamom, cinnamon and caraway, etc.   [1] Scandinavians had trade links to the Byzantine Empire during the Middle Ages and so had access to somewhat more spices than the rest of Europe had.

You may prefer the taste of a pickling spice mix you have always bought: if so, you should keep on buying it. But you may wish out of curiosity sometime to try your hand at homemade, or, you may find sometime you have run out when you are in the middle of something and don’t have time to go to the store. Some stores let themselves run out of stock on it out of season.

There are loads of recipes for suggested pickling spice mixes on the Internet. We’ve also provided one here (sample picking spice recipe ) that is middle of the road in terms of taste; not too heavy in any particular spicing direction.