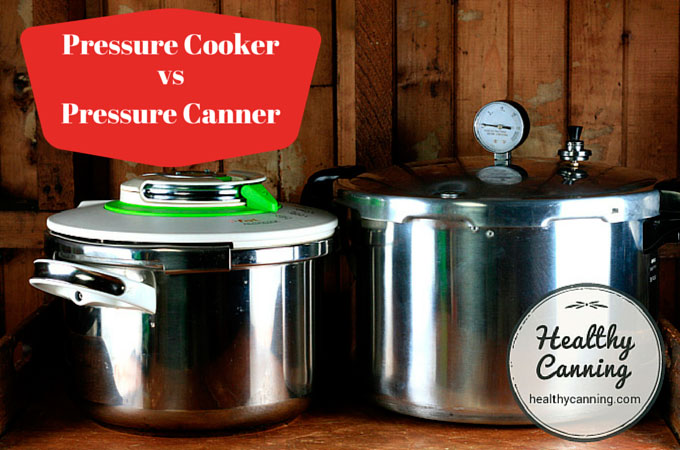 Pressure canners are not the same thing as pressure cookers, and it is important to understand the difference. Pressure cookers or pressure saucepans are used to rapidly cook meats, vegetables and other foods for a family meal. But they may not maintain adequate pressure, and they heat and cool too quickly to use them to safely pressure can foods.”  [1] Pressure Canners: Not the Same as Pressure Cookers. University of Wisconsin Extension. Accessed March 2015 at https://www.foodsafety.wisc.edu/consumer/fact_sheets/pressurecannerandcooker.pdf

Two things distinguish pressure canners as a group from other pressure cookers:

1. Their size. Pressure canners are bigger than regular pressure cookers;
2. Endorsement. They are recommended by authorities in the field as safe to be used for pressure canning as well as cooking.

(Some people would add a third condition: ability to precisely control and know the exact pressure, rather than a vague “high”, “medium” or “low.”)

The main issue with canning in regular pressure cookers is that none of the authorities — the USDA, Jarden Corporation, National Center for Home Food Preservation, etc — have developed recommended, guaranteed safe processes and times for canning in small pressure cookers.

Part of the reason is that there are hundreds if not thousands of variations of pressure cookers out there in people’s cupboards, counting all the decades of various evolution and changes that each make and model went through. It’s not humanly possible for them to come up with safe recommendations custom to each possible variation. So they have to come up with broad, simple recommendations that will work — and work safely 190% of the time — for everyone.

In order to do that, they established a minimum size of pot that testing starts from, and that minimum size took into account sensible things such as ability to accommodate certain jar sizes and shapes, as well as what’s the minimum sensible amount a person is going to want to pressure can. (Which is to say, there may be the odd person that wants to go through the whole pressure canning procedure for just one jar of something, in a small pot, but sadly for that person, that experience just wouldn’t be representative enough of what enough people are going to want to do, and so limited research dollars weren’t spent on testing times for small 1 jar pots.)

There are a few small canners on the market in 2015 that are in the minimum capacity of  4 x 1 US quart jars range. See the page on pressure canner brands. Curiously, the manufacturer All American appears to have reservations about its small model, the All American Pressure Canner 910 10 Quart, perhaps related to the small size, and warns “The All American Pressure Canner 910 10 Quart is not recommended for canning fish.” [2] Accessed March 2015 at https://www.allamericancanner.com/allamerican910pressurecanner.htm

Pressure cookers smaller than the cut off point have the following issues:

These factors do make a difference — they cause the smaller pressure cooker to heat up faster, and cool down faster.

Heating up faster and cooling down faster might seem like bonus points in a cooks mind, but why that’s a problem is… take for example the processing time of 25 minutes for a US pint (½ litre) jar of carrots. They might have actually said longer based on pure active processing time, but to be fuel and time efficient they found that they could take into account as well heat times as the start and end of the process. That enabled them to call for shorter process times in many instances. If the small size of your pot causes time to be lost at the start and end of the procedure, then actual new, longer process times need to be developed to ensure total kill of nasties inside the jars. How much longer? Who knows, depends on the thickness of the metal, height and width of the pot, how much water is in there, etc. All of which affect the patterns of heat distribution, and the heat distribution in any given pot also varies based on the make up on the food in the jars! So many variables and permutations!

In the 1940s, USDA agents made the mistaken assumption, in a misguided effort to help people possibly owing to war shortages of proper canners, that adding an extra 10 (or 20) minutes when canning in regular pressure cookers would do the trick and make jars of food safe.

So the processes can’t just be converted to smaller size pots by simply adjusting time.

Some research and testing was done later, but not to the point of their being able to reach absolute, 110% safe conclusions either.

The “authorities” are not trying to be mean; and they are genuinely curious to know if safe processes could be created for those small size pots. Dr Elizabeth Andress, project director of the National Center for Home Food Preservation, has said that she wishes there were the time, the resources to know… In a 2013 webinar, she said: “I would still like to get back to — how different would process times be in a small cooker vs a canner.”  [4] Andress, Elizabeth. “History, Science and Current Practice in Home Food Preservation.” Webinar. 27 February 2013. At 27:43. Accessed January 2015 at https://nchfp.uga.edu/multimedia/video/nchfp.wmv

It may end up being, 100 years from now, that they know that the smaller models of pressure cookers that we had access to today could never have been made safe to can in, in their current configurations.

Note: electric pressure cookers, even if they make claims about being compatible for pressure canning, are specifically recommended against  [5]Christian, Kasey. Can I Can in a Multi-Cooker? Preserving Food at Home blog. 25 November 2014. Accessed March 2015 at https://preservingfoodathome.com/2014/11/25/can-i-can-in-a-multi-cooker/ .

“You cannot can low acid foods safely in a pressure cooker, because it is not capable of achieving enough pressure to reach the required safety temperature of 240 degrees Fahrenheit. Attempting to do so is another version of the botulism canning mistake. Don’t do it.”  [6] Plemmons, Skip (2014-09-14). Next Generation Home Canning: Contemporary and Fun Recipes for Beginners .  . Kindle Edition.

Note that old home canning guides often used the two terms interchangeably, cooker and canner, but if you look at the illustrations, they were absolutely referring to what we would call canners. 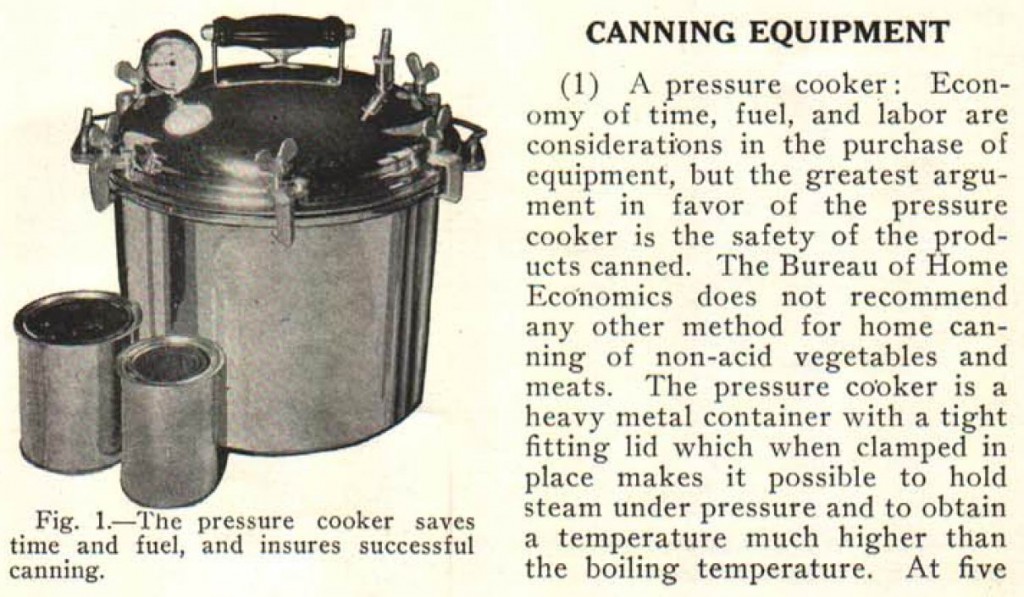 Here is a survey of the confusion the research was in back in 1983: Canner Construction and Size. In: Andress, Elizabeth L and Gerald Kuhn. Critical Review of Home Preservation Literature and Current Research. Athens, GA: University of Georgia, Cooperative Extension Service. 1983. Chapter IV. EQUIPMENT AND ITS MANAGEMENT – HISTORY AND CURRENT ISSUES. Available online as of March 2015.

Pressure cookers: not the same as pressure canners. University of Wisconsin.