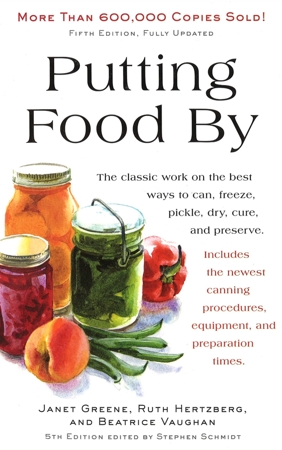 Owing to our mandate to adhere strictly to USDA-based guidelines, we haven’t placed it on our core recommended list of sources.

Consequently, we have recorded this collection of observations about the book.

To be clear, the writers certainly have a great deal of knowledge, and we do cite them from time to time on this web site. And, in all humility, they may have forgotten more about home canning than we’ll ever know. But again, owing to our mandate, we just can’t put the book on the core recommended list. While “long in the tooth” safe canners may have the knowledge to discern exactly what “for the most part” means, most home canners never will.

Get the most recent edition

There have been several editions of it starting in 1973. If you are using this book, make sure that you are working from a 2010 or later edition, as they changed a lot of their recommendations for safety reasons in 2010 to catch up with the USDA on some things.

Don’t use old copies you find in rummage sales, and stop using any old editions you might have at home.

Who do they use as their source?

The authors seem to consult a good deal with USDA people, and cite the USDA as a source a great deal. But, they also refer to a possibly higher source even. If there’s one thing the USDA respects, it’s the scientific knowledge in the commercial canning industry, and PFB draws on that as a source:

Note: the processing times for food in glass mason jars using both Boiling–Water Bath and Pressure Canning given in this edition of PFB are based on recommendations by the USDA’s Complete Guide to Home Canning (2006). The processing times for home canning in metal containers are from bulletins of National Food Processors Association, which is now called Food Products Association.”  [1] Hertzberg, Ruth; Greene, Janet; Vaughan, Beatrice (2010-05-25). Putting Food By: Fifth Edition (p. 44). Penguin Publishing Group. Kindle Edition.

Questions about Putting Food By

The questions below may just pose themselves because the authors of PFB may have access to more in-depth information that hasn’t been released to us hoi polloi general public yet.

1. Putting Food By allows the occasional use of pressure cookers instead of canners

The USDA blanket disallows any use of a pressure cooker not also “certified” as being pressure canner class.

The Putting Food By authors prefer you to use a “certified” pressure canner, but give directions for a pressure cooker. They write:

Of course, one’s instant reaction as a “safe canner” is shock and horror – they are admitting that some people might use smaller pressure cookers than larger, proper pressure canners, and they are giving them guidance. But there is also now a health and safety concept in population health known as “harm reduction”: acknowledging that some people are going to do less than optimal behaviour health-wise regardless of how often they are told not to, and consequently giving advice to lessen the damage. Perhaps the authors of PFT are engaging in harm-reduction, so you can debate the pros and cons of them addressing such a topic in such a way.

They give directions for wire clamp and bail glass lids jars, which the USDA flat out says “don’t even think about it.” (pages 66 – 67). Again, perhaps in the category of “harm reduction?”

3. Give pressure canning process times where the USDA  / Ball provide none

The USDA has no recommendations for these, and pro-actively recommends against canning plain eggplant.

Ball used to offer celery and eggplant processing directions identical to PFB, but Ball withdrew those in the second half of the 1970s.

Healthy Canning is not aware of Ball ever offering support for pressure canning Jerusalem Artichokes, so it’s uncertain where the process development for that may have come from.

This is more a curiosity note. PFB calls for vinegar to be added to pressure-canned peppers to make them safe: “Acid is added to green peppers in order to can them safely.” (Page 148). To be fair, Ball and Bernardin call for vinegar, too, but don’t say why. The USDA directions do not require acidification for pressure canned peppers. “Add ½ teaspoon of salt to each pint jar, if desired. Fill hot jars loosely with peppers and add fresh boiling water, leaving 1-inch headspace. Remove air bubbles and adjust headspace if needed. Wipe rims of jars with a dampened clean paper towel. Adjust lids and process.” [3] USDA Complete Guide 2015. Page 4-15

It would be interesting to learn where and when the idea of adding a bit of vinegar to pressure canned peppers emerged, and why Ball / Bernardin / Putting Food By adhere to it, while the USDA does not.

Putting Food By gives directions for pie fillings with tapioca, which will shock safe canners, who have had it drilled into them that the only authorized thickener is Clearjel. Putting Food By, though, covers itself neatly: they note that these directions are originally from Nebraska University Cooperative Extension Service. “Following are well-tested pie fillings: the first two are good friends and fine performers from CES-Nebraska . Tapioca as the firming agent is more stable than cornstarch, which formerly was used here.” (page 195). However, those thickener directions no longer appear to be part of Nebraska’s current recommendations, as of June 2015:  https://food.unl.edu/preservation/fruits .

Putting Food By refers to the now-discredited inversion method (flipping jars upside down after taking them out of the canner) as “newish”, dating from 1987 and introduced by General Mills. But, in fact, the inversion method existed from the start of the 1900s practically and Kerr was already warning against it in 1947 (see Inversion Canning). But this obviously is a very minor quibble.

The USDA ceased providing recommendations for home canning in tin cans in 1988. Putting Food by continues to provide them, as does the University of Alaska Extension Service. This is not to say their recommendations for this are valid or invalid; it’s just an observation. 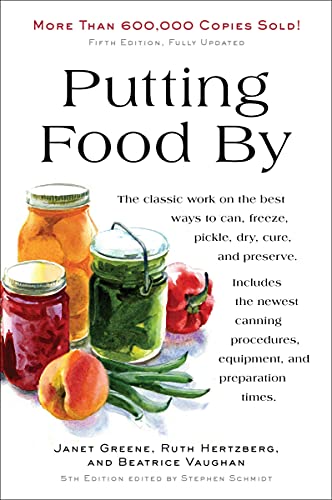 Who endorses the book

Rutgers New Jersey Agricultual Experiment Station lists Putting Food By as a “How to” Recipe book, beside the Blue Book, So Easy to Preserve, and the USDA Complete Guide. [5]Minch, Daryl. Preserve the Harvest. Family and Community Health Sciences. Visions. Volume 25, # 2. 2013. Page 8