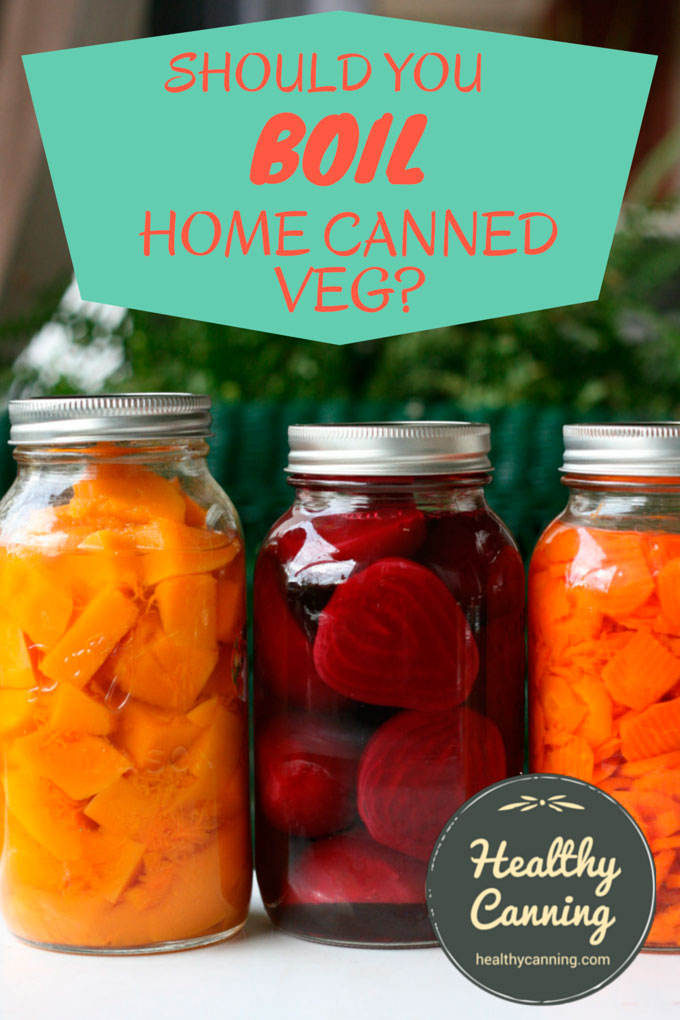 If you have done your canning according to USDA standards, the answer is: no, you do not need to boil your home canned food upon opening it.

The very thought of boiling vegetables that have already been pressure canned for up to 90 minutes would surely have nutritionists tearing their hair out and asking, “What, you mean just in case there were any nutrients at all left after the pressure canning process?”

If you’re in a hurry, just skip the summary conclusion at the bottom of the page.

In the meantime, here’s the story.

The temperature of boiling water (100 C / 212 F) is not hot enough to kill botulism spores, but it is hot enough to destroy the toxin (which is what kills you) that they produce.

Boiling food with botulism toxin in it can make the food safe (or safer) to eat.

There’s therefore two questions to be asked in addressing this question of whether to boil home canned vegetables:

When is it necessary to boil home canned vegetables?

The USDA, which is the overriding authority, says that if you aren’t certain their canning procedures were followed, then boil   [1] United States Department of Agriculture (USDA). 2015. Complete guide to home canning. Agriculture information bulletin No. 539. Available at:  (Accessed March 2015). Page III:

If it is possible that any deviation from the USDA-endorsed methods occurred, to prevent the risk of botulism, low-acid and tomato foods should be boiled in a saucepan before consuming even if you detect no signs of spoilage. At altitudes below 1,000 ft [Ed: 300 metres], boil foods for 10 minutes. Add an additional minute of boiling time for each additional 1,000 ft [300 metres] elevation. However, this is not intended to serve as a recommendation for consuming foods known to be significantly underprocessed according to current standards and recommended methods. It is not a guarantee that all possible defects and hazards with non-recommended methods can be overcome by this boiling process.”

Note that they go on to say that if you are confident their procedures were followed to the letter, then they explicitly say you do not need to boil:  [2]Ibid., Page III

All low-acid foods canned according to the approved recommendations may be eaten without boiling them when you are sure of all the following:

Elizabeth Andress, head of The National Center for Home Food Preservation says if you know that the food products were canned correctly, then boiling the product is not necessary:

We used to tell people to boil home canned vegetables before eating. Starting with the USDA Complete guide in 1988, the statement was made, ‘If you follow these directions you should not have to do that.’ Please read the statement on the inside front cover of the 2015 Complete Guide to Home Canning, where we’ve added language to say, this boiling isn’t meant to even cover gross underprocessing situations, but if you have any concern at all, I would boil low-acid foods for at least 10 minutes before eating them. But theoretically it is not necessary if you follow all the steps correctly. But I know some states continue to recommend this, it’s kind of a comfort level thing, how much risk are you willing to withstand if you are the one making the recommendation.”  [3] Andress, Elizabeth. “History, Science and Current Practice in Home Food Preservation.” Webinar. 27 February 2013. At: 1:32. Accessed January 2015.

What the state extension services say

Boil if you have reason to doubt:

New Mexico says, “To prevent the risk of botulism, chiles and other low-acid and tomato foods not canned according to the 1994 USDA recommendations in this guide should be boiled even if no signs of spoilage are detected. Boil food for a full 10 minutes at altitudes below 1,000 feet [300 metres]. Add an additional minute of boiling time for each 1,000 feet [300 metres] of elevation. Boiling destroys botulism toxin. If in doubt, always boil foods before tasting.”  [5] Flores, Nancy. Canning Green Chile. New Mexico State University. E-308. May 2008. Accessed May 2015 .

As Dr Andress said, some of the state extensions will override the USDA recommendations and tell you to boil home canned veg even if you canned it yourself and know you followed the recommendations to the letter, just because that is their risk comfort level.

University of Wyoming says, “Regardless of the age of the food, always boil low-acid, pressure-canned food a full 10 minutes plus one minute per 1,000 feet [300 metres] of altitude above sea level to destroy any botulism toxins. Do not taste the food prior to boiling, and do not eat the food if it foams or has an off-odor during boiling.”  [6] Griffith, Patti. The time is ripe for summer melons. University of Wyoming Cooperative Extension Service. From series “Canner’s Corner: Enjoying Summer’s Bounty.” Issue Two. MP-119-2. Accessed March 2015.

How long should you boil it for?

You will have noted that the USDA, the NCFHP and some state extensions say 10 minutes.

But, you will even get some of the extensions saying, boil your home canned goods for 20 minutes (particularly in those states with higher altitudes.)

Colorado State says, “As an added precaution, boil all home-canned vegetables and meats without tasting for 10 minutes plus one minute per 1,000 feet above sea level (15 minutes at 5,000 feet). Boil home-canned spinach and corn 20 minutes before tasting.”  [8] Kendall, Patricia. Botulism. Colorado State Extension Service. Publication no. 9.305. May 2012. Accessed June 2015.

Montana says, “All home-canned non-acid vegetables should be thoroughly boiled for 15 minutes before using, unless they have been canned by recommended methods and processed in a pressure cooker that is operating accurately. ”  [9] McClelland, Bessie E. Causes And Prevention of Spoilage In Home Canned Food. Bulletin (Montana Extension Service in Agriculture and Home Economics); 234. 1945-07-01. Page 5.

It would appear that “boil” is the most convenient way of communicating to people the kinds of temperatures that would be required, but that technically, it’s actually a bit less. Many people of course don’t have accurate instant read food thermometers, so bringing food to 100 C / 212 F (i.e. boiling with visible bubbles( is the safe, convenient recommendation with a sensible margin for error. The purpose of the following quotes is not to dispute that, just to acknowledge what the actual science is.

Ontario, the province in Canada, says “While botulinum spores can survive in boiling water, the botulinum toxin is heat-labile. When possible, heating canned food to a temperature of 85°C (185°F) for a minimum of five minutes before immediate consumption can reduce the risk of illness.”  [13] Ontario Agency for Health Protection and Promotion (Public Health Ontario). Home canning: literature review. Toronto, ON: Queen’s Printer for Ontario; 2014.
ISBN 978-1-4606-4166-8 [PDF] page 9.

If you are going to boil your home canned products, do it on a stove

If you feel the need to boil your home canned products before eating, Oregon says do it on a stove, and don’t use a microwave:

Boiling low acid home-canned foods in a microwave as a safety precaution before eating is not recommended. A full 10 minutes of boiling is still needed because of the time-temperature relationship necessary to destroy botulinal toxin. This would result in overcooking if the microwave is used. Use the range instead.”  [14] Preserving food with help from your microwave. Oregon State University Extension Service. SP 50-538 Reprinted March 2013. Accessed March 2015.

The boil order originated because of history

“All meats and non-acid vegetables canned by other means than the pressure cooker [Ed: pressure canner] must be boiled for 10 to 15 minutes before they are tasted.”  [15] Gilbert, Muriel Dundas. Successful Home Canning. Michigan Extension Bulletin No. 132. May 1933. Page 5. Accessed March 2015

So Michigan is saying, “If it wasn’t pressure canned, don’t trust it.” Back then, they still “allowed” the possibility of many hour boiling water bath processing sessions for non-pickled vegetables and meat, even though they suspected it wasn’t adequate. To be fair, many people were poor and couldn’t afford pressure canners: home economists may have still been trying to allow people a slightly cheaper way of canning food. It’s very sad to think of all the cooking fuel costs that were wasted when in fact it was just luck of the draw if botulism spores were in your water-bathed green beans. In any event, thus the origin of the “boil” order to try to ensure safety: it was in case the food was not canned according to preferred methods.

It’s possible for preserves such as jams, jellies, relishes, pickles, etc. to develop the botulism toxin in them, if tested recipes weren’t used.  It’s not just theoretical, in fact: it’s happened. So if the super-cautious state extensions are going to be thorough, why aren’t they telling you to boil your strawberry jam and dill pickles for 20 minutes, too?

People who’ve had aquariums know that if your fish get sick, you don’t treat the fish, you treat the tank as a whole. Home canning safety is a bit like that: you need to trust your procedure overall.

There’s now over 100 years of science behind the USDA canning recommendations: recommendations that in those 100 years have been documented, with some crossed out and acknowledged as wrong and corrected, then refined, and the others re-verified to the present day. And there’s something they don’t tell people: they have costed in errors of margin and variability up the whazoo. They won’t say where the margins are, or how large they are, because then some people will try to “cash in on” that knowledge and push the envelope to the limits.

The USDA procedures are extremely safe, if pernickety and exacting. Many home canners would say that it’s best to stress about following their procedures exactly in putting your home canned food products on your pantry shelves. Then, when you go to grab them in a hurry, you can do so without a worry or a second thought, and certainly no third thought about boiling your carrots or dill pickles for 20 minutes when people are pointing at their mouths to be fed.

If you are going to take home canned food, and then boil it for 10, 15, 20 minutes until there is no taste, nutrition or texture left, then many cooks would certainly suggest that you have to ask what is fundamentally wrong about all this — why are you not just freezing your food instead.

The USDA’s advice is, if you have followed their procedures to the letter, you do not need to boil your home canned veg; you can use them as is off the shelf with confidence.

If you have the slightest doubt about any food, be it home canned or commercially canned or from whatever source, most sensible cooks would probably ask why you are even considering eating it in the first place. Either you trust the food, or you do not. This might perhaps best be summed up by a home canner going by the name of “Songbird”, who said on the Internet in 2015,

The sites that recommend boiling something for 15 minutes if you suspect it might be bad are just plain crazy, IMO. I’d just dump it and be safe instead.”  [16]User songbird in rec.food.preserving 25 April 2015

If you doubt a food enough from any source that the “boil” recommendations would apply to it, then why are you not just disposing of it instead?