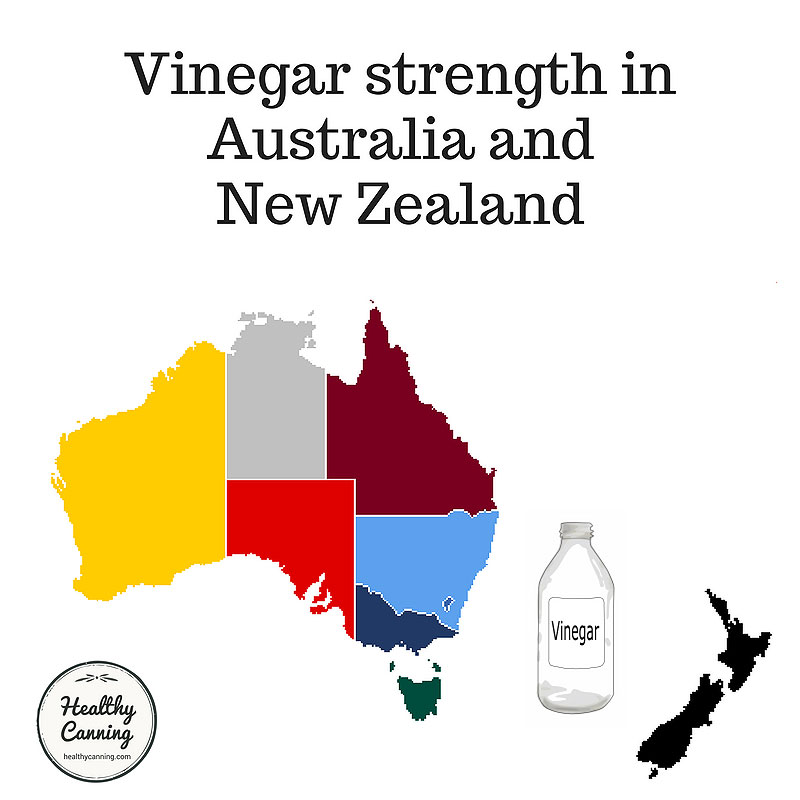 Vinegar strength is important in some forms of home food preservation.

Standard household vinegar as sold in Australia and New Zealand is slightly weaker than that sold in other countries such as the US, Canada and England.

Consequently, when using pickling recipes from North America or the UK, home bottlers in Australia and New Zealand need to make a slight adjustment to end up with the same acidity level that the recipe writers are counting on. (And remember to only use modern, tested recipes from reputable sources.)

First, we’ll cover a summary of how to handle this for those looking for quick, direct information, and then, we’ll cover the background.

If you are in Australia or New Zealand, you may need to take special measures to ensure you are using the proper vinegar strength in your preserves.

This applies especially when you are using North American preserving recipes (Ball, Bernardin, USDA, National Center, etc.) or recipes from the UK. These recipes will presume the standard vinegar strength is 5%, whereas in Australia and New Zealand, it is only 4%.

To compensate, you can do one of the two easy steps:

Now, onto the background information for those who want to know more.

The minimum legal strength for vinegar sold commercially in Australia and New Zealand is 4%. That means, it will contain at least 4% acetic acid.

Labelling of vinegar strength is voluntary

In Australia and New Zealand, labelling of vinegar strength appears to be voluntary. We were unable to find any regulatory requirement calling for it, and, much vinegar in the two countries is sold with no strength listed on the containers. For the purposes of safe, quality pickling, you have to assume such unlabelled vinegar as being only 4% unless you contact the manufacture and ask.

We located the strengths of a few common vinegars, but had to go to data sheets on the manufacturer’s websites to find them. Jars of these vinegars do not list their strengths, but the data sheets revealed that they are in fact just 4%.

Vinegar prepared for domestic use contains 4 per cent acetic acid… Be wary of using American or UK recipes for pickling as in those countries vinegar contains 5 per cent acetic acid whereas in Australia our vinegar is 4 per cent acetic acid. To correct for this you should multiply the recipe vinegar amount by 1.25. For example if an American recipe calls for 60 ml vinegar, multiplying this by 1.25 gives you 75 ml for Australian vinegar. Using the American recipe straight probably won’t make you ill, but the product may spoil. Never add or increase the water content of the recipe as this will dilute the acid and you may not reach a safe pH.” [2]CSIRO. Vegetable Preservation. Updated 22 December 2017. Accessed Feb. 2018 at https://www.csiro.au/en/Research/Health/Food-safety/Vegetable-preservation

In New Zealand, some vinegars are advertised as “double strength.” This presumably means double the minimum required by law.

You could safely use this for your preserves — provided of course you are buying one listed as “food safe” rather than one marked for cleaning or agricultural purposes.

As a side note, New Zealand has led the way in making vinegar from lactose.

If you’re in a household which keeps kosher, such vinegars are considered dairy as far as kosher rules go, so bear that in mind for your pickling.

Tagged With: Australia, New Zealand
If you need FAST or relatively immediate canning help or answers, please try one of these Master Food Preserver groups; they are more qualified than we are and have many hands to help you. Many of them even operate telephone hotlines in season.