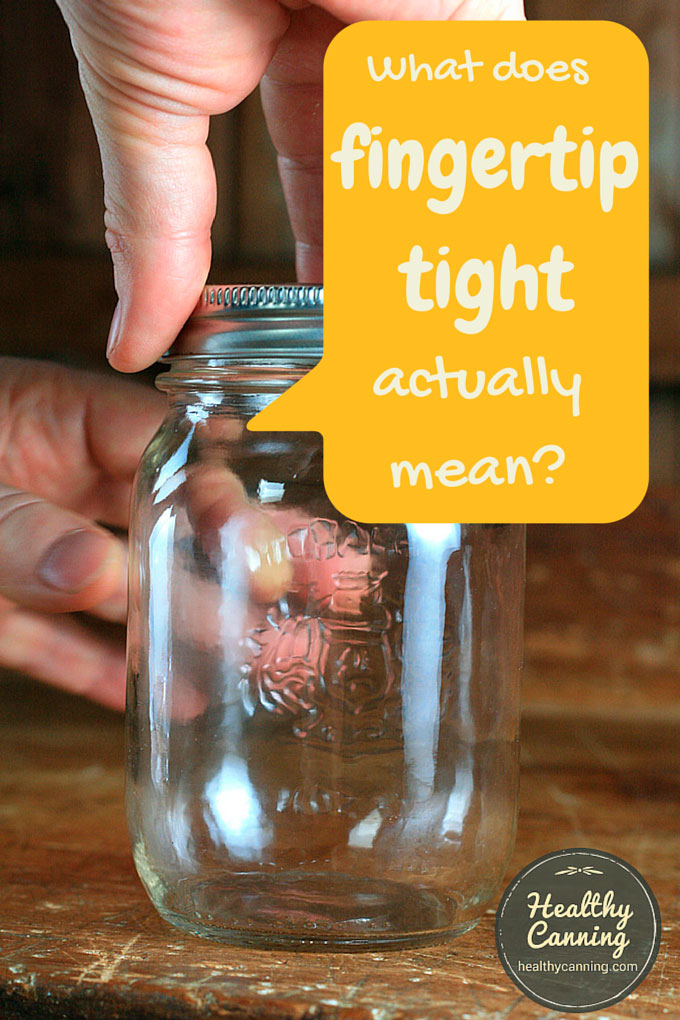 Tighten the screw ring band on your mason jar to “fingertip tight.”

There may never have been before a looser definition of tightness! It leaves many people confused.

What is the purpose of the canning ring?

The purpose of the ring is not to create any kind of seal in any way: the ring only has a very temporary function, and that is to hold the actual flat lid in place during processing. Without a canning ring, the lid would almost certainly just flap about until it got carried off in the canner.

Once the jar cools and the seal has been created, the ring has served its purpose; it has no more use and is taken off and stored away until it’s needed again.

How tightly should the canning ring be screwed on?

“Fingertip tight” is the phrase usually given as the answer to the question of how tightly the ring should be screwed on.

The usual explanation is that this phrase means gentle force from your finger tips, as opposed to arm wresting force from your biceps, and don’t use a wrench or a tool to tighten it up like it’s on a car assembly line.

So, snug, but just so and no more, and certainly not rammed on like you’re trying to make sure that even Conan the Barbarian will never break in.

Screw on the metal ring firmly, but not as tight as possible.”  [1]Ziedrich, Linda. The Joy of Pickling. Boston, Massachusetts: The Harvard Common Press. 2009. Page 24.

So it needs to be on quite firm. One of the beginner mistakes is being so worried about having it too tight, that the user errs in the other direction and has it too loose, resulting in unnecessary liquid loss from the jar particularly during pressure canning.  [2] Elizabeth L. Andress. Ph.D. and Judy A. Harrison, Ph.D. General Canning Information: Causes and Possible Solutions for Problems with Canned Foods. National Center for Home Food Preservation. Accessed March 2015 at https://nchfp.uga.edu/how/general/cannedfoodproblems.html

You want the ring to be just loose enough to allow air in the jar to escape — and don’t forget, there’s more air in the jar besides what you see in the headspace.

There’s air trapped between pieces of food, there’s air in the canning liquid, there’s even air inside the pieces of food. The jar needs to vent this out during processing, because oxygen can cause spoilage. Then, when the jar cools down, this absence of air inside the jar will be what creates the hermetic vacuum seal, so the venting has a double purpose.  [3] What stops water going into the jar is the snugness of the ring, but also as the jar heats, the pressure inside the jar of air trying to get out prevents water getting in.

Overtightening the ring could cause the lid to buckle or the jar to break, or could prevent air from venting during processing, so the pickle wouldn’t keep as long.”  [4]Ziedrich, Linda. The Joy of Pickling. Boston, Massachusetts: The Harvard Common Press. 2009. Page 25.

So, while at first you might think that putting the ring on crazy tight will help you get a better seal, in fact, it works against you: it prevents proper venting and your jar may not seal at all.

How do you know when you’ve hit the right balance?

Here are some definitions:

A practical way to determine if the lid is fingertip tight is to place the band on the jar, turn it just until you feel resistance, then turn the band one-quarter turn more.”  [5] Clemson University Extension. Tighten Your Lids – But Not Too Tight. Accessed April 2015 at https://www.clemson.edu/extension/food_nutrition/canning/tips/08tighten_lids.html

Screw band down until resistance is met, then increase to fingertip tight.”  [6] Bernardin. https://www.bernardin.ca/pages/recipe_page/51.php?pid=521. Accessed March 2015

Some people say, the same tightness as you would apply to the lid of a jar of something such as mayonnaise or jam that you were putting back in the fridge.

The University of Missouri Extensions says,

Here’s what the Kerr company, who invented this lid and screw band system in the first place, used to say:

Our instructions to screw the bands tight mean as tight as the hand can screw the band without using a jar wrench. Use the full force of the hand. If commercial jars which are slightly wider across the neck than Kerr Mason jars, are used, it is especially important to use force in tightening the screw band, because the wide jar neck will ride out on the turned down end of the lid and this has a tendency to hold the lid up off the sealing edge of the jar.”  [8] Answers to your canning questions. Kerr. Page 53. 1948. Accessed March 2015 at https://www.endtimesreport.com/5-Kerr_1948_Canning_Questions_and_Answers.pdf

Despite the warning above not to use a wrench, in fact the Jarden company which now owns Kerr has in fact released a wrench specially for this under the Ball® name called the ‘Sure Tight™ Band Tool.’ Ball says, it “secures jar bands with just the right amount of torque. Getting a good seal starts with securing the band to the correct force. This tool takes the guess work out of securing the band to ‘fingertip tight’ ”.  [9] Ball Accessories page. Accessed April 2015 at  https://www.freshpreserving.com.au/products/accessories.aspx

After processing, and after the jars have cooled, do not be tempted to tighten the rings — in fact, do the complete opposite. Remove them completely, and leave them off. Store the jars without the rings on.

In any event, it’s probably far past time for a better phrase than “fingertip tight”, but until a better one is popularized (and canners don’t like change to start with), we’re stuck with this one for the foreseeable future.