Home / Home canning concepts / Why would a canning jar lose its seal? 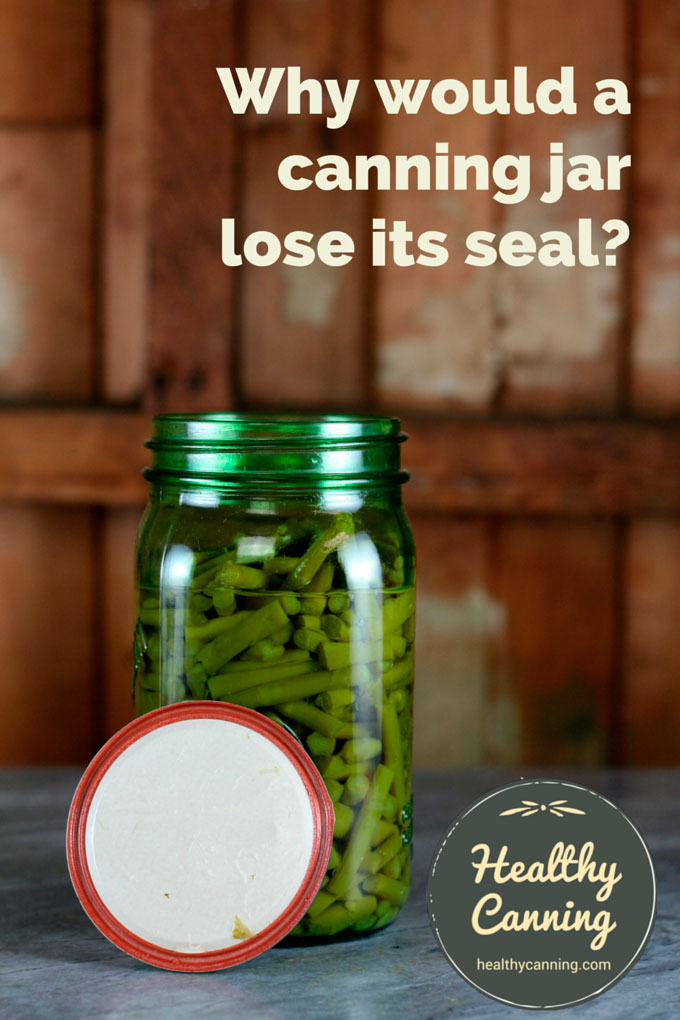 Having a jar on the shelf that loses its seal happens to everyone once in a while. If it happens frequently, there is a problem.

What are the most common reasons?

Generally some experts say, your recipe was bad or your processing method was bad. A “bad” processing method could involve using a water bath when you should have pressure canned, or using an unsafe canning method, such as Open Kettle Canning or Oven Canning.

Jessica Piper, Ball spokesperson, says the number one reason is consumer error. One error is not using a proven, tested recipe:

The number one reason why lids come unsealed, based on the calls and everything that we get into our consumer affairs department, is when someone is using a personalized recipe, something that is your own, it’s not been tested, the problem with doing a homemade recipe is you don’t know the acidity, or the pH in general of that food going into your jar, .. at home you don’t have the tools to know, and even if you do have any kind of tools to figure out what the combined acidity of your recipe is, the next factor is the density, so when you’re processing you’re actually, um, the USDA has done thorough testing to find out what kind of heat penetration is needed to the coldest spot in your canner to kill the bacteria that is present and so if that doesn’t happen that bacteria can grow on like I said a smorgasboard in your beautiful canned goods jars, so one of the things, always follow a USDA tested and approved recipe, you can always add dry ingredients, like dry red pepper flakes, or maybe cinnamon to apple sauce, or maybe something else to add some flavour, but always use dry, using fresh changes the pH, so number 1 typically has to do with the recipe itself and going on further from the recipe, the actual processing method,”  [1] Jessica Piper. Video: Canning Lids 101. 25:34 . Accessed March 2015.

She goes on to say that another error is water bath canning foods that should have been pressure-canned:

We still get quite a few folks call in who are water bath canning low-acid foods. The USDA deemed that unsafe decades ago .. so if you are water bathing, you are not necessarily killing the bacteria.. the bacteria that can grow in low acid foods such as vegetables, meat, stews, they require a temperature of 240 degrees F (115 C) , you will never get to 240 degrees F (115 C) in a water bath, you will max out at 212 (100 C), which is fine for high acid foods, not the case with low acid, it doesn’t matter how long you cook it on your stove, it’s not going to get to 240 F (115 C). So following a proper recipe and proper processing if you don’t do those things is the number one reason why lids come unsealed…..”

She also says that playing with the canning ring after processing, and incorrect headspace can cause lid failure:

Lids can also come unsealed if after you remove them from your canner… and notice your band is a little loose and you go, oh I’ll just tighten it a little bit, you’re actually affecting, as soon as you start taking that jar out of the canner that venting process is going on and it’s really working to get that tight seal and you adjust the band, you could prevent that from happening. Also too head space can cause things to unseal.”  [2] Jessica Piper. Video: Canning Lids 101. 27:00. Accessed March 2015.

Turning jars upside down after processing can actually weaken or break the seals — if not then on the spot, then loosen them for long-term.

Why would it happen to careful canners?

So are there any other reasons for the occasional jar coming unsealed on them?

The Presto company adds these reasons in its FAQ  [3] Presto FAQ, accessed July 2015.   which would perhaps be more likely to be a cause of seal failure for experienced, safe canners:

There’s two more possible reasons. The first is that home canners get set in their ways and don’t always like change. We’ve been told to no longer boil the metal canning lids, but many people are reluctant to stop doing that.

Ball says now that boiling the lids can weaken the lids and cause seal failures:

And most importantly too like I mentioned before if you boil you lids, they can get a false seal, or seal too early, and maybe there was an issue with the pressure and later down the road they can come unsealed.”  [4] Jessica Piper. Video: Canning Lids 101. 27:00. Accessed March 2015.

The second reason would be re-using in error the one-time use only metal lids.