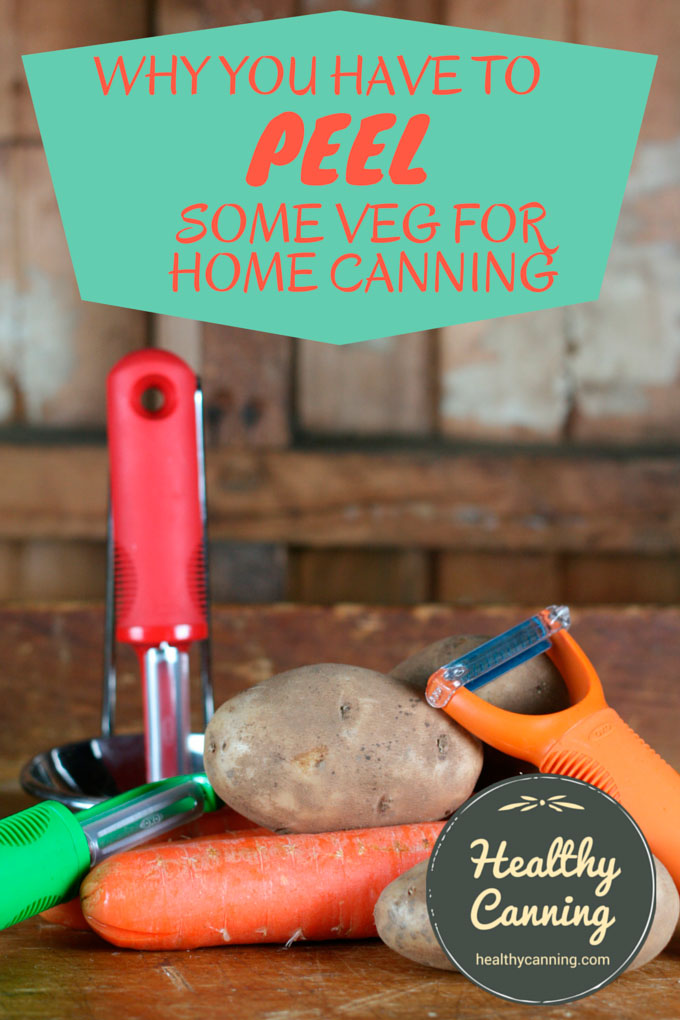 Leaving the peel on vegetables such as carrots and potatoes whenever possible is the hallmark of a good, thrifty and nutrition-wise cook. In fact, under World War Two rationing in Britain, you’d have got your knuckles wrapped for wasting food and vitamins by peeling them!

But, for home canning, that’s exactly what we have to do: peel produce when recipe directions tell you to. The reason is to reduce the bacterial load as much as possible before the canning process even starts. It’s for safety. The canning processes and times for that produce was developed with that produce in its peeled form, perhaps because that is how the researchers at the time presumed most people would prefer them.

The authors of “Putting Food By” say, “Don’t assume that ‘it’s going to be cooked anyway’ will counteract all the extra contamination. Remember that an excessive bacterial load can tax your preserving method beyond the point where it is effective.” [1] Janet Greene, Ruth Hertzberg, Beatrice Vaughan. Putting Food By. New York: Penguin. 2010. Page 5.

This also applies to home-canned apples — all the lab-tested recipes call for them to be peeled and the safety testing for home-canned apple slices and applesauce presume you have followed directions.

By the way, wash even before peeling. This helps to reduce the bacterial load right at the very start, by reducing the surface contaminants available for your peeler to push into the exposed vegetable. In fact, wash, peel, then wash again.

To be clear: none of this caution negates the need for proper heat processing of your product using a tested recipe from a reputable source.

Why you peel beets

The majority of the microbial load on beets is on the outer layer, or the skin, of the beets. Boiling the beets prior to canning not only destroys some of the microbial load, but also allows skins to be more easily removed from the beets, thus removing even more microbes which could cause spoilage or sickness.”  [4] Andress, Elizabeth L. Email to Randal Oulton, 9 January 2015. On file at HealthyCanning.com.

Why you peel potatoes

Our recommendation is to peel potatoes before canning. That style of preparation is how the research was carried out to determine the recommended processing, and in order to know that the peeling does or does not make a difference, research would need to be done with unpeeled potatoes. Different assumptions might be needed in assessing just how many spores of C. botulinum or other bacteria might be present at the start of the process and what amount of heat might be needed to meet standards for the risk of possible survivors. We do not know of research of canning potatoes with peels left on, so we recommend the preparation steps provided with the process recommendation, especially because there is a possibility that the deviation could result in a less safe situation.”  [5] NCHFP. Preserving Potatoes. Blog entry posted 6 October 2014. Accessed July 2015 at https://preservingfoodathome.com/2014/10/06/preserving-potatoes/

Why you peel carrots

One important difference to canning between peeled and unpeeled carrots is the potential difference between bacterial loads going into the canner. In other words, removing the peel from carrots substantially reduces the amount of bacteria on the carrots. Carrots with peel left on, even if washed well, would likely contain more microorganisms when compared to peeled carrots. Before recommending canning carrots with peels left on, we would need to see product development testing that accounted for the increased microbial load and any other possible changes with peel included in the jars. Although you don’t see much reduction in fiber after canning, you will still lose some of the nutritional value in the peel that comes with heating and sitting in water, just as you do with the flesh of the peeled carrot. There is no nutritional analysis or comparison available for carrots canned with or without peels, especially since carrots canned commercially do not contain the peel, and those are the source of most of our nutritional values for canned foods. ” [6] NCHFP comment 25 November 2014 on: Preserving Potatoes. Blog entry posted 6 October 2014. Accessed July 2015 at https://preservingfoodathome.com/2014/10/06/preserving-potatoes/

Why you peel tomatoes

Peeling tomatoes may seem like an unimportant extra step, but the texture of the skin was determined to be undesirable and product testing did not include considerations of how the skin would alter the final product safety. So, scald, peel, and chop tomatoes as described in the procedure. Our canning recommendations are meant to be followed as written, since that is how they were developed and changing ingredients or steps may influence not only the quality but also the safety of the final product.” [7]National Center for Home Food Preservation. Preserving Food at Home Blog. Try It: Tomato Jam. 19 August 2015.

We have a whole page dedicated to peeling tomatoes for canning.

Other veg that need peeling

Don’t despair, lazy peelers: it could be worse. Back in 1948, before the recommendations were all updated, they even wanted you to peel mushrooms as well:

But just imagine all those people who for years peeled all those mushrooms, for nothing!

Wash the potatoes and carrots before peeling (you should anyway, to start reducing the bacterial load right away.) Save all the peelings. Boil or pressure cook them in some water for a bit, then strain the peels out. Freeze the broth for wonderful carrot / potato broth to use in soups, stocks, as the liquid for stuffings, etc. Use the peels for garden compost or animal feed. A great deal of the nutrition and flavour from the peels will be captured in the broth.