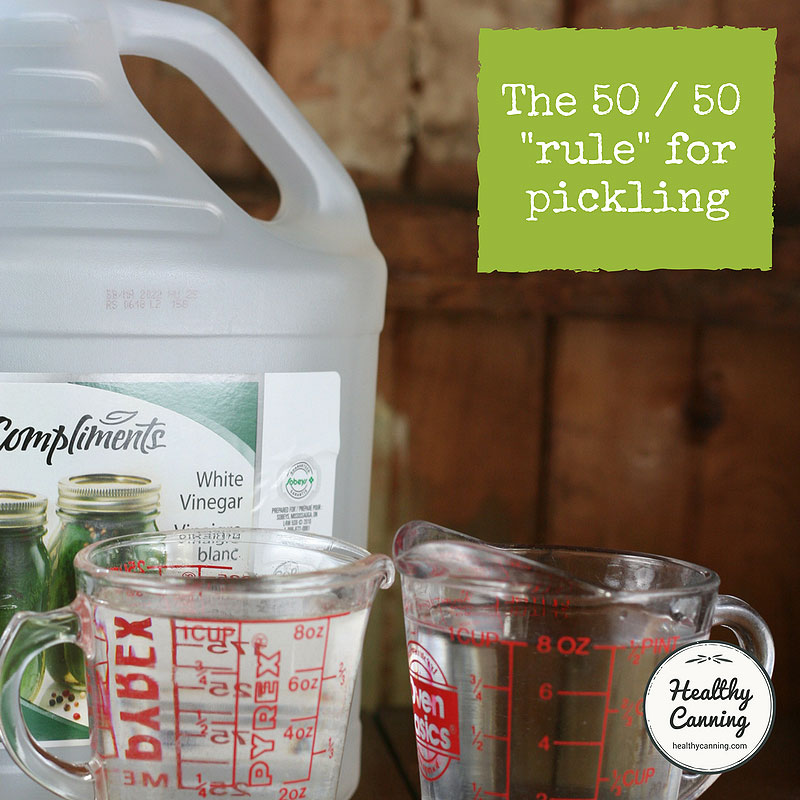 The 50 / 50 vinegar/ water ratio guideline for pickling is a “harm reduction” safety guideline used by some people as one of the factors in evaluating whether a pickling recipe is safe or not.

It means that the brine should be no more than 50% water, with the other 50 (or higher) percent being vinegar (5% or higher in strength.)

It applies to fresh-pack (aka vinegar) pickles meant for shelf-stable storage.  It can also apply to other pickled products such as relishes and chutneys, etc.

It really only comes into play when evaluating recipes that have not been lab-tested.

We’re addressing this topic simply for the sake of thoroughness because people will come across it. The actual official recommendation is in fact not to use such untested recipes, but instead look for and use equivalent modern, tested recipes from reputable sources. And, not all authorities endorse this rule: the National Center for Home Food Preservation does not back this 50 / 50 rule as a guarantee of safety.

When the rule does not apply

You don’t think to be concerned about this rule when you are looking at:

Not a guarantee of safety

Note that this is guideline is not an iron-clad guarantee of safety for shelf-stable items. A recipe could still be unsafe:

Ratio can be lower if recipe is lab-tested

Should you see a pickling recipe using less vinegar than water in the brine, check to see if the recipe is a modern one from a reputable source — modern meaning roughly from the 1990s onwards, and reputable meaning someone qualified as a home food preservation expert (not just a chef, cookbook writer or blogger.)

Here for instance are two lab-tested recipes that have a lower ratio of vinegar.

This is acceptable for both recipes because the lower ratios were tested to be safe for those particular combinations of items.

Ratio can be lower if a package mix is used

Some pickling package mixes such as those from Mrs Wages, etc, will often direct you to less use water than vinegar with the mix. But, you will usually see the ingredients of such packages listing something such as citric acid, which is a very strong acid. That would be where the seemingly “missing” acidity is coming from.

How is this guideline helpful

This guideline can be a helpful tool in evaluating untested personal pickling recipes.

The experts really prefer, urge, and recommend that you use up-to-date tested recipes from reputable sources, as stated above.

If, however, someone is bound and determined to use one of “grandma’s old recipes” despite all the cautions, this guideline can act as a “harm reduction” tool.

Why are so many old recipes a problem

So many old recipes are a problem because:

The social media photos looking at the past with rose-tinted glasses always fail to mention the incredible amount of spoilage there was with the older methods of canning.

This guideline doesn’t come from the USDA, or from the National Center for Home Food Preservation. It is, however, supported by some members of the Cooperative Extension Service system.

Growth of food poisoning bacteria will be prevented when the starting pH is below 3.5. From a practical standpoint, this acid level is attained when the pickle solution contains one or more parts of 5% vinegar to one part water.” [1]Rasco, Barbara. Pickling Fish and Other Aquatic Foods for Home Use. Oregon State University. PNW 183. 2009. Page 2.

Fresh-pack or quick pickle recipes are considered safe if the ratio of vinegar to water or other liquid is at least 1:1. The proportion of vinegar can be higher, and in some recipes vinegar makes up all the covering liquid”. [3]Washington State University Food Safety Advisor Handbook. Preparation and Canning of Pickled Foods. Ingredients / Vinegar. Updated March 2015.

Vinegar must be at least 5 percent acetic [acid] so that low acid vegetables such as cucumbers are properly acidified. Never dilute the amount of vinegar stated in a recipe. For every cup of water, add 1 cup of vinegar. The acid must be uniform throughout the vegetable to prevent the growth of botulinum bacteria. Use white vinegar to pickle light-colored fruits and vegetables. Never use homemade vinegar—there is no way to know its true acidity. ” [4] Judy Henderson and Carrie Thompson. Making Pickles in North Carolina. North Carolina Cooperative Extension Service. FCSW-497-06. Accessed September 2017 at https://fbns.ncsu.edu/extension_program/documents/foodsafety_making_pickles_in_NC.pdf

What about stronger pickling vinegars

In Canada, and the UK, to name just two countries, stronger vinegars, labelled pickling vinegars, are still commonly available in stores. These have strengths of 6%, 7% and higher.

See the separate discussion dedicated to pickling vinegars, but the long and the short of it is that the only safety recommendations we have available that we currently know we can trust are based on a minimum 5% strength, so just use the same amount of 6 or 7% vinegar as the recipe calls for of the 5%. 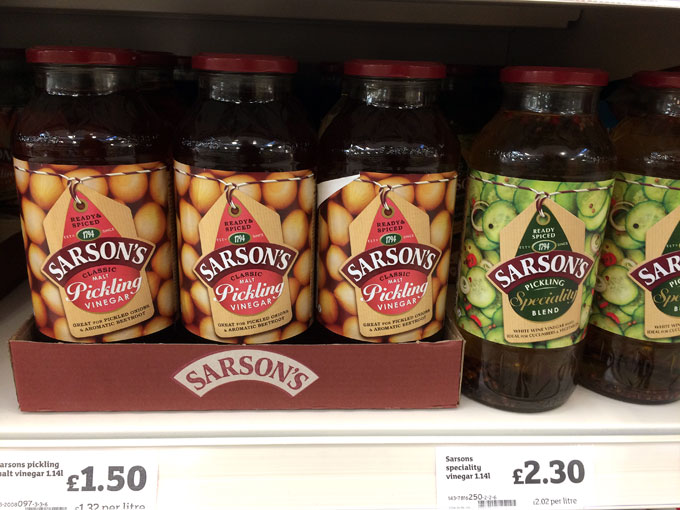 What about the role of salt and sugar

Doesn’t putting enough salt or sugar into your pickles make up for lower quantities of vinegar?

No. In home canning, aside from a very small handful of recipes, salt and sugar are not safety preservatives, unless you essentially fill the jar with nothing but salt and mummify your pickling cucumber into a mini version of Lot’s wife.

For the type of high-acid products being discussed here — pickles, relishes, chutneys, etc — your safety comes from the proper acidity and from subsequent heat processing of the filled jar.

There is one wrinkle to this. If one is bound and determined to use a pickling recipe that doesn’t include heat processing treatment of a jar intended for shelf-stable storage, then spoilage microbes may be still alive in the jar because they weren’t killed off by heat. In this case, salt and sugar may help to inhibit those microbes still alive:

Beware, though, of reducing the proportion of vinegar to water in a recipe for pickles to be either canned or stored at room temperature without canning. This would lessen the acidity of the pickle, perhaps making it unsafe to eat. Although salt and sugar may combine with vinegar to inhibit microbial growth, fresh pickles generally should contain at least one part 5 percent vinegar for each part water. (Follow this rule of thumb in judging whether Great-Grandma’s old pickle recipe is safe to use. She may have used less vinegar because her vinegar was more concentrated.) Take care also not to boil pickling liquid for a long time, since acetic acid evaporates faster than water does. Boil pickling liquid only as long as the recipe calls for. Then, if you’re not ready to use the liquid immediately, remove the pan from the heat and cover it.” [5] Joy of Pickling, by Linda Ziedrich, 2009. Page 11

But if a recipe for unrefrigerated jars of pickles doesn’t include heat processing, the best course of action is to look for a modern, tested recipe from a reputable source that comes close to making the pickle you want.

Some people say that they find the taste too tart when the brine is 50% or more vinegar. The suggested solution is to add a bit more sweetener (it’s safe to do so: it’s just a dry seasoning in these recipes) to help mask the tartness.

Tagged With: Vinegar
If you need FAST or relatively immediate canning help or answers, please try one of these Master Food Preserver groups; they are more qualified than we are and have many hands to help you. Many of them even operate telephone hotlines in season.