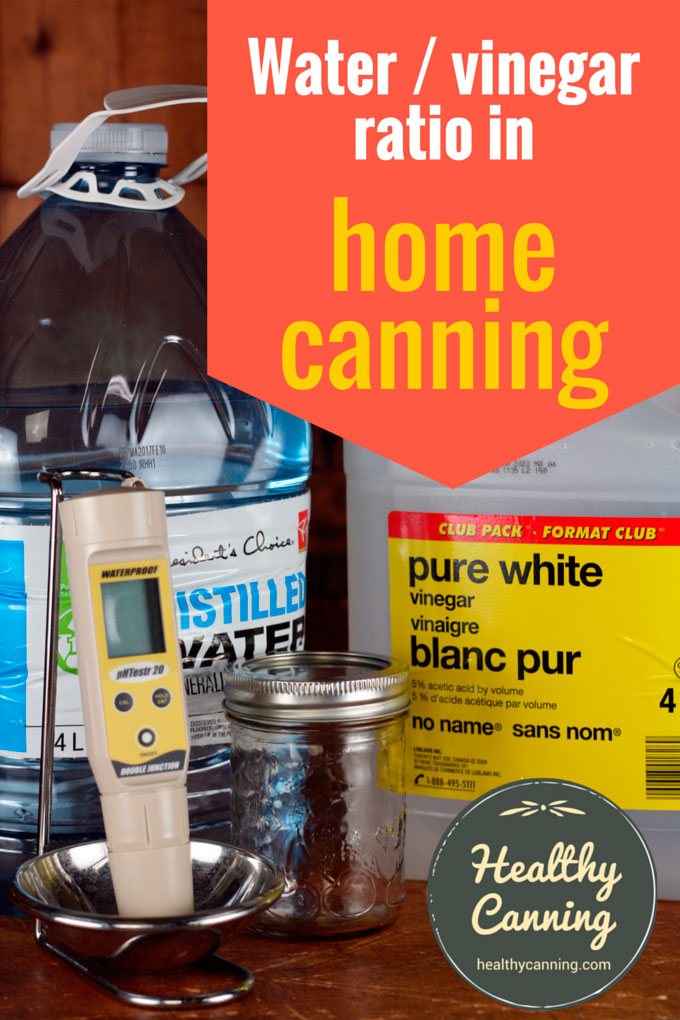 It’s fine to raise the vinegar to 60% and lower the water to 40%, but you can’t do the opposite: it’s not okay to lower the vinegar.

There’s always annoying exceptions in canning rules, and this is no exception: you will see approved and tested recipes with a lower vinegar / higher water ratio in lab-tested recipes from Ball, Bernardin, NCHFP, USDA, University Extensions, etc. The reason that is fine is because those recipes were lab-tested, giving the clearance for those exceptions.

But, should you be assessing a recipe from somewhere else, that 50 % vinegar ratio is the lowest proportion of vinegar considered safe in a pickling mixture if you are not using a tested, approved recipe — which, to be clear, you should be. This page and discussion is an intellectual exercise only!

On this page, we’re going to show you just how safe the tested recipes are. To be clear, the goal is not to encourage anyone to muck with acidity levels or invent their own recipes, but rather, it’s to assure them of the complete safety of tested home canning recipes from reputable sources.

Note: all vinegar sold in North America is diluted down by manufacturers to the strength desired for a given product. When we talk below about diluting the vinegar down, what is meant is adding water to the 5% acetic acid strength vinegar as sold (which of course has already been diluted down from 100% concentrated vinegar.)

At this point (2016), we haven’t succeeded in tracking down the actual origin of the rule: who first said it, or did the research that established it.

Here are two reputable sources supporting it, though.

Vinegar must be at least 5 percent acetic so that low acid vegetables such as cucumbers are properly acidified. Never dilute the amount of vinegar stated in a recipe. For every cup of water, add 1 cup of vinegar.” [1]Henderson, Judy and Carrie Thompson. Making Pickles in North Carolina.
North Carolina Cooperative Extension Service. FCSW-497-06. January 2001.

The Washington State University Food Safety Advisor Handbook (March 2015), which is used to train Master Food Preservers, says in the section on “Preparation and Canning of Pickled Foods” under Ingredients/Vinegar:

“…fresh-pack or quick pickle recipes are considered safe if the ratio of vinegar to water or other liquid is at least 1:1. The proportion of vinegar can be higher, and in some recipes vinegar makes up all the covering liquid”.

Some quick background about pH

Unless something is going to be pressure canned, then to be home canned a food product needs to be water bathed AND have a pH of less than 4.60.

The pH scale goes from 0 to 14. The lower the number, the more acidic it is, which is what we care about. (7.0 is considered the middle — neutral; above that up is considered alkaline.)

The pH scale is a bit like the Richter earthquake scale, in that a teeny increment matters. In the pH scale, 2.0 is 10 times more acidic than 3.0, because it’s 10 x .1 increments lower than 3.0, and the closer you get to 0 the more acidic something is.

In home preserves, pickles, relishes, jams, jellies, chutneys, etc, you want a pH lower than 4.60. The reason 4.60 is the magic number is because above that botulism can form. So, we want to stay below that. Ideally, well below that.

If you want more information than that, see The Role of pH in Home Canning.

The safe canning police bandy about the big B clobber word so much that they get people starting to imagine things they should be afraid of. One of the things  that some people consequently worry about is if the alkalinity of their local tap or well water will negate the acidity of the vinegar, raising the combined pH above 4.6 and rendering their pickling mixtures unsafe.

If this has ever occurred to you, when you see how much water is needed to nudge the pH down by increments, you may sleep a bit easier at night.

Before we get started

Before we start, we have to calibrate the pH meter. You have to calibrate it at the start of each session. It’s a pain, certainly, but pH readings are one of those things that are only worth doing if you do them completely right. 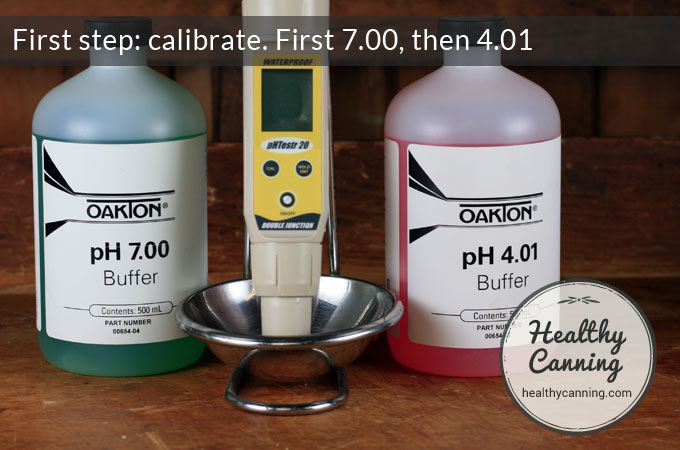 We are done calibrating.

Out of pure curiosity, let’s verify the pH of the distilled water and of the vinegar. 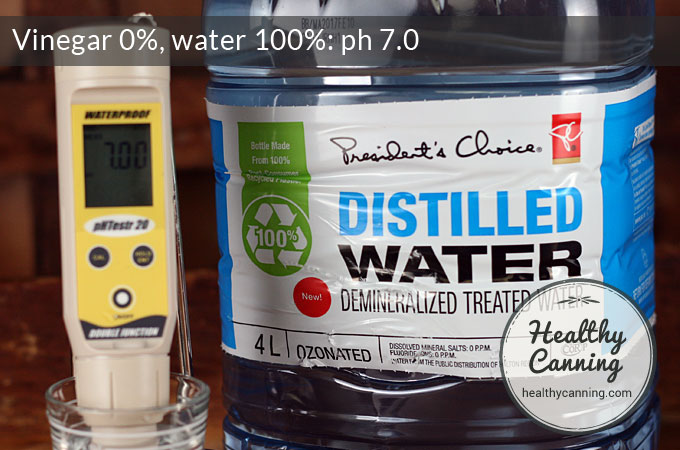 Yep, the distilled water comes in at 7.0  [2] Note: at least one meter maker says that pH meters can’t accurately read distilled water owing to the lack of ions on it, and that the readings will drift. This reading did in fact start to drift after a while, but this reading was just for curiosity, anyway. https://www.vernier.com/til/1286/ Accessed June 2015

Now, let’s satisfy our curiosity about the white distilled vinegar. 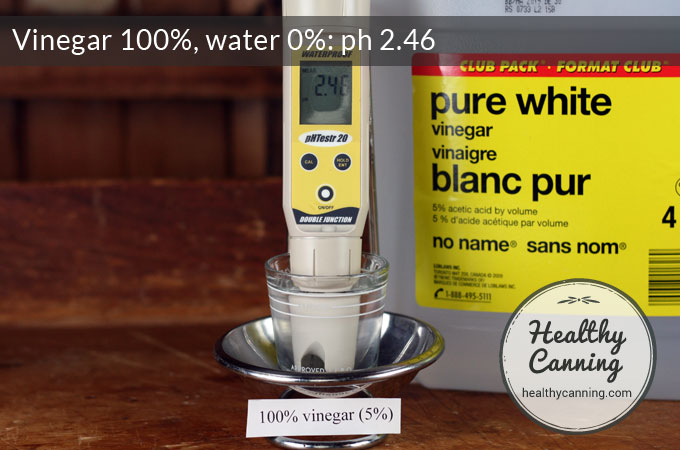 So, that’s great. Everything that we have been given to expect, is proving correct.

Testing the pH of various strengths of vinegar / water mixtures

Let’s now dilute the vinegar by 25% with water. 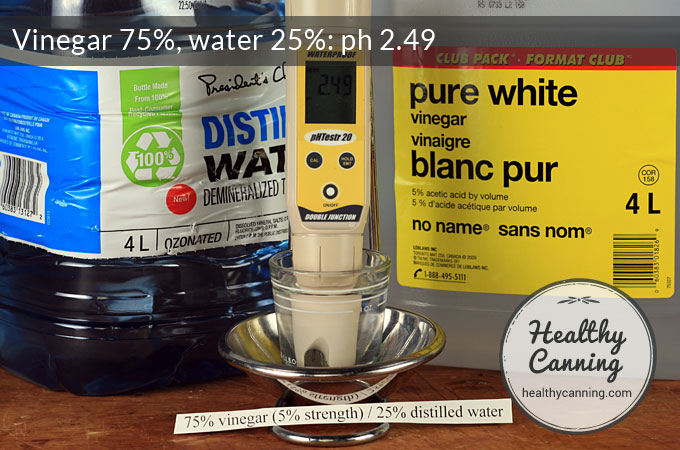 Let’s now dilute the vinegar by 50% with water. 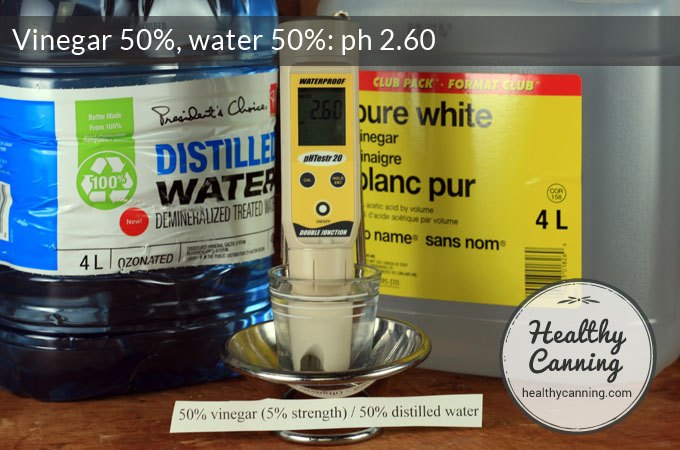 This ratio, by the way, is the lowest generally-accepted (barring lab-tested exceptions) minimum amount of vinegar with water pickling solution for home canning: 50 / 50

Let’s now dilute the vinegar by 75% with water. This is past the approved range, but this is just an experiment. 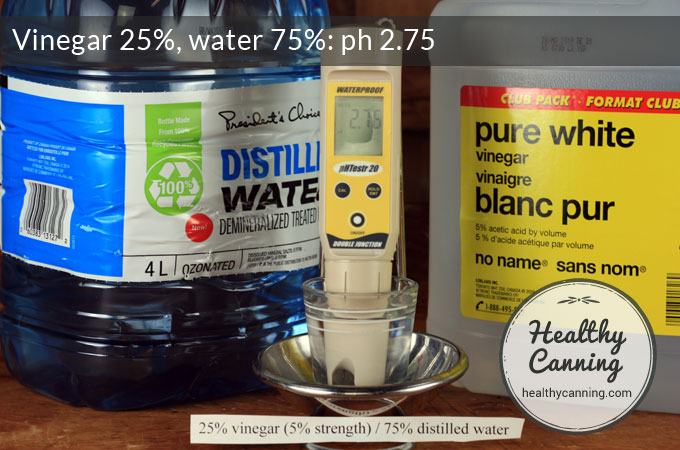 It appears to take substantial increases in the proportion of water to increase pH by just 0.1 steps.

But water isn’t added just via a measuring jug: there’s also water in the cucumber, peppers, onions, carrots, celery, etc. that gets released and floods into the food mixture. And, don’t forget, most approved canning recipes are written in maddeningly imprecise measurements such as “2 cups cut-up rhubarb”, which people are going to interpret in wildly different fashions and end up with wildly different quantities of “fruit water” being released into the mixture in the pot.

So it’s likely they picked the 50 / 50 ratio to well and truly account for those and other variables.

All this should demonstrate just how safe the tested recipes are, and that you can make, use and gift them with confidence knowing that there is a massively huge margin of safety built in. If you are following a tested recipe, even if you interpret the “chop” size of celery different from someone else, you are both well and truly covered.

That being said, there is apparently a minor word of caution. Any cooking of the relish, chutney, or pickling solution evaporates some of the acidity in the mixture away. That may be yet another reason they allow such a huge safety margin, to allow for that loss.

Take care not to boil pickling liquid for a long time, since acetic acid evaporates faster than water does. Boil pickling liquid only as long as the recipe calls for. Then, if you’re not ready to use the liquid immediately, remove the pan from the heat and cover it.”  [3]Ziedrich, Linda. The Joy of Pickling. Boston, Massachusetts: The Harvard Common Press. 2009. Page 11.

Avoid boiling for a long time any vinegar solution that is to be used as the canning liquid for pickles, because the acetic acid in vinegar is rather volatile, and it will lose its ability to keep stored pickles safe.”  [4] Hertzberg, Ruth; Greene, Janet; Vaughan, Beatrice (2010-05-25). Putting Food By: Fifth Edition (p. 316). Penguin Publishing Group. Kindle Edition.

Note that some relishes and chutneys have you boil the mixture for about an hour: even though they’ll lose some acid owing to evaporation during the cooking, they’ll still be safe (if you’re using a tested recipe) because they will have had you add enough acid at the start to allow for that loss.

Sample exceptions to the rule