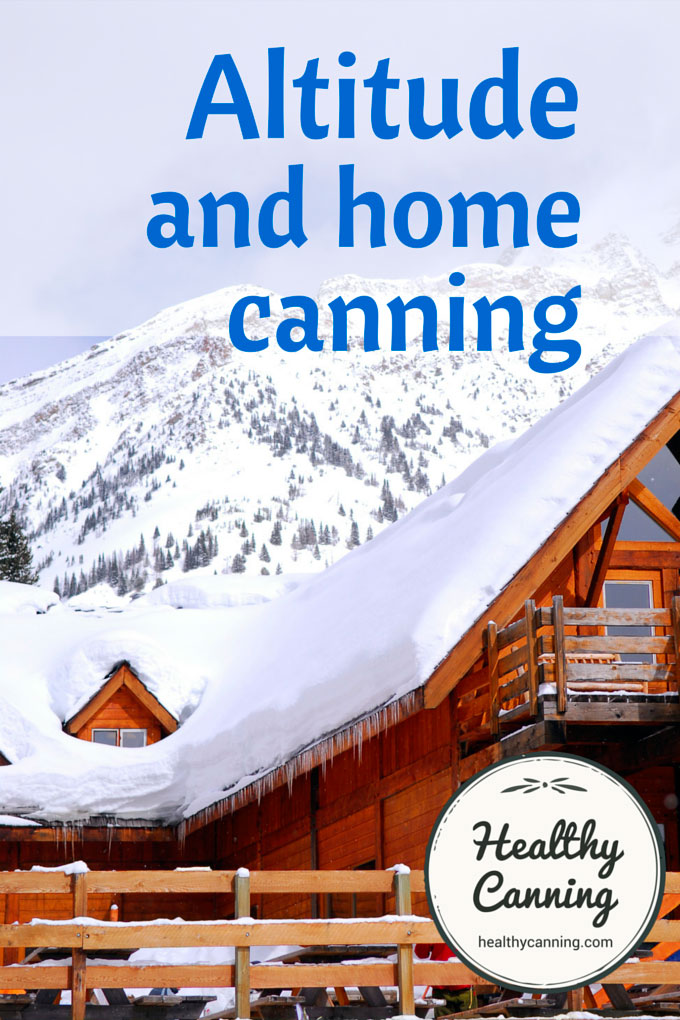 As you increase altitude at which you are doing your canning, you need to increase the length of time you water bath process (or steam can), or, if you are pressure canning, increase the pressure. This is because atmospheric pressure decreases (the atmosphere gets thinner) the higher you go up.

You can use Google maps to find your altitude. You can enter your entire address in: e.g 123 Queen Street, Upper Lower Bottom, Wisconsin, USA.

Most canning is done at “sea levels”

Interestingly, most canning is actually done at “sea levels.” But anyone who lives above that, must do the adjustments (as of 2017, we don’t know of anyone yet canning below sea levels! :

More North Americans who preserve food in some manner live below 1000 feet/305 meters—in the sea-level zone—than live higher. But there remain a great many householders who, to ensure that their home-preserved foods are safe and appetizing, must compensate for the perceptible decrease in atmospheric pressure as the altitude increases.”  [2] Hertzberg, Ruth; Greene, Janet; Vaughan, Beatrice (2010-05-25). Putting Food By: Fifth Edition (p. 11). Penguin Publishing Group. Kindle Edition.

Here’s the technical reason we care about altitude for boiling water bath processing:

When water is boiling—and by this we mean a thrashing, rolling boil—it looks the same at different altitudes but it is not boiling at the same temperature. The temperature is different because the blanket of air around us, called atmospheric pressure, is lighter when we live higher; and the lighter the air the lower the boiling point of water. At sea level our blanket of air weighs 14.7 pounds per square inch (psi), but at 10,000 feet/3048 meters the atmospheric pressure is only 10.1 psi; this [is a] difference of 4.6 psi….. water boils at lower temperatures the higher we go above sea level—and therefore is less effective as a destroyer of micro-organisms with every increase in altitude”  [3] Hertzberg, Ruth; Greene, Janet; Vaughan, Beatrice (2010-05-25). Putting Food By: Fifth Edition (p. 12, 15). Penguin Publishing Group. Kindle Edition.

The Putting Food By authors say this about altitude and pressure canning:

To summarize, if using a dial-gauge Pressure Canner, the pressure in the canner must be increased by 1 pound of pressure for each 2000 feet above sea level in order to reach the required temperature of 240 F/116 C. If using a weighted-gauge canner, the 15-pound weight must be used at all altitudes above 1000 feet in order to reach the required temperature. Although it has been accepted wisdom in the Canadian and American Rockies to add processing time to 15-psig instructions, additional time is not necessary if the pressure of the canner is adequately adjusted.”  [4] Hertzberg, Ruth; Greene, Janet; Vaughan, Beatrice (2010-05-25). Putting Food By: Fifth Edition (p. 14). Penguin Publishing Group. Kindle Edition.

Jelly-making and cooking syrups for candy and cake frosting are affected by lowered boiling points as you go higher. What happens is that water in the juice/syrup evaporates faster as the altitude increases. So if you are counting on the jelly stage being reached at 8 F/4.4 C above the boiling point of water at sea level—or a reading of 220 F/104.4 C—you’d have some mighty stiff jelly. To deal with this, Dr. Pat Kendall of Colorado State University Extension (Fort Collins) says to lower the final cooking temperature by around 2 F/ 1.1 C for each 1000 ft/305 m in elevation. In short, in Fahrenheit, then, the temperature would be 218 at 2000 feet, 216 at 3000, 214 at 4000, and so on.”  [5] Hertzberg, Ruth; Greene, Janet; Vaughan, Beatrice (2010-05-25). Putting Food By: Fifth Edition (p. 16). Penguin Publishing Group. Kindle Edition.

Jelly at High Altitude: The Sheet Test is likely to be especially helpful if you live at 3500 ft/1067 m or more, because, since jelly boils at a lower temperature than it would in the sea-level zone, the result of the boiling is the important thing—not what the temperature was that brought it to the point of sheeting.”  [6] Hertzberg, Ruth; Greene, Janet; Vaughan, Beatrice (2010-05-25). Putting Food By: Fifth Edition (pp. 285-286). Penguin Publishing Group. Kindle Edition.

Candy thermometers won’t be as accurate above 300 metres (1000 feet), which is another reason to use the old-fashioned ‘sheet test’:

Jellies will reach the gelling stage quicker at high altitudes, and a candy thermometer will not give you an accurate read on when they are ready. At sea level, a reading of 220 F/104.4 C is a semi-reliable way to test for the gel point. Above 1000 feet, that would give you more of a solid paste than a jelly. The sheet test is a more reliable method at high altitudes.”  [7] Meredith, Leda. High Altitude Canning. Accessed March 2015 at https://foodpreservation.about.com/od/Canning/a/High-Altitude-Canning.htm

If you are blanching something (as part of prep for canning) above 300 metres (1000 feet), the Putting Food By authors feel that regular blanching in boiling water is more reliable than steam blanching:

The Putting Food By authors also seem to suggest that that headspace allowance should be made for altitude (the USDA does not suggest or require it):

Remember that gas (steam) expands more at higher altitudes, so we allow extra room for it inside our canning jars. This is called headroom, and it’s shown in General Steps in Canning, in Chapter 6. If we did not increase headroom, the contents of the jars would erupt out between the lid and the sealing rim. Bad business…..  steam in the headroom expands more at high altitudes than it does in the sea-level zone (1000 feet/305 meters), so we suggest that you increase headroom by ⅛ inch for every 1000 ft/305 m above the sea-level zone, but not to exceed 1¾ inches for quarts, 1 inch for pints, and ¾ inch for ½-pints. Also, Pressure-processing has steam at a higher temperature than a B–W Bath does, and steam expands more when it’s hotter. All of which means that you should be prepared to make your own arithmetical adjustments if you live at, say 7000 ft/2134 m, and process at 15 psig.  [9] Hertzberg, Ruth; Greene, Janet; Vaughan, Beatrice (2010-05-25). Putting Food By: Fifth Edition (p. 15, 75). Penguin Publishing Group. Kindle Edition.

No steam canning for longer than 45 minutes

If altitude adjustments would require a particular food product / jar size to be processed for longer than 45 minutes, then you cannot do it in a steam canner, simply because of technical limitations: the basic steam canners that many people buy don’t hold enough water to generate steam for longer than that (though the multi-canner steam canners do hold more water, negating that argument.)  You’ll need to water bath instead. (For something like plain tomato products or plain fruit products, you could also consider pressure canning, with pressure adjusted for altitude.)

Colorado Extension, as you would expect, has a great deal of experience with canning at high altitude.

Putting Food By goes into great detail about canning at altitude, even to its impact on simmering items before canning. Searchable Kindle editions allow you to quickly scan all the very many places in the book where the topic of altitude is covered. [Note: this is not a blanket endorsement of the book.] 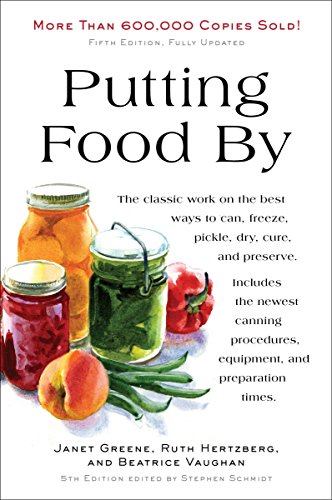