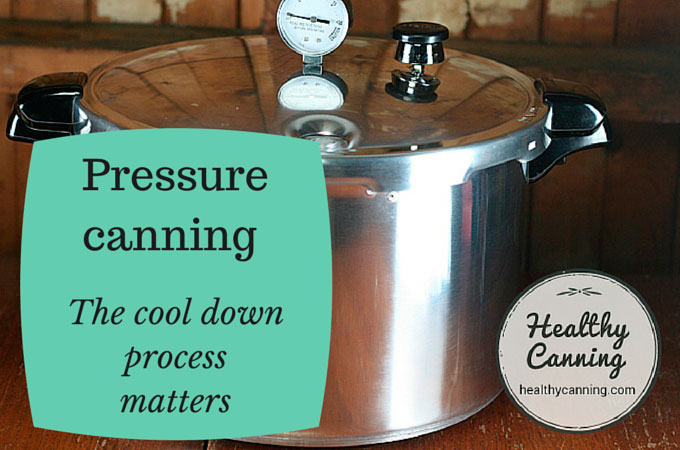 Don’t try to rush the cool down period after a pressure canning session. It’s actually vital for both food safety and food quality.

You can remove the canner from the burner and slide it over to another burner, if you can do so without throwing your back out, or scratching the stove top all to heck, but that’s the extent of it. Don’t jiggle the jiggler to get the steam to release faster; don’t pour cold water or put a wet blanket on it; don’t sit the canner in a bank of snow or sink of cold water. Even if the day is fast advancing and you have another load to force through the canner, you just have to wait and let nature take its course and let the cool down happen on its own.

Compromising the natural cool down process will invalidate all the safe processing you just did. It’s actually a vital part of the process.

USDA process times rely on a combination of heat from the time the canner is coming to pressure, during the actual process time, and then during the early stages of cooling the canner and jars. Even after the heat is turned off under the canner, at the end of the recommended process time, the food remains at high enough temperatures for another period of time that can still contribute to killing of bacteria. This retained heat while the canner has to cool naturally to 0 pounds pressure before opening is used to advantage in calculating the total sterilizing value of the process to preserve some food quality….  if anything is done to shorten the cooling period, including using a very small cooker or force-cooling the canner, then the food could cool down more quickly than expected, and be under-processed….Bacteria are not killed in the food only during the process time; the time it takes the canner to come up to pressure, the process time, and the cool-down time all matter.”  [2] Christian, Kacey. Can I Can in a Multi-Cooker? Preserving Food at Home Blog. 11 November 2014. Accessed March 2015 at https://preservingfoodathome.com/2014/11/25/can-i-can-in-a-multi-cooker/

The Bureau of Human Nutrition and Home Economics, as it was now known, did find, after collecting heat penetration data and calculating theoretical processes, that their pressure process schedules could be shortened by 25 to 50 percent for some vegetables (USDA, 1946c). This was due in part to recognition and verification of the sterilizing value during cooling. For vegetables in glass pint jars, for example, the research showed that, on the average, 50 percent of the lethality occurs during the gradual cooling in the canner. The research also resulted in lengthening process times for a few vegetables in quart jars. The processing temperature for meats was reduced from 250F to 240F. ”  [3] Andress, Elizabeth L and Gerald Kuhn. Critical Review of Home Preservation Literature and Current Research. Athens, GA: University of Georgia, Cooperative Extension Service. 1998. https://nchfp.uga.edu/publications/usda/review/earlyhis.htm

One thing we did document out of that, was that for all sizes of those cookers and canners, most of the lethality, or the sterilizing value of the canning process, is acquired during cooling of the canner, so after the process time starts (Ed: stops?), we want to make sure that people don’t do anything to reduce that cooling period too much. [4]Andress, Elizabeth. “History, Science and Current Practice in Home Food Preservation.” Webinar. 27 February 2013. [27:04] Accessed January 2015 at https://nchfp.uga.edu/multimedia/video/nchfp.wmv

Note this is not to say that the lethality (killing of the nasties) is occurring at the lower temperatures such as are experienced during cool down. So don’t conclude that it’s okay to only heat something up to lower temperatures. It’s saying that the killing is occurring during the climb down from the extreme high temperatures that were first reached. So it’s still vital to reach recommended processing pressures for the recommended length of time.

There’s also a quality factor: rushing cool down can cause food to spurt out of the jars, resulting in loss of liquid inside the jars, and seal failures. You could also warp your canner.

Note: don’t be tempted to just turn the stove off after the processing time has elapsed, and leave your jars in the canner overnight. You run the risk of flat sour.