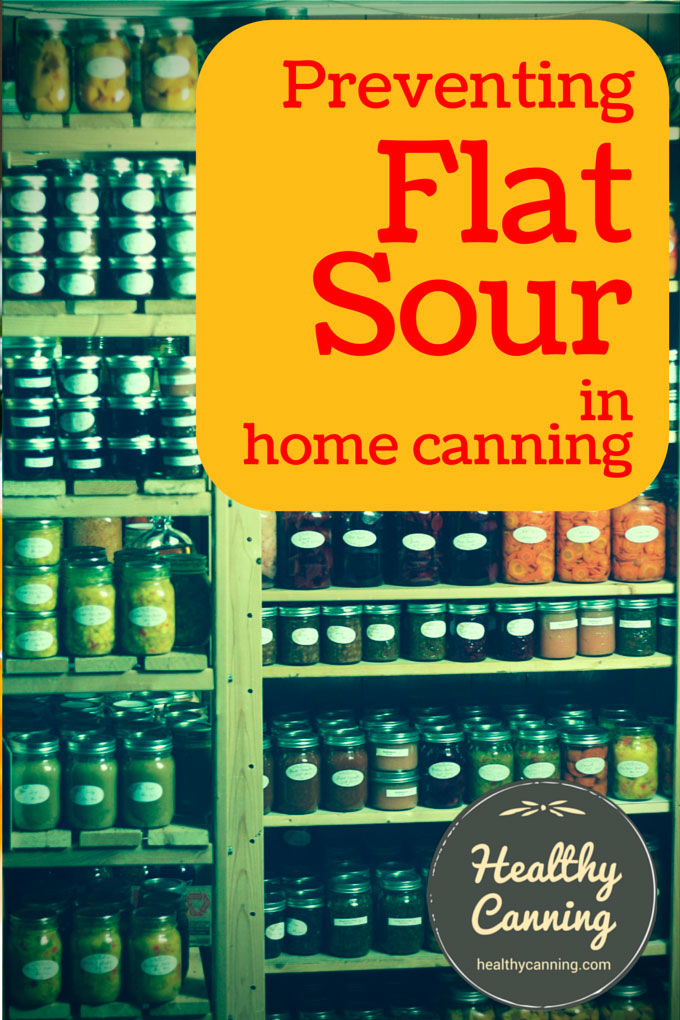 Flat sour is an unappealing off-flavour that canned goods, home or commercial, can develop.

It’s caused by keeping jars of just-processed food warm too long after processing, either by keeping them in the canner, or by covering them with a towel, etc.

There are thus two extremes to avoid with cooling jars:

(a) setting them in a cold draft that will cause them to cool too fast, which will affect the seal;

(b) doing something to cause them to hover in a warm zone after processing, which could cause flat sour.

What is flat sour?

Flat sour is an unappealing off-flavour that canned goods, home or commerical, can develop. It was studied as early as 1937 by a researcher named Barlow: “[Barlow] also described several causes of flat sours and recognized that the flat sour may be caused by more than one organism.”  [1] Bitting, Arvill Wayne. 1937. “Appertizing or the art of canning; its history and development.” The Trade Pressroom, San Francisco, CA.

It is caused by some microorganisms that survive the canning process. They are referred to as thermophilic (aka “heat loving”). The actual bacteria that cause it can include (depending on the food product) strains of Bacillus stearothermophilus, Bacillus licheniformis, Bacillus coagulans, Bacillus macerans, and Bacillus subtilis.  [2] Kalogridou-Vassiliadou, D. Biochemical activities of Bacillus species isolated from flat sour evaporated milk. J Dairy Sci. 1992 Oct;75(10):2681-6. https://www.ncbi.nlm.nih.gov/pubmed/1430475

They are harmless with regard to food safety, but they cause the food to ferment in a way that produces a sour off-taste and smell without producing any gas. Metal cans will not bulge, nor will lids pop off of jars as there is no gas to cause that.

It is described as sour because of the taste and smell, and flat because it doesn’t produce gas that could bulge or blow the lid .

It occurs particularly with peas, corn and tomatoes (either whole, crushed or juiced tomatoes.)

It occurs when processed jars are kept in a warm state for too long after processing. “Flat Sour develops at two ranges in temperature, the lower from 70 to 90 Fahrenheit (21 to 32 C) and the higher 140 to 159 Fahrenheit (60 to 70 C.)”  [4] Cameron, Janet L. and Mary L. Thompson. Home Bulletin No. 128. Blacksburg, Virginia: Virginia Agricultural Extension Service. Revised June 1944. Page 5. Access March 2015 at https://scholar.lib.vt.edu/faculty_archives/cameron/canning_for_the_home.pdf

Barbara Lund in Microbiological Safety and Quality of Food says,

In A Complete Course in Canning and Related Processes Susan Featherstone says,

Geobacillus stearothermophilus (used to be Bacillus stearothermophilus) … is a thermophile [Ed: heat lover] and is widely distributed in soil, hot springs, and ocean sediment and is a cause of spoilage of in food products by producing various organic acids. No gas is formed and it products ‘flat sour’ spoilage in canned foods. It will grow within a temperature range of 30-75 C but optimally at 55 C. Spores of G. stearothermophilus may enter a cannery in soil, on raw foods, and in ingredients such as spices, sugar, soya meal, flour and starches…Their presence in some processed containers of commercially sterile low-acid foods may be considered normal and not of particular concern because, although G. stearothermophilus can grow at temperatures as low as 30-45 C, the spores will not develop if the product is stored at temperatures below 43 C.

Bacillus coagulans is a termoduric and acid-tolerant bacterium that has been isolated from canned tomato products, where it causes a reduction in the pH of spoilt products by acid production without CO2 formation…. Optimal growth is between 37 and 45 C and at pH levels between 5.0 and 7.0. Bacillus coagulans is not as heat resistant as G. stearothermophilus but can grow at lower pH values (e.g. down to pH 4.2.)  [6] Featherstone, Susan, ed. A Complete Course in Canning and Related Processes: Vol 2. Sawston, Cambridge, UK: Woodhead Publishing. 14th edition. 2015. Pp 17-18.

The Kerr canning manual had this information:

Do all types of spoilage cause the seal on the jar to release? No. Flat sour is an exception and ordinarily shows no indication of spoilage until the jar is opened…”  [7] Answers to your canning questions. Kerr.  Question 106, page 52. 1948. Accessed March 2015.

At home, you can create conditions for flat sour to develop by leaving your jars in the canner too long after processing (either water bath or pressure canning), or, do something deliberately to slow down the cooling, such as cramming the hot jars right next to each other on the counter, and / or covering them with a towel.

How can you avoid flat sour?

Do leave your jars in the canner for 5 to 10 minutes after water bath processing, or 10 to 20 minutes after the pressure has gone away in your pressure canner (opinions vary amongst the experts as to the exact rest time that is best), as per current recommendations to give the jars time to rest and calm down a bit after processing, but do not leave them in for hours after that if you can help it.

Processed food should cool quickly. Jars should be removed from cooker or water bath as soon as processing is complete. Avoid a draft but do not cover with a cloth.”  [8] McClelland, Bessie E. Causes And Prevention of Spoilage In Home Canned Food. Bulletin (Montana Extension Service in Agriculture and Home Economics); 234. 1945-07-01. Page 5.

Cooling too slowly after removing from canner. (Example: stacked jars close together.) There is a group of harmless organisms called thermophiles that can survive canning. If bottles are held hot for long periods, they can produce acid (fermentation). This results in the defect known as “flat-sour.” This is harmless, but produces an undesirable flavor.”  [9] Riggs, Kathleen. Avoiding Common (Major and Minor) Canning Mistakes. Utah State Cooperative Extension. March 2009. FN/Food Preservation/2009-01. Accessed July 2015

Flat sour, a type of food spoilage, is caused by canning overripe food or allowing precooked foods to stand in jar too long before processing. It may be prevented by using fresh products and properly processing, cooling, and storing. Flat sour shows no indication of spoilage until jar is opened.”  [10] Presto Pressure Canner and Cooker, 23 quart model 01781, #72-719F. 2014.   p 6

So Easy to Preserve says,

Do not leave the canner unopened to cool completely, or the food inside could begin to spoil…” [11]Andress, Elizabeth L. and Judy A. Harrison. So Easy to Preserve. University of Georgia Cooperative Extension. Bulletin 989. Sixth Edition. 2014. Page 32.

You can view a brief discussion of flat sour here:

What is the maximum time you can leave something in a canner? A blogger, Susan, who writes under the name “imstillworkin” says three hours is the maximum time, but she doesn’t give a source for that information and didn’t respond to queries.

Previously, it was thought that allowing produce to heat up before processing or sitting in jars before processing was one of the causes of of flat sour.  Now the pre-concern is less about that, or not at all it seems, but more about reducing the bacterial load going into the process:

The Putting Food By people say,

Canned tomato juice is noted for encouraging growth of the highly heat-resistant bacillus that causes flat-sour spoilage, a sneaky and nasty-tasting condition indeed. However, even though the organism is very hard to destroy, it can be avoided quite easily: just follow carefully all the requirements for handling food in a sanitary way.”  [13] Hertzberg, Ruth; Greene, Janet; Vaughan, Beatrice (2010-05-25). Putting Food By: Fifth Edition (p. 128). Penguin Publishing Group. Kindle Edition.

In the past, there was speculation that flat sour could be caused by poor quality produce, taking too long to pack the jars, etc, but now the cause is actually known, and it occurs at the tail end of the processing: it can develop if your canned goods take too long to cool down.

The Kerr manual, for example, thought that it could be caused by pre-processing errors:

What causes flat sour? How can it be prevented? Flat sour is usually caused by canning overripe food or allowing precooked foods to stand in jars too long before processing or slow cooling of jars after processing. It may be prevented by using fresh products and properly processing, cooking and storing.”  [14] Answers to your canning questions. Kerr.  Question 105, page 52. 1948. Accessed March 2015.