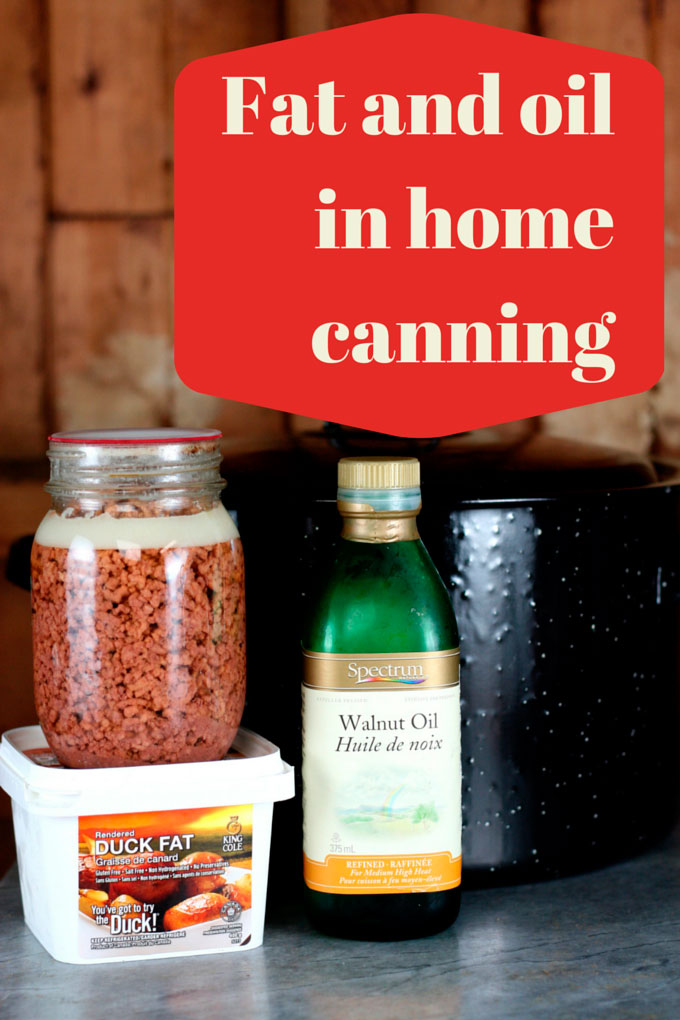 In general, you want your home canning to be as fat free as possible for technical reasons.

Fat, in canning, can:

Why is it necessary to remove as much fat from meats as possible before canning? Any fat that gets on the rim of the canning jar can prevent an airtight seal. Excess fat in jars makes it easier for the fat to climb the sides of the jar and contaminate the seal.  [1] National Center for Home Food Preservation. Canning FAQ. Accessed March 2015.

Fat left on meat will climb up the sides of a jar during processing and may prevent sealing.”  [2] Scott, Judy. Oregon State University Extension Service. Pressure cooker needed to can meat and poultry safely. News Release October 2010. Accessed March 2015.

…fats can protect spores from heat if they are in the product during a canning process.”  [4] National Center for Home Food Preservation. Canning FAQ. Accessed March 2015 at https://nchfp.uga.edu/questions/FAQ_canning.html#33

The authors of Putting Food By say,

Fat insulates against heat just as it does against cold, and the more fat there is in a food, the slower the penetration by any heat.”  [5] Hertzberg, Ruth; Greene, Janet; Vaughan, Beatrice (2010-05-25). Putting Food By: Fifth Edition (p. 48). Penguin Publishing Group. Kindle Edition.

Exceptions to the rule of thumb

That being said, as with everything, it’s not a black and white world. With any pressure canned containing meat (even the 97% lean ground beef in the jar in the photo above), a certain amount of fat is going to be in the product, no matter how lean a cut you start with, and that is fine. What is being cautioned against is an excess of fat: leaving in or adding oodles of grease to the food product.

As well, there are some “authorized” and tested recipes that require or give the option of the use of added fat in the form of an oil or actual fat.

The USDA Complete Guide to Home Canning includes three recipes that have oil in the ingredient list: marinated peppers, marinated whole mushrooms, and pickled three-bean salad. Each of these recipes includes added acid ingredients (lemon juice, vinegar) as well as preparation steps to ensure adequate acidity of the vegetable. There is a small amount of oil in each recipe and sufficient amount of acid. These recipes have been scientifically research tested for safety.”  [6] Penn State Extension. Caution: Don’t Can in Oil.   2 July 2012. Accessed January 2015.

When you are canning ground vension, the USDA and NCHFP call for you to add lard to it:

The University of Alaska Extension calls for oil to be added to some canned fish:

For halibut, add up to 4 tablespoons of vegetable or olive oil per pint jar if you wish. The canned product will seem more moist. However, the oil will increase the caloric value of the fish.” [8] van Delden, Kari. Canning the Catch. FNH-00128 . University of Alaska Fairbanks Cooperative Extension Service. Revised January 2014. Page 3.

The above examples given are for pressure canning, but there is also oil called for in some tested recipes for water-bathing from trusted sources, such as these three from the NCHFP:

So, generally, one of the things that makes home canning so low in fat is that it’s mostly all done low fat, for various technical reasons. But, when a tested recipe from a trusted source does call for adding fat or oil, then do so worry-free.

Oil is not a safe way to preserve food

In some traditions, such as Mediterranean, people preserve food by putting it in a jar and pouring oil over it. This is highly dangerous.

The concern about vegetables in oil and botulism remains current. The products are popular, home production is common and, according to Food Science Australia (2000), two false assumptions persist:

And while people in Europe will say “no one ever gets sick from doing that”, they are uninformed.

Vegetables in oil have contributed to 54% of the cases of botulism in Italy between 1992 and 1996, where approximately 40 cases per annum have been reported (Aureli et al. 1999; Squarcione et al. 1999). Other vegetable preserves have been implicated in 10% of cases. While many of the products implicated were home-prepared, a proportion was produced commercially.” [10]Barbara M. Lund and Michael W. Peck. EVALUATION OF THE RISK OF GROWTH AND TOXIN PRODUCTION BY CLOSTRIDIUM BOTULINUM IN SELECTED NEW PRODUCTS OF CONCERN. Food Safety Science Division, Institute of Food Research, Norwich Research Park, Colney, Norwich. 2000. Page 19.