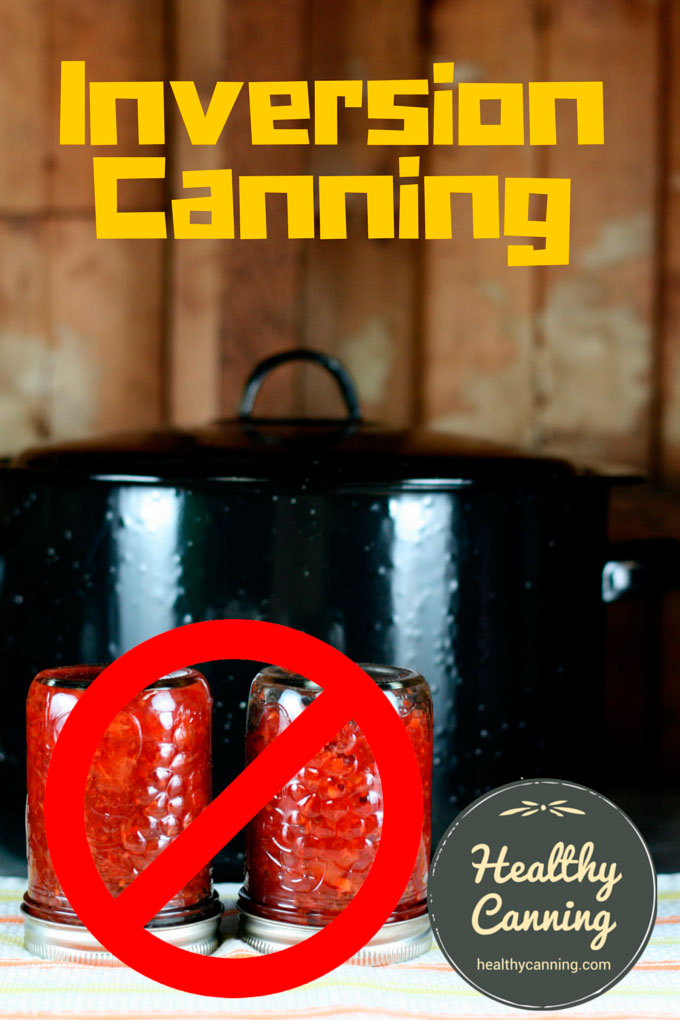 Inversion “canning” is open kettle canning with one additional step.

For the first part, open kettle canning, the food to be bottled is prepared and heated in a pot, then put the jars, after which the lids are applied. No further processing of the bottled product occurs.

With inversion “canning”, the cooling jars from step one are turned upside down while the contents inside them are cooling.

It is still not actually canning, though, because no canning process has happened. The best you can say is that the food product has been “bottled.”

Recommended up until after World War Two, both open kettle canning and inversion have now been discredited and proven unsafe and are strongly recommended against by the same authorities who first recommended them. They have changed their mind and admitted they were wrong.

People still do inversion canning, providing reasons such as the following:

What are the concerns about inversion “canning”?

Inversion “canning” will usually create a seal, though usually a far weaker and less long-lasting one than with proper processing. And, since the canned product wasn’t processed as a whole, there’s the issue of just what exactly you sealed in there along with your food. It can lead to hidden, unseen moulds which will lower the acidity level in the products in the jars which can allow botulism spores to germinate. Or, listeria and salmonella.

The authors of Putting Food By express their concerns about inversion “canning” from a quality point of view:

The technique calls for leaving only ⅛ inch of headroom, wiping the jar carefully, clapping on the disc and screwband, and immediately inverting the jar, leaving it to sit upside down for 5 minutes. It is then turned upright and allowed to continue cooling in the standard fashion. The thinking behind the inverting is that the jam/jelly—being still at a temperature to destroy spoiler micro-organisms—will sterilize the underside of the sealing disc, and the little amount of air trapped under the lid. A vacuum can form if the jars are hot and the contents are at least 165 F/74 C. But it won’t be a strong vacuum, because any amount of air left in the jar will invite growth of mold eventually—even though the jar is technically sealed. Thus, even proponents of the inversion method recommend processing jams and jellies in a Boiling–Water Bath in the South, to counteract heat and humidity of storage in the region. Also, food scientists have expressed worries over the inversion technique used at high altitudes, and they are against it. PFB once advocated the inversion method, but we reversed our own recommendations in our previous edition. We continue to be against this method today, as is the USDA. Why take the time and effort to put by preserves, only to risk having them spoil?”  [1] Hertzberg, Ruth; Greene, Janet; Vaughan, Beatrice (2010-05-25). Putting Food By: Fifth Edition (p. 287). Penguin Publishing Group. Kindle Edition.

Many ordinary people express their concerns from a safety point of view:

I simply won’t take the chance with myself, my loved ones or friends I gift my home canned foods to, by giving them home products canned with questionable outdated methods. I can’t imagine how anyone might feel that gifted that one jar that carried botulism spores not destroyed during processing. It’s just not worth it.”  [2] User Rosey. Comment posted on 11 October 2013. Accessed March 2015 at https://www.hillbillyhousewife.com/oven-canning-method.htm/comment-page-4#comment-45764

Ball recommends against it for seal quality reasons: “Do not invert. move or store jars while cooling, as this may cause seal failure.” [3]Ball Blue Book, 37th edition. Page 13. Bernardin is a little more hardcore, even, and doesn’t want you even to tilt the jars while lifting them from the canner.

Even if you do water-bath your product, or pressure-can it properly, the concern from a technical point of view about inverting the hot jar is that doing so has actually been documented to statistically to more often cause sealing failures right there and then, or, during storage on the shelf. It’s a step that hinders, rather than helps.

Elizabeth Andress, head of the National Center for Home Food Preservation, gives some good solid reasons to not invert your jars:

Some other methods of sealing jars call for inverting a closed, filled jar of hot product for anywhere from thirty seconds to one hour. (Inverting is turning the filled jar upside down on its lid.) While this inversion process can be successful in producing a sealed jar, it works best with very hot product. Individual variation in practicing this procedure or unexpected interruptions can result in delays between filling jars, getting lids screwed on, and inverting the jars. If the product cools down too much, the temperature of the product can become low enough to no longer be effective in sealing jars or preventing spoilage. When the inversion process does work, the vacuum seals of filled jars still tend to be weaker than those produced by a short boiling water canning process. A larger amount of retained oxygen in the headspace may allow some mold growth if airborne molds contaminated the surface of the product as the jar was filled and closed. More complete removal of oxygen from the headspace also offers some longer protection from undesirable color and flavor changes with some types of fruit products. A weak seal may be more likely to fail during storage….In addition, although no cases of burning have been reported in the news media, experience has shown that some people will experience leaking of the hot product from the jar when it is turned over if the lid wasn’t put on just right. If hot enough, someone could get burned. Even if it doesn’t cause burns, leaking means product is lost.”  [4] Andress, Elizabeth L. Preserving Food: Processing Jams and Jellies. University of Georgia Cooperative Extension. FDNS-E-37-1. June 2011. Accessed March 2015 at https://nchfp.uga.edu/publications/uga/uga_processing_j_j.pdf

Linda Amendt, the author of Blue Ribbon Canning, is also firmly against the practice of turning preserve jars upside down:

Jars of high-acid foods that are inverted after being filled, instead of being safely processed in a water bath, will fail to seal properly. Inverting the jars is an old-fashioned and unsafe method that is, unfortunately, still recommended in many current home-canning cookbooks. It was once thought that inverting jars of high-acid foods would create a vacuum in the jars and cause the lids to seal and that this was an acceptable alternative to water bath processing the jars. This theory has been proven to be false and can lead to serious contamination of the food. Instead of inverting the jars, they should always be processed in a water bath canner to ensure a tight seal.

Inverting jars immediately after water bath processing in an attempt to redistribute floating fruit in jars of marmalades or preserves is not a good idea and is strongly discouraged. The soft spread can be forced between the rim of the jar and the lid, causing the seal to fail. Also, food that sticks to the inside of the lid will impair the headspace, causing air pockets in the jar and preventing the jar from sealing properly…. It can also encourage spoilage after the jar has been opened. Never invert jars after filling or processing.” [5]Amendt, Linda J. Blue Ribbon Preserves: Secrets to Award-Winning Jams, Jellies, Marmalades and More. New York: Penguin. 2001. pp 57 to 58. 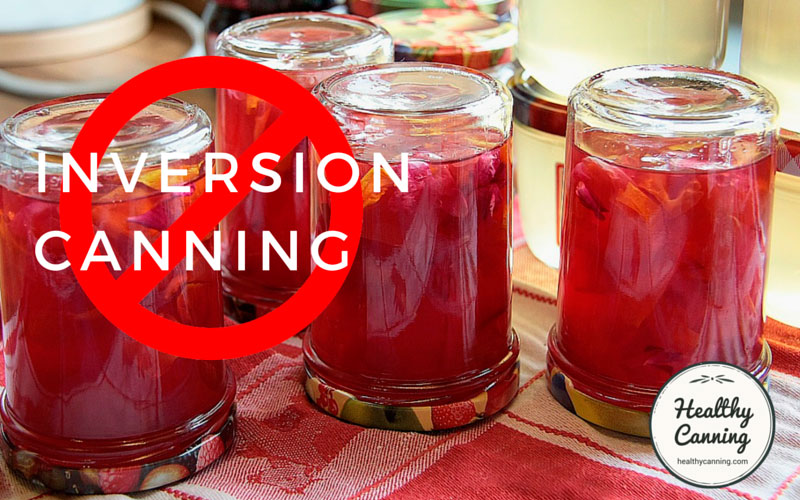 North Carolina Extension Service advocated the method in 1941 (though combined with a boiling water bath):

When the water begins to boil, count time. Consult the recipe, noting the exact number of minutes, and never cut this time short. Have a clock handy and do not guess at time. Leave the jars lightly sealed during the whole processing, and when the time is up, remove one at a time from the canner, seal tightly, turn jars upside down, and set aside. After screw top jars cool, do not tighten tops again as the seal will be broken and contents will spoil.”   [6] McKimmon, Jane S. and Cornelia C. Morris. Simplified Methods for Home and Community Canning. North Carolina Agricultural Extension Service. Pamphlet #39. March 1941.

The self-sealing, two-piece mason jar lid and canning ring we use today was invented by the Kerr company. In 1941, they were advising against turning jars upside down after canning. They were opposed to it for seal-quality reasons. 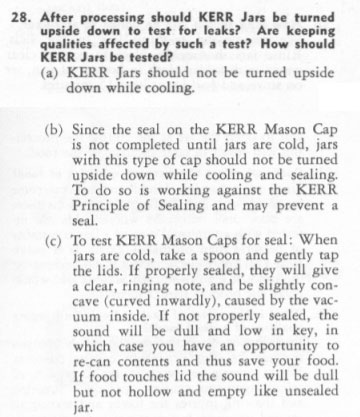 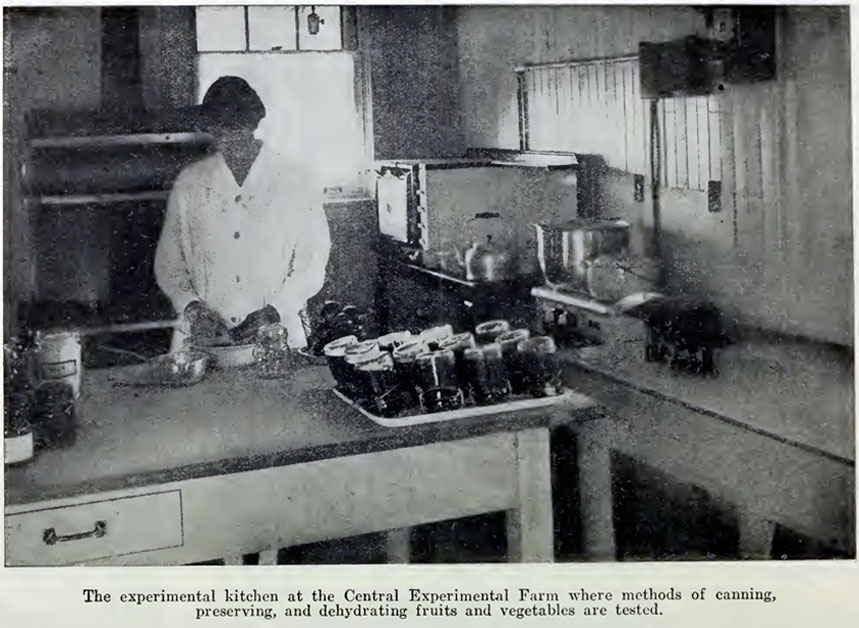