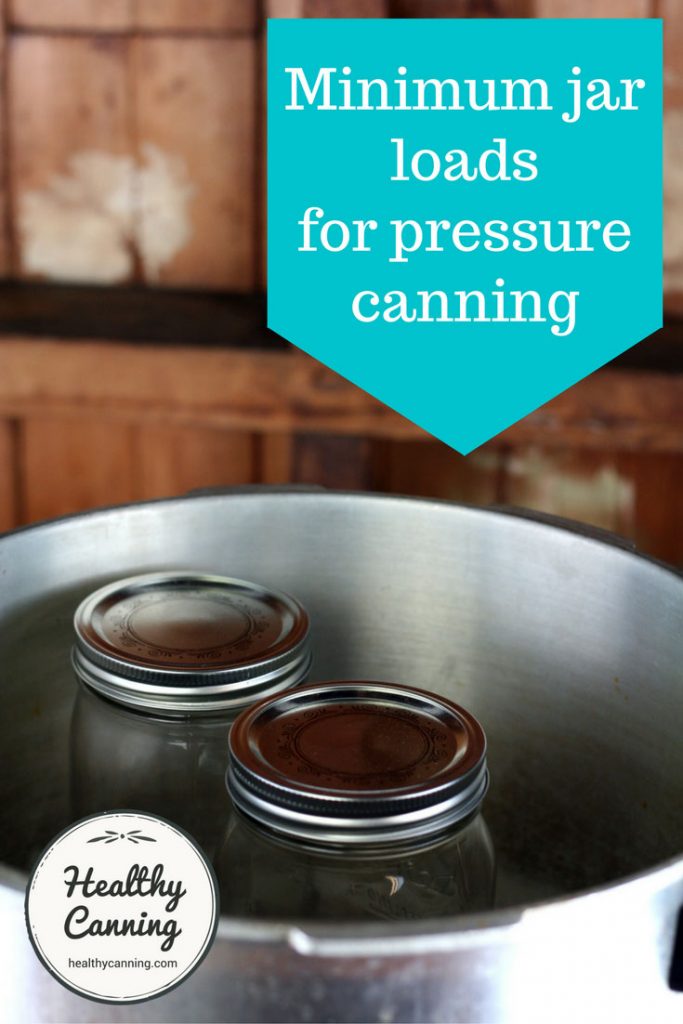 To be clear, this applies to pressure canning, and not water-bath (or steam) canning, and, this advice is coming from Ball only at this time.

Minimum number of jars in your pressure canner at one time

The rule they give is that a pressure canner load must consist of at least 2 quart (litre) jars OR 4 pint (half-litre) jars.

To ensure proper pressure and temperature is achieved for safe processing, you must process at least 2 quart or 4 pint jars in the pressure canner at one time.” [1]Butcher, Meredith L., Ed. The All New Ball Book of Canning and Preserving. New York: Oxmoor House. 2016. Page 274.

The advice appears in the All New Ball Book of Canning and Preserving, 2016, page 274.

This guidance appears to be new.  A search of 500 other current and historical home canning publications returned no similar previous advice. 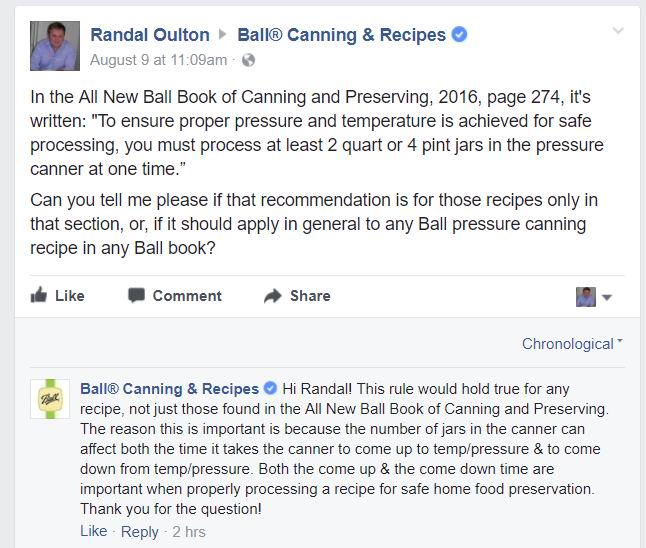 A reader asked us if it would be fine using smaller jars to make up the minimum jar load volume requirement. For instance, 8 half-pints instead of 4 pints or 2 quarts (8 quarter-litres instead of 4 half-litres or 2 litres).

Ball said yes, that is fine. The minimum load is 2 quarts / litres, and you can configure that with whatever jar sizes you need to, to make up that overall minimum volume requirement. 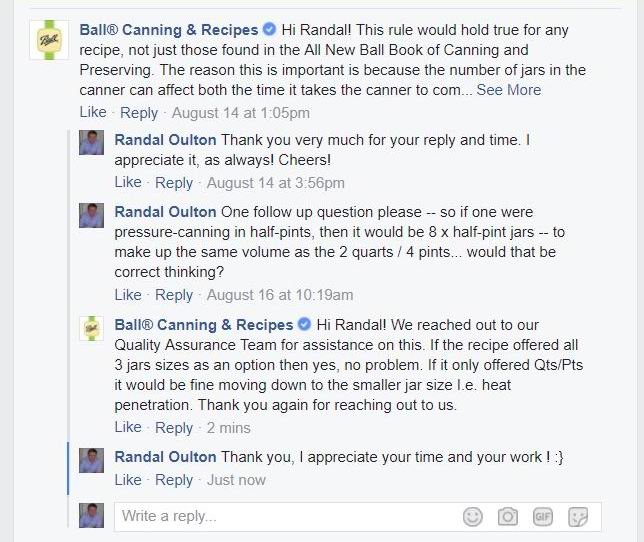 The advice would appear to underline just how much importance is placed on the warm-up and cool-down times in pressure canners.

The National Center for Home Food Preservation is leery of some out-door gas burners, as they run extremely hot and could shorten the heating-up times too much:

Higher BTU burners could also produce so much heat that the recommended come-up time for canning could be altered, potentially producing an unsafe final product. ”  [3] National Center for Home Food Preservation: Can I can on portable gas or electric burners? March 2014. Accessed March 2015.

The National Center also warns against rushing the cool-down times, because the technicians who developed the tested processing times, rather than burn extra cooking fuel by extending processing times, instead counted on the cool down times for additional sterilization.

Similarly, everyone will have noticed that a fully-loaded pressure canner takes longer to heat up than a lightly-load one, and longer to cool down.

The rule would appear to be designed to help ensure that heat-up and cool-down times aren’t too short. 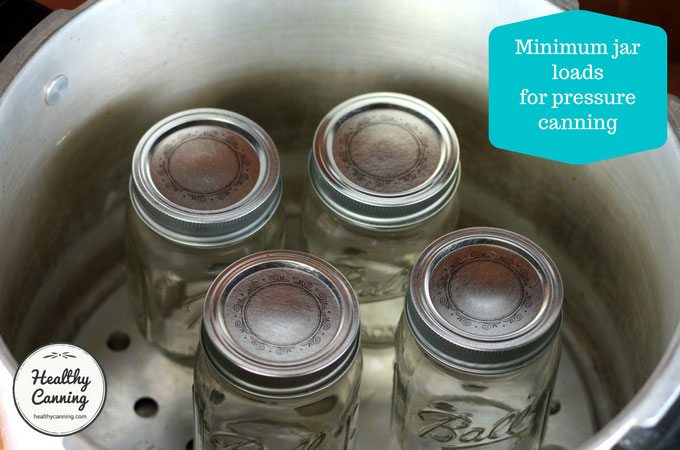 If you are processing half-litre / pint jars, the minimum load recommended now by Ball is 4 jars.

Advice from other sources

The National Center for Home Food Preservation does not appear to have a view on minimum canner load, as of summer 2016.

Their advice instead remains that of the USDA, which since the first edition of the Complete Guide in 1988 is focussed on the minimum size of the actual canning pot:

The minimum volume of canner that can be used is one that will hold 4 quart jars sitting upright on the rack.” [4] United States Department of Agriculture (USDA). Complete guide to home canning. Agriculture information bulletin No. 539. 2015. Page 1-35.

Both the All-American and Presto manuals cover maximum load, but are silent about minimum load.

The Mirro manual does mention this: “Add extra pint (ed: half-litre) of water to canner if processing less than full capacity.” (The other canner manuals do not suggest that.) [5]Mirro Pressure Cooker & Canners Instructions Manual & Recipe Book. Undated. Page 36. 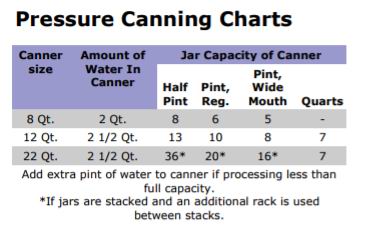 Up till now, home canning books have assumed that everyone wanted to can enough food to get the Waltons through the depression, and so recipe yields are designed to be very high. The focus was always on how much could be crammed into a canner load and still get the lid shut. 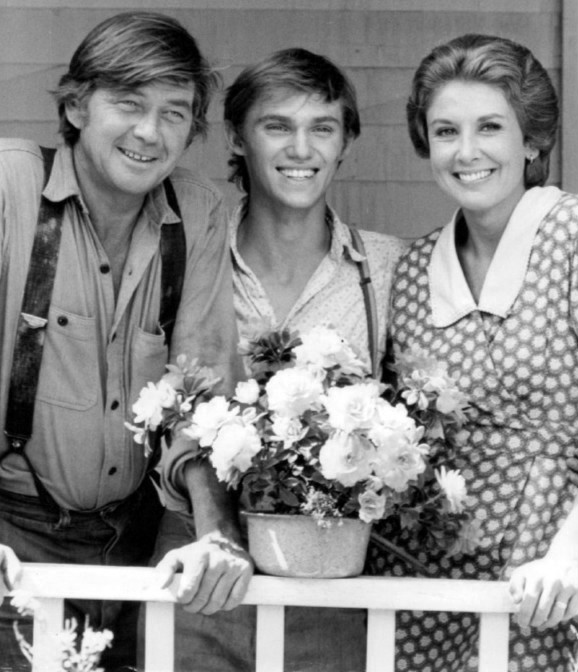 In today’s reality, however, households are far smaller, and consequently today’s home canners want to do smaller batches of canning.

This guidance about just how small a smaller load can be, and still meet existing processing recommendations, is likely a reflection of that.

And, this is Ball’s advice. No such guidance has been issued by the USDA, or any Cooperative Extension, or the National Center, yet that we know of.

And, you can look at it this way: it’s great news if you’re feeling guilty about being too lazy to re-process that one jar that didn’t seal the first time around — now you can say, Ball at least is telling me not to! 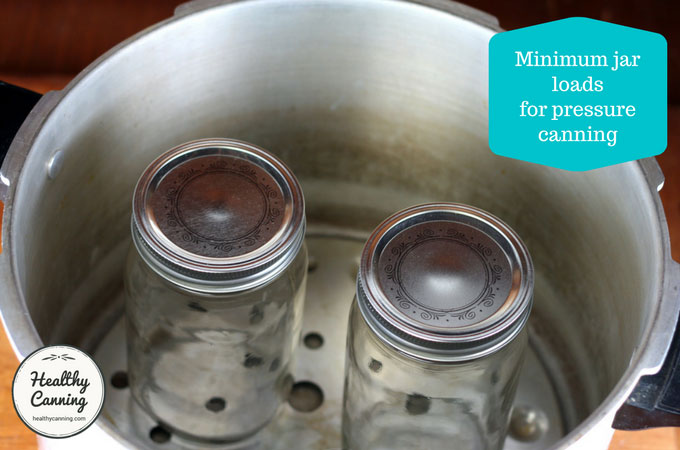 If you are processing litre / quart jars, the minimum load recommended now by Ball is 2 jars.