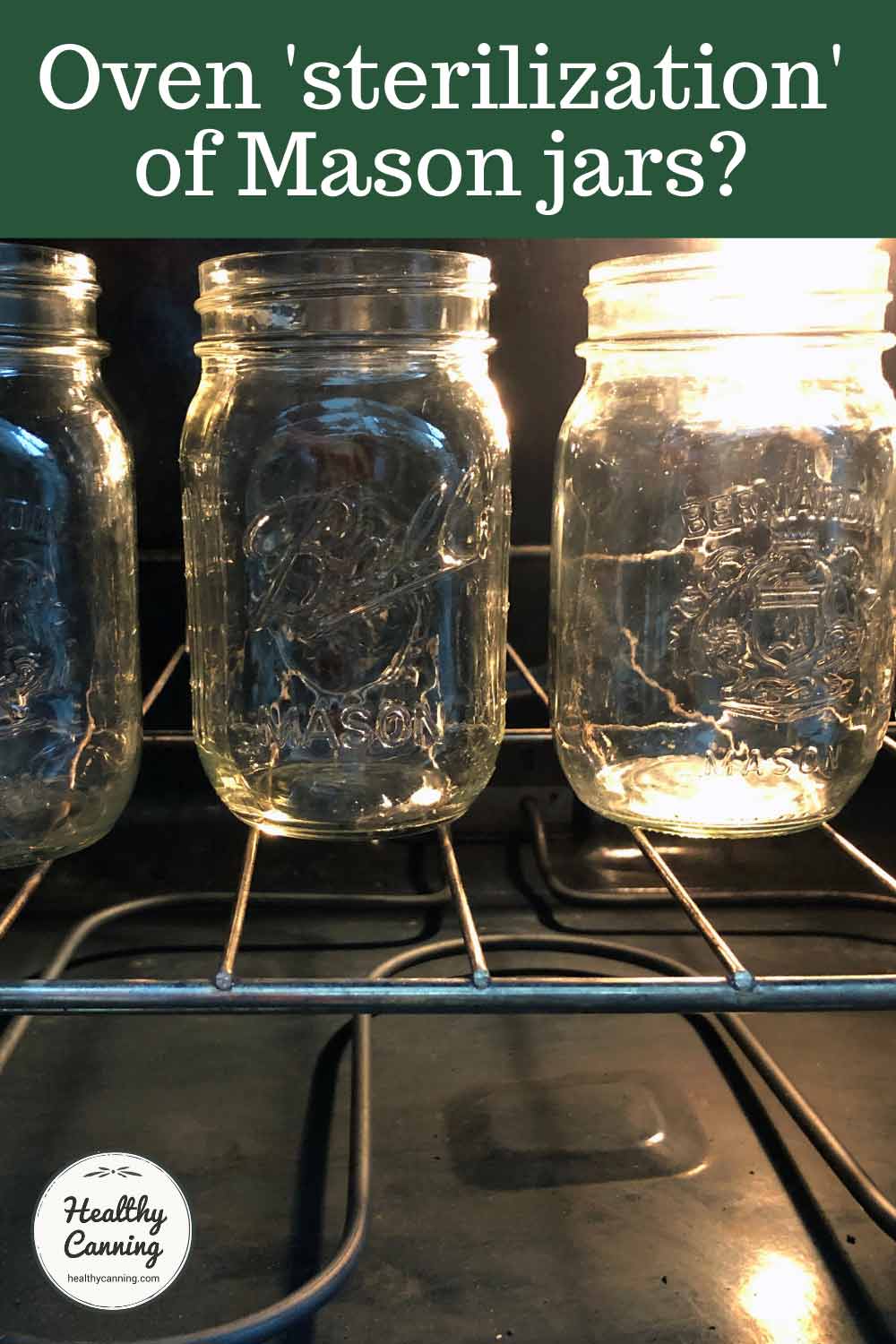 All food safety authorities advise against attempting oven sterilization of home canning jars on grounds of both biological and physical safety. Anyone who gives you directions for doing so is not only just guessing wildly at times and temperatures to be required, they are also assuming liability by going against advice from food safety authorities.

There are a few issues that make this an invalid process.

Note: Most people, most of the time, do not need to be sterilizing canning jars in any way, shape or form anyway: for the take-away from this page, just jump down to here.

The first factor to consider is that the kind of steady, consistent, reliable heating required for sterilization just cannot be counted on in a non-laboratory oven.

All three assumptions are false.

Household ovens are just not environments capable of producing and holding exact heat.

“What makes ovens so tricky is that they aren’t exactly precision appliances. Instead, they operate on approximations and averages.” [2]Martin, Taylor. Find out if your oven is actually preheating to the right temperatures. CNET. 20 December 2015. Accessed January 2015 at https://www.cnet.com/how-to/how-to-test-your-oven-for-temperature-preheating-accuracy/

Consequently, anyone who assumes that a household oven (even with a fancy French or German name) is going to provide the kind of guaranteed, consistent temperature needed for sterilization is not taking into account the reality of home ovens.

Additional, the reality is that most of us have aging ovens, in stoves a few years old or more. There are many parts of an oven that can over time start to operate in a faulty manner. They don’t have to die entirely to affect oven performance; they can just work poorly. Bake elements can go faulty and lose effectiveness. Igniters can be slower to ignite at the right times or not at all at times, which affects their kicking in as required to restart the heating to stabilize the temperature. The temperature sensor and thermostat may have lost calibration over time. And, some ovens are just poorly insulated to start with, compared to other ovens. [4]RR Appliance Services. What is Causing an Inaccurate Oven Temperature? 8 July 2019. Accessed January 2021 at https://rrapplianceservices.com/oven-repair/what-is-causing-an-inaccurate-oven-temperature/

Note that as in all things to do with temperature where any kind of chemistry or science is involved, such as sterilization, or even baking a cake for that matter, altitude adjustments have to be made, and those advocating oven sterilization never seem to take that into account, either.

Inactivating bacteria requires certain temperatures to be reached and held for the length of time required for a given bacteria’s resistance to the heat to collapse.

For the oven unreliability covered above, the University of Maine Cooperative Extension Service says that “oven sterilization” does not adequately sterilize jars:

Bernadin, which makes mason jars for home canning, says that attempted oven sterilization is not a safe process that mason jars should be subjected to.

Note that Bernardin and Ball jars, as well as Golden Harvest jars, are all part of the same umbrella company and made in the same factories and come off the same assembly-line rollers.

In their Bernardin Guide they say:

“Sudden cooling or heating can cause thermal shock. Example… Oven sterilization (Jars heat unevenly due to dry heat waves, and temperature fluctuations inside the oven may be too drastic for the jars.)” [6] Bernardin Guide to Home Preserving. Toronto, Canada: Bernardin Ltd. 2013. Page 141.

In another place in the same book they write:

“Never sterilize, heat or process Mason jars in an oven. Glass is a poor conductor of heat and therefore heats unevenly by dry oven air. Mason jars are not “Pyrex” glass, fluctuations in oven heat can weaken them and possibly result in breakage. Heat penetration in dry oven air is not as efficient as heating… jars on a rack in boiling water or steam…” [7] Bernardin Guide to Home Preserving. Toronto, Canada: Bernardin Ltd. 2013. Page 139.

Note that they say that the glass of the jars will heat unevenly in dry air, so you have no idea if all parts of a jar actually reached let alone held the same temperature.

In another of their books, the Bernardin Complete, they write:

“While canning jars are designed to withstand high temperatures in moist environments, such as those in a canner, they are not suitable for use in the dry heat of an oven. In an oven, glass jars heat unevenly, creating hot and cold spots. ….heat clean jars on a rack in water, not in an oven.” [8]Kingry, Judi and Lauren Devine. Ball / Bernardin Complete Book of Home Preserving. Toronto: Robert Rose. 2015. Page 414.

In short, they don’t support it because physical damage may arise, whether it’s immediately visible or not, and if you try it, you’re on your own: they have no legal liability as they have warned against it.

How to sterilize your canning jars properly

If you are going to sterilize canning jars, in a home environment the only way to adequately and safely do it is in boiling water or in a steam canner (unless you just happen to have an autoclave sitting in the garage.)

How to sterilize canning jars when needed the proper way

Bear in mind, though, canning jars for anything being heat processed for 10 minutes or more do not actually require any sterilization at all, as they will be sterilized during the processing. Why spend money on the energy costs and increase your carbon footprint for something that doesn’t need doing in the first place? See: Sterilizing Canning Lids and Jars.

Also bear in mind that if your canning recipe calls for less than 10 minutes of processing (thus necessitating the jars being sterilized), you can just increase the processing time to 10 minutes.