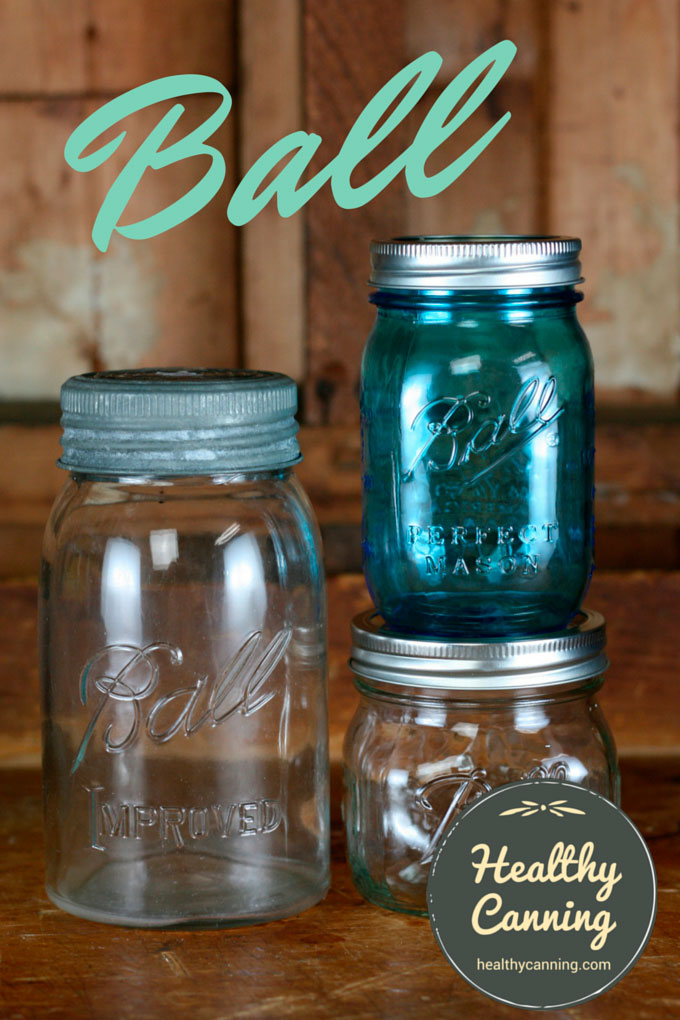 Ball is a brand of home canning supplies.

Home canning advice given by Ball is considered to be amongst the most reputable advice in the world from the private sector.

Ball puts out one of the best-known books in the field of home canning, its famous Ball Blue Book.

Where is Ball located?

The factories that produce Ball jars are largely in Indiana (where they have been since 1886.) At least some of its jars are made for it by companies such as the Ardagh Group.

The two operations are about 65 km (40 miles) apart, according to Google maps. 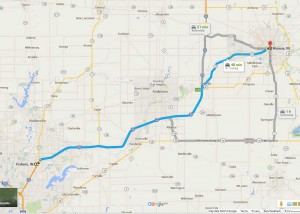 Ball company offices are in Fisher; the factories were originally in Muncie. The two are about 60 km (40 miles) apart. (Click to Enlarge). Source: Google Maps. 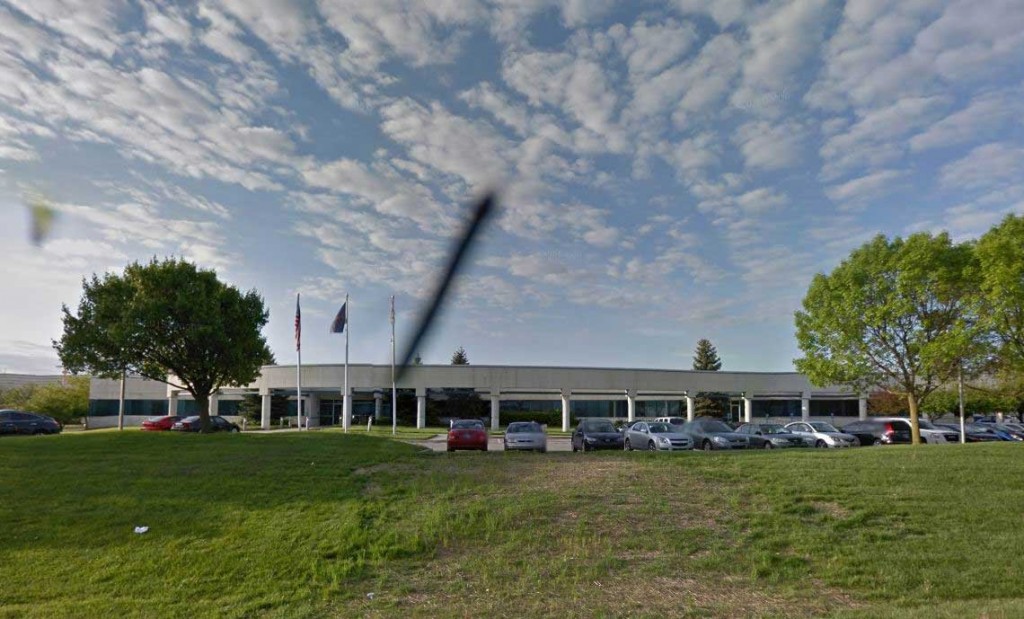 A photo of the Newell Building that Ball’s headquarters are currently in. (Click to view in Google). Source: Google Maps

Ball Home Canning is different from the Ball Corporation

For more information, see our page on Newell, the home canning giant. 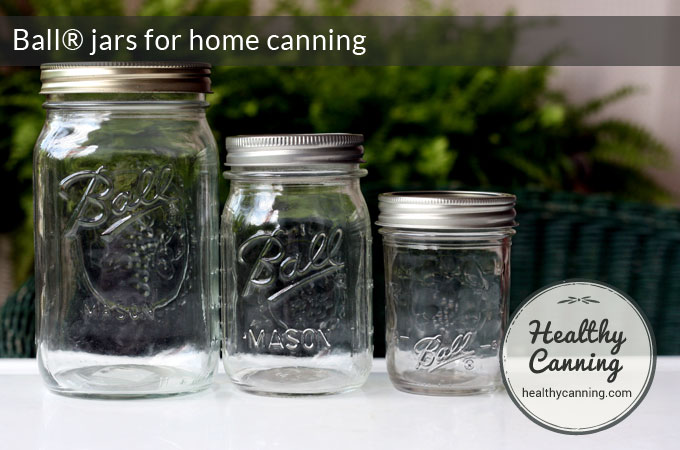 Ball Jars have had a wheat and fruit round circle on the back of them since the 1970s.  [2] “I’ve always hated the round of wheat and fruit on the back of the Ball jars (in researching this post, I learned that it’s been there since 1970).” — McLachan, Marisa. There’s a New Brand of Mason Jars in Town. Blog post 6 May 2011. Accessed March 2015 at href=”https://foodinjars.com/tag/penley-mason-jars/. 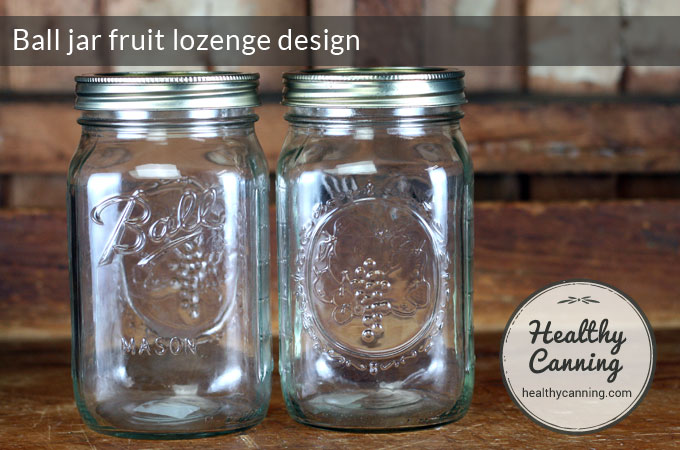 In fact, one of the minor complaints about Ball jars over the years has been how “busy” the jars are on all sides. 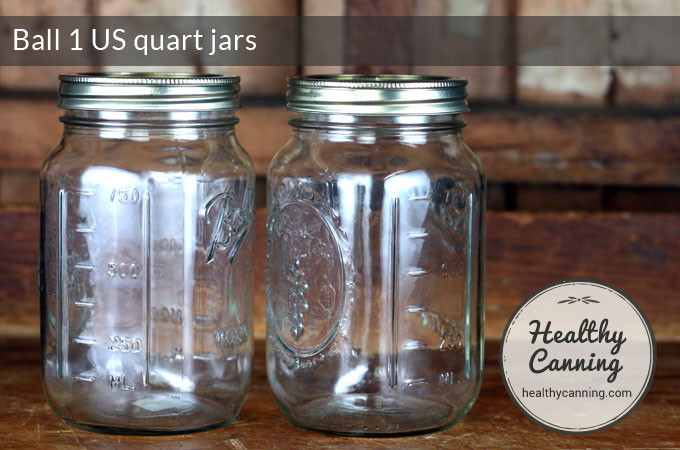 Every side of the US quart and US pint jars is imprinted with something — leaving some people exasperated at times that there are few plain, flat surfaces to stick a label onto.

Many ball jars give measurements on the side — in metric. 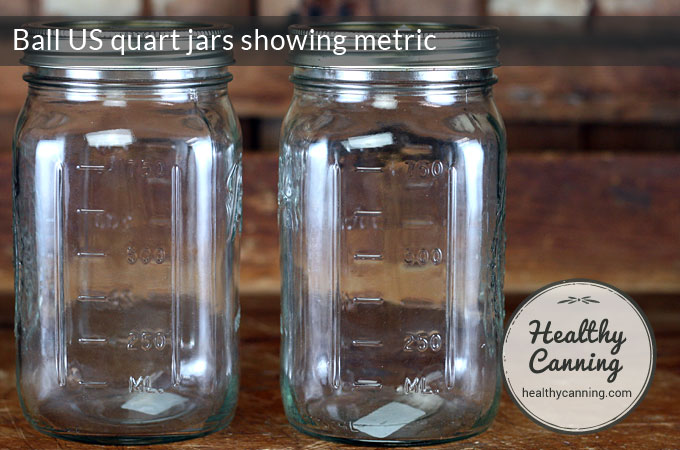 Or, they are denominated in metric – notice the Ball jar on top below that gives its volume as 500 ml. 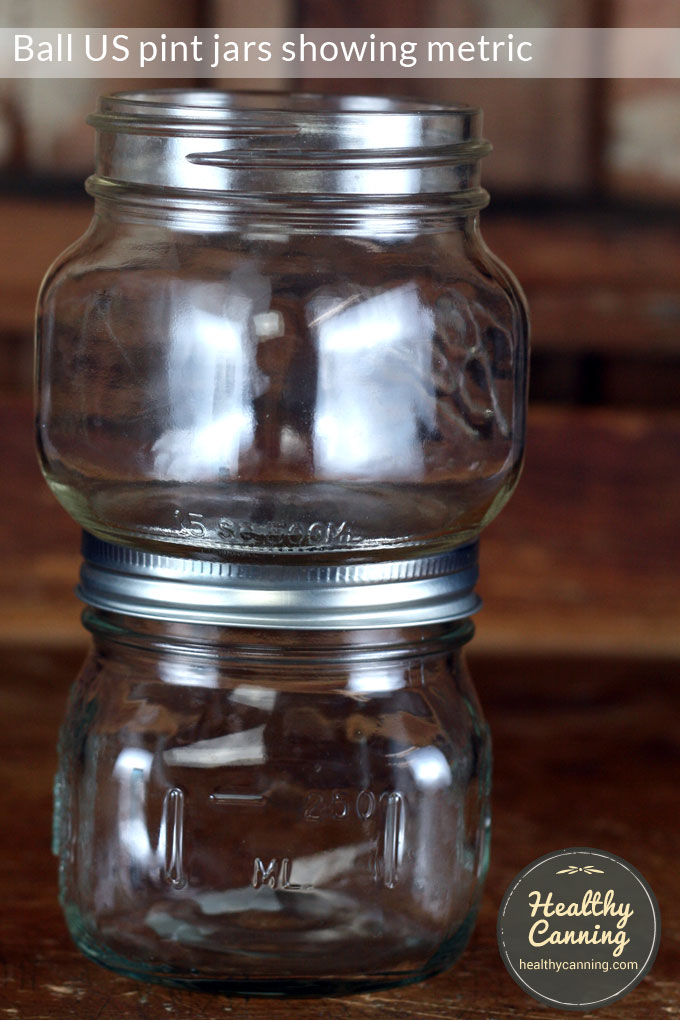 That can be an advantage though at times: 10 Ball US pint jars will fit into a Presto 16 or 23 quart canner at once; only 9 Bernardin ½ litre jars will, owing to the slightly larger size of each jar. 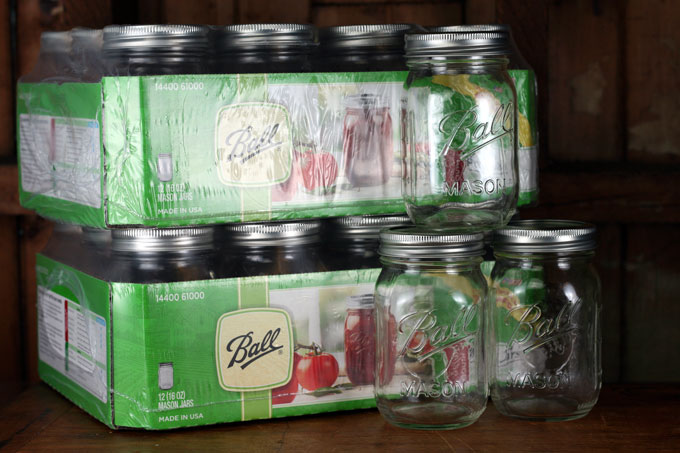 The history of Ball jars

Five brothers from Buffalo, New York, established the company that went on to become known as the Ball Corporation and to be most well known (to home canners, anyway) for its home canning products.

In 1880, Edmund and Frank started a small business making kerosene containers lined with tin. They soon switched the tin lining to glass, but when their supplier for the glass linings burnt down, they opened their own glass factory in 1882 to make the linings themselves. Since they had the glass factory anyway, they decided to make other glass products. In 1884, they discovered that the Mason jar patent had expired, which meant they could start making them, which they did. 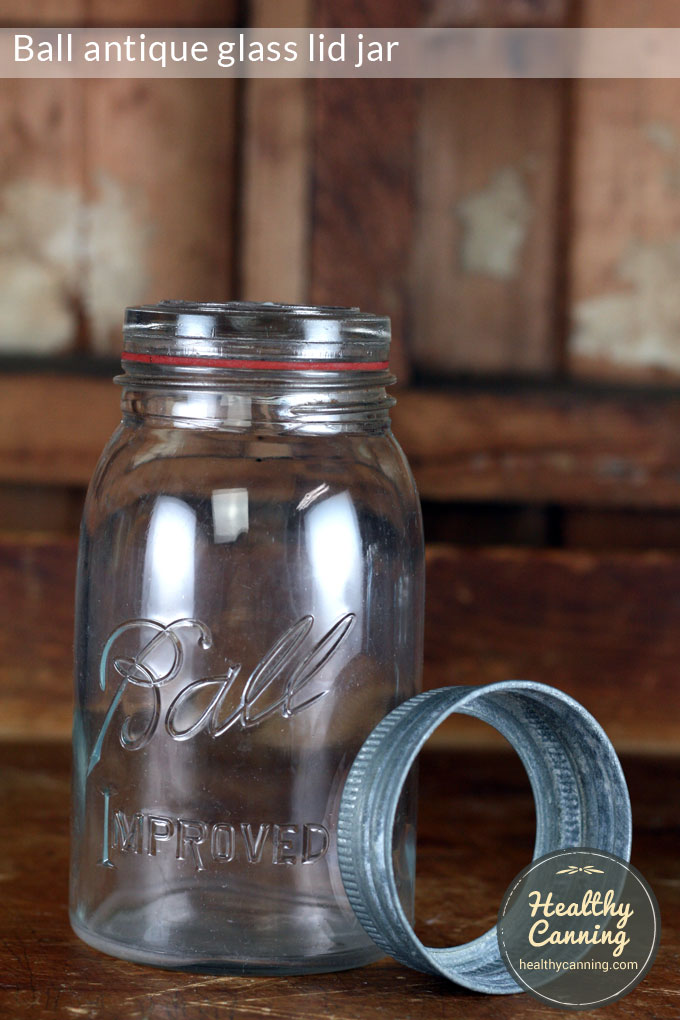 By 1886, they pressed their other brothers into service to help with the growing business, and they moved the glass part of the operation to Muncie, Indiana, lured by the city fathers there offering an attractive package including a cash subsidy, free gas, railroad connections and a good deal on the land.

In the ensuing years, the Ball corporation began expansion and acquisition of smaller companies.

In 1993, the Ball Corporation sold off the Ball Home Canning line; the corporation itself now (2016) makes other things such as recyclable metal containers and aerospace products. The Ball logo can often be seen on your favorite can of beer, but is no longer related to the Ball jars bearing the same logo being produced today.

For the history of the Ball Home Canning line since 1993, see the page on Newell. 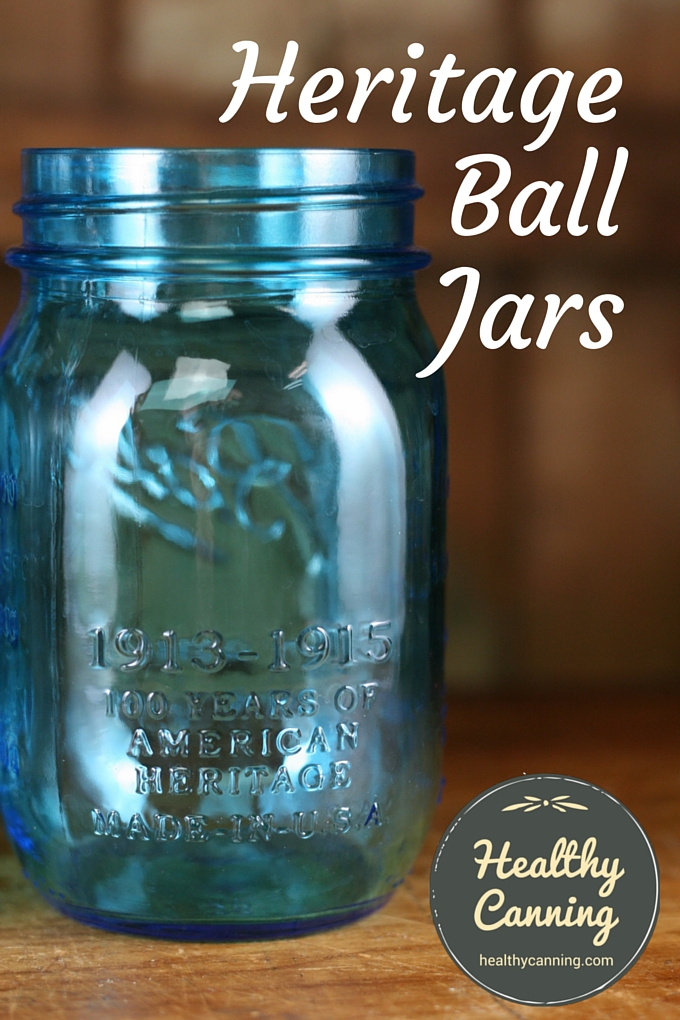 Ball has released special heritage / vintage jars in blue, green and purple.  The embossing on some of the jars says “1913 to 1915, 100 years”, which naturally people think is a mistake.

We understand why it might be confusing but those dates are correct. The jars celebrate the 100th anniversary of the period of incredible innovation that took place at Ball between the years 1913 and 1915.” [4]Ball Facebook page entry. 30 September 2015. Screen capture on file.

The same green and purple jars were also made for Newell’s Bernardin line.

The lids on the heritage jars are the standard, two-piece mason jar lids used on modern Ball jars.

The jar’s new light blue color, was devised through a collaboration with Ardagh’s supplier Ferro Glass Systems, a world leading color technology specialist. They had to reproduce a ‘retro’ version of how the jars would have looked 100 years ago, when glass containers did not have the ‘clear’ appearance of today’s products.” [6] Ardagh Group Press Release. The Perfect Mason. 3 June 2013.

On Amazon, you can see the variety of these jars, and also the household items now being made from them such as soap dispensers and spoon rests: Ball heritage jars 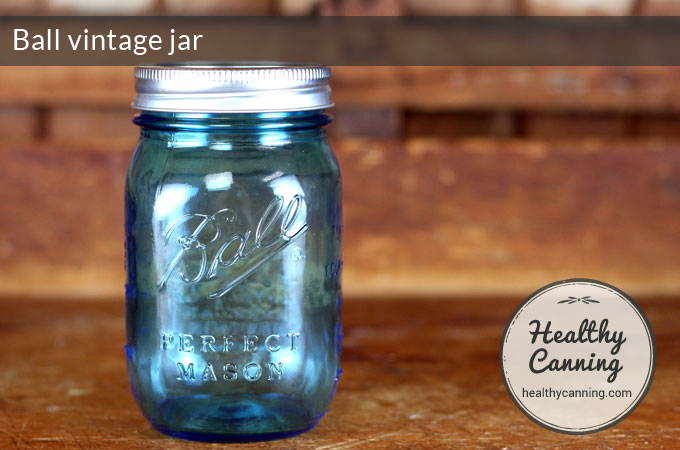 Ball around the world

In 2015, Ball accelerated its push into overseas English-speaking countries. It was already in Australia, and expanded into South Africa and the United Kingdom. It opened in the UK in June 2015. [7] Jarden Corporation Press Release. Preserving the British Summertime. Accessed February 2016 at https://www.jarden.com/latest-news-media/press-releases/preserving-british-summertime.

Ball South Africa (Site abandoned as of Dec. 2017. We reported this to Ball several times in 2018 but as of 2019 the orphaned domain was still in a vacuum.)

Update: As of March 2022, we have discovered that Ball has also now given up on its UK and Australian web sites. This is unfortunate, as those websites had metric conversions for many of their recipes, so those resources have been lost. To our knowledge, it only has a US website left.

Canada: Ball’s wares are sold through Bernardin, often rebranded or repackaged with the Bernardin name.

Ball on the social media web

From 2016 to 2017 approximately, Ball had separate Facebook pages for Australia, South Africa and the UK, but by 2018 had abandoned them and redirected users back to their main Ball USA Facebook page.

Contact Ball for canning questions as well as sales information for the following products: Ball, Kerr, and Golden Harvest (In the US. For Golden Harvest in Canada, contact Bernardin.)

To date (2016), the mothership company “Newell” has chosen to continue marketing its home canning supplies through Ball’s sister company in Canada, Bernardin.

Many “Ball” products are sold in Canada branded as Bernardin. For many of the products, the packaging is exactly the same right down to the design and colour branding with the exception of (a) metric equivalents; (b) French / English packaging, and (c) the Ball name replaced with Bernardin name on the packaging. The items are all made in the same Newell-owned factories in the states. 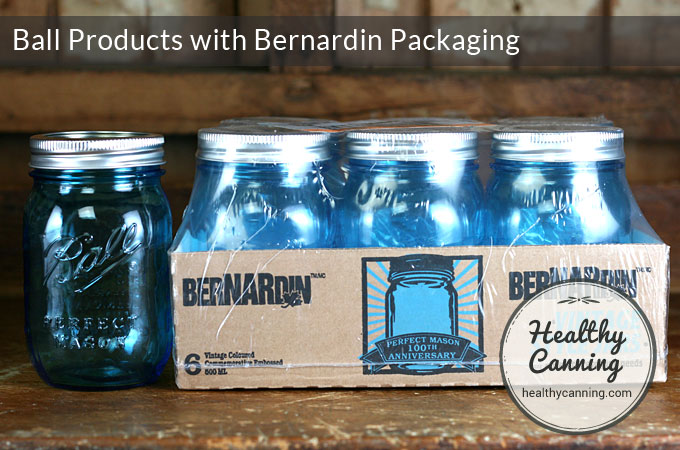 One notable difference between the two lines is that most Bernardin-branded jars have three flat sides to them, making labelling easier.

These small Ball jars can be great for canning single-serve portions of things for friends and family living on their own.