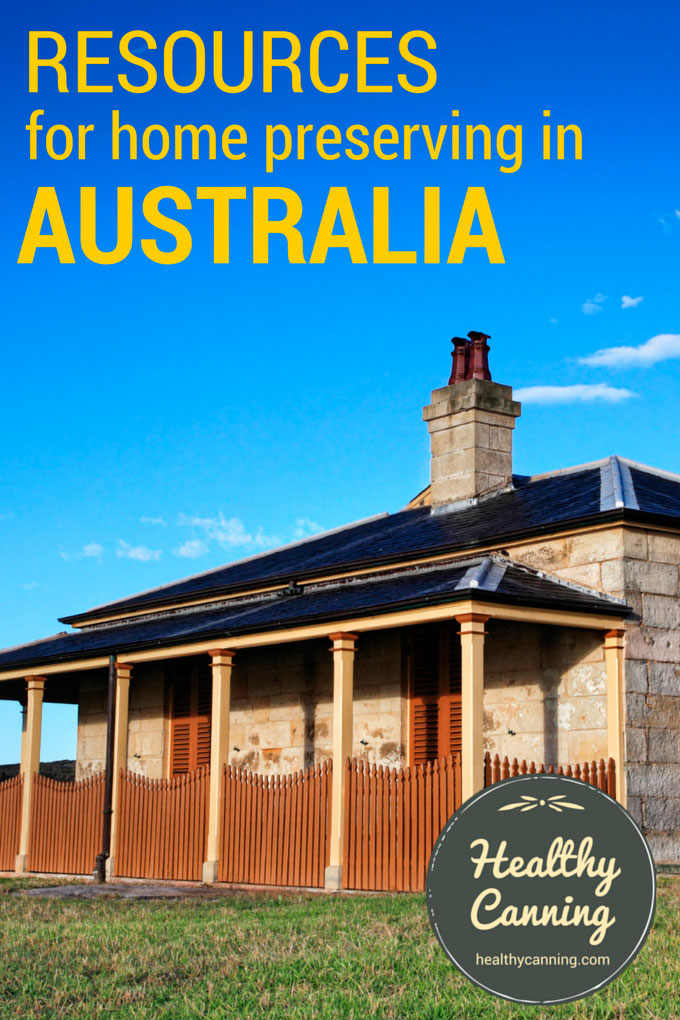 Australia and New Zealand have joint official guidelines for safe food handling, but only for commercial: nothing for homes.  [1] Safe Food Australia: A Guide to the Food Safety Standards.” Australia New Zealand Food Authority. 2nd Edition, January 2001. Accessed March 2015 at https://www.foodstandards.gov.au/publications/documents/complete_safefood.pdf. They have not invested in the research for home preservers as the United States has.

Preserving with no heat treatment

Many people in Australia still practise “open kettle canning“. This odd home bottling term means that hot food is put into a jar, and the jar sealed with no further treatment. Yet, the jar is regarded as being “safe” for  room temperature shelf storage.

In America and Canada, this has not been accepted for decades as a safe method of food preservation: “The National Center for Home Food Preservation has worked with the USDA to develop current canning guidelines. Current guidelines do not allow the open kettle method (in which hot food is spooned into hot jars and sealed) or oven methods of canning. All foods must be processed after going into the jar.”  [2] Cooper, Rayna. Preserving the Bounty. Gettysburg, Pennsylvania. Gettysburg Times. 3 June 2009. Page B7.

The Commonwealth Scientific and Industrial Research Organisation (CSIRO) in Canberra, Australia, also recommends that all jars of preserves receive a heat treatment:

The manufacture of fruit and vegetable products such as pickles, relishes and chutneys by adding vinegar is an old art and quite safe if correct procedures are followed. These products should be given a short heat process after bottling to prevent spoilage during storage.”  [3]CSIRO. Vegetable Preservation. Updated 22 December 2017. Accessed Feb. 2018 at https://www.csiro.au/en/Research/Health/Food-safety/Vegetable-preservation

They add that jars that aren’t heat treated shouldn’t be stored at room temperature: “If there is no further treatment, products should be refrigerated at or below 5 °C.” [4]Ibid.

The main home canning supplier in Australia since 1915 has been Fowlers Vacola, founded by Joseph Fowler.

Fowlers sells both jars, and an electric hot water bath canner to process the jars in.

Fowlers has recently begun updating its canning recommendations to match those of the USDA more closely including:

Note that the company spells its name “Fowlers”, instead of “Fowler’s”, and that there’s only one ‘C’ in ‘Vacola’.

Fowlers Vacola jars have smooth necks as opposed to the threaded necks of Mason jars.

For a closure system on top, they use a three-piece lid system: a rubber sealing ring that goes onto the neck of the jar, a metal lid that goes on top of the rubber ring, and a “preserving clip” (aka metal clamp).

Of the rubber rings, Fowlers says: “We strongly advise that the rings be used only once and should be disposed of after opening processed bottles. Re-use of rubber rings will hinder or prevent the sealing process, with potential loss of contents as a result.” [5] Fowler’s site, Preserving Rings page. Accessed February 2016.

Fowlers says that the clip is removed once a seal is assured: “The Preserving Clip is an integral part of the preserving process, as it holds the lid in place during the process, whilst allowing air to be expelled from the bottle, creating a vacuum seal. Clips are only removed 12-18 hours following completion of preserving process, once vacuum seal is secured. ” [6] Fowler’s site, Preserving Clips page. Accessed February 2016

After you remove the clip, you would verify that you indeed got a vacuum seal, then wash your jars, label and date them, and store them away.

Both the rubber rings and the metal lids are BPA-free. The company says, “All of our products are BPA free.”  [7] Vacola to HealthyCanning.com 24 March 2015. Correspondence on file.”

Every different size of Fowlers jar has a number on it; and is meant for a different purpose.

Here is a table on the Fowlers site explaining Fowlers Vacola jar sizes.

Fowlers Vacola jars are very similar to a line of jars that used to be made in the United States. The US were made by Kerr, which called them “Economy” jars.  The neck of the jars had a smooth band on them, rather than being threaded. To seal the jars you used clamps very similar to the Fowler’s Vacola clamps still used today.  [9] Glawson, D.G. Who Remembers These? Blog posting 13 September 2013. Accessed March 2015 at https://www.cappersfarmer.com/humor-and-nostalgia/who-remembers-these.aspx Collectors call this a “Cap & Spring Clip closure.” Kerr made these jars from 1901 to 1957.  [10] Lindsey, Bill. Bottle Finishes & Closures: Part III: Types of Bottle Closures. 20 January 2014. Accessed March 2015 at https://www.sha.org/bottle/closures.htm

Fowlers sells electric boiling water bath canners, as Weck does and as does Ball (Ball, since 2015).

As of 2015, Fowlers offer a choice of two units: a stainless steel one called the “Professional”, and a plastic one called “The Simple, Natural Preserver.”

The thermostat on the device is designed to, over the course of an hour, raise the temperature of cold water in the pot to a boil, and process your jars in it. At the end of the hour, your processing is done and you remove the jars to cool.

Simply place fruit into preserving jar, top with the liquid of your choice (fruit juice, water, sugar syrup, liqueur), and seal with ring, lid and clip. Place bottles into unit which is filled with cold water and plug in. The Simple, Natural Preserver is fully automatic, there is no need to monitor the temperature. After 60 minutes, remove the bottles from the Simple Natural Preserver and allow to cool.”  [11]Website https://fowlersvacola.com.au/shop/fowlers-kits/the-simple-natural-preserver. Accessed June 2015.

Fowler used to say you could can anything in these canners but now have changed their directions to say that only high-acid foods should be canned using these boiling-water bath canners.

Fowlers Vacola have changed their bottling instructions VASTLY due to the realisation of Botulism risk. They used to think that simply by sterilising for said time, any contamination would be killed off. If you compare the old publications to the newer ones, you’ll find that the only produce they [now] recommend you preserve using their units (Open Water Bath Method) is that of high acidity. As Botulinium bacteria do not survive in high acid environments, 100 deg C (boiling point) is all that is required to kill off any contaminants, and create a vacuum seal in order to maintain such (as the contents of the jars contract as it cools). Low acid foods should never be bottled using this method.”  [12]User Tamandco. Feburary 2010. Accessed June 2015 at https://www.aussieslivingsimply.com.au/forum/discussion/14822/fowler-vacola-question

So if you see older, war-time era Vacola manuals give instructions for processing low-acid foods in these canners, get a new manual somehow: those old directions were wrong, and dangerous. All the updated manuals say the canners are for high-acid foods only.

Fowlers also wants you now to start acidifying your jars of tomato products before you water bath them, as per USDA recommendations:

….I know the Fowlers Vacola instructions say to add one or two (can’t remember off the top of my head) tspn of lemon juice to # 20 jar of tomatoes. That is on the lower end of the scale, that is the least acid fruit they suggest.”  [13]User Tamandco. Feburary 2010. Accessed June 2015 at https://www.aussieslivingsimply.com.au/forum/discussion/14822/fowler-vacola-question

You may pressure can with Fowlers Vacola jars and lids.

Note that the 21 and 23 quart American pressure canners (All-American and Presto) that will fit two layers of Mason US pint jars will fit two levels of Vacola No. 14 jars, but only one level of No. 20s and one level of no. 27s (because of the clips on the jar lids):

I recommend buying a big enough size so you can do two levels of jars at a time (because it does take a lot of time to do a batch). Our 21 ½ quart fits two layers of Ball Mason jars (12 oz), but not two layers of Fowlers Vacola no. 20’s (the size I most often use) because of the clips used during processing. I did measure the jars and researched how big the internal dimensions were of the 21 ½ quart, and thought it was going to work out before we bought that size! I can do two levels of No. 14 Fowlers Vacola jars, but only one level of No. 27’s would fit in, that’s for sure.”  [14]User “Dixibelle”. Posting made 8 October 2013 at https://www.milkwood.net/2013/10/08/to-vacola-or-not-to-vacola/

You need a canning rack between layers of stacked jars in a pressure canner. See: Double-decking.

Ball began trying to make inroads in Australia since about 2010.

They had a web site for Australia but closed it around the start of 2022.

They sell jars delineated in American volume measurements (such as pints, quarts and oz), without seeming to have delineated them for Australian metric as the parent company, Jarden, did with Bernardin jars in Canada, which is odd, considering that Australia went far more thoroughly metric decades ago than Canada has yet to do.

Note: Foodpreserving.org suggests Thermflo as an alternative equivalent for Clearjel in Australia.

Megan Radiach, author of “FoodPreserving.org”, says that she cleared with the Clearjel makers the use of Thermflo instead for Australian home canners. She writes,

After discussions with the ClearJel manufacturer, we were recommended Thermflo and we ran trials (all successful) and now distribute Thermflo Australia-wide in our online store.” [15] Radiach, Megan. Fruit Pie Filling: Thickeners. Blog post July 2013. Accessed June 2016.

Note above that Penn State Extension has also accepted Thermflo as an equivalent to Clearjel.

As of 2016, you can now buy Pomona Pectin right in Australia, with no worries about exchange rates or duties, etc.

You can order it there from Green Living Australia ; there are likely other places as well.

Altitude in Australia and home canning

Very few places in Australia are above 300 metres (1000 feet) and needing to worry about this, but there are a few, such as Canberra, with an elevation of 660 metres. Follow this list for a list of places in Australia where canning would be impacted by altitude.

Note that an Australian tablespoon is officially 4 teaspoons (20 ml), whereas for the most part outside of Australia, including New Zealand, the US, Canada, etc, a tablespoon is classed as being 3 teaspoons (15 ml.) When you are using a canning recipe, you will want to check to see which tablespoon the writer may have had in mind.

Jarden has chosen to sell its Ball US measurement jars in Australia, rather than its Bernardin jars which are already in metric, which would have perhaps made more sense for the Australian consumers. In any event, with the arrival of Ball Canning supplies in Australia, old Imperial sounding measurements are re-appearing.

A US pint (16 oz) and US quart (32 oz) are smaller than the old Imperial pints (20 oz) and quarts (40 oz) which were used throughout the Commonwealth. For home canning purposes, and given that Australia has been a metric country for close to 50 years now, the following conversions can apply:

Most Australians tend to measure solids (such as chopped celery) by weight, whereas American canning recipes will measure the same by volume using a measuring cup. You may see American faux  metric measures such as 250 ml chopped onion (to a metric person, the equivalent of asking for 3 fluid oz of bread.) If you want the Ball Blue Book in real metric (with weight measurements), search for the Ball Blue Book® Guide – Metric Edition which was produced for the UK market.