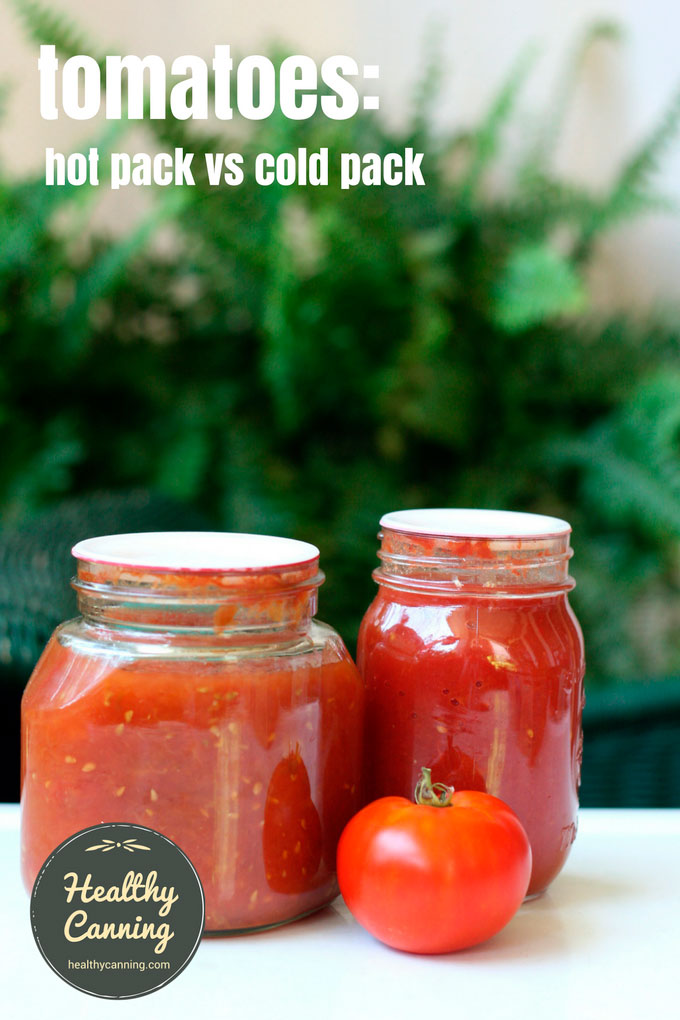 When canning tomatoes, some recipes call for raw pack, some for hot pack. Which type of recipe is better to choose?

Raw pack is when you prep the tomatoes, but don’t heat them in any way before packing them into the jars.

Hot pack is when you heat the tomatoes first to some degree before putting them into the jars.

Note that some methods of preparing tomatoes are hot pack only, some are raw pack only. Only a few methods will present you with a choice. And, there is one method that is raw-pack only.

Note: acidification, and post-packing processing of the jars, are still required, whatever pack method you use.

You do save some preparation time, it’s faster to do.

Besides saving time, another advantage to raw packing could be flavour. The Ball / Bernardin Complete guide says:

Packing tomatoes raw with no added liquid produces the most concentrated flavour. However, this method requires extended processing times to ensure that the heat fully penetrates to the center of the jars.” [1]Kingry, Judi and Lauren Devine. Ball / Bernardin Complete Book of Home Preserving. Toronto: Robert Rose. 2015. Page 356.

You will get a lot of floaties at top of jar and water at the bottom (an aesthetic issue, not safety).

Because the food is rising and pushing to the top of the jar, it could push out canning liquid too, possibly causing problems with getting a seal.

Besides that, doing a raw pack may cause more separation of tomato solid matter and liquid.

When the jars cool, you may end up with jars with increased headspace because the air that was in the food will have been released and will be at the top of those jars.

Raw pack results in a shorter shelf life in terms of appearance (though not safety), and some say, taste and nutrition.

Some sources now advise that tomatoes should not be raw packed at all. The Alabama Cooperative Extension said in 2012:

…raw packing of tomatoes is no longer recommended. It has been found that a highly heat-resistant mold is able to survive during the processing. When this mold grows, it changes the pH of the tomatoes from a high-acid to a low-acid product. The canned tomatoes then become susceptible to the growth of Clostridium botulinum.”  [2] Patricia West and Evelyn F. Crayton. Wise Methods of Canning Vegetables. Alabama Cooperative Extension System. EFNEP-0190. August 2012. Accessed March 2015 at https://www.aces.edu/pubs/docs/E/EFNEP-0190/EFNEP-0190.pdf.

However, both the USDA / NCHFP ( here ) and Ball still have recipes for packing raw tomatoes, with the same processing times as for hot pack tomatoes.

In the 2015 USDA Complete Guide, the USDA did not rescind its raw-pack options. 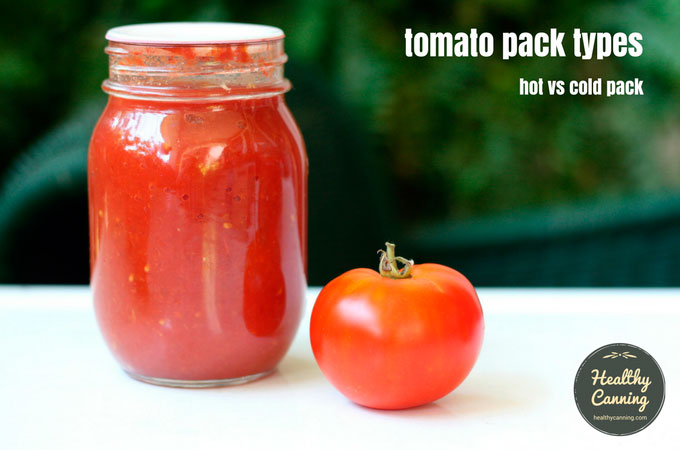 Hot packing tomatoes for home canning is a bit more work, because you have to partially blanch / cook the tomatoes first.

Heating tomatoes before packing into a jar releases air from them, so you can fit more into a jar. This means it’s more economical: fewer jars  and lids needed, and fewer jars needing processing.

There is a lower chance of food floating to the top, or liquid being pushed out during processing.

The University of Alaska Extension says,

For tomatoes, the hot-pack method has some advantages over raw-pack method. Heated tomatoes are easier to pack because they are softer, allowing for a tighter pack in each jar. In addition, tomatoes that are hot-packed float less. ” [3] Roxie Rodgers Dinstel. Canning Tomatoes and Tomato Products. University of Alaska Fairbanks Extension Service. FNH-00171. May 2011. page 1

One of the reasons is that heat quickly applied destroys the enzyme that causes the separation, before it has time to act. The Ball / Bernardin Complete explains:

Using the hot-pack method when packing them whole also helps to inactivate this enzyme [Ed: the enzyme that causes jars of tomato products to separate into solids and a layer of water.]”  [5]Kingry, Judi and Lauren Devine. Ball / Bernardin Complete Book of Home Preserving. Toronto: Robert Rose. 2015. Page 353.

You will get a longer shelf life in terms of appearance. Some sources feel that you get a better vacuum and seal as well.

Hot packing and good quality tomatoes will give you a higher vitamin content. Initially, when you heat the tomatoes you will loose some nutrients. However, over storage, hot pack of tomatoes will retain nutrients better than cold pack.” [6] Hudson, Nancy. New research gives tips on using jars and lids. Xenia, Ohio: Daily Gazette. 7 April 1986. Page 6.

Avoiding separation in either pack type

Either pack type can be susceptible to separation of liquid and solids at times, though moreso with raw pack.

This does not affect taste, safety or nutrition. 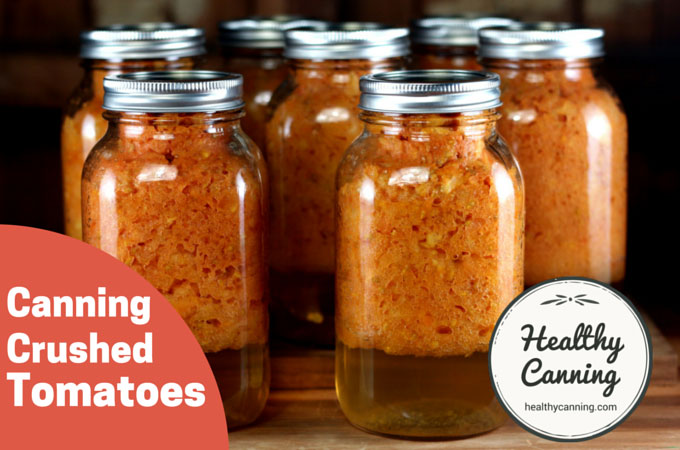 Bernardin explains why this can happen and how to reduce the chance of its occurring:

During storage, pulp and juice in home canned tomatoes may separate, especially in sauce or juice made with crushed or puréed tomatoes. Separation is caused by an enzyme, Pectose (‘Pectinesterase’), found in high concentrations in tomatoes. The enzyme is activated when tomatoes are cut. To reduce separation, heat tomatoes quickly over high heat to 82 C (180 F) to destroy the enzyme.” [7] Bernardin Guide to Home Preserving. Toronto, Canada: Bernardin Ltd. 2013. Page 48.

That is why you will see directions such as:

Heat one-sixth of the quarters quickly in a large pot, crushing them with a wooden mallet or spoon as they are added to the pot. This will exude juice. Continue heating the tomatoes, stirring to prevent burning. Once the tomatoes are boiling, gradually add remaining quartered tomatoes, stirring constantly.” [8]United States Department of Agriculture (USDA). Complete guide to home canning. Agriculture information bulletin No. 539. 2015. Page 3-7.

A “modern cook” may think, Lordy lord, what a lot of fuss, thank goodness we have food processors now, I’ll just whiz them all at once and be done with it and then heat that mixture up.

And more often that not, experience product separation in the jar and wonder why.

So when you cut or crush tomatoes for canning, get them heating as soon as possible after that has happened. Don’t let them stand around longer than you have to which would allow that enzyme to do its dirty work of separating your tomato products.

Consult our list of tomato product recipes to see which ones call for which type of pack. 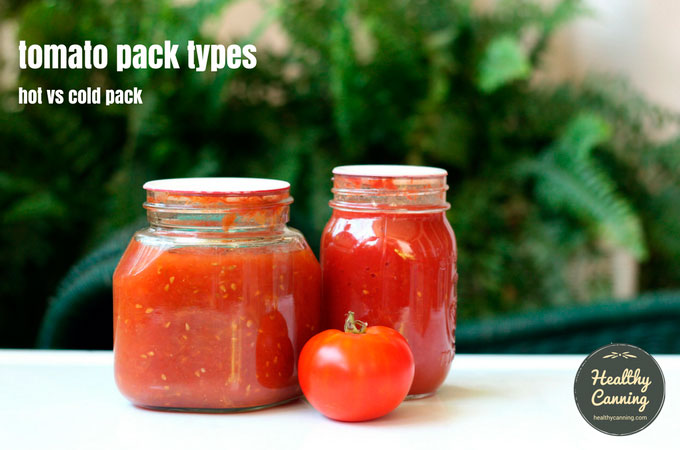