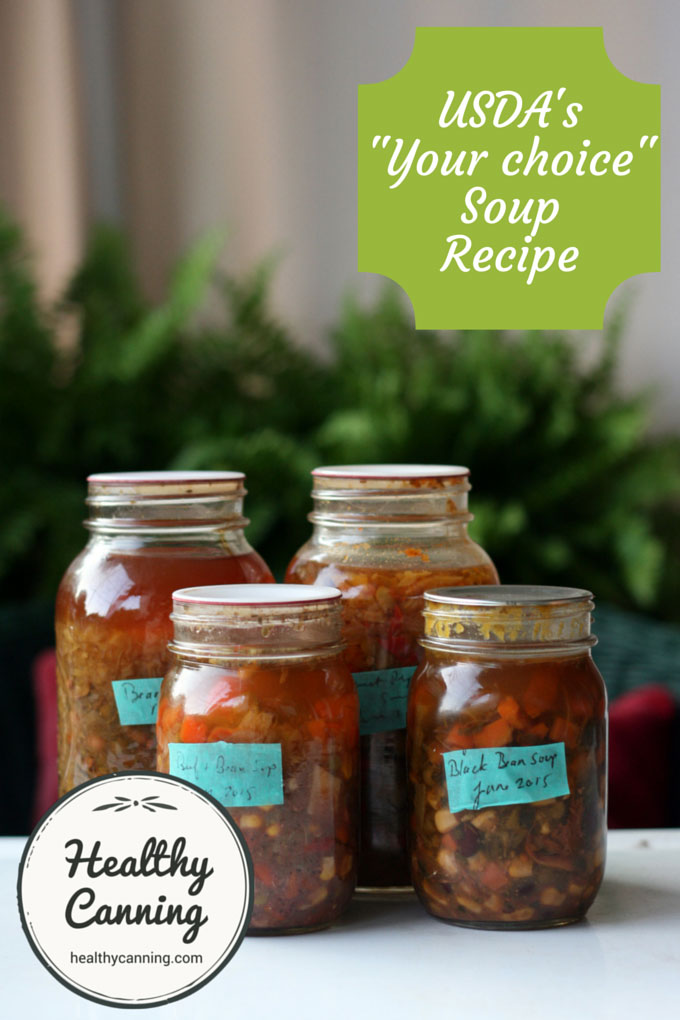 The USDA offers guidelines for a free-wheelin’, homemade soup that we’ve branded “your choice” soup for easy reference. They give you guidelines inside which you can “create your heart out.”

These recipes can be some of the more useful canning recipes in your arsenal, letting you create jars of instant lunches out of odds and ends of produce that needs using up but of which you don’t have enough for a canning run on its own.

The guidelines are some of the more “looser” guidelines that you will come across in home canning. They tell you what you can’t put in, and how long to process. So the cook actually has a lot of creativity within those safety parameters. You can do what you want within the boundaries, and be assured of safety.

Please note that no matter how long you cook a soup in advance in your soup pot, the processing time does not change. The soup will cook during the processing time, so you might as well take some advantage of that – but the processing time is actually meant to be sterilization time of the food product, and all of that time is needed and it cannot be reduced.

To be clear, the “half and half” rule for soup applies only to these “free-wheelin'” guidelines. You will see other soup recipes from reputable sources that don’t follow the “half and half” rule, and that’s fine,  because those recipes had processing times developed specifically for that set of ingredients in them. As the USDA is presenting you with a very wide slate of ingredients to pick at random from, they want half-liquid in the jar to ensure total, maximum heat flow during canning.

Jar size choices: Either half-litre (US pint) OR litre (US quart) 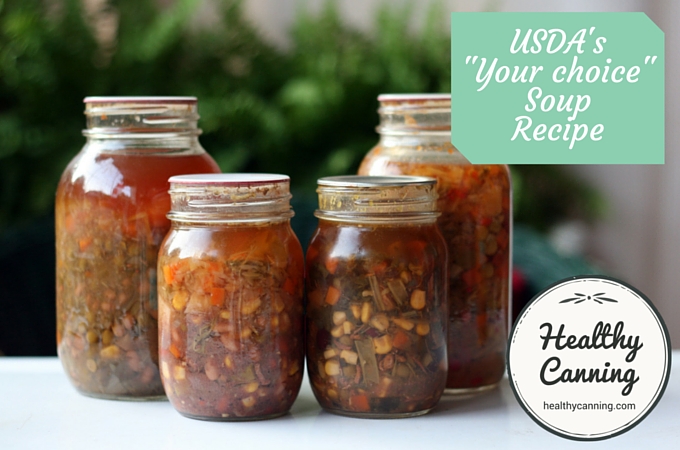 How to safely home pressure can a soup mix of your choice, according to the USDA guidelines.

Your choice of items for which separate canning instructions already exist

Note: Processing time for either size jar must be increased to 100 minutes if the soup includes seafood. It’s not clear if they distinguish salt-water fish from seafood, or if they include fish (fresh or salt-water) in that. 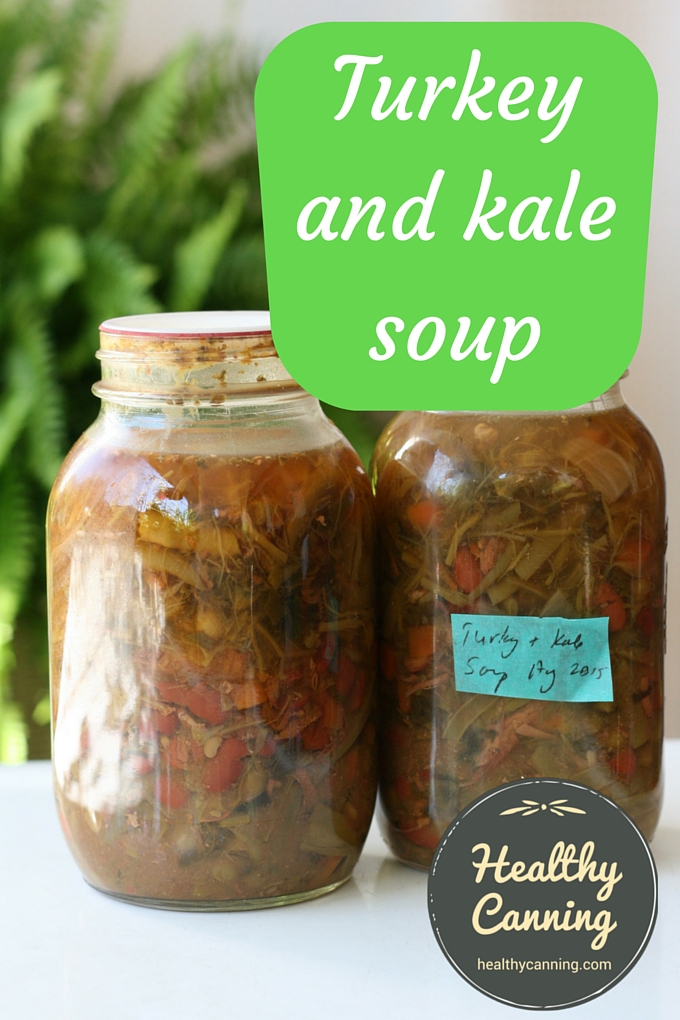 The litre-sized jars of turkey and kale soup (pictured above) were half-solids going into the canner. The carrot, bean, pea, asparagus, etc in it swelled during processing.

The ratio of ingredients must be ½ liquid and ½ small cubed solids.

That basic ratio requirement is designed to ensure that there is enough non-viscous liquid in the jar to circulate around everything and distribute heat evenly during processing.

Some people think that means they are going to end up with a bowl of soup that is half water. They are forgetting that many ingredients will swell during pressure canning, such as corn and peas, and that dried beans will take in a lot of that liquid. So at the end of the pressure canning process, the visual result is often more ¾ solids, ¼ liquid owing to liquid absorption by the ingredients.

That’s probably precisely why the USDA wants that “one-half” safety margin going into this.

So don’t worry, you are not going to be accused of being “cheap” and trying to serve people “water soup” : the soup will be plenty dense after canning!

Ingredients to use in the USDA “free-range” soup

What can you use? You may use any amount of any ingredient for which there are already tested canning recommendation. The NCHFP clarifies: “These directions are intended for use with ingredients that already have separate canning recommendations for those foods.”  [1] National Center for Home Food Preservation. Soups. Accessed July 2015.

The USDA has entire produce-aisles full of recommendations for items to home can, so that gives you an embarras du choix of ingredients to work with.

Onion in the USDA soup

Even though the USDA doesn’t have a recommendation for onions, the University of Georgia does, so you can use onion provided you follow the recommendation which is: use baby onions 2 to 3 cm max in size (1 inch), wash, peel, blanch for 5 minutes, then you can use it in the soup. You may also cut up or dice this blanched onion as part of the free-range soup ingredients.  [2] Elizabeth Andress to Randal Oulton. Email. 30 July 2015. Email on file.

Ingredients to avoid in the USDA “free-range” soup

Following are the few things you can’t use as ingredients in the USDA’s soup recipe.

Naturally, human inclination is to focus on the handful of things we can’t have, rather than the tractor-trailer loads of things we can have — but the “can’ts” really aren’t that many:

If there’s an ingredient that you really strongly feel you should be added to the all-clear list, then perhaps see if you can start a group-funding drive on the Internet to raise research funding for the NCHFP to research it!

Celery note: The University of Alaska Extension service has released some soup recipes based on the USDA’s soup guidelines which do have celery in them. See: Sarah Lewis, Family and Community Development Faculty. Canning Soups and Sauces. UAF Cooperative Extension, Juneau District. November 2014. 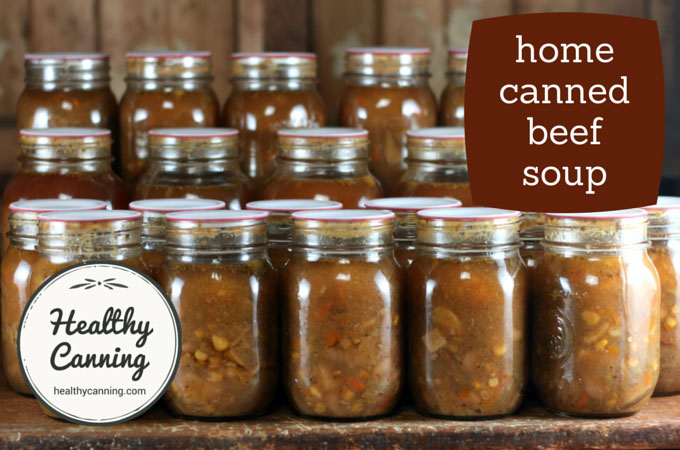 The USDA’s “Your Choice” directions guarantee safety on the assumption that you are dealing with chunks of food allowing heated water to pass freely between them. Puréeing the ingredients would cancel out this guarantee. Puréeing vegetables voids their normal tested processing times, because you’ve changed the density and made it thicker, so there are no known processing times for that vegetable in that form.

To make puréed soups, simply put the ingredients in the jar cubed, can it that way, and when you go to use it and heat it up, just open the jar and whiz the contents in a blender then heat. In this way, you are still getting the convenience of an almost-instant homemade creamed soup.

Granted “puréeing at time of use” works only for soups consumed at home, and is not really practicable for soup in jars taken as work lunches. But there are tested recipes for puréed pea soup, and carrot soup, provided by Ball and Bernardin.

How to cheat and thicken the soup

Thickening tip: if you like okra, considering adding some to your soup. Okra when cooked is mucilaginous, and will help lend a thick mouth-feel to your soups. And, it’s solidly on the list of ingredients you may use!

For a fuller discussion of ways to “cheat” and safely “thicken” the soup, safely, see: How to thicken your home-canned soups.

Any meat should be cooked first until tender (you can sear chunks of beef, pork, lamb, etc first for flavour and colour if you like but do not dredge the meat in flour.) Remove all bones from the meat before using in the soup. Meat should be in small cubes (it’s not defined exactly how small.)

All root vegetables must be peeled, to reduce bacterial load. All vegetables should be blanched first, as you would for a hot pack canning with them. The NCHFP says, “Each vegetable should be selected, washed, prepared and cooked as you would for canning a ‘hot pack’ according to USDA directions.”  [7] Burning Issue: Canning Homemade Soups. National Center for Home Food Preservation. 27 March 2013. Accessed March 2015.

Summary: The full canning prep for canning dried beans would normally be rehydration, then a 30 minute boil. But for the soup, you don’t do the 30 minute boil.

Any dried beans or dried peas must be fully rehydrated first otherwise they will absorb the water in the jar and severely affect heat penetration.

To quick rehydrate beans: put in a pot 1 part beans to 3 parts water. Bring to a boil, let boil for 2 minutes, remove from heat, let stand for an hour. Bring back to a boil, then drain. They are now ready to add to your soup mixture for canning. You don’t then boil them for 30 minutes, as you would for canning on their own.

The USDA says, ” For each cup of dried beans or peas, add 3 cups of water, boil 2 minutes, remove from heat, soak 1 hour, and heat to boil; drain.” [8]United States Department of Agriculture (USDA). Complete guide to home canning. Agriculture information bulletin No. 539. 2015. Page 4-18. That’s it for the soup mixture.

So, for these soup directions, just rehydrate dried beans according to USDA instructions, and skip the 30 minute boil after that. They will be cooked plenty during the processing in the jar half full of liquid.

If you’re unsure of how to start making up a soup from scratch, while following the guidelines, Sarah Lewis at the University of Alaska has come up with three great sample recipes following the USDA’s “your choice” guidelines  [9] University of Alaska. Lewis, Sarah. Canning Soups and Sauces. UAF Cooperative Extension, Juneau District. November 2014. Accessed July 2015. :

You can access the recipes in a free PDF at the UAF Cooperative Extension site. 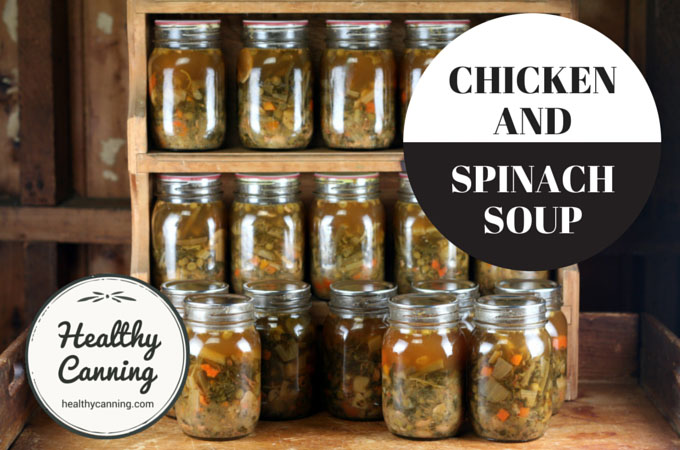 When we asked these people their source authorizing this practice, we were told “Accepted practice.”

Then, there is this advice from Penn State:

One possible issue with venturing outside the USDA “your choice” guidelines has been raised in an Internet discussion forum on pressure-canned soups: “The old-timers would approach a recipe like yours by canning the mixture using the longest processing time for the ingredients in your list. But that strategy doesn’t address the density issue.”  [11] Garden web discussion. Pressure Canning Soup — Am I reading this right? 22 August 2006. Accessed July 2015.

If you are interested in this ‘longest-time-ingredient’ approach, you may be best advised to send a query to the National Center for Home Food Preservation asking their thoughts on the matter before acting on the advice.

Do people get sick from disregarding tested methods for home canned soup?

The “your choice” guidelines are entitled just “Soups”, and are found in: United States Department of Agriculture (USDA). Complete guide to home canning. Agriculture information bulletin No. 539. 2015. Page 4-18.

Feel like dumplings? You can quickly add soup dumplings to your home-canned soup when you go to open a jar, if you’ve got some of this DIY Biscuit Mix on hand.

Heat the home-canned soup to a gentle boil first in a saucepan before adding the dumplings, then simmer covered for 15 minutes.

(To be clear: for taste, texture and safety reasons, you would not want to home-can soup with dumplings already in it.)

Here is the USDA advice from 1947. Do not follow this now; this is for academic information only to show how the advice has changed.

Notice that even in the 1940s they required pressure canning for the soups.

Note as well the similarity with the Penn State advice above for the “longest ingredient.”

If you haven’t stored your pressure canner for the season. Blog post by National Center for Home Food Preservation. 23 January 2013.