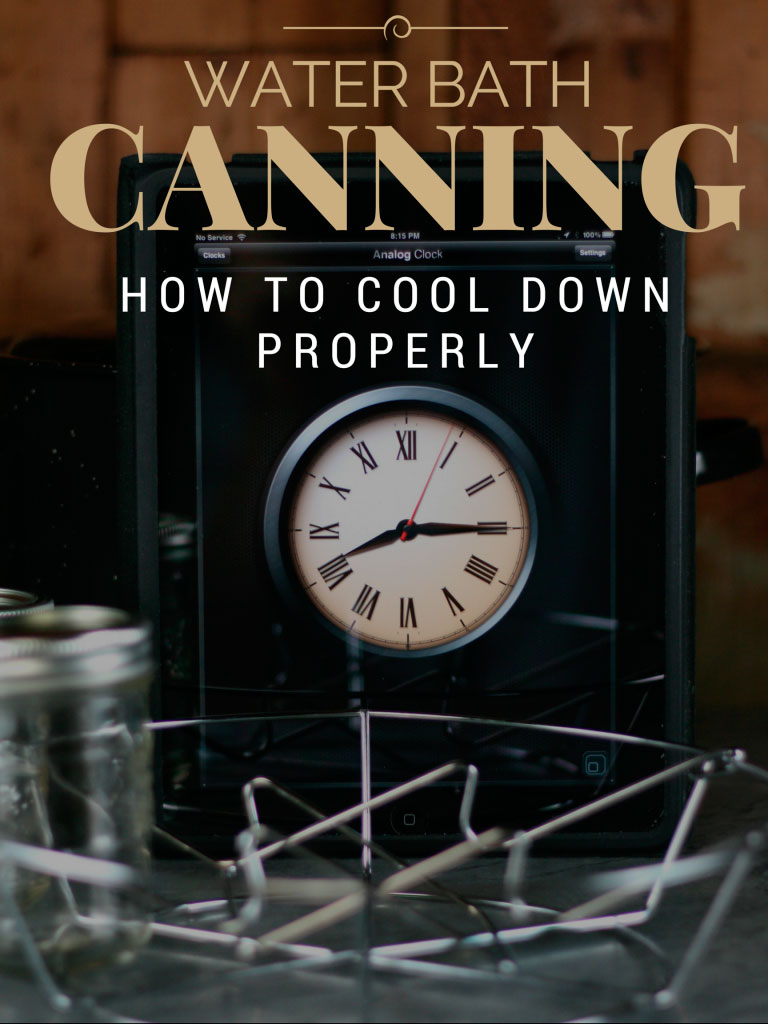 Here is the cool down procedure:

Don’t cover the jars in an attempt to lengthen the time that the jars stay warm — you run the risk of your jars developing flat sour.

Just let the jars cool naturally out on a counter or table, away from drafts or cool breezes.

After the time is up on the recommended hot water bath processing time for your recipe, turn off the heat, remove the cover, and let the jars settle for 5 minutes  [1] This settling is for product quality: it helps prevent an extremely fast change in temperature for the jars, causing contents to surge up onto the rims causing sealure failures. Have a wire rack or thick hand-towel placed out somewhere free of drafts or cool winds. After the 5 minutes, remove the jars and place on your prepared surface at least 3 cm (an inch) apart.  [2]Placing jars apart helps keep the jars out of moderate temperature zones where flat sour could develop. Don’t cover the jars with a towel or anything.  [3]Covering the jars could also keep them in moderate temperature zones. Let stand for 12 to 24 hours undisturbed [4]Lids actually may seal and unseal several times during this time, so let them do their thing., then remove rings, check seals, wash jars if needed, label, and store away without the rings on.

In 2014, researchers in the Department of Food Science at the University of Wisconsin-Madison tested home preserving three foods (applesauce, tomato juice, and cranberries) using the boiling-water bath method. The study was published in January 2015 in Food Science & Nutrition journal.

They followed the USDA Complete Guide (2009) research-based methods and processes, processing the jars in a boiling water bath canner for the recommended periods of time. Among their other findings, they found that the USDA recommended cool-down procedure for the jars after hot water bath processing was actually a critical part of the process. A lot of bacteria inside the jar are still being killed while the jars are cooling down from the high heat of the boiling water.

So, when you are water bath or steam canning,
Don’t lose your cool!

What the researchers said

Here are some extracts from that January 2015 Food Science & Nutrition article:

Most of the lethality during home canning occurred during air cooling, making cooling of home canned foods of great importance.

“We processed applesauce, tomato juice, and cranberries in pint jars in a boiling water canner to test thermal processing theories against home canning of high-acid foods. For each product, thermocouples were placed at various heights in the jar. …. There was a cold spot in the jar, but the cold spot during heating became the hot spot during cooling. During heating, the geometric center was the last to heat, and remained coldest the longest, but during cooling, it was also the last to cool, and remained hottest the longest. … Most of the lethality during home canning occurred during air cooling, making cooling of home canned foods of great importance.”

“Thus, as long as up-to-date, research-tested home-canning [Ed: water-bath] practices are followed for high-acid foods [Ed: most jams, jellies, pickles and relishes], consumers can be reassured by the inherent safety of the product that they are producing for themselves and their families.”