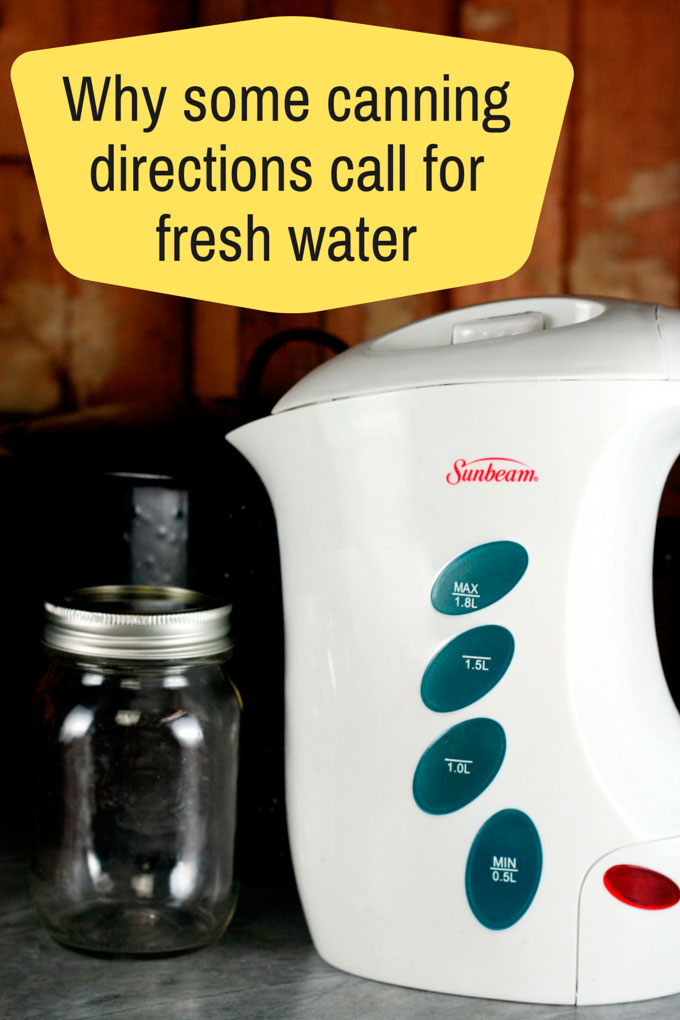 Many pressure canning instructions for vegetables call for fresh water to be added to the canning jars, instead of using the water that the vegetables were blanched in.

This will seem counter-intuitive to many cooks new to canning, because they’ll know that many nutrients in the vegetables — not to mention flavour — leeched out in to the blanching water.

The National Center for Home Food Preservation says it’s because the starch in some blanching waters can cause canning issues. They write:

But otherwise, all potatoes — white or sweet — should have fresh, boiling water prepared to pour over the preheated potatoes.  Do not use the cooking liquid.  That cooking water contains a lot of starch that comes out of the potatoes and the process time was determined using fresh boiling water to cover.  The added starch can create  a safety problem by slowing down heating of the potatoes in the canner, and it also creates a very unappealing pack with possible masses of gelled or congealed starches around the potatoes.  If you have spoilage, this makes it very hard to see the signs of some spoilage.”  [1] National Center for Home Food Preservation. Potatoes. Comments section, comment posted 25 November 2014.

There can be another reason: taste. Putting Food By says,

Some precooking water can be bitter. This of course depends on the hardness of the water to begin with, and to some extent on the growing conditions of the vegetable. However, water in which asparagus, some greens, and members of the turnip family are precooked for hot pack can be bitter; taste the water, and if it is too strong or has a bitterness, substitute boiling water as the canning liquid.”  [2] Hertzberg, Ruth; Greene, Janet; Vaughan, Beatrice (2010-05-25). Putting Food By: Fifth Edition (p. 132). Penguin Publishing Group. Kindle Edition. Note: Healthy Canning occasionally cites Putting Food By. This doesn’t constitute an endorsement of the entire book per se.

But don’t despair: you could always freeze any rich blanching water and use it as free, delicious broth for soups, stews, sauces and risottos!