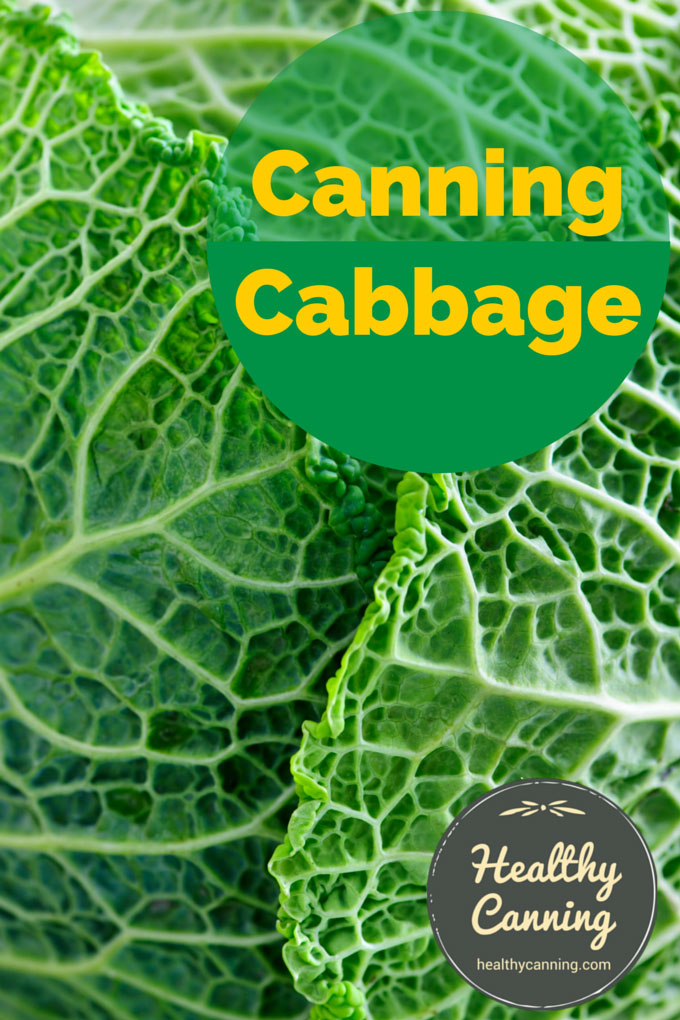 The question of canning cabbage often comes up.

Neither the USDA nor the National Center for Home Food Preservation nor any of the reputable, science-based sources for trusted recipes have a recommendation for home canning plain cabbage at this time, either by itself or as an ingredient in pressure-canned recipes. Disregard any advice you see to the contrary on Youtube or elsewhere on the Internet.

This does NOT mean however that you can’t can cabbage in other ways.

You can can cabbage if you pickle it, either by itself (sauerkraut), or as an ingredient in a relish, chow, chutney, etc. The acidification involves makes it perfectly safe, and delicious, to can in these ways.

You can home can sauerkraut for instance (do not attempt to reduce the salt.)

You can use cabbage in many relish recipes such as chow chow, American Piccalilli, Dixie, etc, and other such pickled condiments.

Here’s a link for our recipes for canned preserves using cabbage.

It appears that, back when there was funding to study cabbage, perhaps in the 1930s and 1940s, the USDA researchers didn’t pursue researching safe canning procedures for cabbage because of quality issues: they decided, presumably, that by the time it was done, no one would want to eat it, so the research efforts would be wasted and they abandoned their studies. The National Center for Home Food Preservation (NCHFP) said on their blog in January 2015,

Cabbage tends to discolor and intensify in flavor when canned, so it is not recommended for canning due to quality issues (unless used for sauerkraut or in one of our canned relish recipes). Also, because it is more dense and rigid than greens such as spinach, the process time for Spinach and Other Greens would not necessarily be sufficient heat treatment to destroy pathogens and the final product could be under-processed. As you probably know, low acid foods like cabbage are at risk of causing botulism, so we do not just guess at a process time – the risk is too great. So I’m sorry to disappoint, but we do not have a recommendation for home canning cabbage as is. We currently do not have the resources to conduct individual product testing, and we do not know of others looking to do so at this time.”  [1] NCHFP blog comment 23 January 2015. Accessed March 2015.

The Putting Food By authors say the researchers were probably wise to just call it a day on the research. They basically say that home canned cabbage would taste awful: “Broccoli, Brussels Sprouts, Cabbage: These discolor when canned and grow even stronger in flavor. So instead, freeze broccoli or Brussels sprouts, ferment cabbage as Sauerkraut (see how to can later); or use any or all in mixed pickles as liked.”  [2] Hertzberg, Ruth; Greene, Janet; Vaughan, Beatrice (2010-05-25). Putting Food By: Fifth Edition (p. 137). Penguin Publishing Group. Kindle Edition.

Ball did have canning recommendations for plain cabbage, which varied wildly over the years, but renounced all of them in 1977 (see history section below.)

Given that only vegetables with individual canning recommendations can be used in the NCHFP’s “free-choice” soup mix“, that means that cabbage, not having such a recommendation, cannot be:

The procedure for canning soup says ‘Each vegetable should be selected, washed, prepared and cooked as you would for canning a ‘hot pack’ according to USDA directions”, which means that there must be a canning recommendation for each added ingredient…. for this reason we cannot recommend adding cabbage…”  [3] NCHFP blog entry 5 March 2015. Accessed March 2015.

So this means you can’t pressure can plain jars of cabbage, nor can you use it as an ingredient in their pressure canned soup mix recipe.

Use kale, spinach, mustard greens, or chard instead which do have canning recommendations. 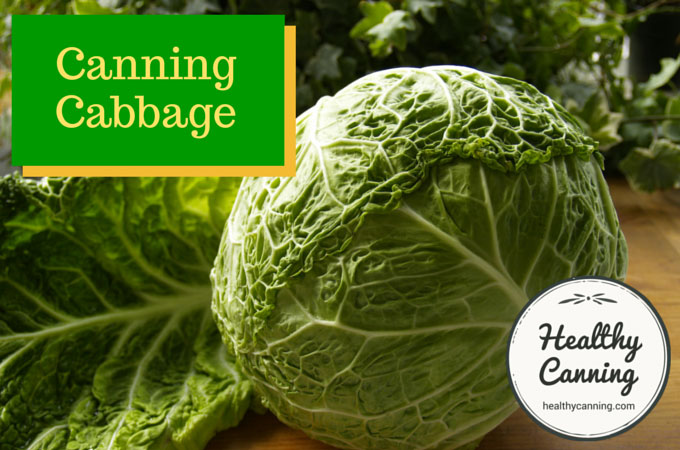 Cabbage as an ingredient in other savoury recipes

There don’t seem to be any tested recipes from approved sources as of spring 2022 using cabbage as an ingredient in pressure-canned items. It seems very odd, considering that throughout history it has often fallen to the lowly cabbage to nourish people when all else failed.

HealthyCanning.com is aware of the unofficial recipe for Unstuffed Cabbage Roll that floats around safe canning groups and gets a nod of approval from them, but it hasn’t been lab-tested for density processing times, and there’s no individual processing time for cabbage to use towards the longest-time ingredient rule.  We mention it only because even though it uses a great deal of cabbage and is processed for the same time as meat (75 and 90 minutes for pints / quarts), people do seem to rave about the flavours and no one mentions any strong, disagreeable cabbage taste.

To be clear: everything in this section is for historical reference purposes and is actively recommended against by the USDA as being unsafe. Do not attempt to can plain cabbage. If you see numbers such as this being cited, this (outdated Ball Blue Books) is where they are coming from.

The Ball Blue Book used to have directions for home canning plain cabbage.

By 1930, Ball had revised their thinking.

Wash and blanch (boil) for 10 minutes in an open kettle. Add salt to blanching water in proportion of 1 level teaspoon salt to 1 quart water. Pack hot into clean BALL Jars, fill with blanching liquid, partly seal, and process for 2 hours in a Hot-Water Bath, or for 40 minutes in a Steam Pressure Cooker at 10 pounds. Remove from canner and seal at once.” (Ball Blue Book, O Edition, 1930. Page 12. Times for quart jars.)

Directions for cabbage appeared for the last time in the Ball Book Book in 1974, at which point the times had changed yet again: 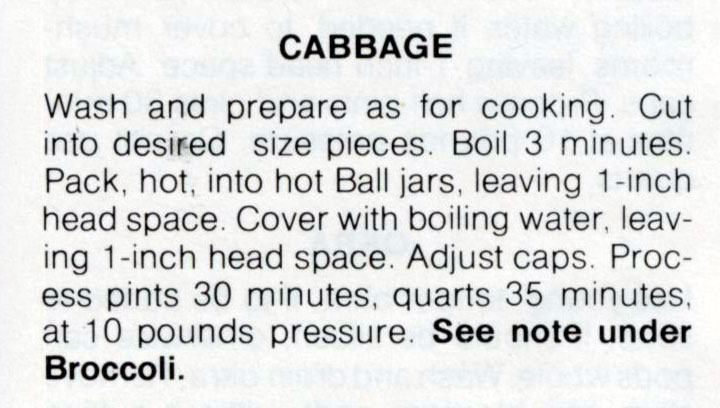 In 1977, the 30th edition of the Blue Book appeared. The year before, 1976, Ball had established its first ever ‘Fresh Preserving Test Kitchen’ [4]”We’re certainly canning experts — the first official Fresh Preserving Test Kitchen was started in 1976….” Harrold, Judly. Forward. Ball Blue Book, 37th edition, 2014., and, the foreword of that 30th edition notes, “Currently, a major ongoing research project concerning heat penetration is being conducted by a leading university. [ED: possibly  Zottola et al at the  University of Minnesota]” In this 30th edition, canning advice for cabbage was dropped completely, and just replaced with this note on page 65 of the book: “Freezing results in a better product than canning. See page 92 for proper instructions on freezing cabbage.”

[ED: To be clear, the above information is for historical information purposes only to show that yes, there were directions at one point in time, but they were dropped, and should not now be used for home canning under any circumstances.]

The USDA never backed canning plain cabbage. It was Ball who did, and they changed their mind several times over the years. As a private company, Ball couldn’t of course be expected to release any of the research behind its changes in thinking, as the USDA does. But the dropping of cabbage did coincide with its new test kitchens, and, with the new heat penetration studies, the results of which Ball would have had access to.

If you want to know whether Ball dropped plain cabbage for safety reasons based on the new information they had, or for quality reasons, you will need to contact Ball and ask. It’s Ball that had put out the directions: the USDA never had.

If you see these processing times for plain cabbage floating around the Internet, this is where they came from, and they were repudiated by Ball in 1977.