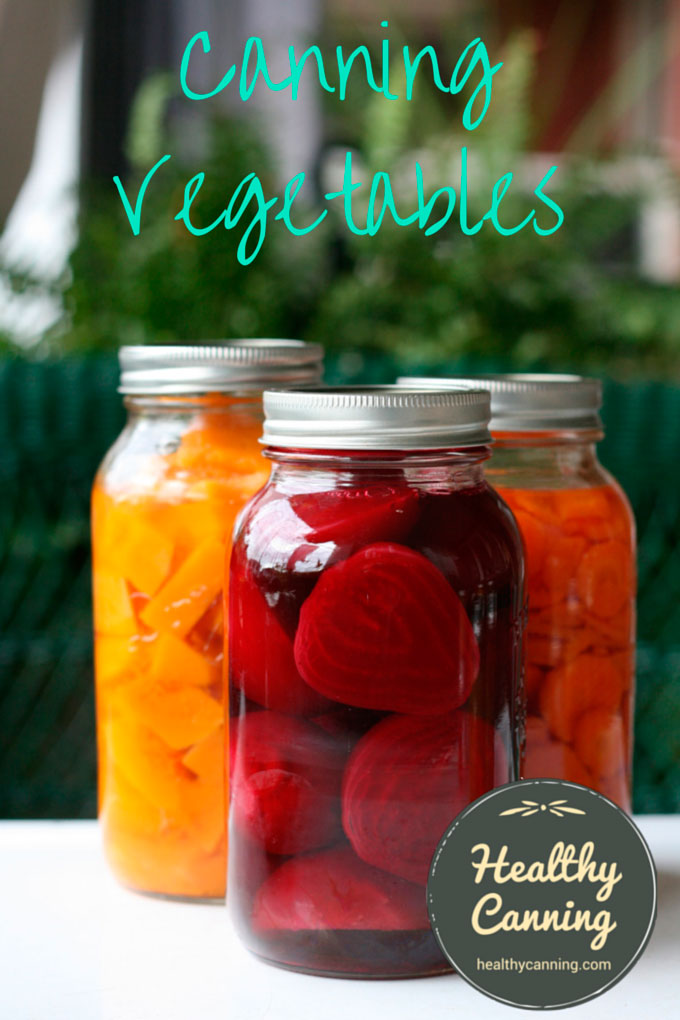 Vegetables can be preserved at home through home canning in two different ways: either as plain, pressure-canned vegetables, or, used to make condiments such as pickles, relishes, chutneys, etc.

There are two methods of canning vegetables for shelf-stable storage. They must be either:

Anyone who has the enterprise to can vegetables at home surely has the good sense to want to can them safely. Because all fresh natural (as opposed to pickled) vegetables are low-acid, they MUST be processed in a regular Pressure Canner. And no shortcuts, no skimping….anything less than adequate Pressure-processing is a monstrous gamble. People who count on getting away with processing natural vegetables in a Boiling–Water Bath are playing for stakes too high.”  [1] Hertzberg, Ruth; Greene, Janet; Vaughan, Beatrice (2010-05-25). Putting Food By: Fifth Edition (p. 129-130). Penguin Publishing Group. Kindle Edition.

To be clear, you can’t mix up the two methods of canning for the two approaches to vegetables:

What is the quality of home canned vegetables?

If you’ve never had home canned vegetables, the first thing to do is to disassociate the idea of what they might be like from your experience with commercially-canned vegetables. In fact, it might be best to start thinking of the store-bought ones as tinned vegetables.

Home pressure canned vegetables will smell as fresh as when you brought them into your kitchen, without the cloying metal smell and taste of a tin from the store.

Many vegetables taste more of themselves after pressure canning: mushrooms taste more mushroomy, beets taste more clean without a dirt taste, carrots taste carroty — and almost smell pure orange when you open the jar. Corn and green beans don’t have that metallic store-canned tang to them. Peas stay firm and clear in taste.

Some root vegetables such as carrots and beets respond beautifully to pressure canning.

Winter squashes can up beautifully too. You pressure can them in peeled cubes. (The necessity of peeling it first makes you suddenly realize a hidden reason for butternut squash being amongst the most popular winter squashes: because it’s a breeze to peel compared to most other winter squashes.)

That being said, other vegetables such as green beans and asparagus — their texture does change a great deal, of course.

Those of us who were used to, say, pressure cooking green beans on high for 3 minutes are shocked to see 20 and 25 minute processing times for them.

The processing almost makes them a whole other vegetable because the texture and taste of these two vegetables does change.

But remember you don’t just have to eat home canned vegetables heated plain in a microwave and dumped on a plate (though many people like them that way with some butter on them.)

Many canners who are also “gourmet” cooks suggest to regard home canned vegetables as “ingredient” vegetables in your soups, stews, risottos, casseroles, etc.

With simple ideas, it’s easy to perk up how you serve home canned vegetables. For instance, chop an onion or some shallots, fry till golden in some olive oil or duck fat, add some finely chopped garlic and some thyme. Put home-canned carrots and home-canned  green beans in a strainer to remove liquid, add them to the frying pan, and add a splash of white vermouth or lemon juice and gently heat them through with the fried onion. Delicious! Almost instant gourmet from a jar on a weeknight!

See the Cooking with Canning section of this site.

The canned versions don’t displace the fresh versions in your life. You can still toss fresh asparagus stalks in organic Tuscan olive oil and lemon and char them on the grill, and buy fresh green beans and enjoy them crispy and smokey in a stir fry with toasted sesame oil. The canned versions just become another trick in your cooking arsenal.

Which canned vegetables are borderline quality?

As for turnip, rutabaga (aka Swede) and parsnip — whether they are “good” home canned or not remains a personal preference and opinion. They too can taste much more of themselves when canned, which invariably means “much stronger.” Depending on the variety of turnip or rutabaga (Swede), they may also darken considerably.

To be clear, there are official pressure canning recommendations for them; it is “safe and authorized” to can them.

Confusion was caused a few years back when the Ball Blue Book deleted the procedures with no explanation, and everyone thought they were suddenly unsafe.

The reason actually was that too many people didn’t like them canned. Ball just got fed up, likely, with the complaints and so deleted the directions. The directions are back in the Blue Book as of 2013, but Ball still cautions about the quality of home canned rutabaga, while Bernardin (2013) cautions about the quality of both rutabaga and parsnip.

With home canned vegetables, you are looking at a dream-pantry of super convenience foods: asparagus, peppers, squash, turnip, parsnip, okra, ready to use and toss into recipes with no shopping, peeling or chopping required.

If you have jars of home canned carrots and home canned squash, you have a very tasty combined Squash and Carrot Mash  just minutes away. Just drain well (freeze the broth off them for soups), add some low-fat sour cream or yoghurt, season with some nutmeg, ground rosemary, etc, mash, heat through and — a delicious mash that otherwise would have been a good hour’s worth of work at least, which is why you usually only see it at Thanksgiving or Christmas. (Some canned turnip can also be nice in this.)

TIP: When you open home canned vegetables, you instantly have free vegetable stock that is as rich in taste as it is in nutrients. Save the liquid in tubs in the freezer for your next soup or sauce making sessions.

See our recipe section on Cooking with Canning.

What vegetables can’t you can?

Many of the recommendations were actually developed in the 1930s and refined in the 1940s during the Second World War, when the US government felt that home food canning was a national security issue that was worth the investment. Most of the research was done using methods that are still current today, and so well-documented that the scientific validity of the research still stands.

Recommendations for certain vegetables might not exist for the following reasons:

To be clear, there are no safe known methods of canning or pressure-canning on their own as plain vegetables in a jar the following vegetables:

Zucchini and celery can be used as ingredients in other tested pressure canning recipes such as mixed vegetables, chili, soups, etc, when the recipe calls for them. 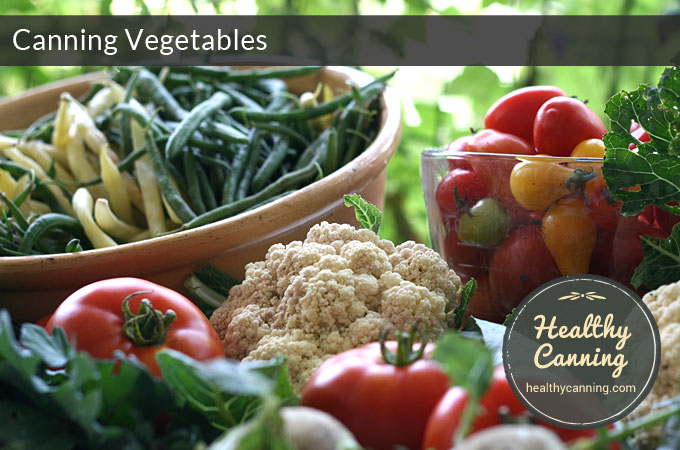 So the real hold up on certain veg is….?

Frankly, the real hold-up on certain veg is just money — the funding for proven, 190% safe-for-everyone recommendations to be developed.

It’s possible a safe processing method could be arrived at to can celery. Wouldn’t that be handy, in 250 ml / 1 cup jars just ready to open and toss into a soup, a taco meat mix, a risotto? Some people want to do it, because there are guesses on the Internet for pressure canning celery — but they are just guesses.

If you want the USDA / NCHFP to test and authorize more types of vegetables for pressure canning, let your elected representatives know that you want funding in this area boosted a bit.  (Governments are going to spend your money on something — they’re never going to knock on your door and hand some back — so you might as well try to see it gets spent in an area that actually benefits you.) Or, start a crowd-source funder to provide the NCHFP with funding for a project to get your dream vegetable tested for home canning.

Use only the recommend jar sizes (or smaller) for safety:  [3] “Use only jar sizes recommended for each vegetable.” Bernardin Guide to Home Preserving. Toronto, Canada: Bernardin Ltd. 2013. Page 102 If you use a smaller size than called for, you still have to process for the time given for the next size up that there is a size for. Consequently, there’s no safety issue in using a smaller size, but things such as beets for instance in very small jar might be softer owing to the greater heat exposure they got.

You can’t use a jar size larger than the largest one for which a processing time is required.

When packing vegetables into a jar, keep in mind that while some vegetables will shrink owing to water loss, a few will expand. The old Kerr book noted:

“What vegetables expand instead of shrink during processing? Corn, peas and lima beans.”  [4] Answers to your canning questions. Kerr.  Question 74, page 51. 1948. Accessed March 2015.

It is generally recommended to not try to can leftover vegetables as the quality is said to be unpalatable afterward.
There would also be density issues. The vegetables would be far denser are being fully cooked, than the lightly-blanched ones that the canning recipes were developed for.