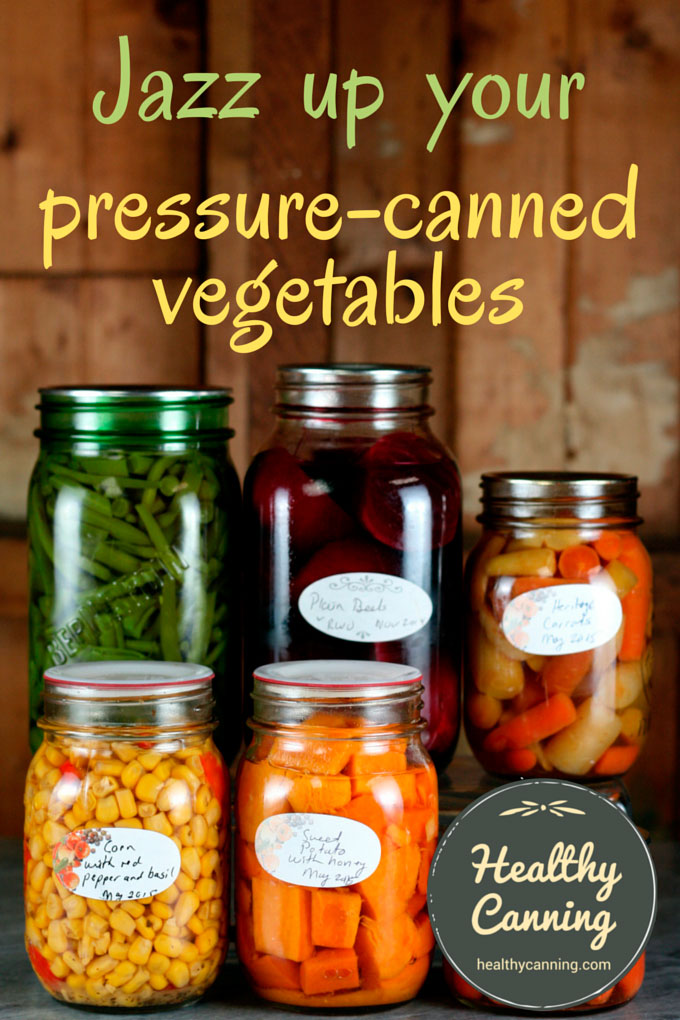 There are easy ways to safely jazz up your pressure canned vegetables and still remain within the vital safety guidelines set by the USDA.

Depending on the vegetables (carrots, green beans, tomatoes, beets, etc) that you are pressure-canning, you may wish to consider adding any of the following to your jars:

You can pressure can any custom mix of vegetables you desire, provided that:

Barb Ingham at the University of Wisconsin says,

You may create vegetable mixtures as long as there is a tested recipe for each vegetable that you are combining and you follow the processing time for the vegetable that has the longest time listed.”  [10]Ingham, Barb. Play it safe when preserving vegetables. 29 June 2015. Accessed June 2015 at https://fyi.uwex.edu/safepreserving/2015/06/29/safe-preserving-play-it-safe-when-preserving-vegetables/

The Ball Blue Book gives the following rule of thumb for doing this:

A “few sprinkles” of lemon-zest. That means about ⅛th to ¼ teaspoon; you wouldn’t want much more than that taste-wise anyway.

A bay leaf is very nice tucked into a jar of vegetables to be pressure canned. (One or two people have said they consider a bay leaf flavour too strong for them; they may not have been using real bay leaves, see separate entry on Bay Leaves.)

Barb Ingham at the University of Wisconsin says it’s fine to add 1 clove of garlic per jar, if desired: “You may add a small amount of garlic (up to 1 clove per jar) to canned vegetables without impacting the processing time.” [12]Ingham, Barb. Play it safe when preserving vegetables.

Sage is generally reported to have too strong a taste after pressure-canning. The report emerged by 1936, but there’s no record of anyone actually trying it since then. See “Can you use sage in home canning?”

When you use alcohol for flavouring, such as Grand Marnier or Cointreau with carrots, no alcohol will likely actually survive, because sadly alcohol evaporates before water even, but, it’s the concentrated flavour you are after. Don’t go nuts with the alcohol. The suggestion here is not for half a mason jar of booze; at most 1 to 2 to 3 tablespoons per ½ litre (1 US pint) of food product, only for flavouring. Instead of alcohol, you could try a tablespoon or two of lime juice if canning tomatillos or jalapeno peppers, or of lemon juice for other vegetables such as bell peppers, etc. Note that that quantity of citrus juice has zero preservative capability in pressure canning and is for flavour only. Note though that citrus juices (lime, lemon or orange) may cloud the water inside the jars somewhat. This is the advantage of clear liqueurs such as Grand Marnier and Cointreau, which impart flavour invisibly.

Aside from their Red Onions in Honey and White Wine recipe, [13] Ball Blue Book, 37th edition, page 116, Ball generally steers clear of even a drop of alcohol in their pressure canning. Perhaps this is not surprising, given the Baptist etc. religious background of customers they would have served in the American south. Bernardin is a bit more liberal in its use of alcohol as an ingredient, which also is perhaps not surprising given the French background in Canada.

Note that aromatic vegetables such as celery and onion aren’t on any authorities list of what you can just add as “optional list” flavouring. Nor are fresh herbs.

When trying a bit of lemon zest, dried herb, or cinnamon stick in a home canned food product for the very first time, consider trying it in just one or two jars, and in very light quantities. Putting Food By says,

Where flavorings usually included in such recipes are omitted, it is because some herbs and spices produce an unwanted taste after pressure-processing… Use your seasonings lightly because such flavorings change during canning and storage.”  [14] Hertzberg, Ruth; Greene, Janet; Vaughan, Beatrice (2010-05-25). Putting Food By: Fifth Edition (p. 182 & 194). Penguin Publishing Group. Kindle Edition.

The reaction of the safe canning police to such suggestions above will vary. You will get ideologically rigid, and you will get reasonable.

A client called and wanted to know if he could can meat with a more tender result by adding some red wine vinegar in place of all water for the liquid… although adding vinegar will not make this product become unsafe, we do not recommend that consumers modify the recipes in the USDA Complete Guide to Home Canning.”  [15] Penn State Extension. Canning Meat With Added Vinegar. Accessed January 2015 at https://extension.psu.edu/food/preservation/faq/canning-meat-with-added-vinegar

With respect, it could be thought that it’s that kind of knee-jerk negative response about something which is patently safe that could be responsible for many people giving up on the authorities and turning to Wild West canning sources.

The refrain of government agents is “don’t get creative”, but it’s futile: throughout history preserves have always been used as a creative outlet, and you aren’t going to change that.

Like so many other art forms preserving — in either, salt, sugar or vinegar — was born out of necessity but was then transformed by imagination into a means of self expression and pride for housewives who had few other creative outlets. Preserving the harvest became an often competitive outlet for wives as they vied against each other in local fairs showing others their prowess in the kitchen.”  [16] Brown, Marion. Pickles and Preserves. North Carolina: University of North Carolina Press. 2002. Foreword.

A more reasonable approach seems to be to provide safe outlets for the creativity, because it won’t go away with the wag of a bony finger. When it comes to population health, the modern thinking is that a harm reduction approach is often best.

Exceptions to the rule of never change anything in a canning recipe.

…always follow a USDA tested and approved recipe. You can always add dry ingredients, like dry red pepper flakes, or maybe cinnamon to apple sauce, or maybe something else to add some flavour, but always use dry, using fresh changes the pH…”  [19] Jessica Piper. Video: Canning Lids 101. 25:34 . Accessed March 2015 at https://ball.yourbrandlive.com/c/lids/. 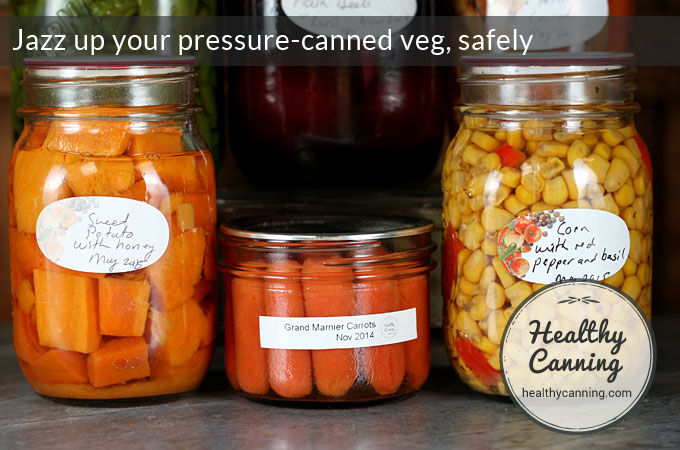